In my former blog, I have talked about the severe 1356 earthquake of Basel. Some 6.2 to 6.4 on the Richter scale, as Laubscher, 2006, says. We have seen the presumed destructive impact of the earthquake in the southern Rhine Rift valley, based on historical reports. 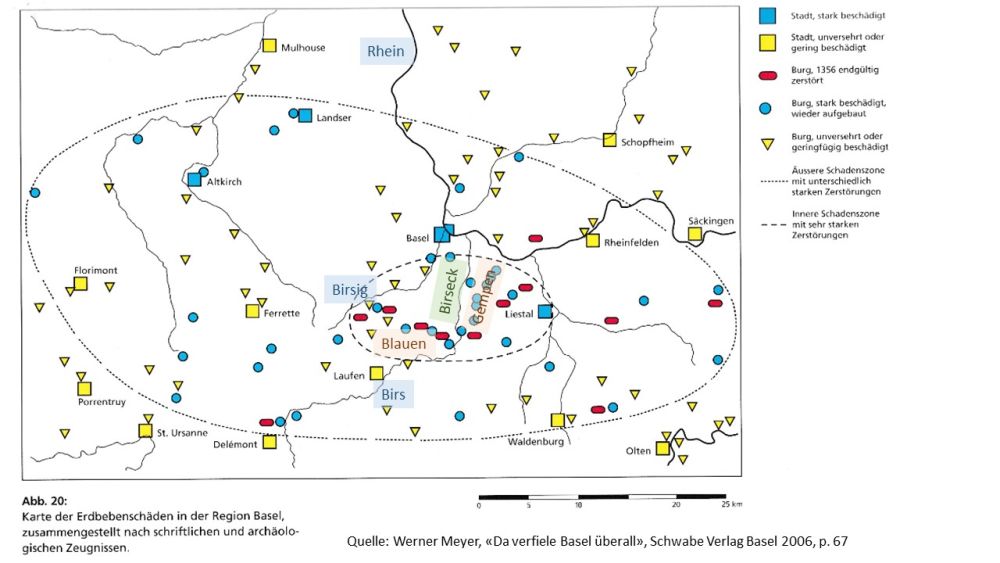 Red denotes castles destroyed and not rebuilt and blue shows castles or cities strongly affected, but rebuilt. Yellow are minor destructions or none, always according to the historical reports analyzed.

To understand more of the geological facts causing the earthquake, let us follow up on these questions:

A glance at the southern end of the Rhine Rift Valley, around Basel

Basel is located at the southern end of the Rhine Rift valley. To get a feeling for that, let us first have a glance at four photos.

(1) Looking north from the eastern end of the Blauen Chain (Eggfluh), we can see the Birseck with the Gempen Plateau to the right and the Black Forest in the background.

(2) Now we are on the Gempen Plateau in the Tabular Jura (Tafeljura near Hofstetten) and look westwards across the Birseck and the hills of the Sundgau, up to the faint blue line of the Vosges (Vogesen), with the highest peak being the Grand Ballon (France).

(3) Here I am in Germany on the foothills of the Schwarzwald/Black Forest (Markgräflerland) and look south at Basel, with the Gempen Plateau to the left and the folded chains of the Jura in the middle background, including the Blauen to the right.

(4) The fourth photo I took from the Remel at the western end of the Blauen looking northwards across the Sundgau to the Vosges (France). Basel is at about 20km to the right (east). 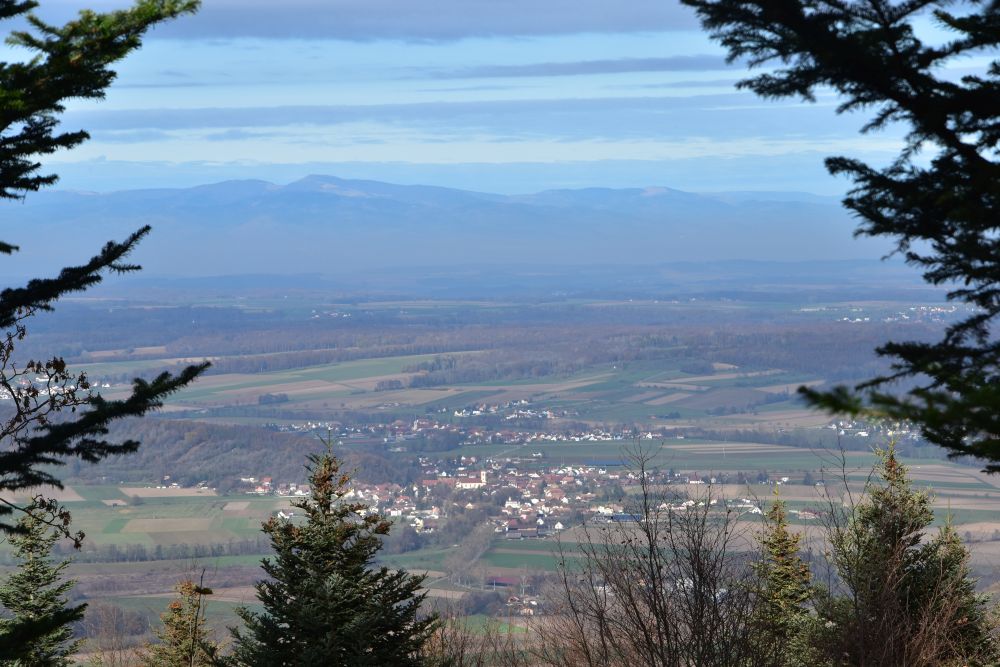 Yes, Basel is located at the southern end of the Rhine Rift Valley, surrounded by hills and mountains.

How did the Rhine Rift Valley come into existence?

The Rhine Rift Valley emerged long before the unfolding of the Alps and the Jura unfolded. This is a simplified description.

The four stages overlapped in time.

Source: My owns drawing to grasp the verbal descriptions on https://www.regionatur.ch/Orte/Naturraeume-Flusslandschaften/Oberrheinische-Tiefebene (very much simplified)

What is peculiar about the southern end of the rift valley (around Basel)?

The Rhine Rift Valley ends some 20kms south of Basel. The trough formation turned left (westwards) to form the Belfort gap and to continue as the Rhône-Saône Rift Valley up to the Mediterranean.

The Dinkelberg and the Tabular Jura (Tafeljura) belong to the Black Forest, and they are lower. When the trough formed, their sediments bent down forming the so-called “Rheintalflexur” and more such flexures arose such as the Landskronflexur. 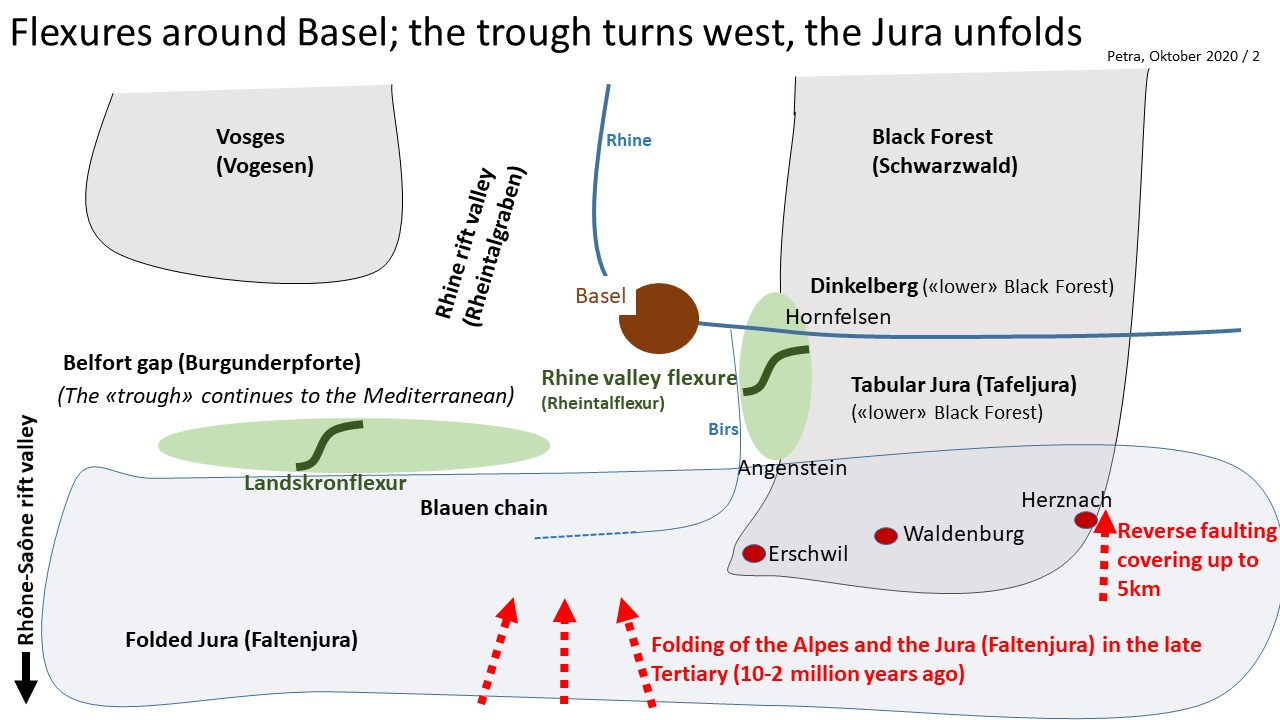 Source: My own rough drawing to understand the descriptions on https://www.regionatur.ch/Orte/Naturraeume-Flusslandschaften/Oberrheinische-Tiefebene (very much simplified)

Later, 10 to 2 million years ago, the Alps and the Jura Chain (Faltenjura) were unfolded, and they covered part of the “old” Tabular Jura by some 5kms. This is called “reverse faulting”.

The Alps and the Jura were unfolded, when the European plate slid under the Adriatic/African plate. This is a simplified model of the collision of the two plates.

Laubscher points out that the plate border is not a “straight line”, but it stretches along 2000km, from the Atlas mountains in Africa to the Alps; Basel lies at the northern edge of this plate border “zone”. The convergence is still going on today: The European Plate pushes from North West and the Adriatic/African Plate from South East.

So, what might be the cause for the seismic activity around Basel and for the 1356 earthquake?

Let us recall the controversy I came across about the reasons of the earthquake of 1356 (as stated in my former blog):

Laubscher presents this map of the rift valley, along with the fault lines he is aware of and the pressures going on.

As I understand Laubscher’s explanations, some fault lines such as the Rheintalflexur have been caused by the emergence of the Rhine Rift Valley (150-200 Mio years ago), but some other fault lines are much older, from 250-280 Mio years ago; at that time another earlier rift valley emerged (so called “permo-carbon trough”, see also Huggenberger), leaving “older” disturbances such as the Mandach-Monbéliard and the Mont-Terri. Laubscher says that the (older and newer) fault lines around Basel can be reactivated under new pressures.

The convergence of the European and the African plates is such a “newer” source of pressure (see the arrows showing the pressures executed by the plates). Still today, the plates converge at 8mm/year. Most of this convergence is currently being absorbed south of the Alps, where the seismic activity is much higher than north of the Alps. The Rhine Rift Valley fault lines and the older disturbances (such as the Mandach-Monbéliard or Mont-Terri lines) are areas of weaknesses that can react, when the tectonic plates of Africa and Europe rub against each other. Laubscher believes that this was the reason for the earthquake in 1356: The lesions around Basel reacted to the convergence of the tectonic plates (p.212). As a matter of fact, the pattern of damages reported historically pretty much follows the (older) Mandach-Monbéliard and Mont-Terri disturbances. In case the destructions reported historically are not complete and there were more destructions north of the “Meyer’s ellipse”, then the Rheintalflexur with its north-south orientation could also have made their contribution, as Laubscher points out.

On the geological map, arrows indicate the pressures along the Mont Terri Line and the Rheintalflexur. There is convergence (double arrows facing each other) as well as some sideward pushing (single arrow). The complex pattern of pressures is due to the fact that the convergence of the European and the African plate does not act at a right angle upon these fault lines. This makes predictions about seismic activity expected around Basel difficult.

While Laubscher says that at Basel severe earthquakes happen less often than south of the Alps, “less often” does not exclude another serious earthquake to happen again. In 660 years, the geology has not changed that much, when I think of the millions of years that count in geology. As my mum, the geologist, had rightly pointed out to me, when I was nine years old.

Well, I am not a geologist and I may not have consulted the latest research results. I have interpreted the sources I had at hand, and the basic story with the tectonic plates and the faults activated by their rubbing against one another causing earthquakes makes sense to me.

Due to the pandemic of this year 2020, I will continue to walk mostly around Basel in the next months. It is amazing, how much I discover so close to my home. I intend to follow up on the geological evidence of the flexures around Basel. What I also always find amazing, are all these border stones along the hiking paths and in the woods that tell us about the world history that the area around Basel was part of. Being confined at home opens the eyes for what is so near.

About 660 years ago, Basel was hit by an earthquake. With 6.2 to 6.4 on the Richter scale, it was one of the strongest earthquakes that we know of in Switzerland, perhaps even the strongest.

At primary school, I first learnt about the earthquake of Basel

It was at primary school around 1960 that I first heard of the earthquake of Basel. In our “Heimatkundebuch” (book about local history and geography), we wrote down the poem that describes the year 1356 in medieval German interpreting the Roman numbers (MCCCLIIIIII).

This translates to: A ring with its thorn, three horseshoes selected , a carpenter’s ax and some jugs, at that time Basel was destroyed all over.

It was not so much the earthquake that damaged the city, but the subsequent fire, caused by open fireplaces in the houses and by burning candles in the churches (Werner Meyer: “Da verfiele Basel überall”, Schwabe Verlag Basel, 2006, p. 54f). This is how I imagined the fire devastating the city, when I was about nine years old. 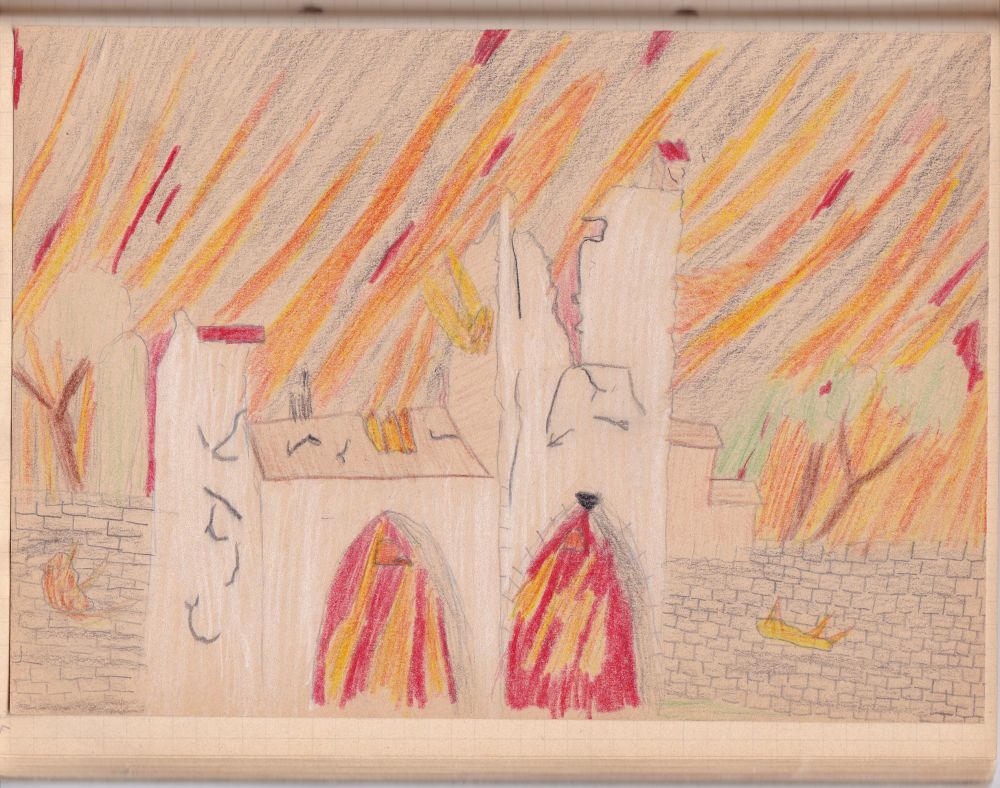 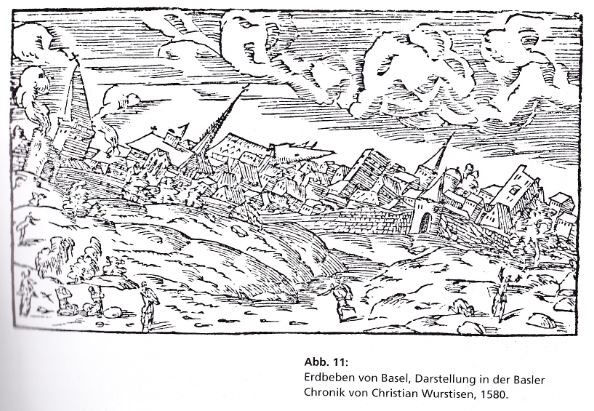 I remember that our teacher reassured us: “This earthquake happened centuries ago. Today nothing like that will occur again.” I returned home and told my mum about the earthquake and that she should not worry about it, as it will not happen again. My mum, being a geologist, frowned at me: “Come on, the geology here is still the same, such an earthquake might happen again, any time.” Not very reassuring for me, but my mum was right. And she did not like untrue statements.

The earthquake made a deep impression on me. I felt with bishop Johannes who, on the way from Delsberg to Basel, visited the damaged castle of Pfeffingen and was able to find his godchild safely protected under two blocks of stone. Our teacher read the story to us and we summarized it in an essay for our “Heimatkundebuch”. This is my essay, also full of phantasy. 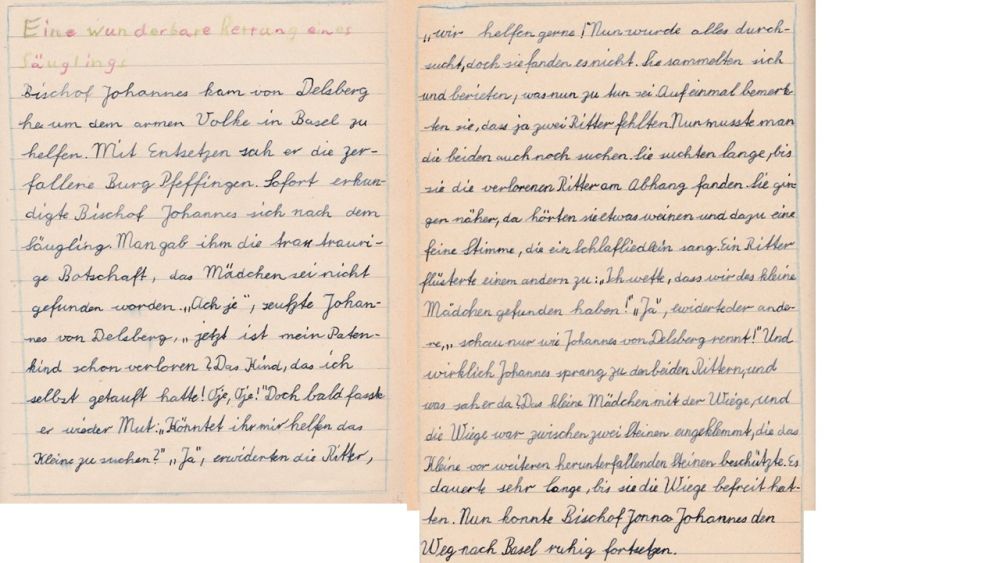 Was this a legend? No, there is historical evidence available. Immediately after the earthquake, the prince-bishop of Basel, Johannes Senn (1335-1365), rode from Delsberg (or perhaps from St. Ursanne) to Basel, stopping by at the severely damaged castle Pfeffingen to participate in the rescue operation of his godchild (Meyer, p.113).

Here you can see the castle of Pfeffingen above the trees in the right hand foreground. Strategically well placed above the Birseck valley, it has been rebuilt after the earthquake. Across to the right is the Gempen plateau (with the greyish cliff lines). The blue mountains in the background are the southern Black Forest. I am standing on the Eggfluh that forms the eastern edge of the Blauen Chain and I look to the north.

I want to know more about the destructive impact of the earthquake and about the underlying geology.

The destructive impact of the earthquake – historical evidence

The damages reported formed an ellipse about 85kms wide, whereby the most severe damages occurred within a narrower ellipse about 45kms wide, the centre being south of Basel: In the Birseck, in the valley of the Birsig to the west and on the Gempen Plateau to the east; it is here, where the colours red (destroyed and not rebuilt) and blue (heavily damaged and reconstructed) dominate.

What might have been the reasons for the earthquake of 1356?

To understand more about this controversy, I will check some geological facts in my next blog.