In November 2019 we travel in France and Spain. It is now beginning of December and we are on our way back home. On the way starting from Valence, we visit Roman-sur-Isère and stay overnight at Annecy.

Romans-sur-Isère – founded by Barnard de Romans who gave his name to the city. In the 19/20th century it was a center of shoe production

From Valence we drive north east and find signs pointing to Bourg-de-Péage and Romans-sur-Isère. No, no, we do not want to take the motorway, we do not intend to pay “péage” (toll) right now, we look for the “normal” road… but then we understand that Bourg-de-Péage is the sister city of Romans-sur-Isère, both bordering the Isère and connected by bridges such as this Pont Vieux or “Old Bridge”. 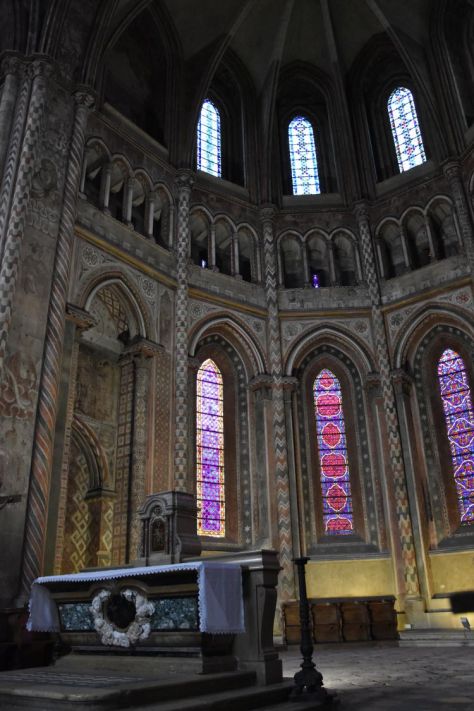 We find the tomb slab of Beatrix of Hungary. She was the mother of the last dauphin of his county Dauphiné, Humbert II. In Wikipedia I find, why the county is called Dauphiné and the count is called “dauphin”: In the 12th century their coat of arms showed a dolphin (dauphin in French). The count was nicknamed “dauphin” and changed the title “count” to “dauphin” or (in Latin) “delfinus”. The dauphin/count Humbert II had no successors. He decided to hand his county over to the heir of the throne of France, then Charles Valois. From now on, whenever a new heir to the throne of France was born, he received the county Dauphiné as a private property and was hence called “dauphin”. At the time of Humbert II, the Dauphiné was a fief of the Holy Roman Empire (how complicated, the son of the king of France reported into the German emperor). Only around 1500, the Dauphiné became French territory and the fleur de Lys was added to the dolphins on their coat of arms.

So – the mother of the last local dauphin, Beatrix de Hongrie (Hungary), died in 1354 and was buried in the Collegiate Church of Romans-sur-Isère and this is her tomb slab. 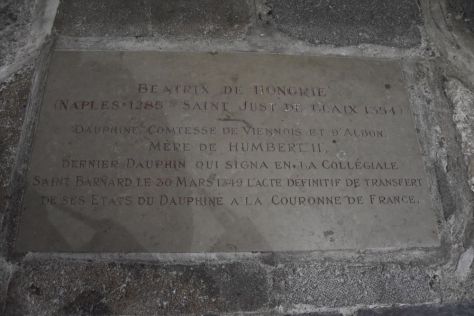 From around 1850 until in the late 1990’s, Roman-sur-Isère was an important center for design and production of shoes. The name of one of the famous designers is Charles Jourdan. The city cherishes the memory of their grand times by erecting giant shoes. This is a traditional model in red with a bow. 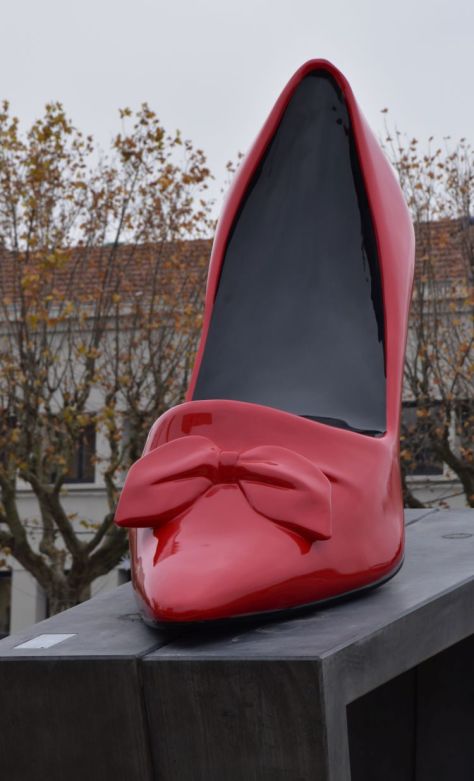 This is a more extravagant model with eyes and a mouth.

And this red-white shoe stands in front of the Tour Jacquemart.

There are shoe outlet shops in the city, now decorated for Christmas. 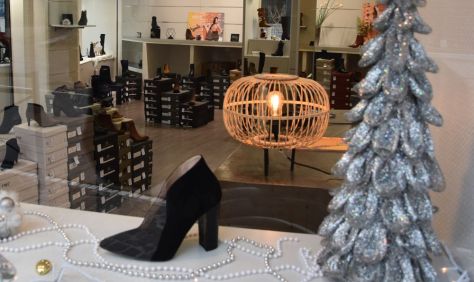 In addition, the people of Romans-sur-Isère are very proud of their three specialties: First Pogne de Romans are rolls made out of yeast paste with orange flavor. Second les lunettes de Romans are biscuits made from shortpastry (sablé, Mürbeteig), double layered, with marmalade in between, similar to the Swiss “Spitzbuebe” or to the Austrian “Linzer Augen“. Third Ravioles de Romans are tiny ravioli with a filling made from white cheese de Comté spiced with parsley. The “ravioles” have been probably imported by immigrants from the Piemont. We try them for lunch, and are disappointed that the grated cheese covers the fine taste of the white cheese filling. 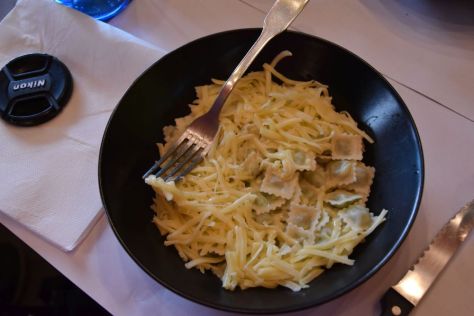 After lunch we continue our way to Annecy.

Annecy – discovering the lovely old city on islands at night

My first impression of Annecy is “people try to help, but accessing our IBIS hotel is difficult by car”. The reason: In the city center, there is both a Christmas market and a “normal” market with products of Savoy, and around our centrally located hotel, the streets were closed. After our third round, Ursula leaves the car and explores the area on foot. She discovers that we are allowed to access the parking Sainte-Claire next to our hotel by driving into the one-way street in the “wrong direction”; for all signs, market stands and people we have not seen the relevant “exception signpost” that would have directed us to the parking garage. Finally we enjoy the view of the river Thiou from our hotel room …

… and set out to explore the old city entering it through the western gate. 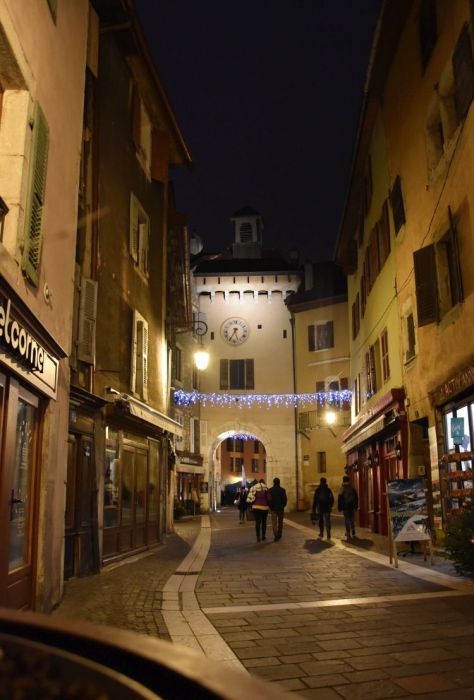 We stroll through the narrow streets and cross the river Thiou using the Pont Morens with the view of the western side of the Palais de l’Isle. 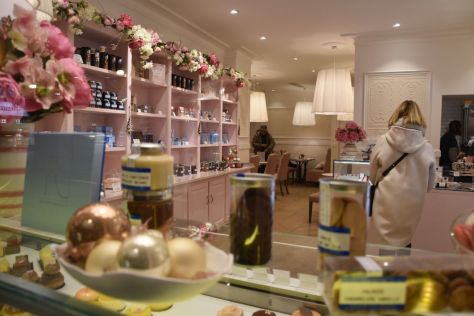 It is chilly cold and we decide to have a hot tea in the Péché Mignon with the inviting confectionery sign.

I wonder, why I find “Swiss flags” or “almost Swiss flags” – a white cross on red background – and I understand, the coat of arms of Savoy is very similar to that of Switzerland. 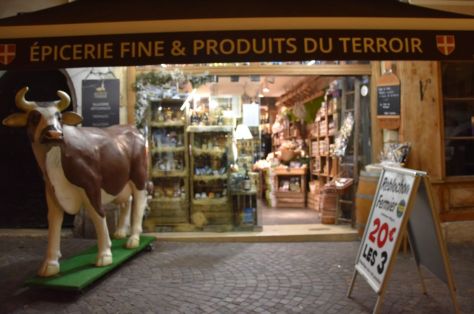 This shop sells products of the area, the cheese Reblochon being one of them. From Antony in Ferrette I had learned that Reblochon is a washed-rind cheese  (Rotschmierkäse) that is relatively mild. In the 13th century, the farmers who had to pay taxes on liters of milk obtained from cows stopped before having finished milking their cows. When the controllers and tax collectors had left, they clandestinely milked their cows a second time and obtained what they called “rebloche” in their local dialect. From the “rebloche”, they produced the Reblochon cheese. Only in 1860, when Savoy was integrated in France, the Reblochon left concealment and is now one of the registered regional trademarks, AOP (Antony, p. 47).

The market stands and the restaurants offer specialties of Savoy that often contain the Reblochon cheese. We decide to eat in the restaurant le Chalet near the Pont Morens. We have delicious perch filets (filets de perches) carefully fried in butter. They are the best filets de perches I have ever eaten. Around us, there is the smell of Fondue and Raclette which are not only Swiss, but also Savoy specialties. But there are some differences. For instance the Savoyards prepare a Fondue containing Reblochon. I will have to try that out, when back at home.

In the morning we stroll along the river Thiou…

… and this related channel.

The city reminds me of Venice, and it is sometimes called “Venice of the Alps”.

In Annecy the dogs say: “here, I have to be taken on the leash” – will the dogs convince their masters?

The galleries remind me of our capital Berne – very convenient for shopping in the rain.

The narrow streets open to the place Notre Dame with… 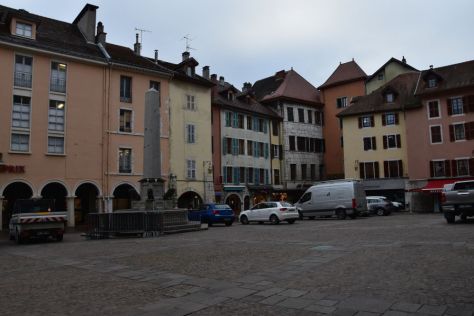 … the Église Notre-Dame-De-Liesse, reconstructed in the 19th century after having been destroyed in the French revolution to install the square of freedom (place de la liberté). Only the original belfry from the 14th century remained.

The fountain with the four lions was erected in 1859  by a man called Aimé-Antoine Levet who took the inspiration from Florence, where turtles hold an obelisk on the Piazza Santa Maria Novella.

Outside the city center with the narrow streets, we find a modern shopping center. The Christmas tree – built out of skis – reflects in the window. 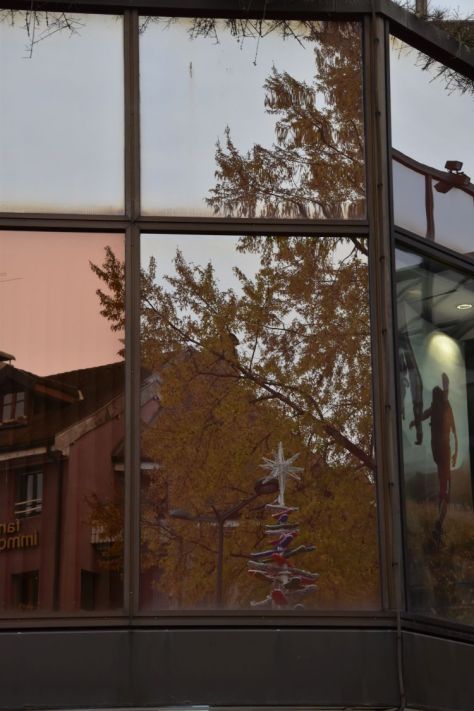 A kind of snowflakes decorate the shopping center inside – charming French phantasy.

The lake d’Annecy is not far from the shopping center. We find a mysterious atmosphere created by low hanging clouds. There must be mountains around this lake…

We turn back to the city center… 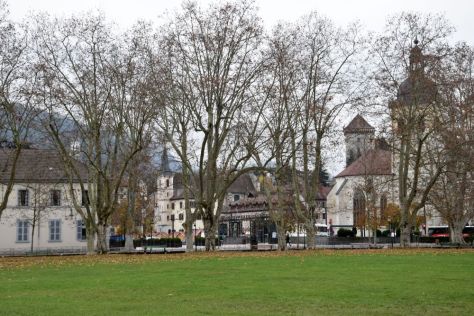 … and get to the island in the river Thiou, called Palais de l’Isle. The buildings on the island were formerly a prison and now they house museums. The building with the tower dates from around 1200 and the court of justice was on the first floor.

Across the Palais de l’Isle, men are working at the bridge “Rue Perrière”, perhaps something to repair or some more Christmas decoration to install. It must be wet for the brave man in high boots.

This is the northern side of the Palais de l’Isle with the former prison cells. 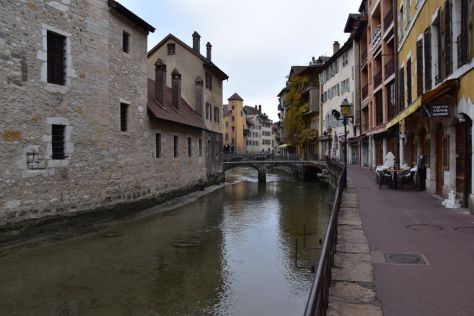 We look up to the castle…

… turn to the city gate…

… and say good-bye to Annecy that is also called the “pearl of the French Alps“.

My “old” Lonely Planet of France praises Annecy on p. 490: “the Vieille Ville (Old Town) is a ludicrously pretty ensemble of pastel daubed, geranium strewn houses…” – yes, I agree. The Lonely Planet then continues: “… Just look around you: The mountains rise steep, wooded and snow-capped above. Lac d’Annecy, so startlingly turquoise it looks unreal…” Mountains, wooded and snow-capped above? Now, we have seen nothing but clouds around Annecy. To see more of the mountains, we might have to return next year.

We return home to Switzerland. Five wonderful weeks discovering more about France and Spain are now history for us. Until next year!