In 2021, I was in Berlin four times. Once, we made an excursion to Lübbenau with the beautiful Renaissance castle of the noble family Lynar, now a noble hotel. 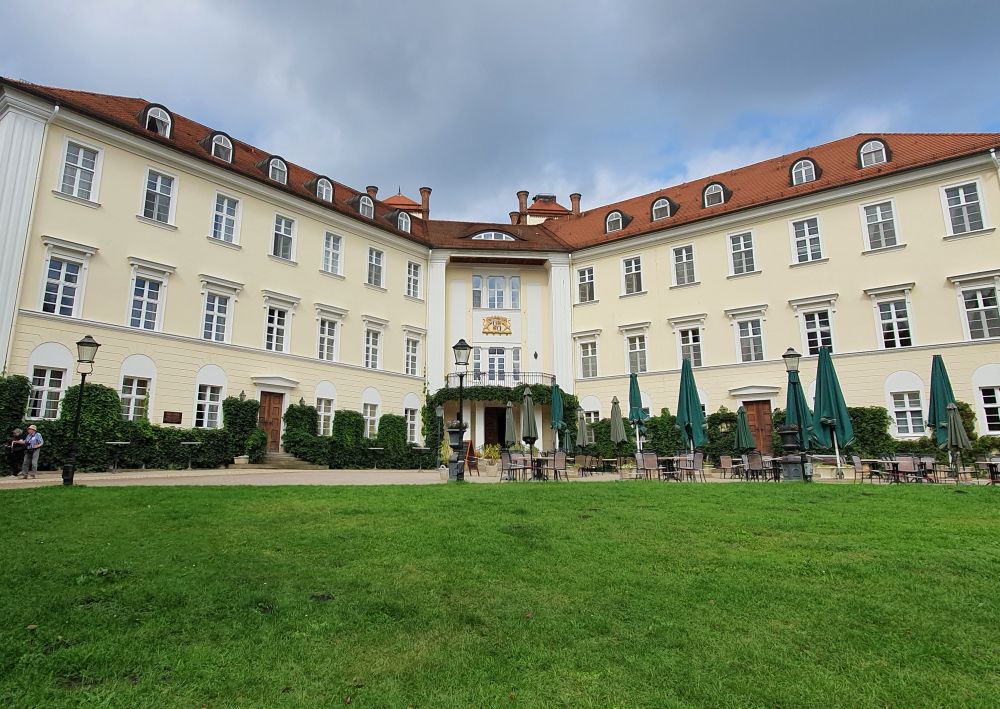 We find a boat that offers a comfortable two hour tour along the channels of the Spreewald to Lehde.

We pass under the bridges that I remember as obstacles for bikers, when biking in the Spreewald in 2019. 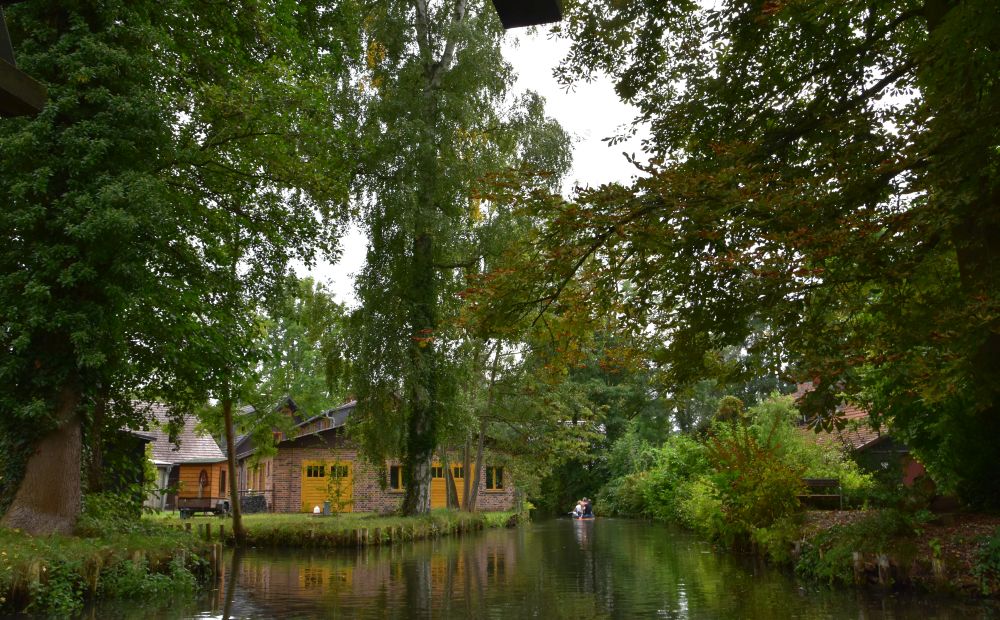 We fly along houses and are served refreshments on the way.

Paddling in your own canoe is common here. 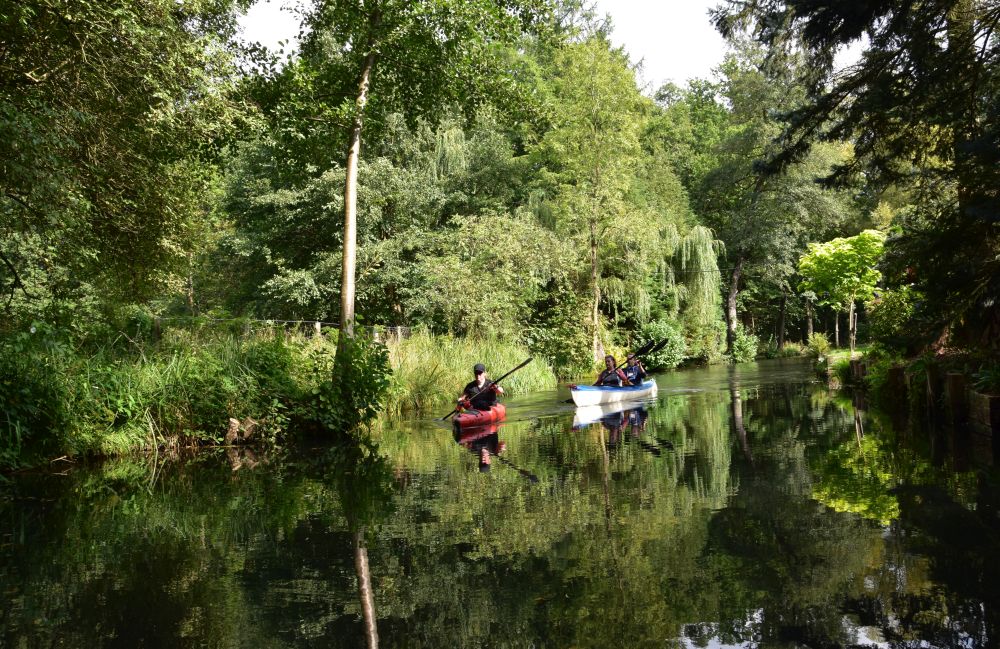 The trees reflect in the water.

More wooden bridges on the way. 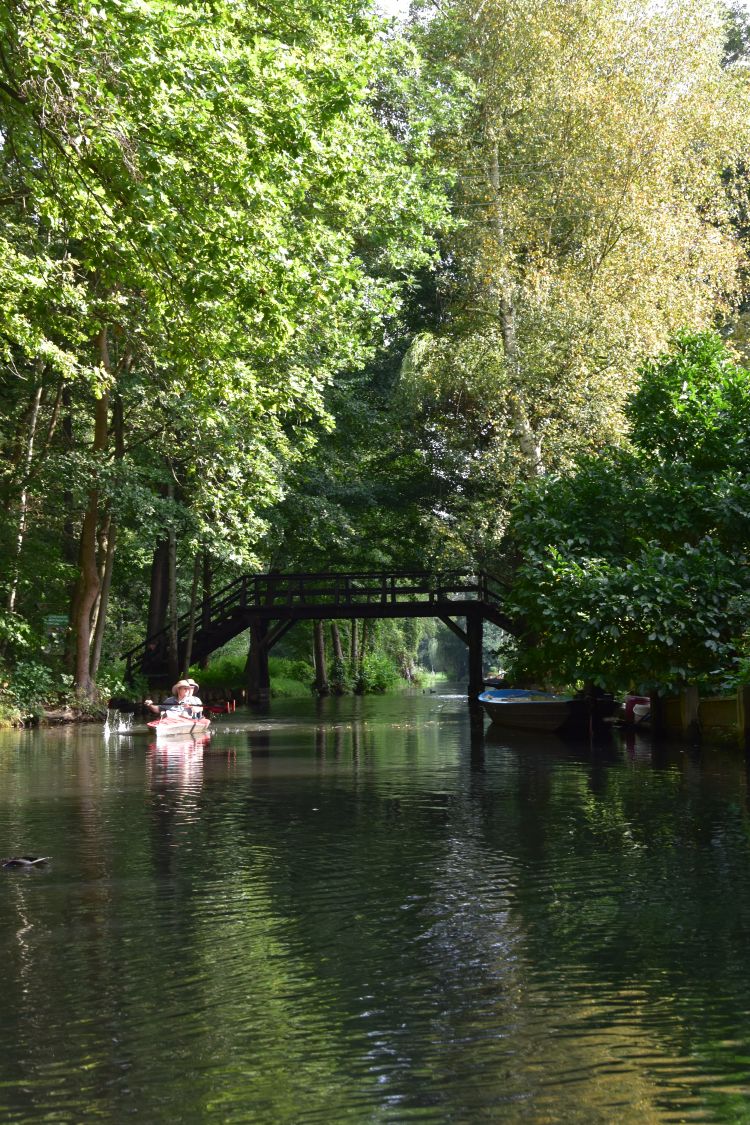 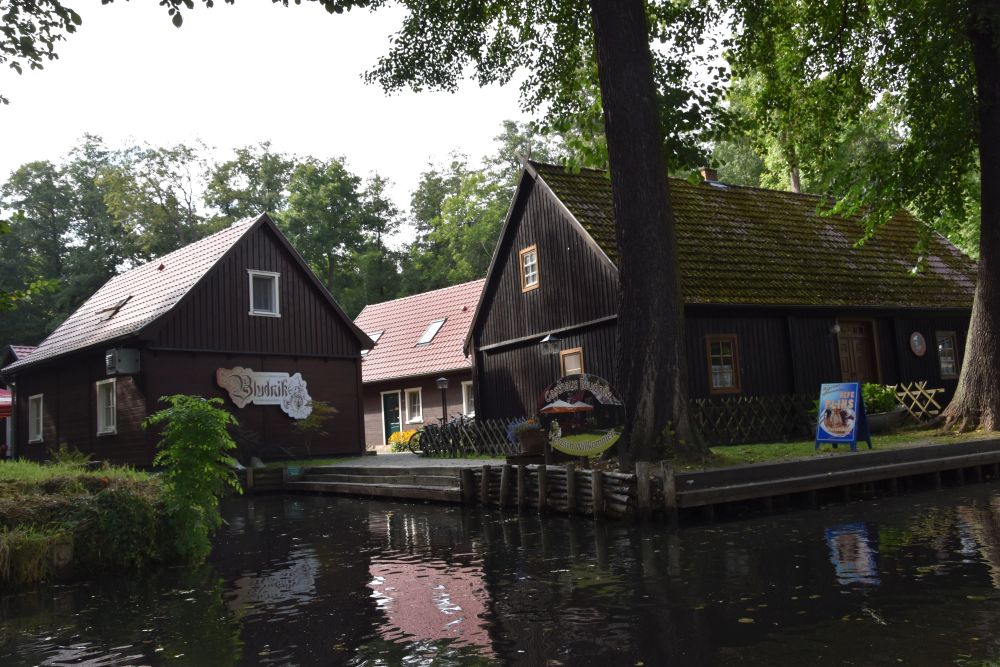 We are not the only guests here.

… or in the comfortable passenger boats. 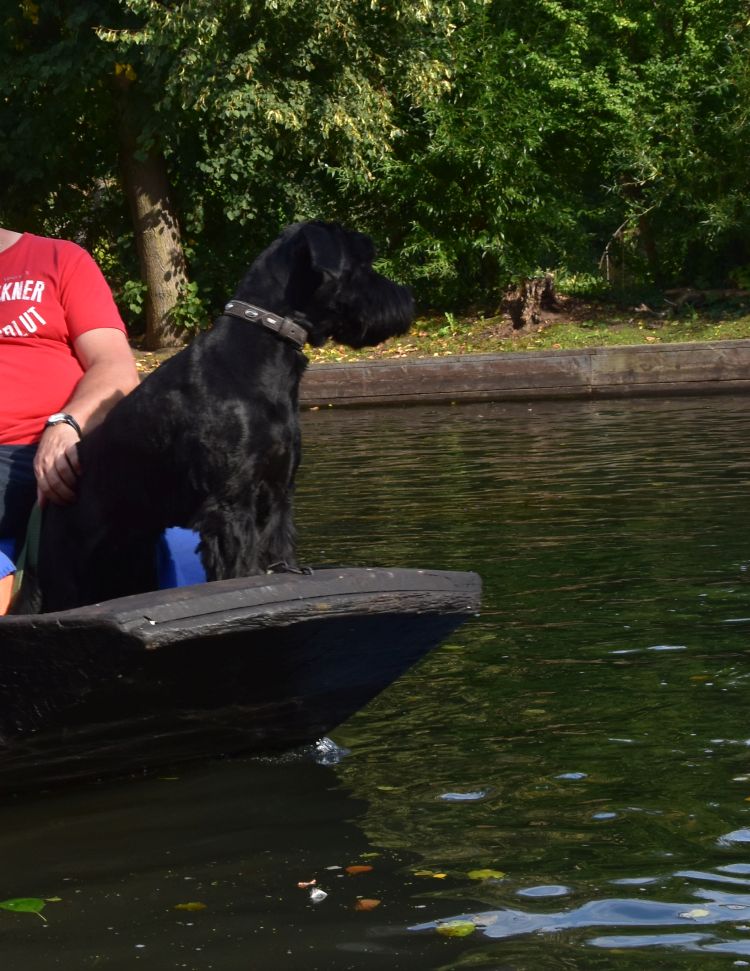 continue our way along lush gardens… 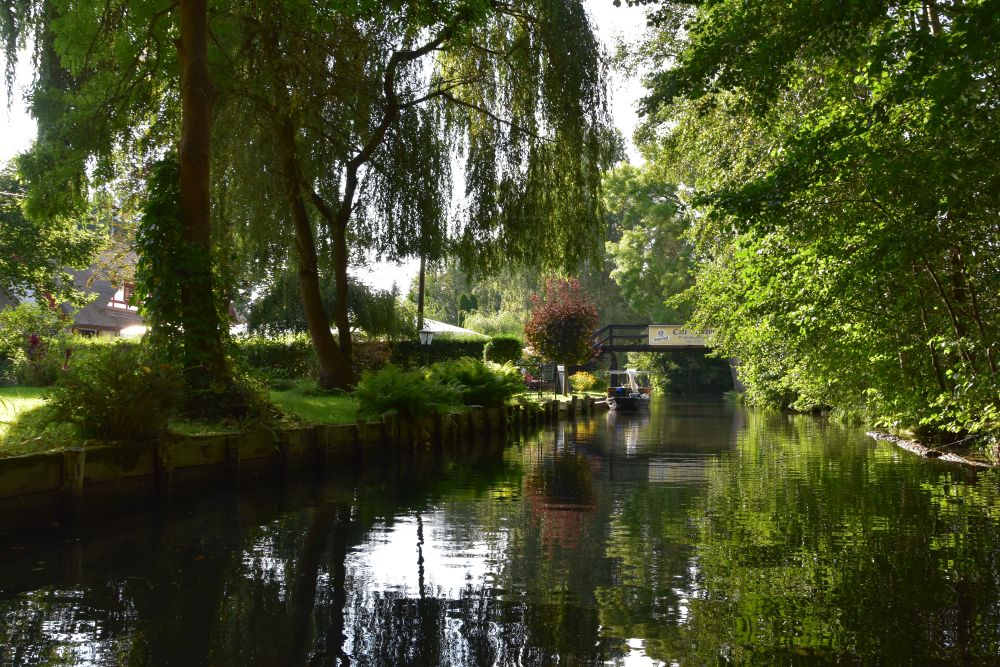 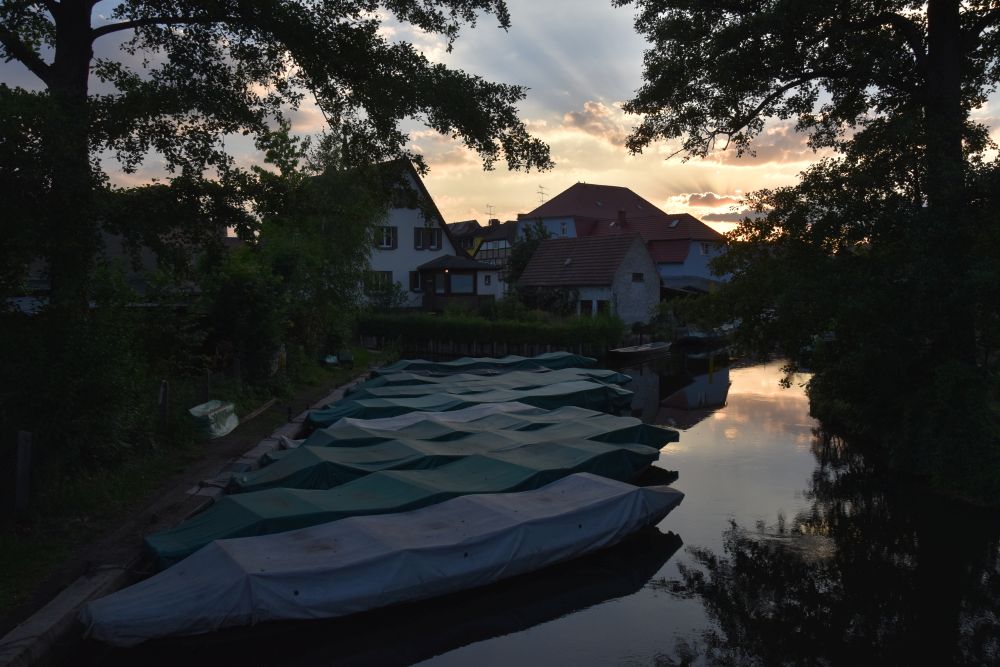 We take our car back to Berlin. I am happy to have given my brother-in-law an impression of the romantic Spreewald about 100km south east of Berlin.

In 2021, I visited my mother town Berlin four times, discovering new places, rediscovering known places and making observations with the twinkling of an eye. Let us look at some of my observations and twinkle with our eyes.

Once upon a time, this was perhaps a kiosk, where people could buy newspapers. Now two guys are hiding behind their newspapers reading them avidly. 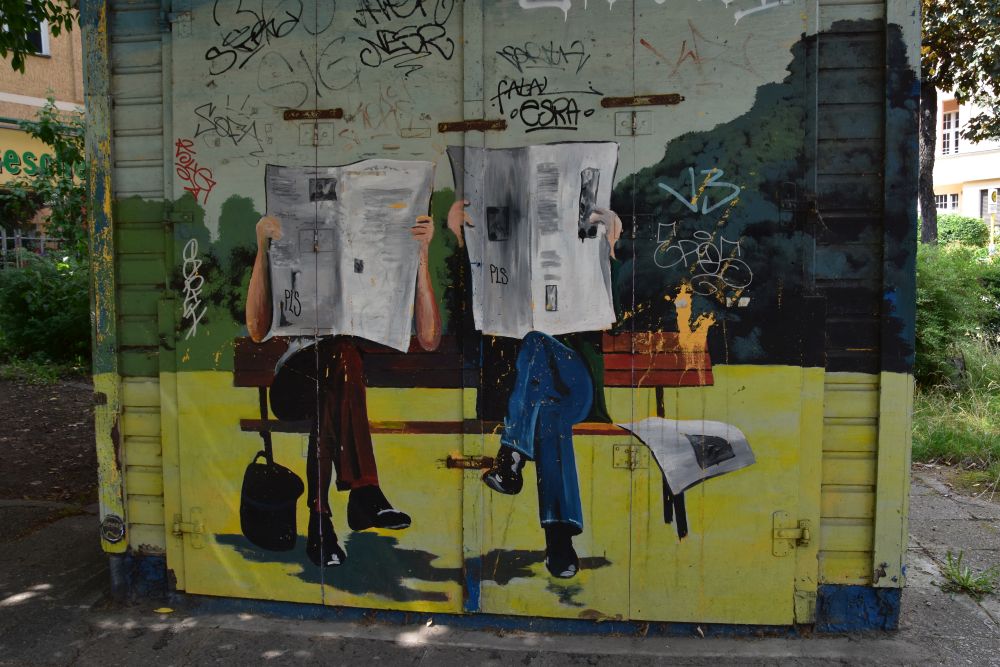 In case of Radlosigkeit find your Radhaus

The “Radhaus” sells “Räder” which are bicycles in Germany. Not far from this “RaDhaus” is the “RaThaus” (city hall) of Steglitz that the RaDhaus alludes to.

The owner of this RaDhaus being close to the RaThaus must be a genius in marketing. 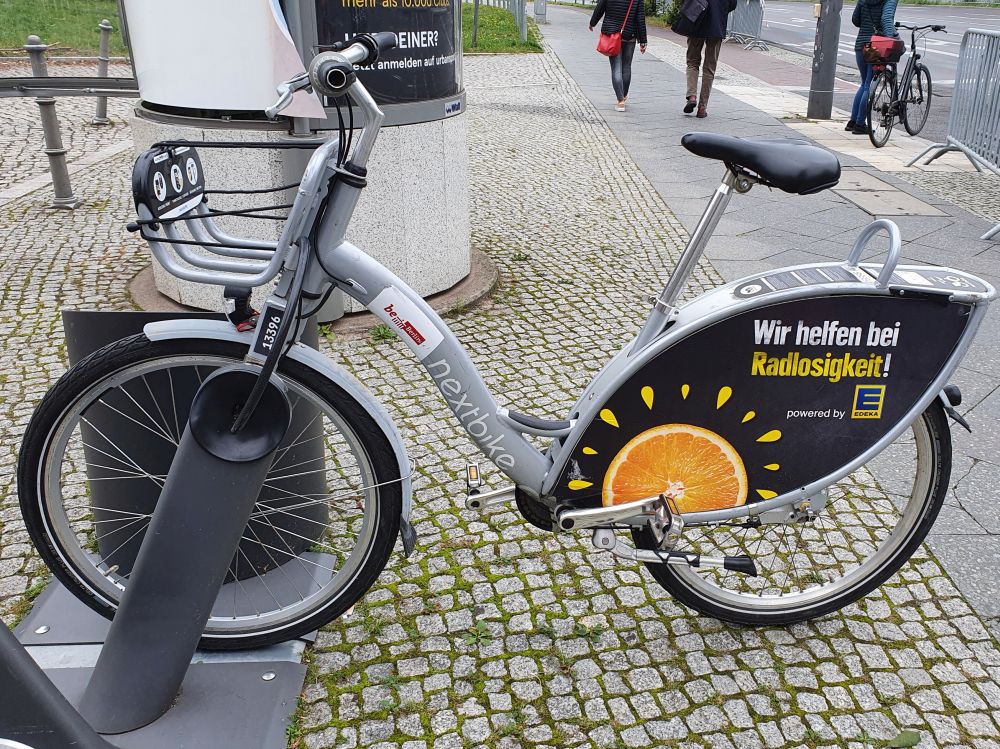 Just hire me and you are no longer “raDlos” nor “ratlos” translated to “without bike” nor “without advice”.

Does “a-petit” allude to Frederick and Voltaire or just to Asian Petit Tapas?

This restaurant at Prenzlauer Berg has an interesting Website: a-petit.de.

Voltaire answered with another rebus:

J a – or more in detail: “J grand a petit” which translates to “j’ai grand appétit”

In English, the invitation soberly translates to “come for dinner” which Voltaire accepts with the answer “I have a big appetite”.

When looking at the Website “a-petit.de”, I am no longer sure, whether the owner alludes to the rebus exchange between Frederick and Voltaire. The restaurant at Prenzlauer Berg is called “Asian Petit Tapas” shortened to a-petit. I would have to visit the restaurant to find out.

Elections inspire the phantasy of those who want to be elected

September 2021 was the time for elections in Germany and Berlin.

Those who want to be elected, mix English and German without hesitation. Is this the “new modern” of the younger generation?

The “old” lobby (as old as fossiles) – should disappear and give way to the young generation that will fight for a FAIRer redistribution of resources or for UmFAIRteilung (UmVERteilung = redistribution does not suffice). I frown at the “fossiles”, they must be younger than I am… And I wish luck to the younger generation. 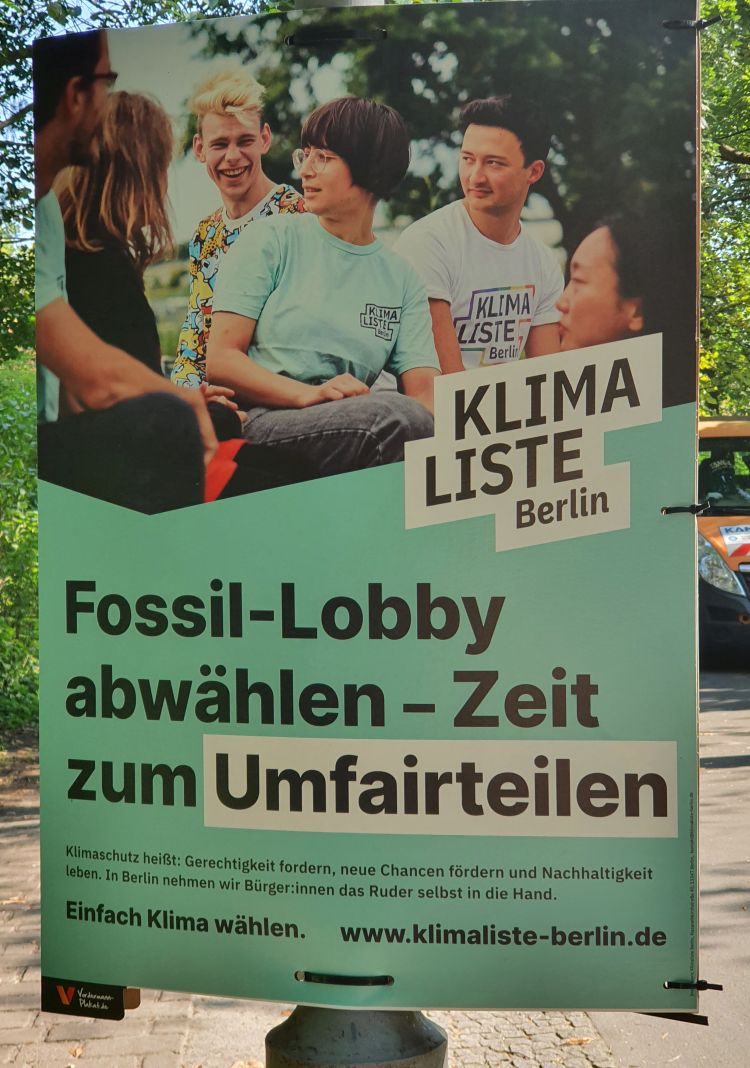 Even the Berlinese dialect (ick) comes mixed up with English (future): “Ick will Future”.  (“Ick” is Berlinese for the German word “ich” or “I” in English). 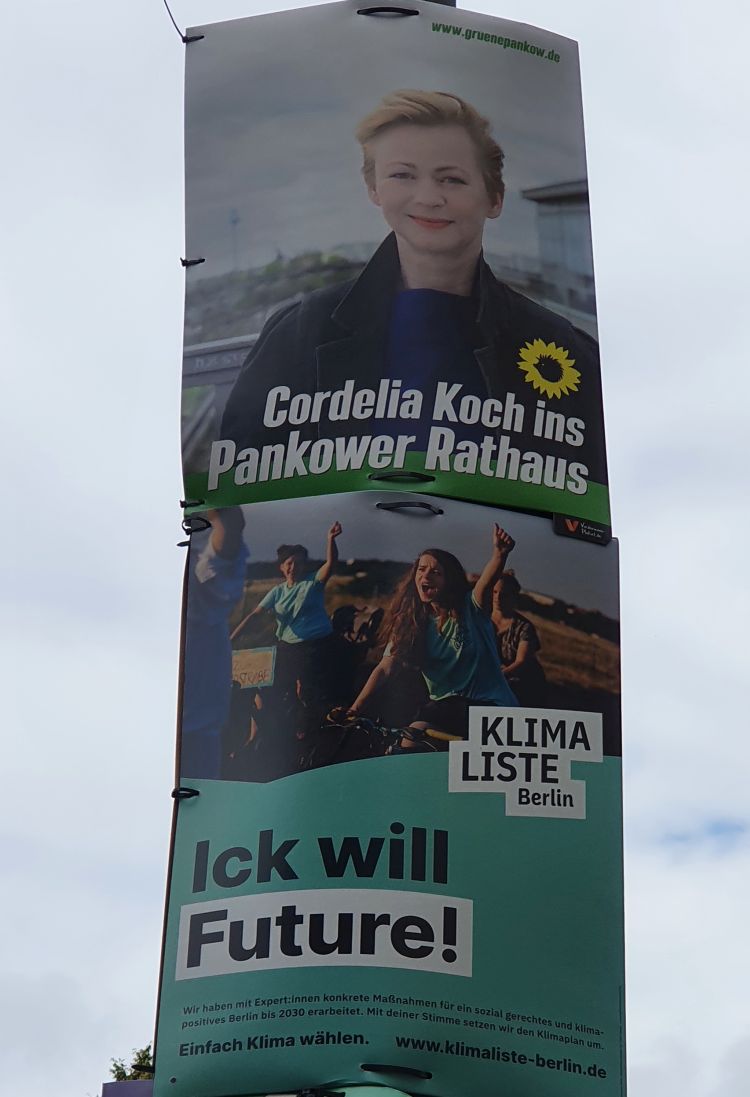 Ick verstehe det jut… I understand that well. It seems Cordelia Koch made it to the town hall of Pankow and I wish that her future materializes.

Near the Wannsee, I found this gate. “Einfahrt freihalten – Tag und Nacht” (“Please keep the entry free – day and night”), the sign says. The consequences are clear, your car will be carried away, when you park it here.

Looking at the rusty gate and the weeds and bushes behind it, I wonder, how long ago it was that a vehicle tried to enter or leave this wilderness. 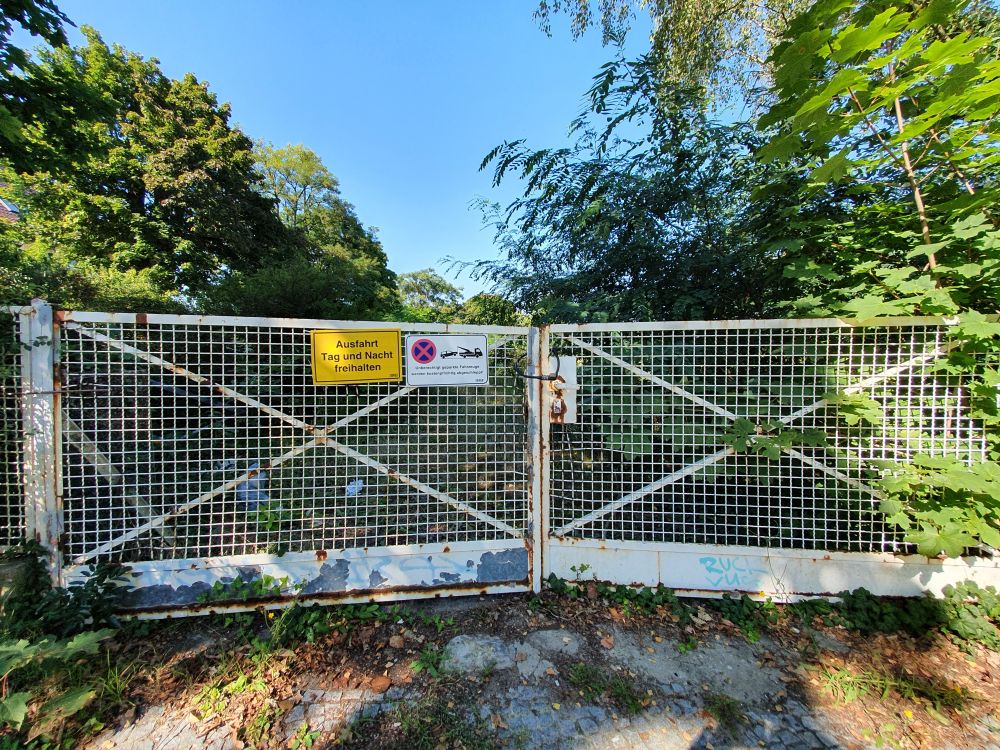 Also this gate, not far from here, seems not to have been in use for quite a while. 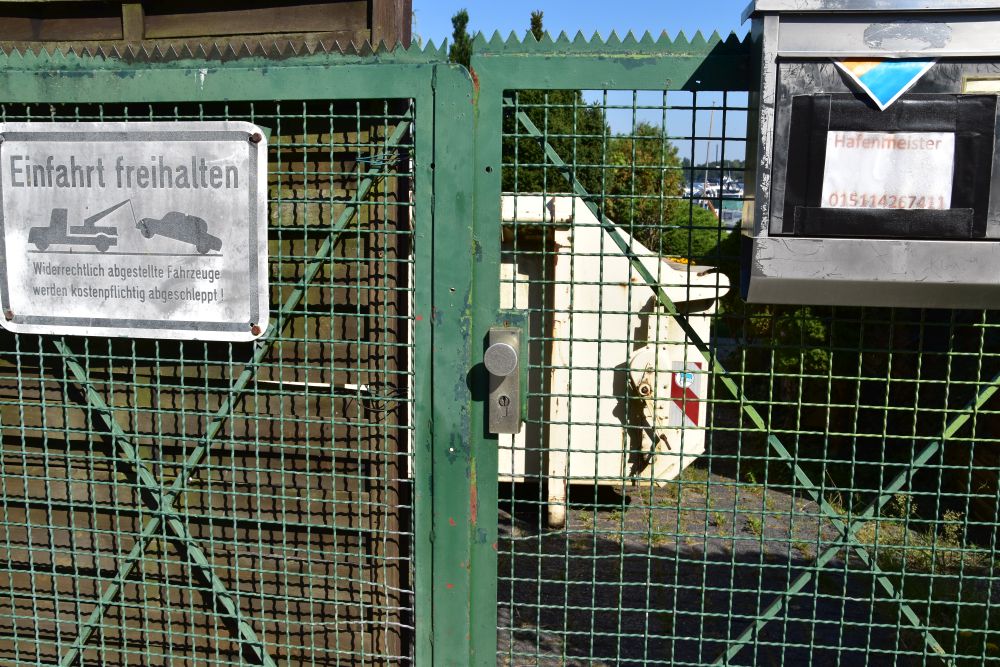 But also here – you have to keep the entry free.

In Switzerland, we say “Schritt-Tempo fahren” or “drive at the speed of walking”. In Germany, this order can be shortened to “Schritt fahren”, which sounds like “drive walking” to me. 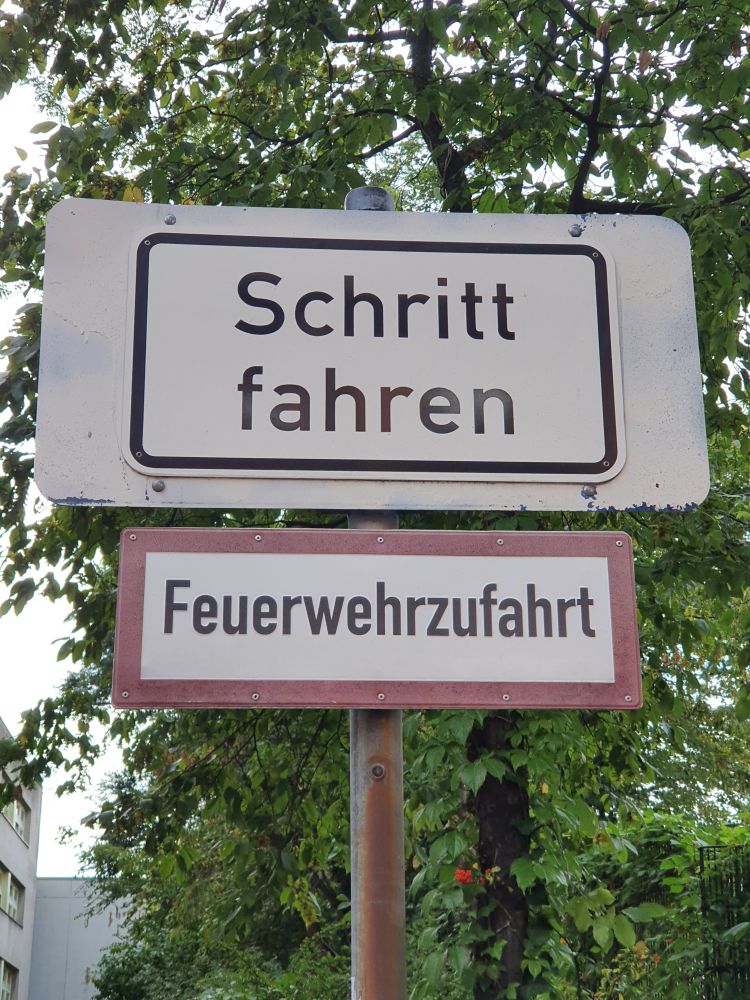 Cyclists seem to have a lot of phantasy to find places, where they can attach their bicycles, but beware, here, it is not allowed to do so! 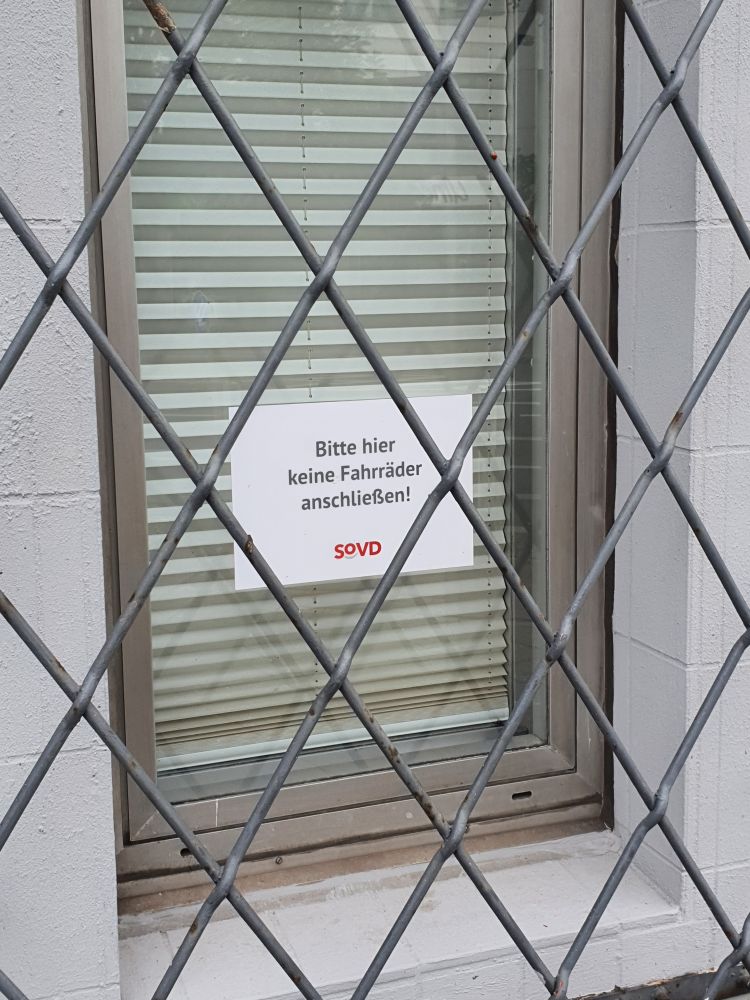 The Covid pandemic forces us to keep distance. Does Queen Elizabeth know that Berlin uses her corgis to illustrate the distance of 1.5m required – it is equivalent to 3 of her dogs. 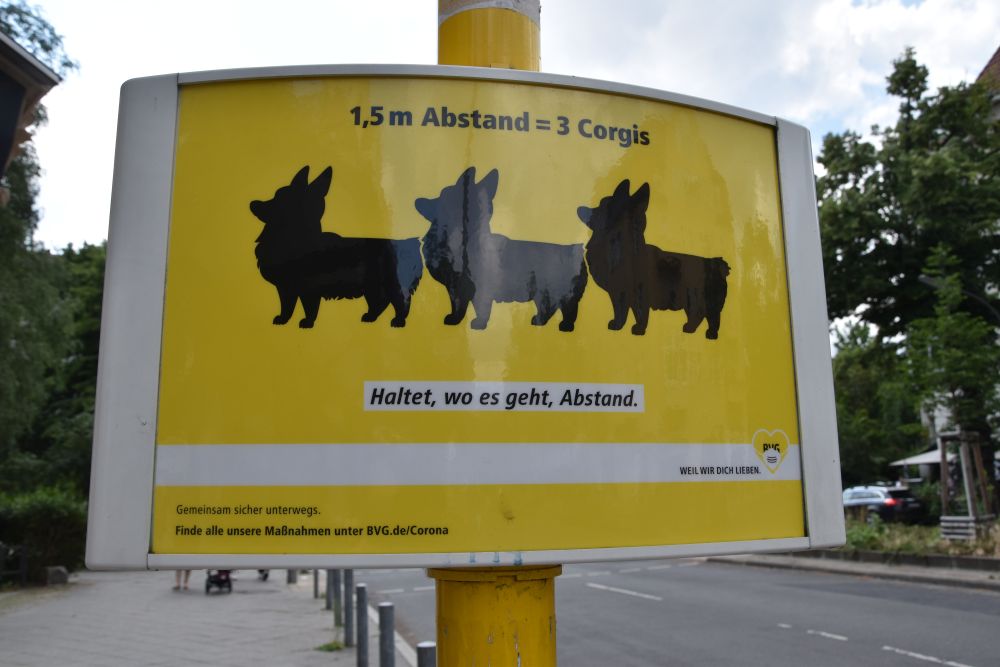 I do not believe that hippos walk in front of this garage, as the sign on the gate suggests. I just liked the illustration. 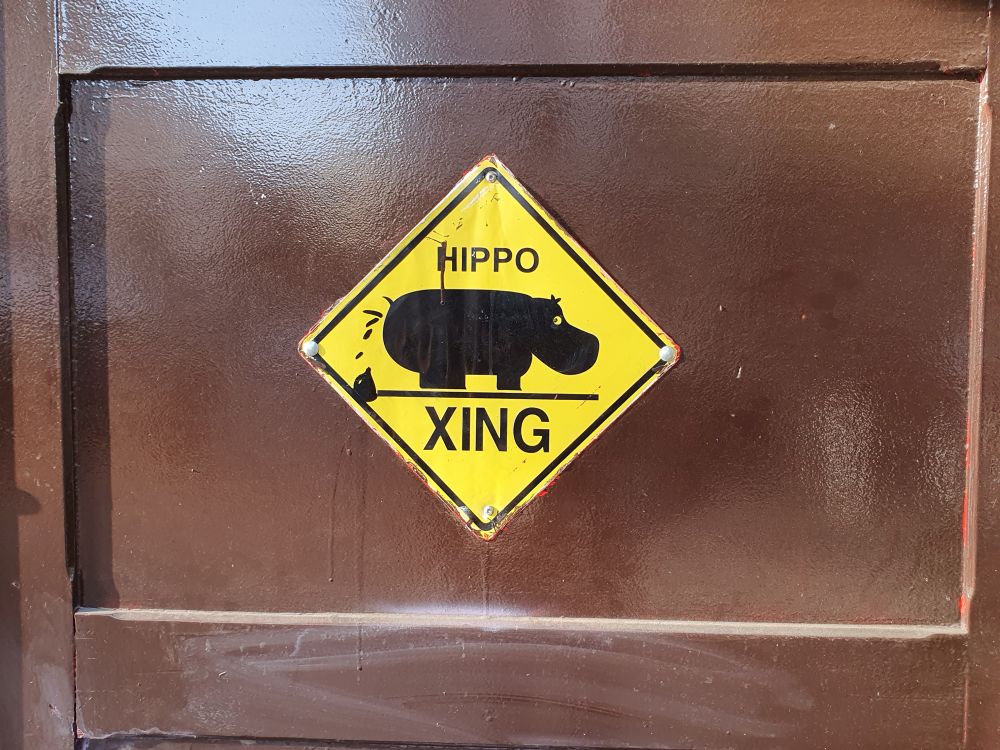 Two vehicles that made me smile

Furthermore – I have never seen such a tiny caravan before, and above that, it has been painted in such a friendly green colour.

There is even a devil wearing red pants on the side.

A wonderful city for happy dogs

Though Berlin is a wonderful city for happy dogs, not everything is allowed to them. However, what is prohibited, is prohibited gently: “All dogs (even the cute small ones) unfortunately have to remain outside”. This is, what this plate says that I found in Köpenick.

The city does a lot for their dogs. Not far from busy Schloss-Strasse, you have the option to drop your dog at the “Hundekita” (dog day school) of Mr. Perro.

Perhaps your dog will learn to bark in Spanish (perro is Spanish for dog). Or the dog will bark in English, because Jack Perro seems to have Anglo-Saxon roots, too.

Not far from here, dogs find coaching at the DogCoach Institute.

This “happiness” van takes dogs to the Grunewald, where, in the dog walking areas (“Hundeauslaufgebiete”), they are allowed to walk without leash. 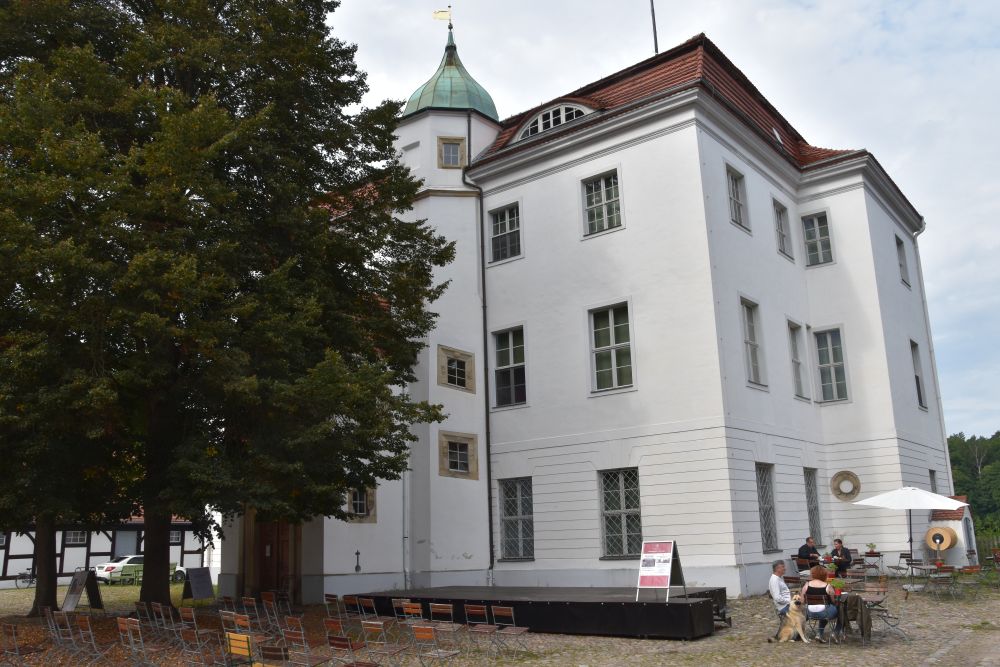 … with flavours delicious for dogs such as “liver sausage – apple”…

… offered in this deep freezer barrel. The dog ice cream has been handmade in Berlin, is assuredly fresh and tastes “awfully good”. You prove love for your dog, when buying ice cream for him. 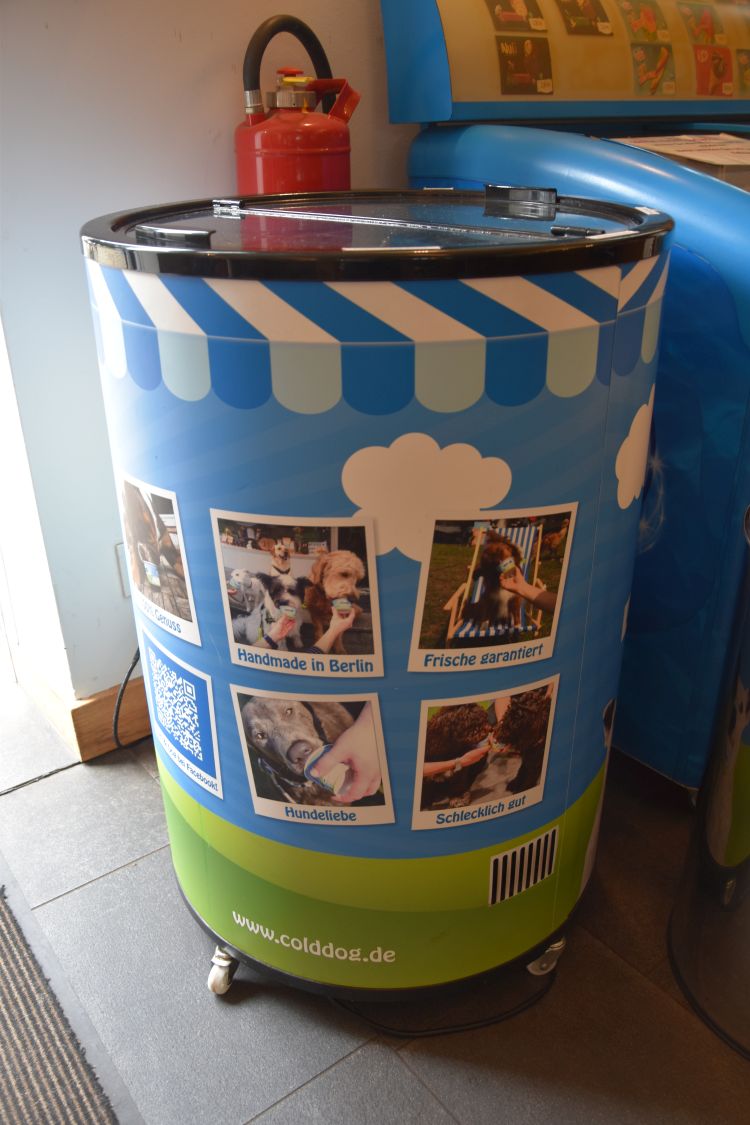 In addition, the dog sitters and other citizens have the option to eat healthy “Bio” curry sausages.

Never before have I thought of the curry sausage being healthy, but perhaps I should try this Bio alternative. May be, even a dog would like this healthy Bio sausage.

Fortunately, the Renaissance castle of Grunewald did not only have ice cream for dogs, but also this Pinot Noir “Preussen Premium” from Potsdam.

I shared it with a friend of mine after having walked through the Grunewald, and the wine was excellent. Yes, Brandenburg is also a wine region, and some of the wines are quite good.

End of August 2021, I am on the road to Berlin, via Slovakia and Poland.

My route begins in Slovakia: Bratislava – Trnava – Nitra – Žilina – Strečno and Terchová – Dolny Kubin, Podbiel and Tvrdošín. It continues in Poland: Wilkowisko – Kraków – Szklarska Poręba – Wroclaw, and now I am driving to Berlin, via Cottbus and Luckau.

From Wroclaw to Cottbus

The highway E65 from Wroclaw through Poland to Dresden is very busy; even on a Saturday it is full of trucks. I leave this busy highway to catch the E36 to Cottbus. The E36 is under construction. One track has been completed and provides two-way traffic. I reach Cottbus shortly before lunch time. I am in Germany now. No one takes notice of me at the border; I hardly notice crossing it.

From Luckau, I keep wonderful  memories. I had lunch at the Ratskeller in 2018. Now I take the detour to enjoy an excellent lunch again: Potatoes with curd cheese and linseed oil and, as a dessert, the sweet pancakes called “Plinsen”, both typical local dishes.

The restaurant keeper is still the same as in 2018; he has worked in Zurich and enjoys remembering his years in Switzerland.

The market square has undergone a thorough renovation to be a cosy place for pedestrians; …

… the red and white barriers are about to disappear.

The restaurant owner is happy that the works will soon be accomplished.

I continue my way to Berlin, my mother town. I arrive, feel at home and have another excellent dish, now at my favourite Vietnamese restaurant Viet Koch BBQ at the Breitenbachplatz.

I will stay in Berlin for about ten days.

In summer 2018, I visited Luckau with a friend of mine. Standing in front of the Ratskeller, we debated, whether we should eat here – it was lunch time. The owner heard us speak Swiss German and asked us in. He had worked in Switzerland for some years and he loved to hear our dialect.

We entered – what a good choice!

With our dishes we had a glass of local wine, Marbachs Wolfshügel. I had a mouthful – not more, as I was driving; we took the rest of the bottle with us.

After lunch, we strolled through the small town.

Just next to the Ratskeller is the Georgenkapelle (Chapel of Saint George, also called Hausmannsturm), built around 1200 in late Romanic style. Until the reformation in the 16th century, it was a chapel . In 1679 the tower was enhanced to 47m; it was now the seat of the city guard. Since 1969 the tower has been used as a festival hall. (Source: Information plate). 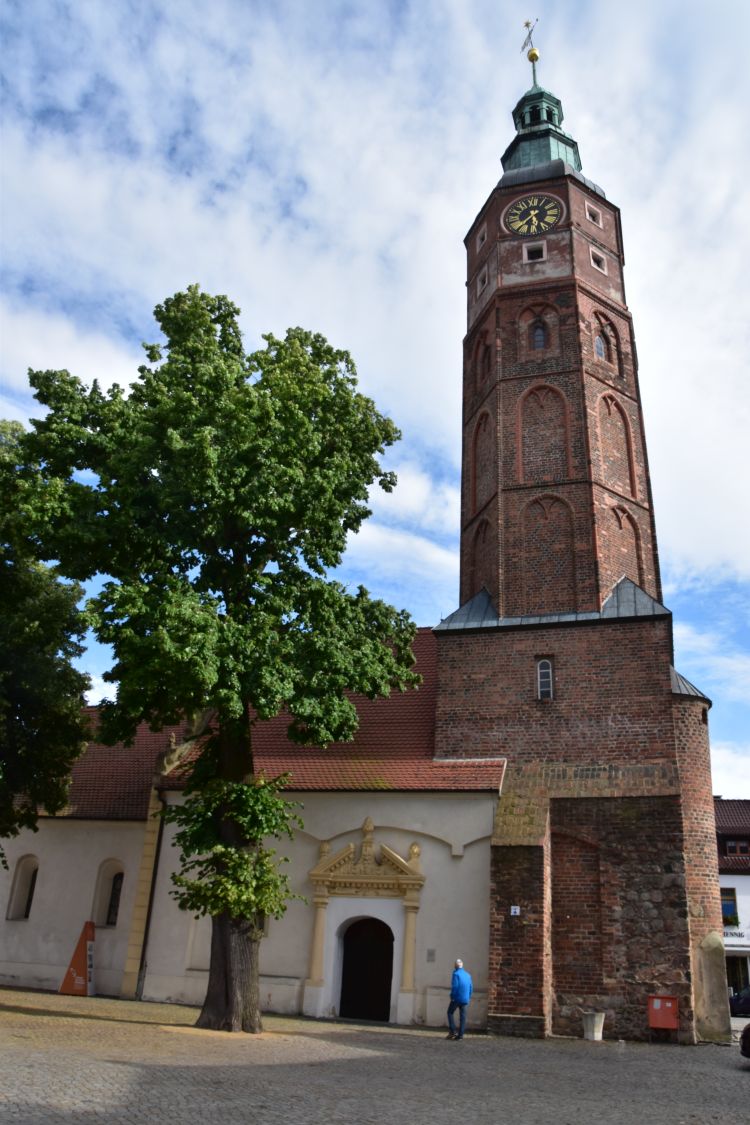 Building the church of Saint Nicolas (Nikolai Kirche) started in the early 13th century. After a fire, the church was rebuilt around 1400, in gothic style now. After another fire in 1644, the interior was renovated in baroque style (a rarity in protestant Brandenburg; source: Information plate).

The moat and the town fortification have been well preserved and provide a nice stroll around the city. 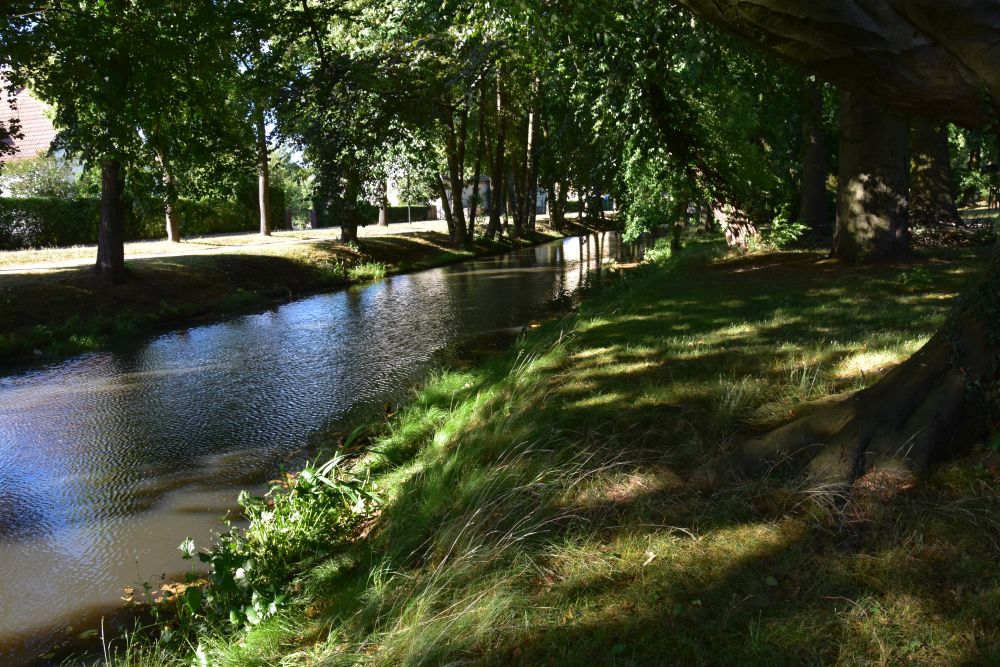 Luckau has an 800 year long tradition of growing wine that halted in 1926. It has now been reactivated. This is castle hill vineyard that was renewed in the year 2000.

Jürgen Rietze owns a vineyard west of Luckau. We met him working here. After the fall of the iron curtain, he learnt the wine business in the Stuttgart region. In 2005, he returned and started his own vineyard  in Luckau. In 2012, he was included in the wine guide of Berlin. He is proud of his vineyard – he points out that it is facing south. We frown. He laughs. Well, you, being Swiss, might have steeper slopes, here we are in Brandenburg, he adds. Yes, looking at the vineyard carefully, I can see, it is slightly slanting. I would love to try his wine, but he has no bottle for us right now.

Now, three years later, in 2021, I have returned to the welcoming little town Luckau, and I hope to return soon again with my long-year friend from Berlin.