End of August 2021, I am on the road again, to Berlin via Slovakia and Poland. My route: Munich, in Slovakia: Bratislava – Trnava – Nitra – Žilina – Strečno and Terchová – Dolny Kubin, then in Poland: Wilkowisko – Cracow – Szlarska Poręba – Wroclaw, and finally Berlin.

I stay one night at Dolny Kubin and visit two wooden articular churches and the Orvina castle known from Nosferatu.

Dolny Kubin – the centre of the Arwa valley – I sleep in a kitschy, very friendly and pricy hotel

Dolny Kubin is the centre of the Arwa or Orvina valley. I stay in the Koliba blockhouse pension for 33 Euros including breakfast. In the evening I have a delicious salad with hot goat cheese. 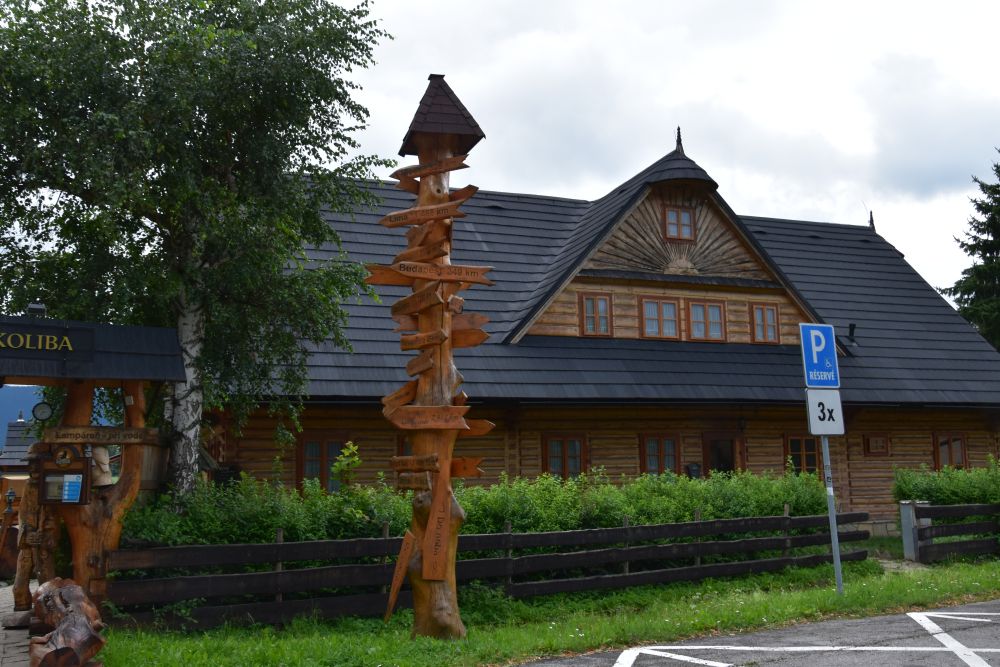 This hotel must be a kids favourite. It is convenient for families that rent whole huts (isby) here.

The central square of Dolny Kubin has been carefully set up as a pedestrian area. It is named after Hviezdoslav, as he was born here – I have met him before in Bratislava, where a beautiful square with many shady trees also carries his name. He was a poet and a translator of foreign literature. 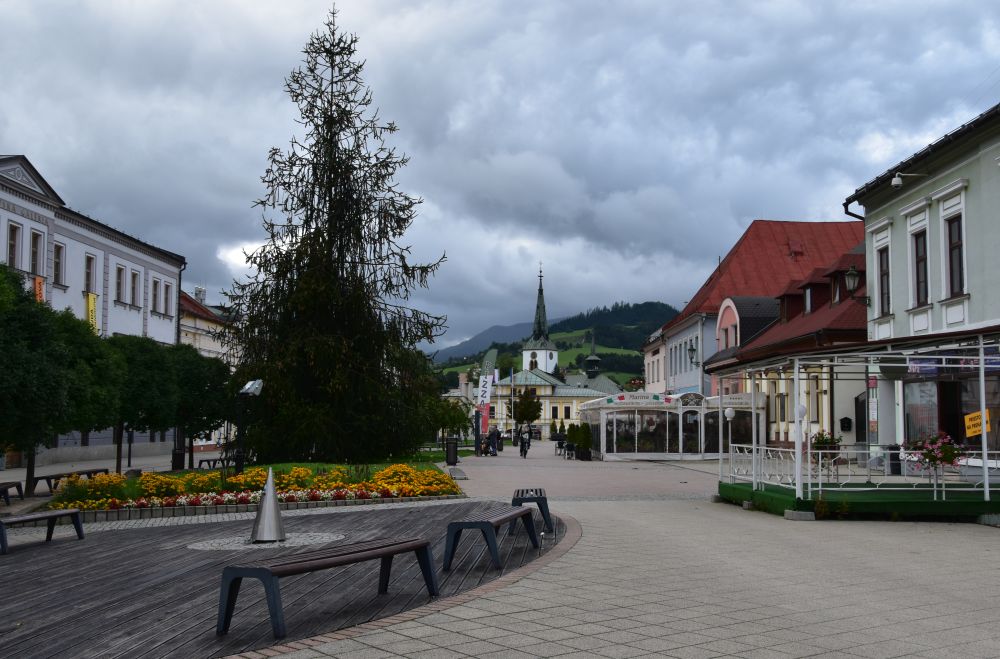 This is the evangelic church dominating the main square. 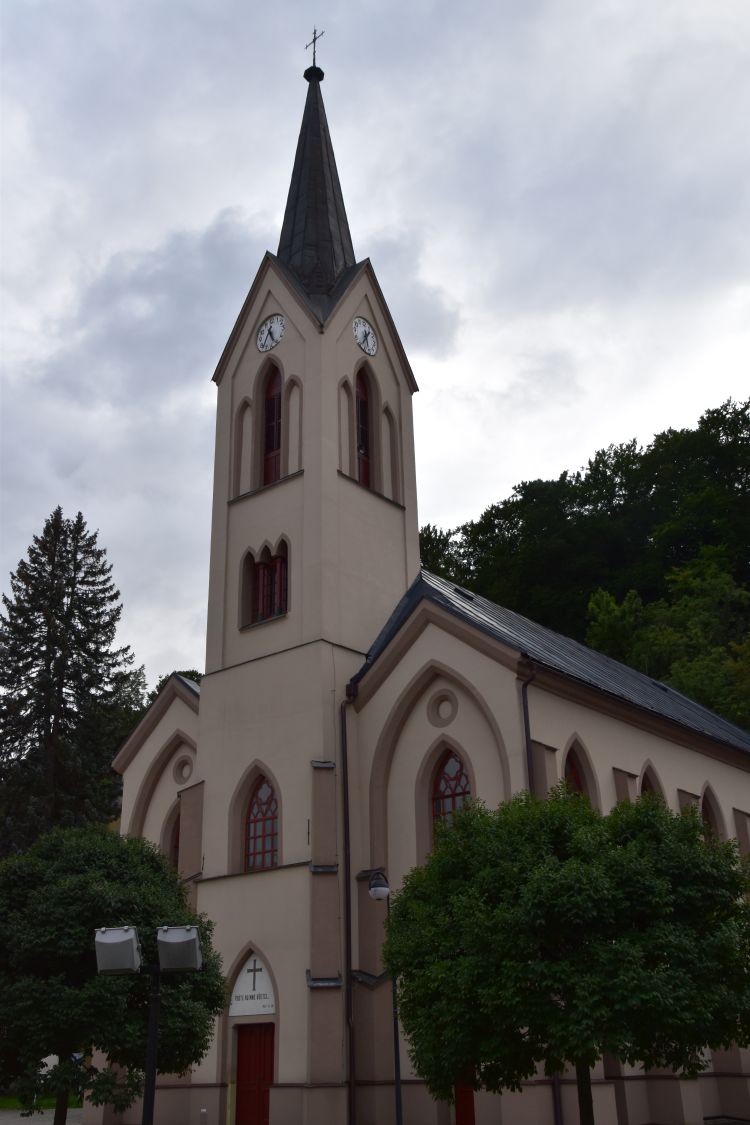 There are also museums here… it is a quiet and welcoming place.

Articular churches are protestant churches. In 1681, the Habsburgian emperor Leopold I needed loyal protestants to contain the danger of attacks by the Turks. Therefore he allowed the protestants to build churches. However, they had to follow restrictive rules written down as “articles”. The articles defined that the protestants had to build their churches outside the cities and villages using wood, no metal, no stone base, and completing the work within 12 months (Müller, p. 274).

By the way,  Leopold assessed the looming danger correctly… the Turks attacked Vienna two years later, in 1683. The Turks could not cope with the heavy rainfalls and were defeated by the Polish king Sobieski at the Kahlenberg mountain.

There are two articular churches near Dolny Kubin, the first at Istebné and the second at Leštiny .

The articular church at Istebné

The articular church of Istebné, built in 1686, is located 5km west of Dolny Kubin.

The church is above the village. There is nothing but a footpath to access it. 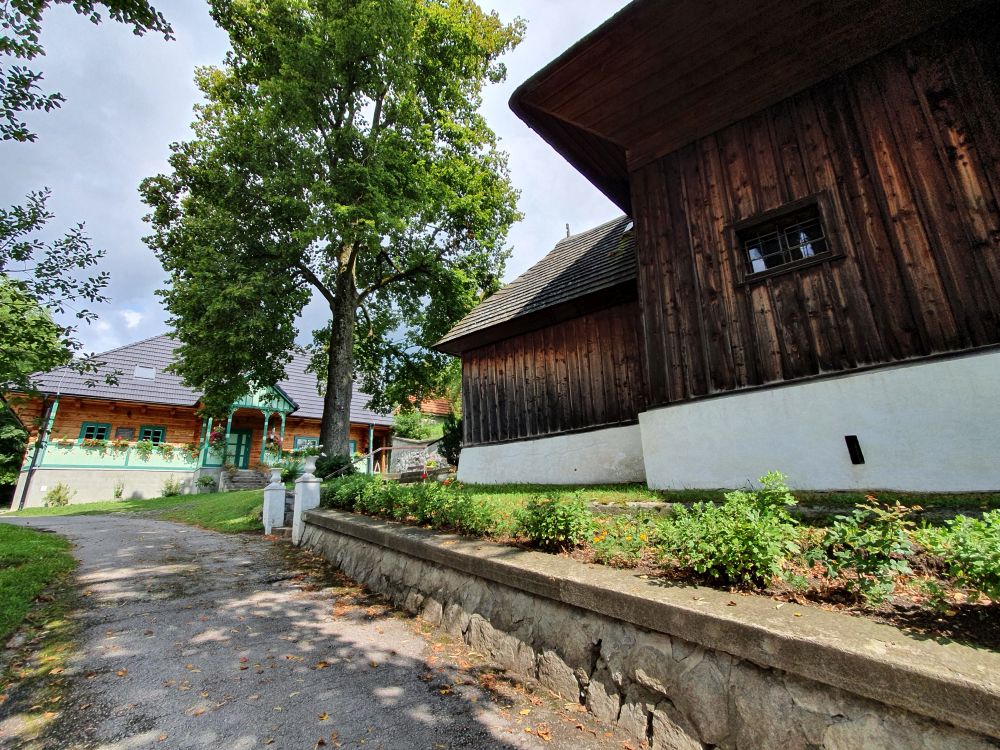 This is the main entry door… 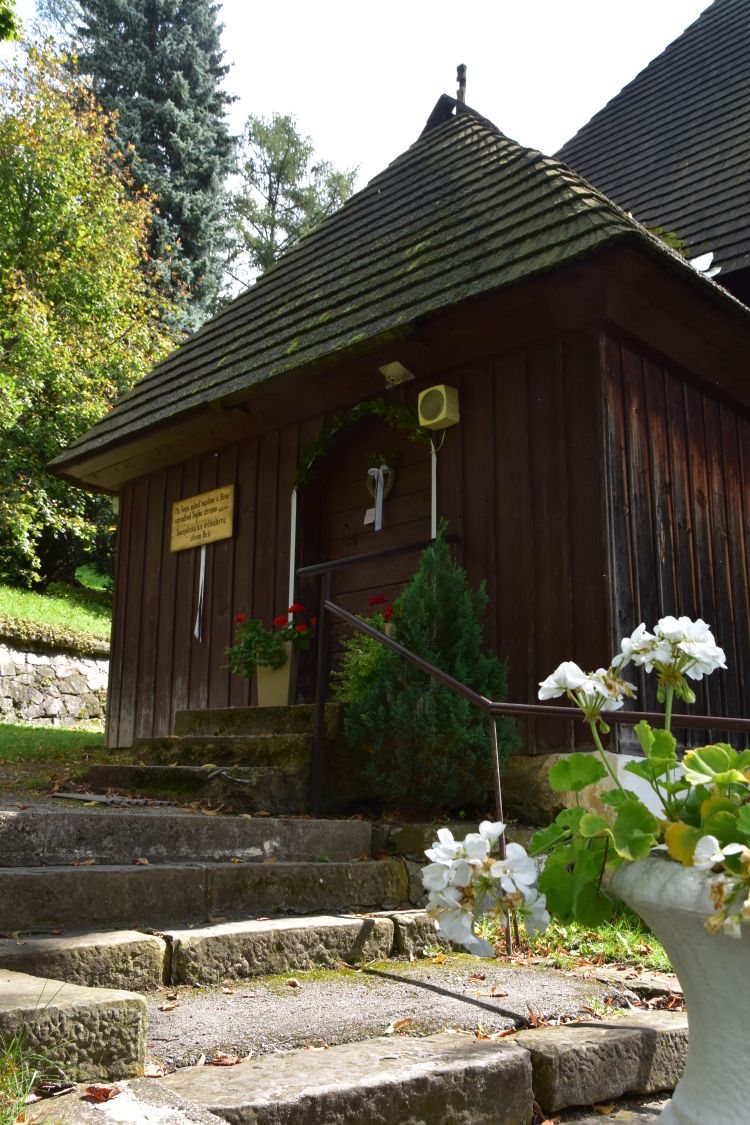 This articular church has a belfry, which is an exception, as belfries had been forbidden by the articles defined by Leopold I.

There is a platform above the church. I look back. 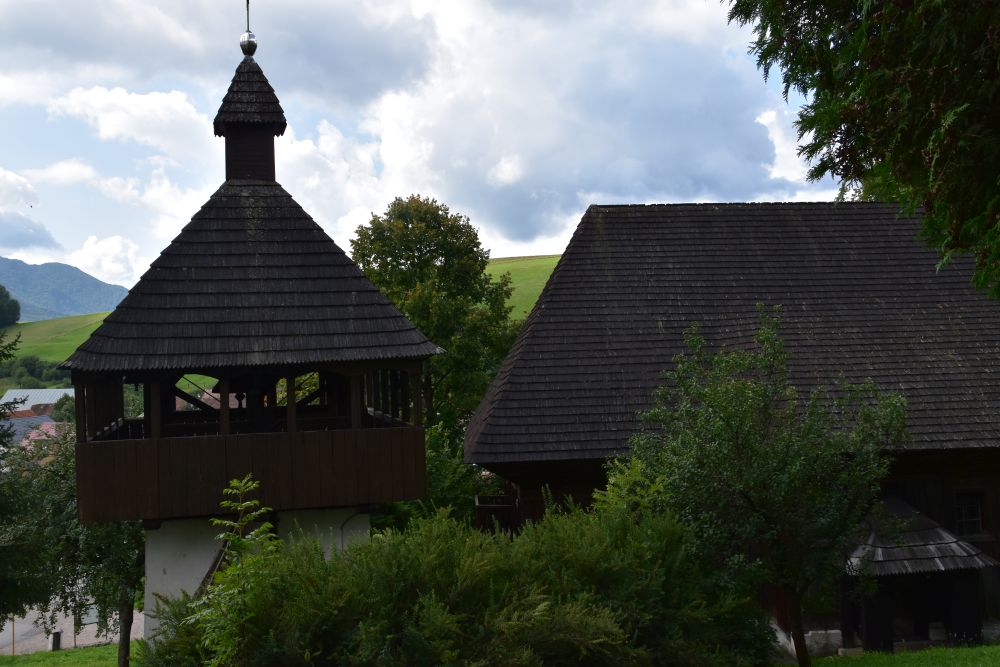 From the platform, I have a good view of the village Istebné and the Mala Fatra mountains. 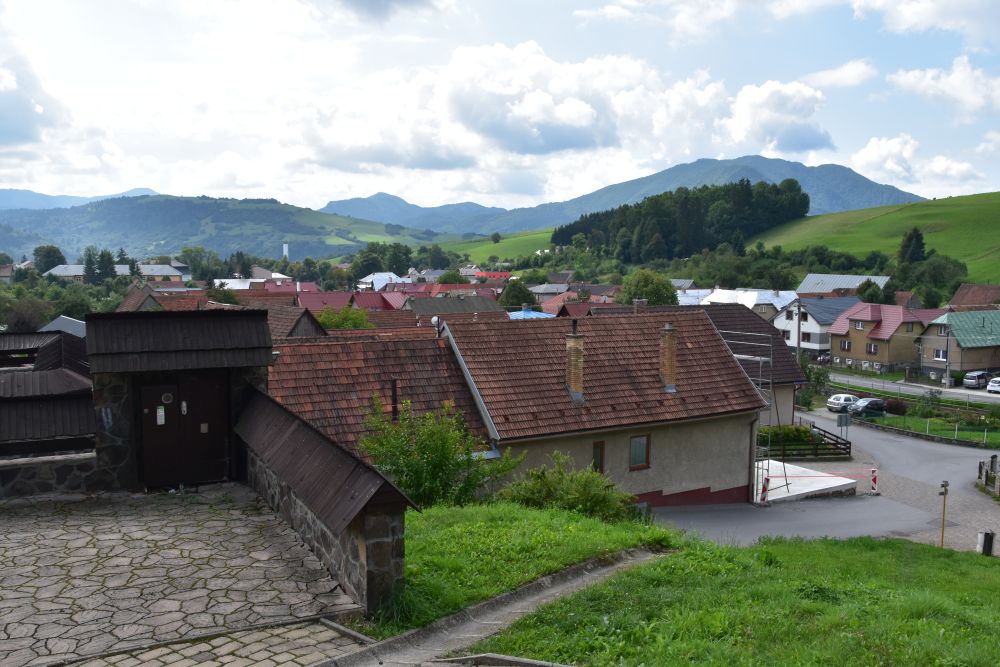 The articular church at Leštiny

South east of Dolny Kubin, there is another articular church at Leštiny. In 2008, it has been included in the list of UNESCO heritages.

It takes me some time to find the church above the village. It is located on a hill behind trees. A small footpath leads to the gate. I enter the church area surrounded by a wooden wall.

A gallery gives access to the church crouching on the hill.

The cemetery surrounds the church.

A small balcony leads to the door. It is is open. 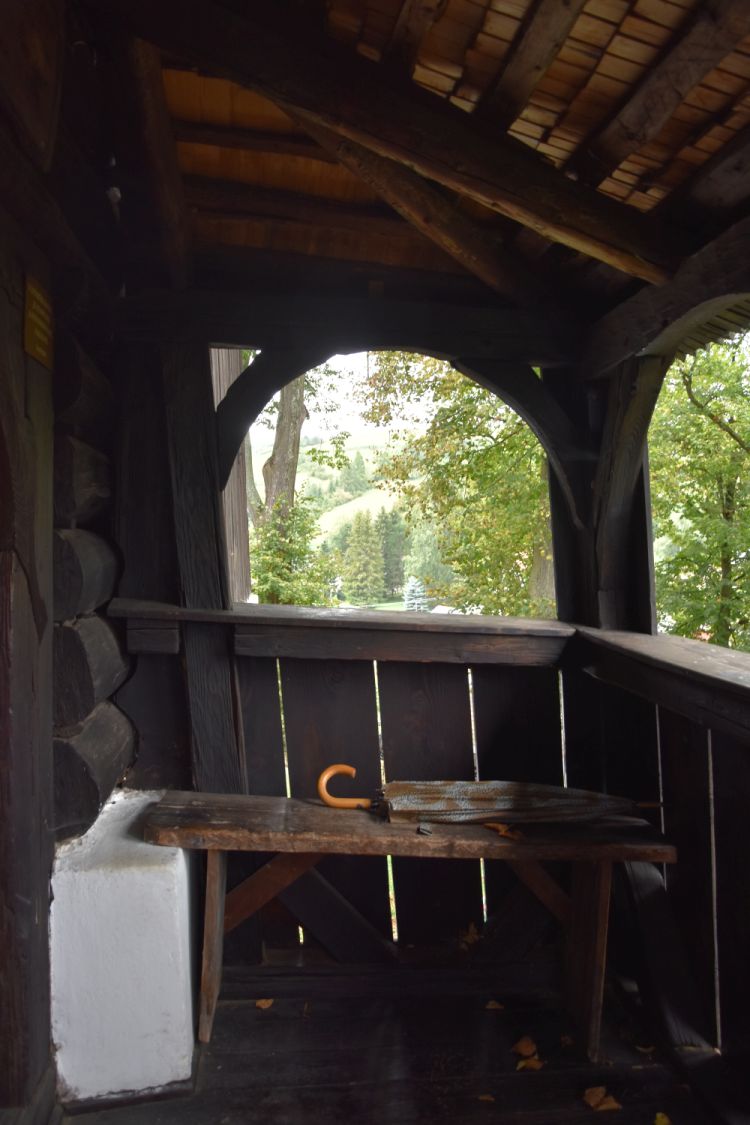 I enter, and there is a service going on. I sit down quietly, watch the service and look at the paintings (of course I take no photos). One lady tells me angrily that this is a service. I continue to be quiet and to listen. The lady gets more and more angry. She says “yzas” which I understand from Russian: It must mean “terrible”. I do not know, what is so terrible about me and continue to listen. She says “yzas” again, gets up angrily and approaches the priest that continues with his service. She tries several times to talk to him, I believe to chase me out of this church. I feel very unwelcome, do not understand, why I cannot attend this service (presumably it is a protestant service, and I am protestant). I leave this beautiful and solemn place sadly. Something like that has never occurred to me in any church. I do not understand why attending a service should not permitted.

The Orvina Castle – the background stage of Nosferatu

It is raining, when I get to the Orvina Castle. This is the view from the Orvina river. The top of the castle is more than 100m above the river. It is an impressive castle. 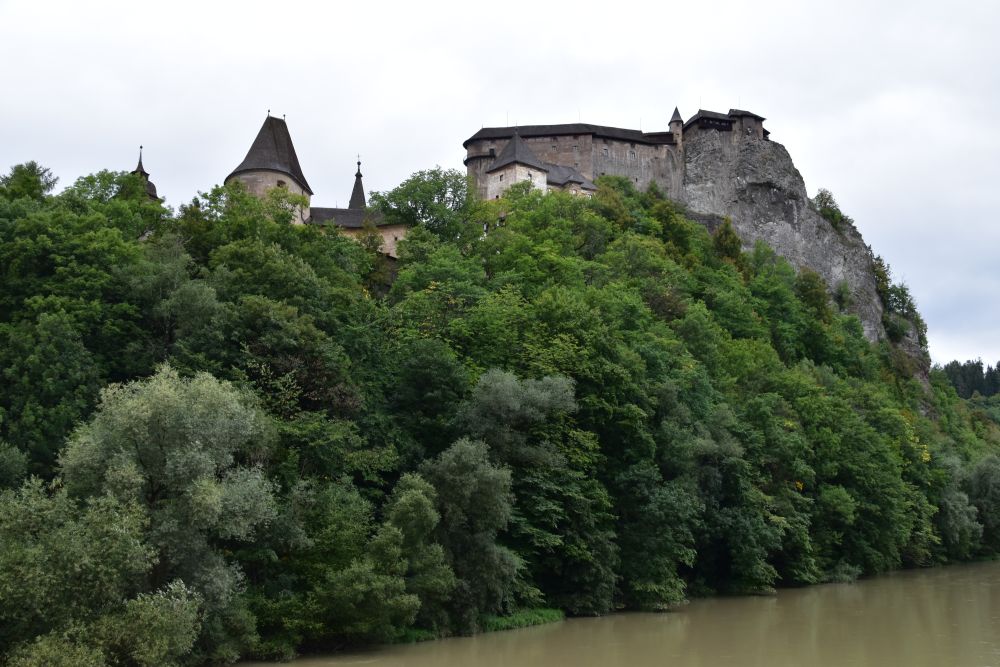 This is the entry.

Looking upwards, I see countless storeys that crouch along the rock.

I enter the vaults. The Orvina (or Arwa) castle set the stage for the film Nosferatu in 1922.

Coaches are here, and also Nosferatu welcomes the tourists. 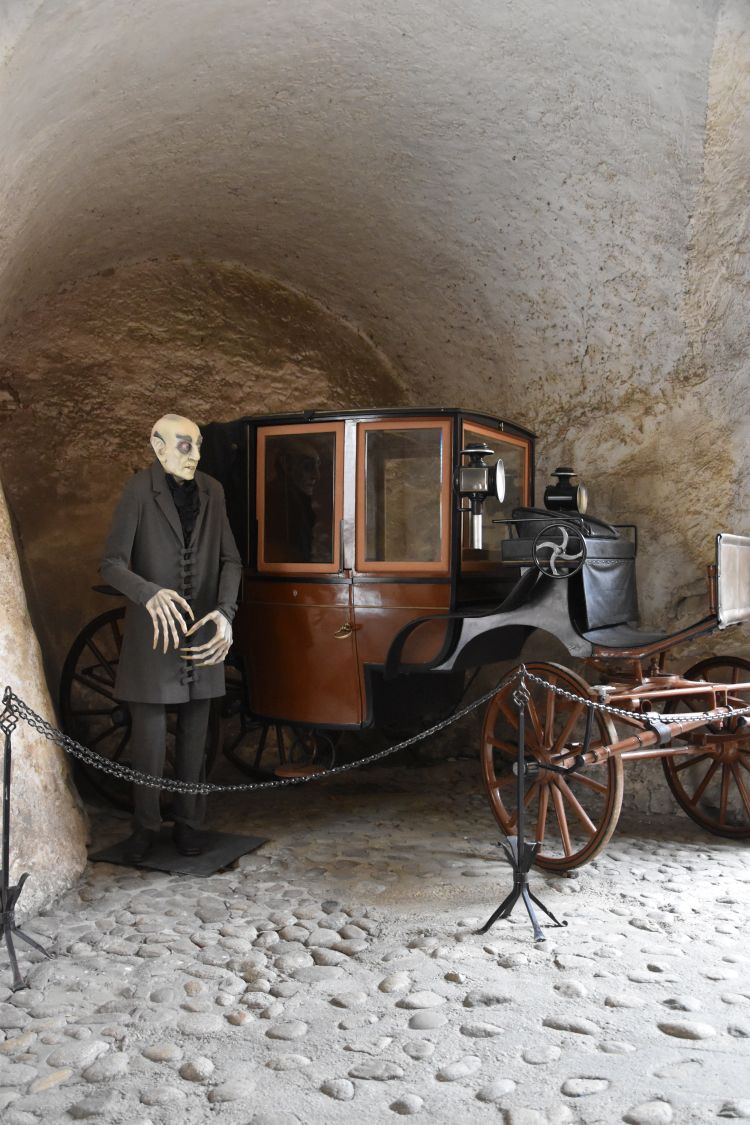 Through another gate, I enter the first courtyard. I can see that Slovakians must love children. 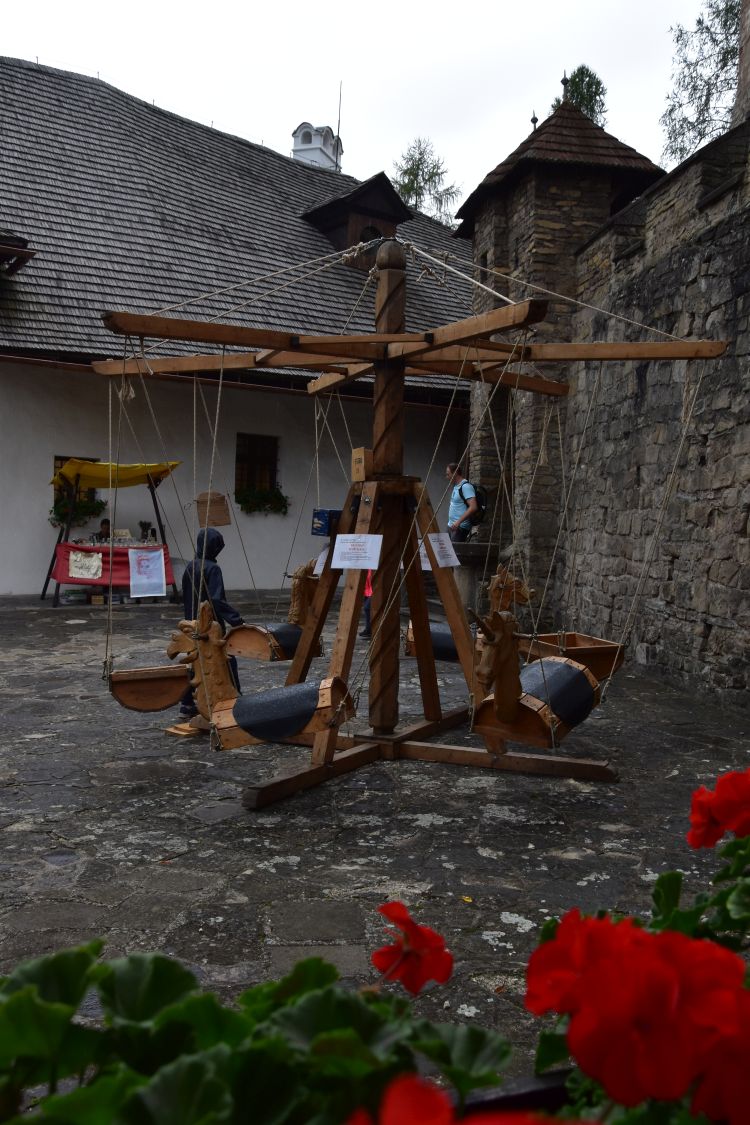 Now, I look back at this first courtyard. 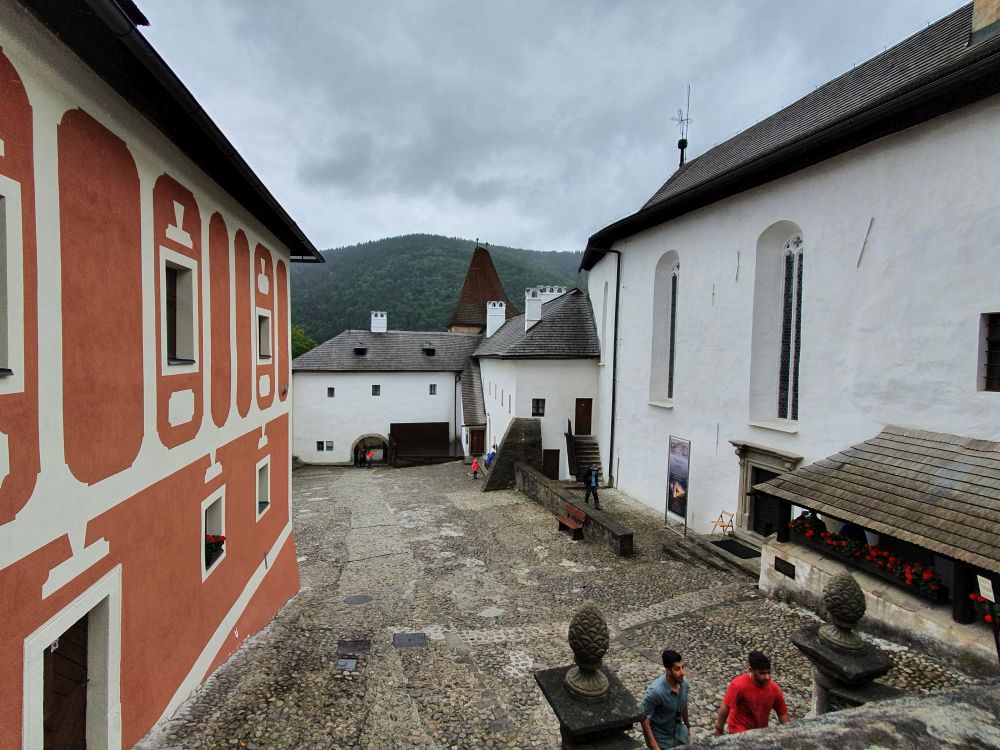 Now I am one level higher and look back at the first and at the second courtyard.

I climb various stairs and reach this balcony, wet from all the rain. I am in the middle part of the castle, where the Hungarian king Corvinus once lived. 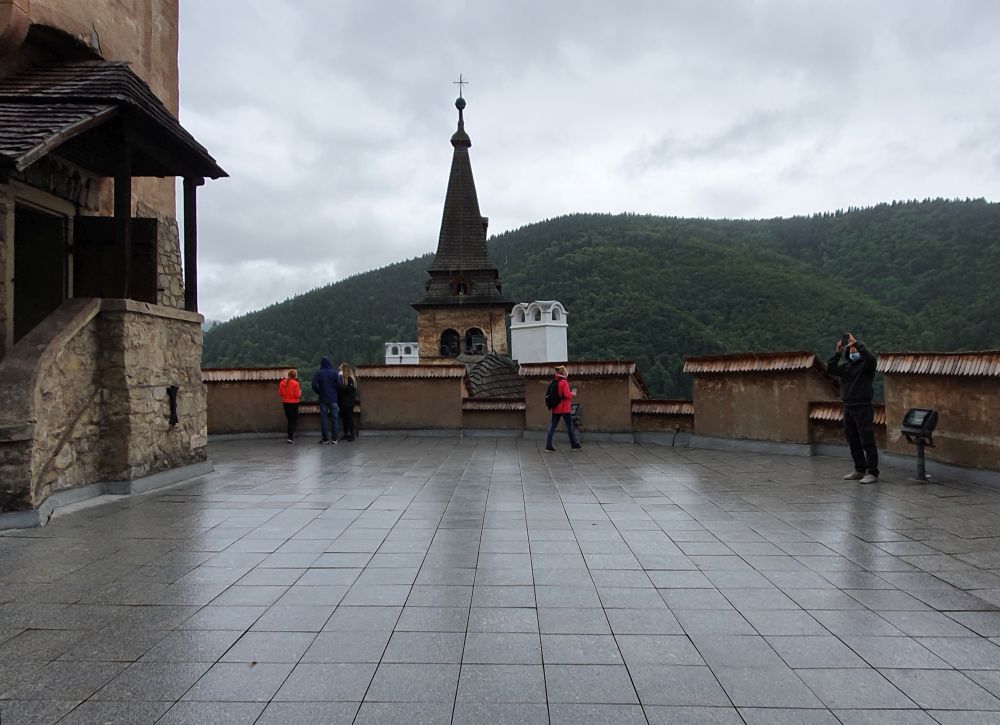 Still much to climb ahead of me.

Stairs – how did they construct this? 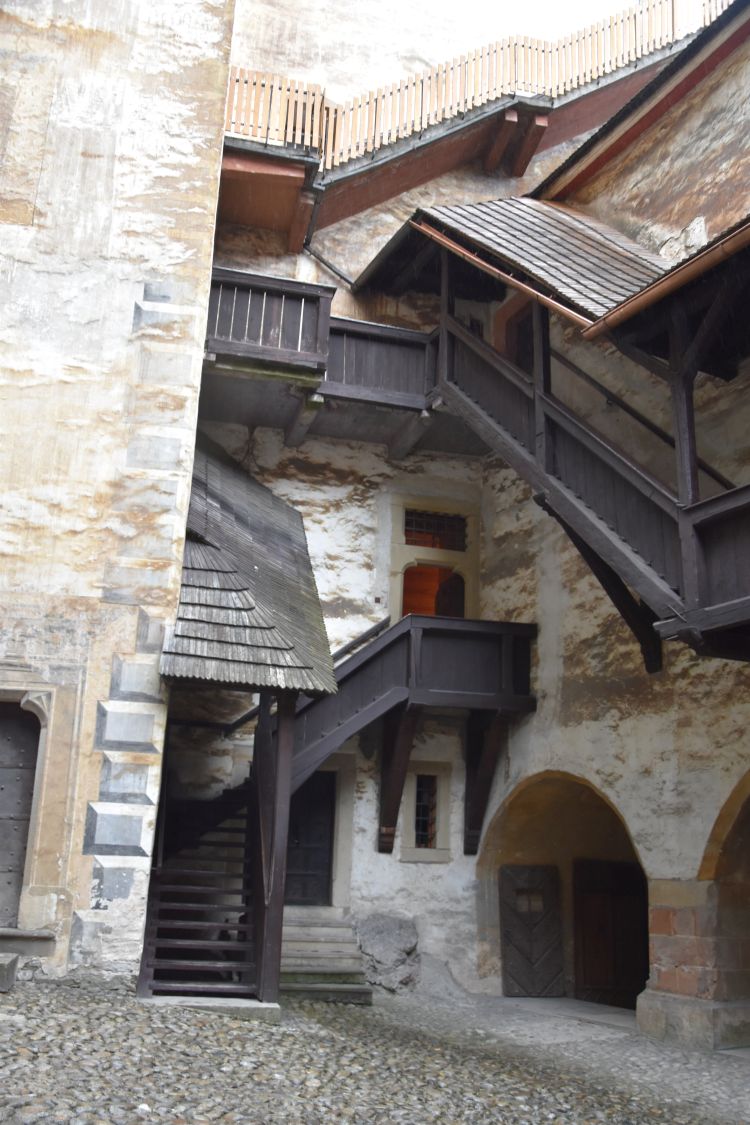 This top building is the oldest part. The stairs lead along the rocks. 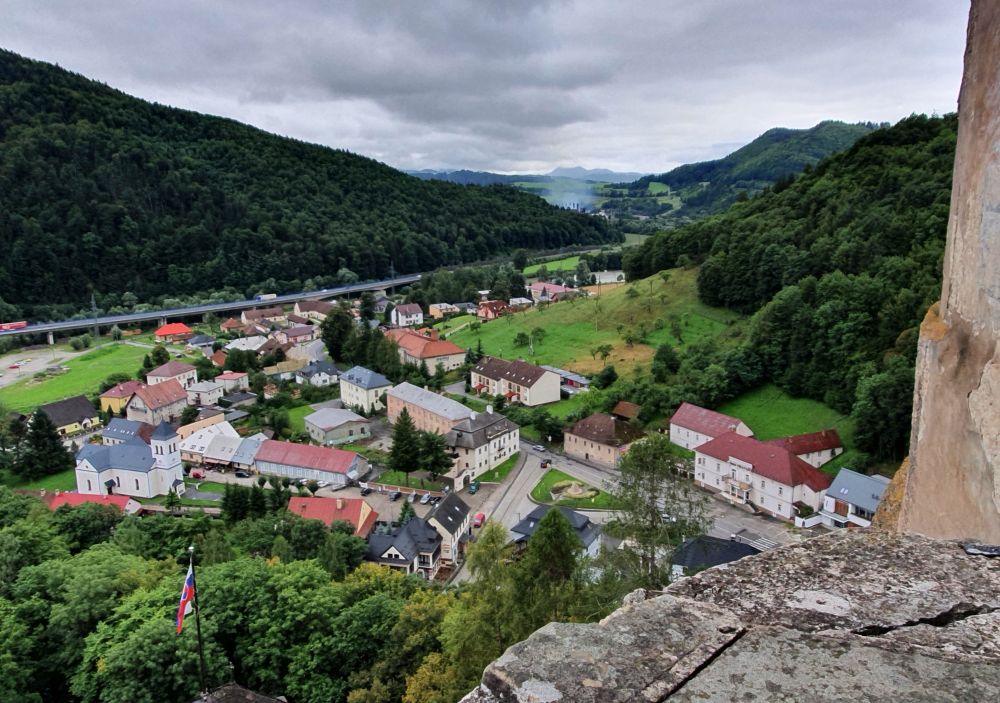 I did not really stay in the rooms, where king Corvinus lived (middle part) or where the noblemen Thurzo lived (lower part). There were just too many visitors and visitor groups inside which I prefer to avoid in these pandemic times. I ran up the stairs, from one level to the next, arriving at the top almost exhausted. An impressive fortification! I imagine, it was a wonderful stage for the horror film Nosferatu, but it must also have been frightening to create horror scenes – it is all too steep and exposed. I am not sure, whether I would have liked to be an actor in this film…

I might have to return one day, when the pandemic will be over, to check out all the rooms and the church with the tombs in detail.

6 thoughts on “A Swiss butterfly in Slovakia: Around Dolny Kubin – wooden churches and the Orvina Castle”