In August 2022, we travel to Berlin, with stops at Riedlingen, Ulm, Rothenburg ob der Tauber and Nebra. Now, we are at Nebra and learn about the Nebra sky disk.

The oldest known representation of the sky: The Nebra sky disk was found by bandit archaeologists

This is the Mittelberg in Sachsen-Anhalt, 252m high, near the village Nebra, where bandit archaeologists found the Nebra sky disk in 1999.

They found the disk near the white lookout tower. I took the photo in front of the museum Arche Nebra that points to the Mittelberg.

The location of the find has been marked with this sky mirror.

The Nebra sky disk is the oldest known depiction of the cosmos, created around 3000-4000 years ago. It is made out of bronze with a decoration in gold. 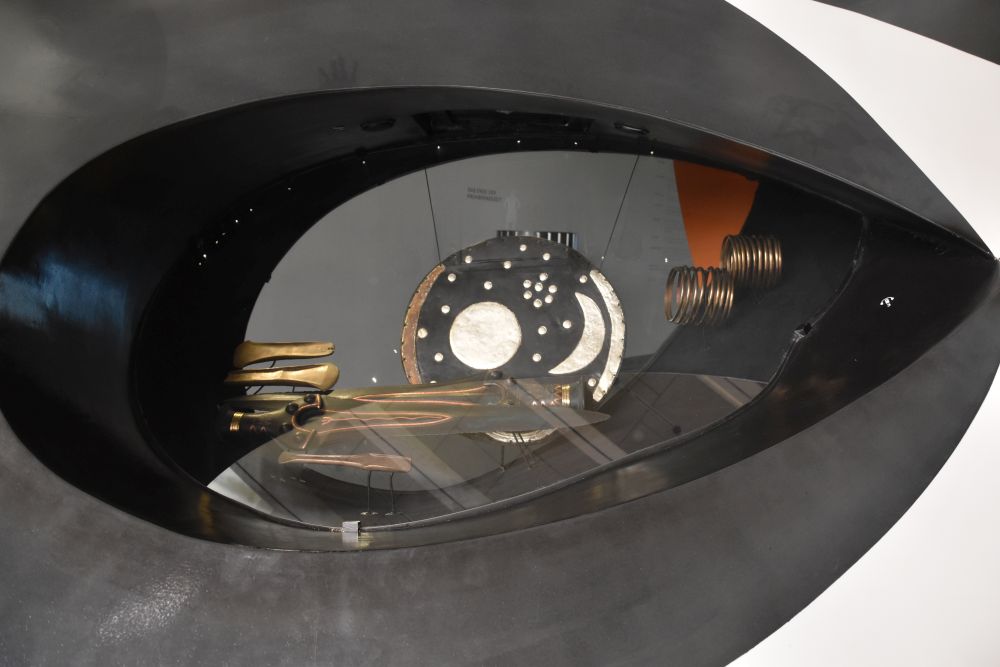 At the same place, the bandits found two swords made out of bronze, hatchets, chisels and bracelets, as displayed in the window of the Arche Nebra museum below the Mittelberg. 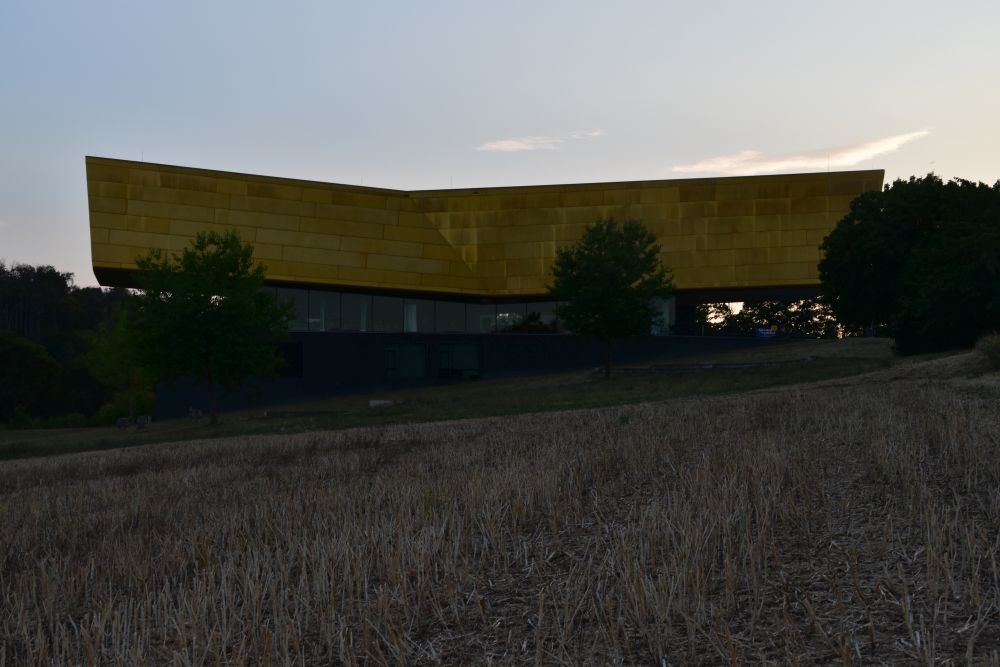 It has been built by Holzer Kobler Architekturen.

According to the law of Sachsen-Anhalt, archaeological finds belong to the state. Nevertheless, the bandits sold their finds to a dealer at Cologne. Until 2001, it changed owners several times. As it soon became known that the disk was the property of Sachsen-Anhalt, it was worthless for the legitimate art market.

In April 2002, the Nebra sky disk was exhibited in the Prehistoric State Museum of Halle.

What I can understand on the disk are the crescent moon next to the Pleiades shown as a cluster of seven spots. The big golden circle is indicated as representing either the full moon or the sun.

The Pleiades and the crescent moon mark the moments for seeding and harvesting, also at that time.

The sky disk made Nebra famous. Though the original disk is in the Prehistoric State Museum at Halle, the village Nebra and its suburb Kleinwangen have set up an infrastructure to attract and inform interested tourists at the place where it all happened. 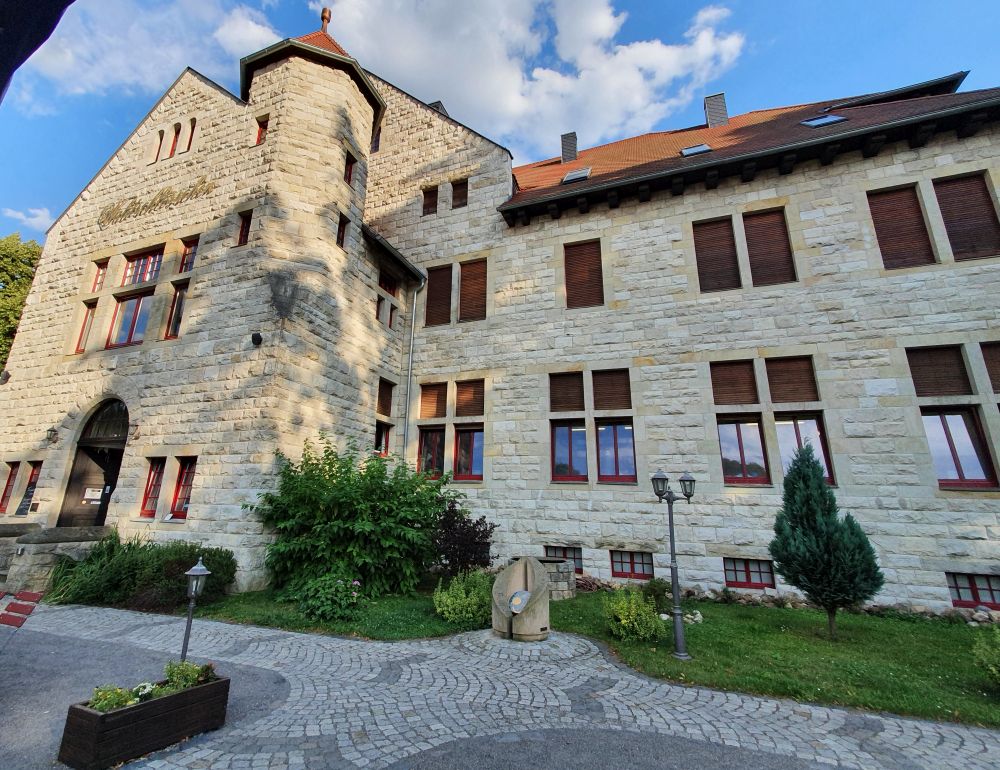 Just behind the hotel, the path to the Mittelberg starts – with this souvenir dispenser.

It has faded a bit. I am not sure, whether it has been used a lot. We did not try.

500m above the hotel, the museum called Arche Nebra invites to explore the Nebra sky disk. 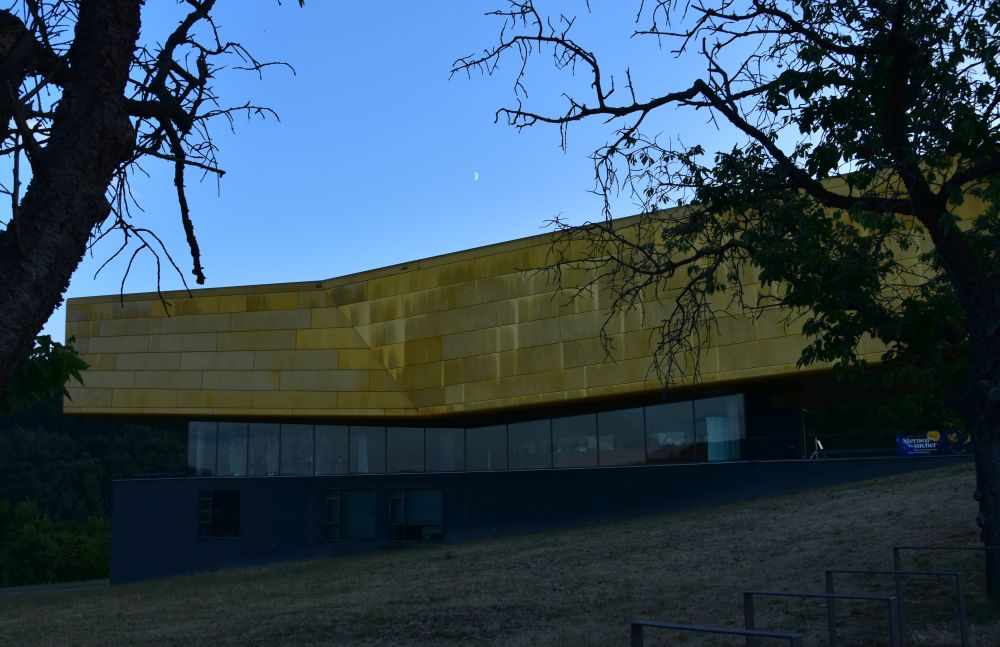 I was here in the evening and looked at the crescent moon above the Arche.

The coming morning, we climbed the Mittelberg, where the findspot of the disk is, as indicated by the mirror.

The tower nearby is split to illustrate the solstice dates marked on the sky disk.

We climb the tower and enjoy the view.

From the tower platform, we can see the local museum Arche Nebra in the south. It points uphill to the location, where the disk was found.

We walk back down again. It is a beautiful round tour. We visit the museum Arche Nebra to learn more about the disk. However, we decide to postpone seeing the original disk at Halle; the State Museum has just sent the original to Holland. 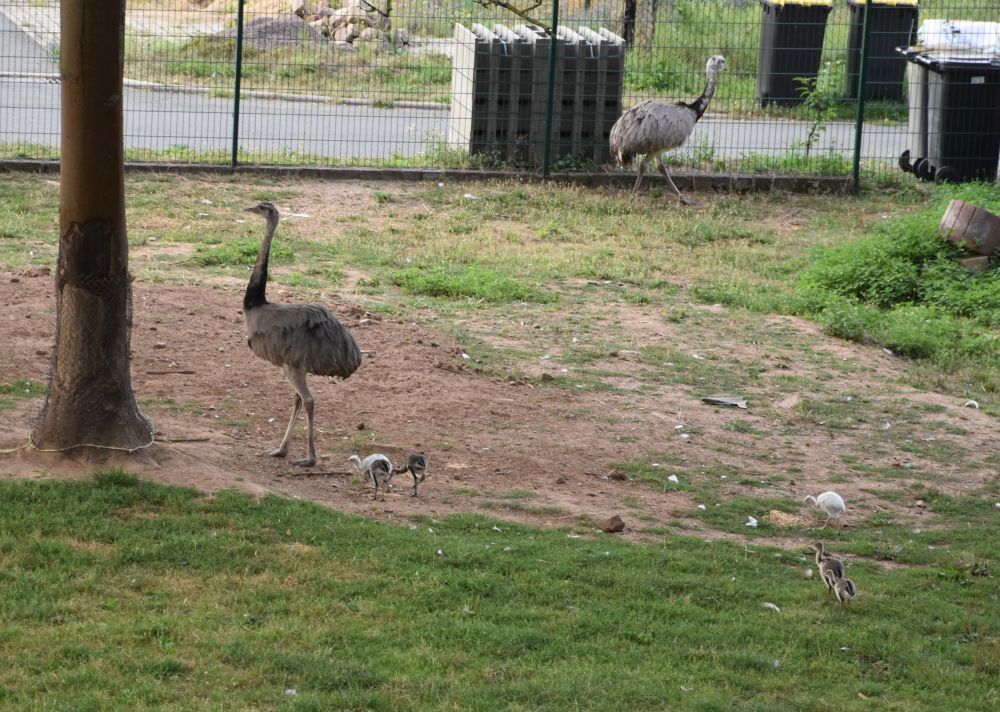 … and the dwarf goats that climb around with agility. 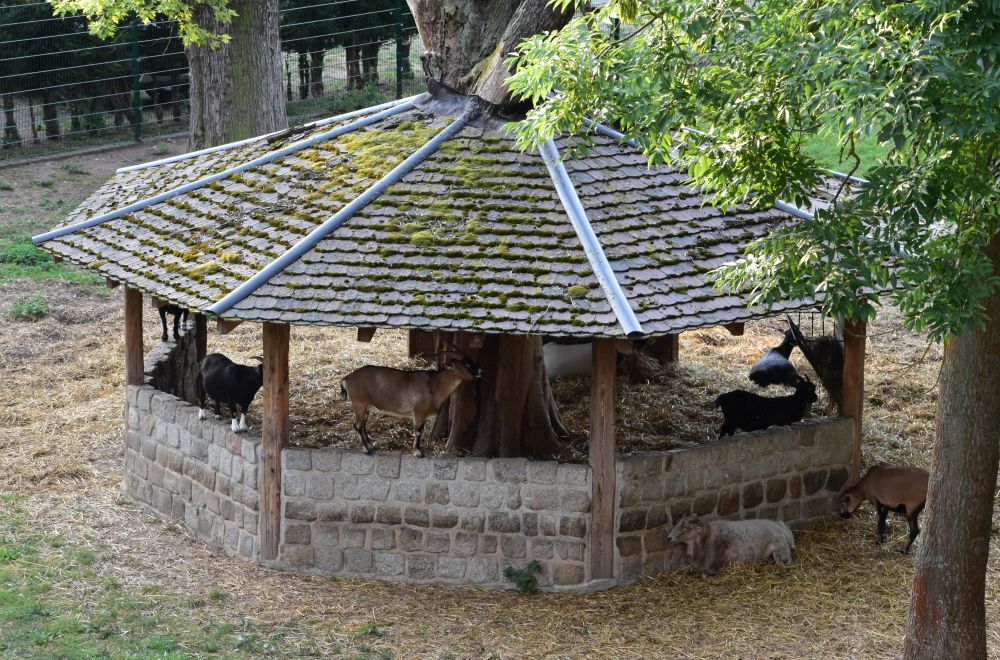 What a charming backyard.

Some 20km away, we stop near the sun observatory of Goseck. It is 7000 years old.

The palisades appear behind a field of sun flowers.

In 1991, archaeologists discovered the ring ditch (Kreisgrabenanlage) from the air. They investigated it and reconstructed it with 1758 tree trunks. 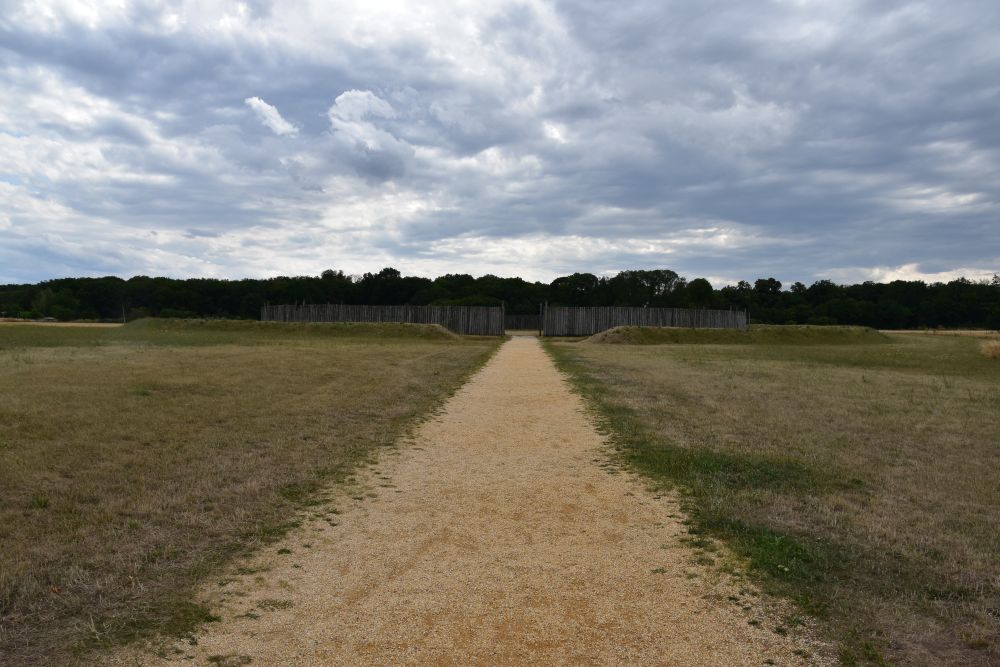 The diameter is 70m. The panel shows, how the winter and summer solstice dates as well as the spring festival of May 1st can be observed…

… based on the “holes” in the palisades, just as on the Nebra sky disk. 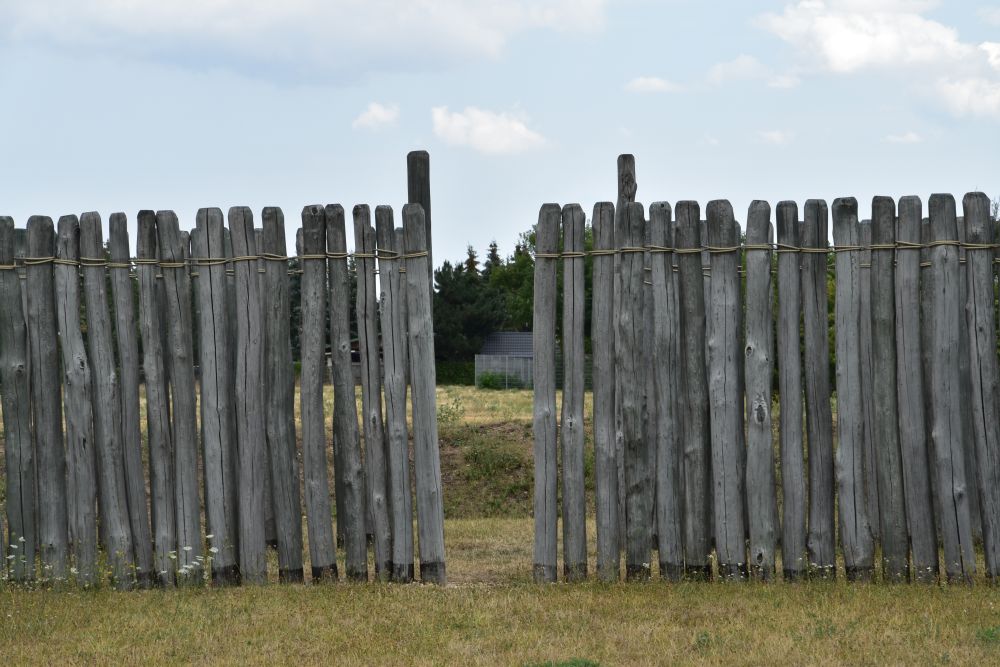 To Berlin with a wet stop in the Wörlitz park

On our way to Berlin, we make a short stop at the Wörlitz park. As we leave the car, it pours with rain. Immediately, we are wet through. We have a quick look… 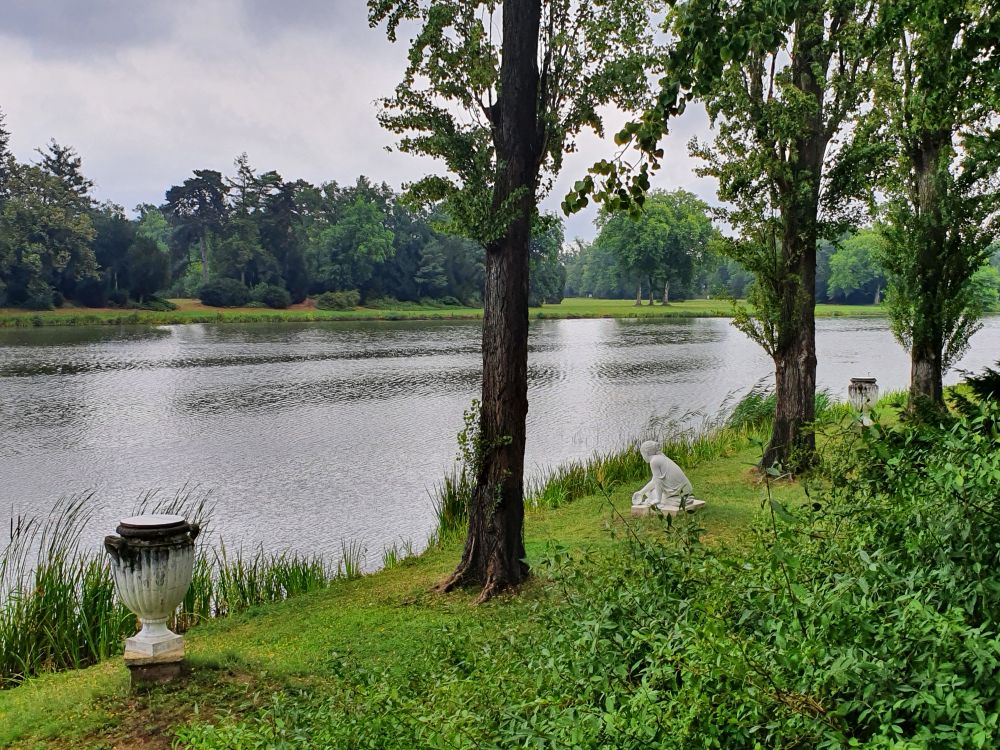 … and postpone exploring this park for better weather.

We arrive at Berlin. The city is dry. The Grunewald is burning behind the AVUS. The AVUS highway to Charlottenburg is closed. Ahead of us are dry and warm summer days in my mother town.

Sources: Panels in the Arche Nebra museum and at Goseck.

A hundred years ago, my grand-father was at Rothenburg ob der Tauber

My wish was to find the place that my grand-father Hermann Radzyk painted about a hundred years ago. 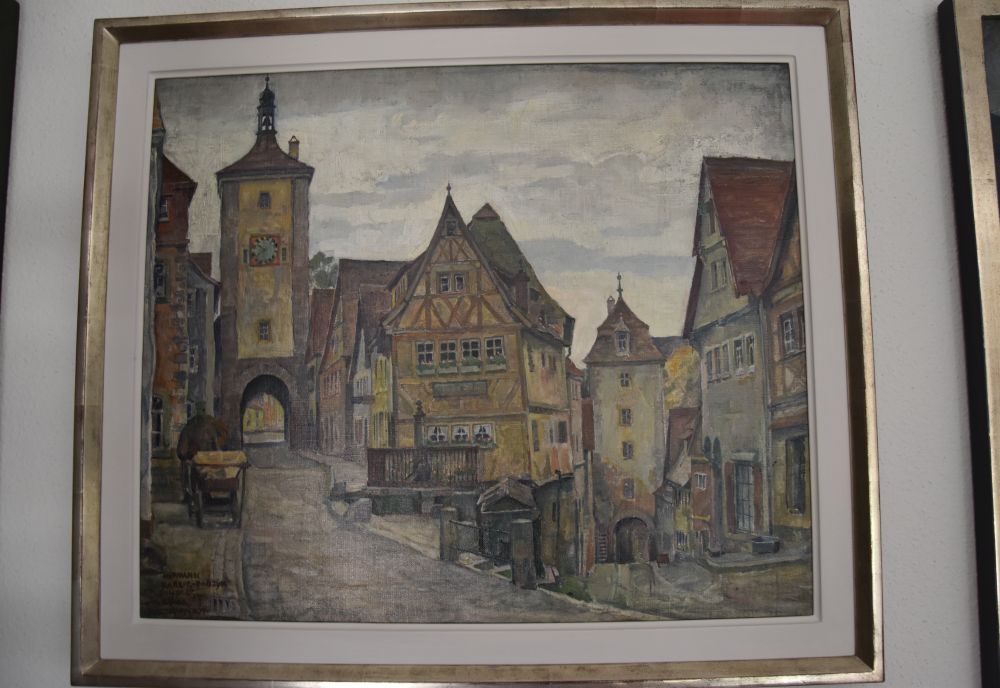 I found the place: It is the Siebersturm (city gate) and the Plönlein ( a slightly slanting half-timbered house). Rothenburg tourism says, this is probably the most photographed landmark of Rothenburg.

A short stroll through the medieval streets of Rothenburg

Rothenburg, located on a rock above the river Tauber, was a flourishig free city that lost its importance after the War of 30 Years (1618-1648). It preserved its old city image until today. It is a tourist hot spot.

The wall with the gates surround the city. We walk outside the wall (I believe this is the Klingentor) to have a picnic under a shady tree.

… we enter the city through the Burgtor.

We stroll through the Herrngasse with the half-timbered houses.

The teddy from the Teddyland Shop greets us.

We feel hot, The temperatures are at about 35 degrees and the sun burns. We eat an ice cream in the shade. Just too hot to walk in the streets now. I would like to return and explore the treasures of Rothenburg ob der Tauber, when temperatures are cooler.

We return to our car. We want to get to Nebra today. A ride of three and a half hours is ahead of us.

We stay overnight at Ulm, or more precisely at the suburb Gögglingen. We have booked our room in the hotel Am Zehntstadl. It is a quiet place with a friendly manager and welcoming staff. This cute shoe wiper (Schareisen or Schooryse) illustrates the ambiance perfectly.

We have a wonderful dinner at the Pizzeria Romantica. The cook is from  Sardinia. He DOES know, how to prepare delicious antipasti.

Walking along the Danube

After dinner, we walk along the Danube (Donau),… 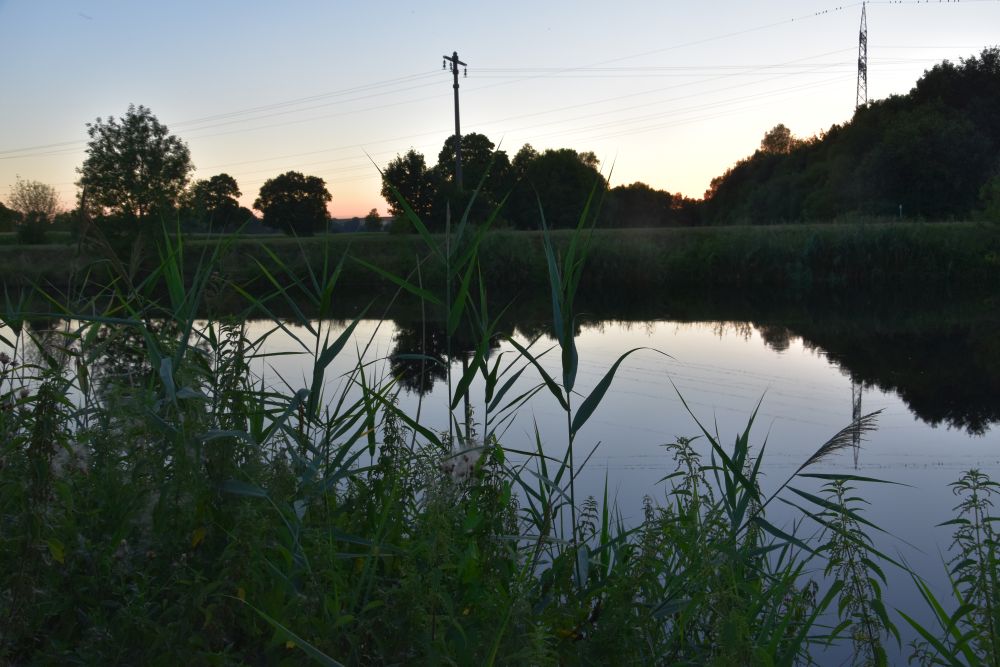 … and wonder, whether the starlings are already getting ready to fly south. 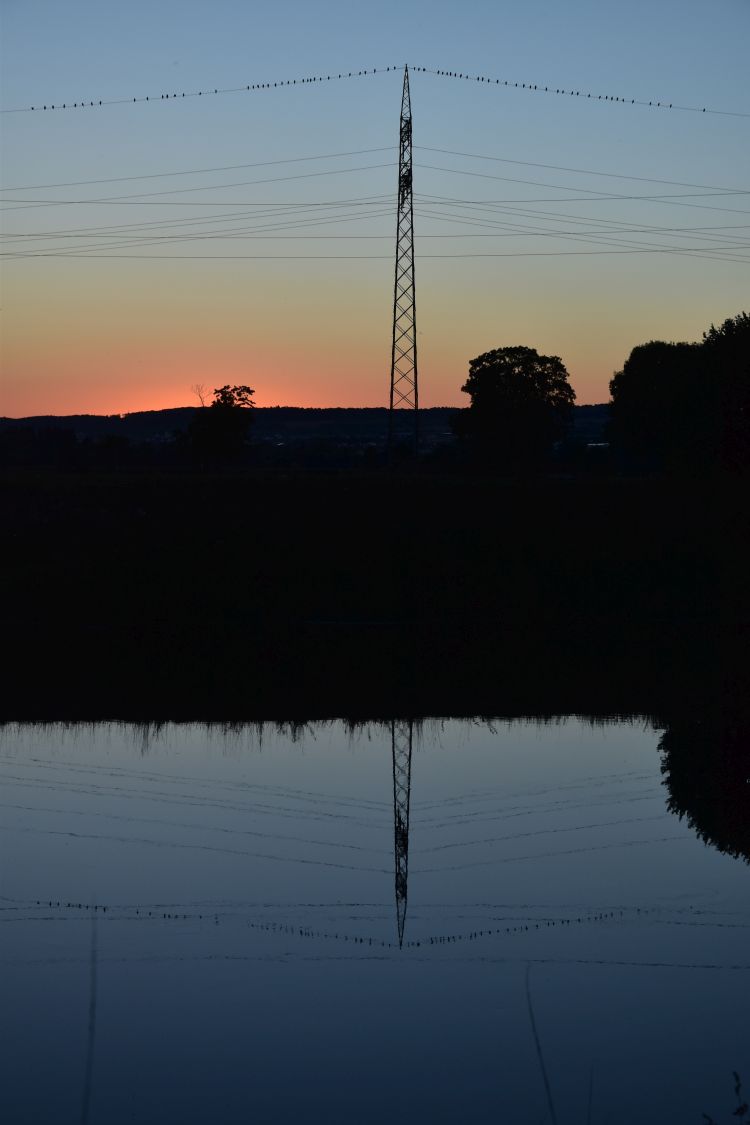 In the morning, we have a quick look at Ulm.

Ulm is located on the Danube, where the creek Blau, split into two arms, joins the Danube.

We park our car in the Fischerviertel and cross the two arms of the creek Blau. The ducks cool down here. 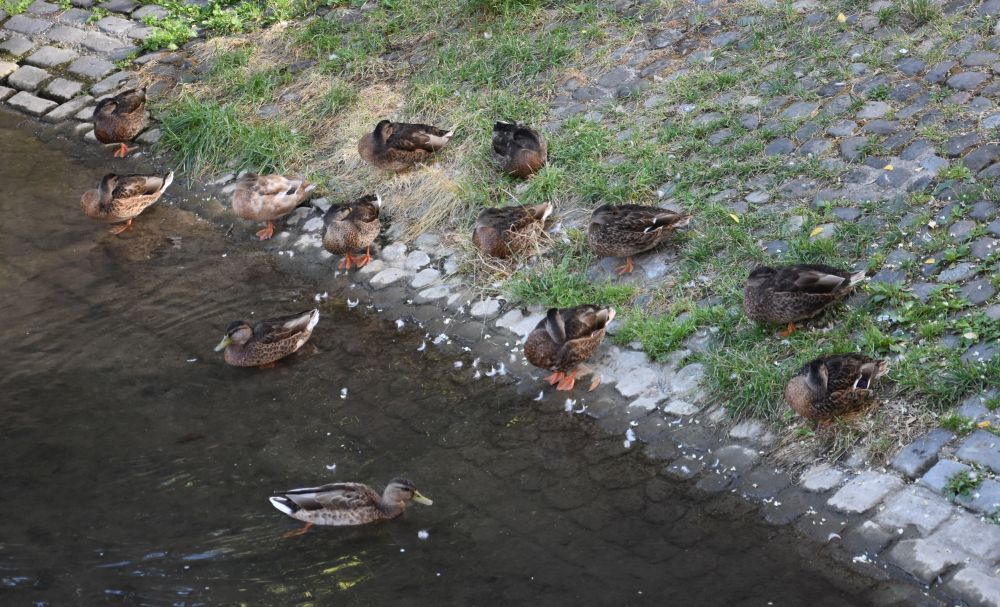 The weeping willow hangs over the Blau.

We stroll through the  streets of Ulm. Saint Christopher welcomes us travellers. 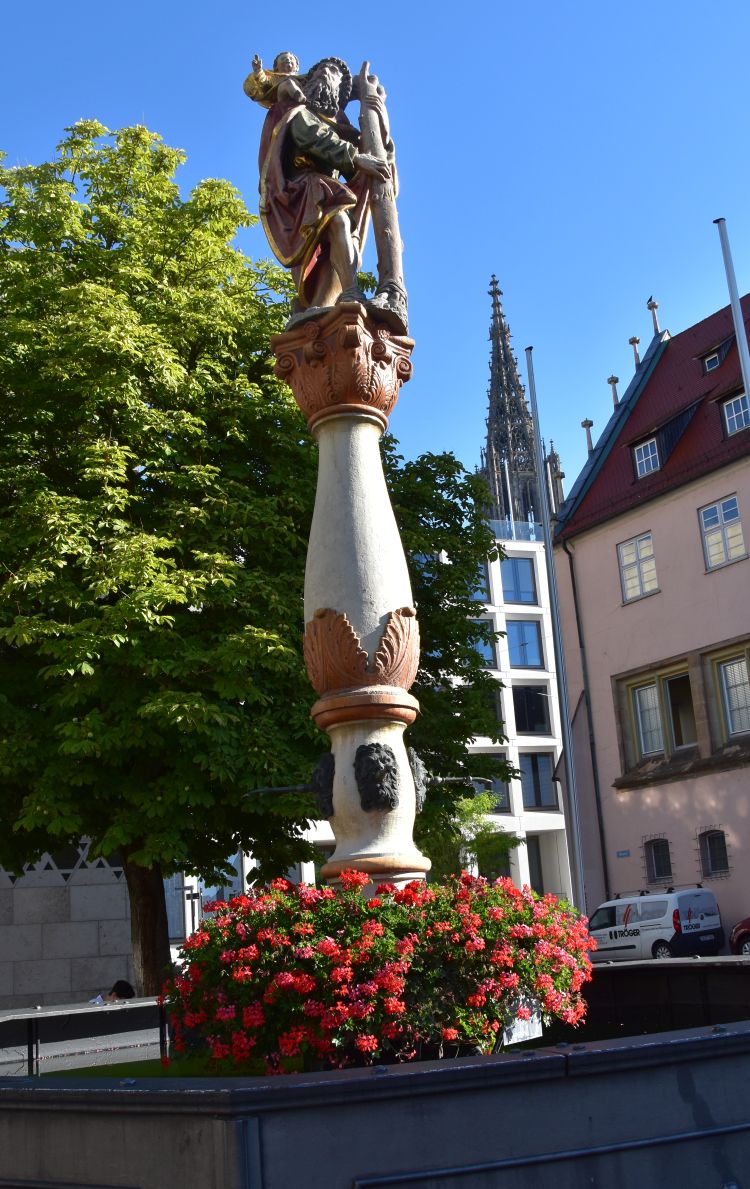 Ulm has been known since 854. It was a royal palace that was later fortified. The first bridge across the Danube was built in 1174.

Located at the junction of trade and pilgrim routes, it became  a free imperial city in 1184. The city flourished until about 1500.

In 1397, the “Grosser Schwörbrief” (Great Oath Letter) defined the duties of the mayor, the guilds and the patricians. The Schwörhaus (Oath House) was erected as the place, where the oath was to be renewed every year.

The power of Ulm culminated around 1500; it owned large territories north and south of the Danube and was a the political leader of Swabia. It was a trading spot, e.g. for iron, textiles, salt, wood and wine. In addition it was a major center of arts.

The decline started in the 16th century and in 1770, the city went bankrupt. It had to sell some of its territory. In 1802, Ulm and its territory was integrated in Bavaria and in 1810, Ulm, with its territories north of the Danube, became part of Württemberg. Ulm was now a border city between two kingdoms, Bayern and Württemberg. Ulm was deprived of its main economic basis south of the Danube: For instance, the dockyards, the wood trading centers and factories, the landing places for the rafts or major agricultural areas for Ulm were all in the territories south of the Danube.

In the middle of the 19th century, Ulm recovered. After having been attached to the railway system, industrialization evolved. For instance Leube rediscovered production of cement, forgotten since late antiquity and founded the first cement factory in Germany.

The Minster with the highest belfry worldwide

Construction of the Minster started in 1377 and ended in the 19th century, when the city recovered. In 1890, the belfry was completed; it is the highest belfry worldwide.

I could not find out who the figure is above the solar clock.

The gothic Minster was mostly spared from the bombings of the Second World War.

The freso on the quire arch is from 1471 and shows The Last Judgement. I can see the four evangelists on the gothic vaults.

Above the baptismal font of 1474, we notice the pelican that feeds his offspring with its own blood; it is a symbol for Christ. 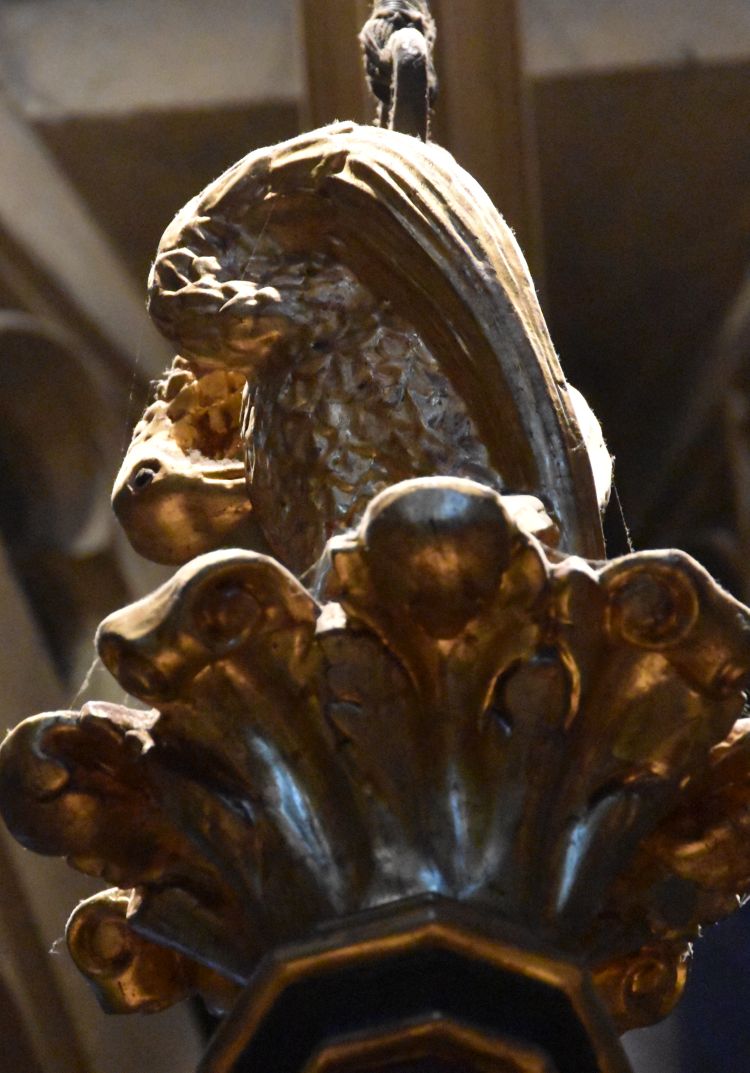 Construction of the City Hall started in the 14th century. Its appearance today is mainly early Renaissance. The bombings mostly spared the façades with its paintings from the16th century. 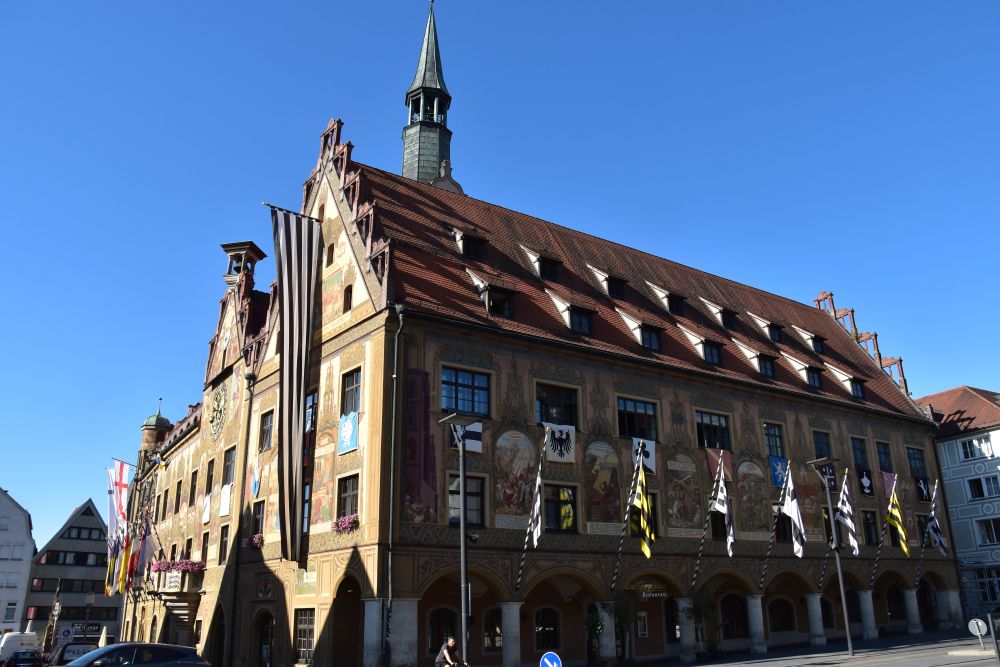 This window at the eastern façade is from the early 15th century and shows Charlemagne. 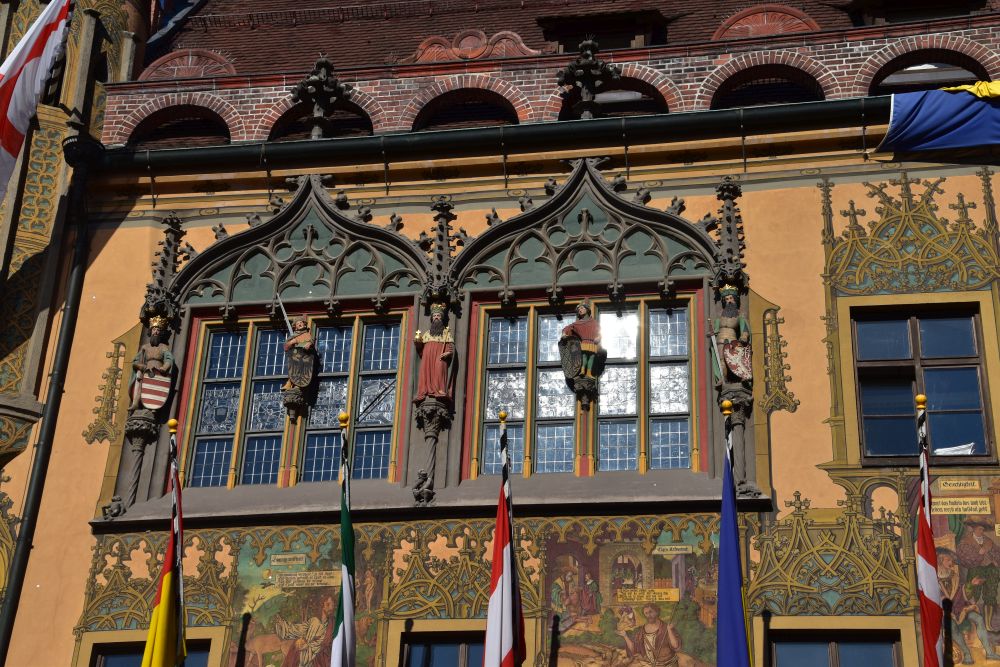 The Kornhaus was a granary, built at the end of the 16th century. The paintings pretend bricks. The bombings did not destroy the façades.

Today the Kornhaus is used for exhibitions and concerts.

The sparrow of Ulm

At Ulm, we come across sparrows again and again. For instance, at the Hafengasse, it invites to go shopping. It carries a branch in its bill. 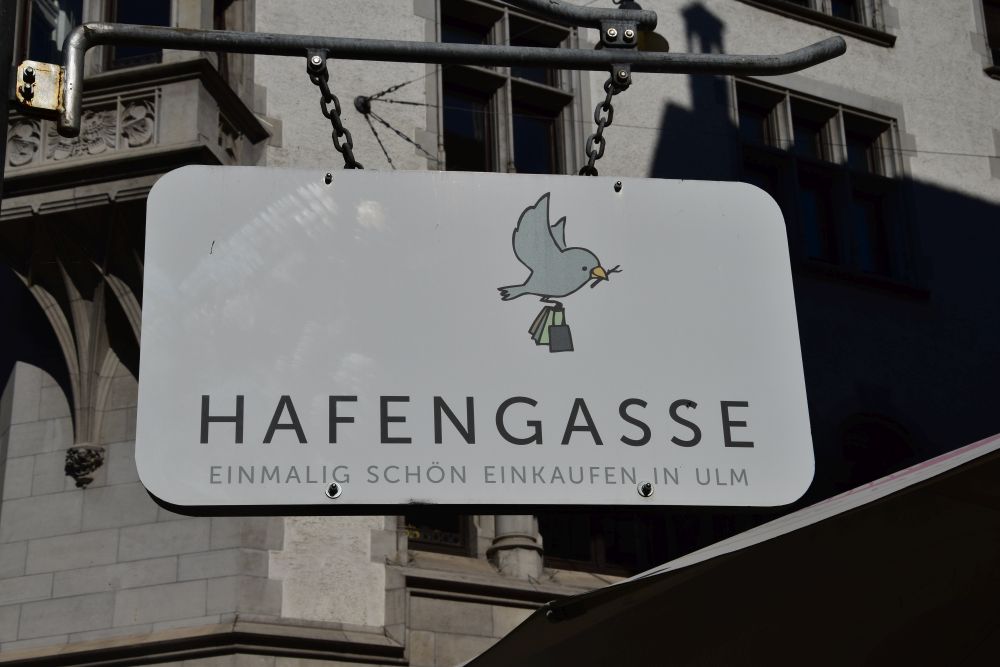 The people from Ulm venerate the sparrow, beause it taught them, how to lay the beams on to the cart that they needed to build their minster: not crosswise, but lengthwise. That is why, a sparrow with a branch in its bill decorates the roof of the Minster. Also the children’s and youth choir of Ulm is called “Ulmer Spatzen” (sparrows of Ulm); it has gained many awards.

We leave the city centre at the Metzgerturm.

An artist has installed some white cables to decorate the Metzgerturm.

We walk along the Danube. Boats are on the Blau, where it joins the Danube.

We return to the parking house and continue our way north to Rothenburg ob der Tauber and to Nebra.

Sources: Wikipedia entries for Ulm, its minster, its city hall with the astronomical clock and the Kornhaus.

Our first stop over is at Riedlingen on the Donau, located at the southern border of the Schwäbische Alb. It is a pretty place on the river Donau.

It is hot and people cool down in the still young river Danube.

The small city is proud of their half timbered houses.

Riedlingen is part of the German route of half timbered houses (Deutsche Fachwerkstrasse). 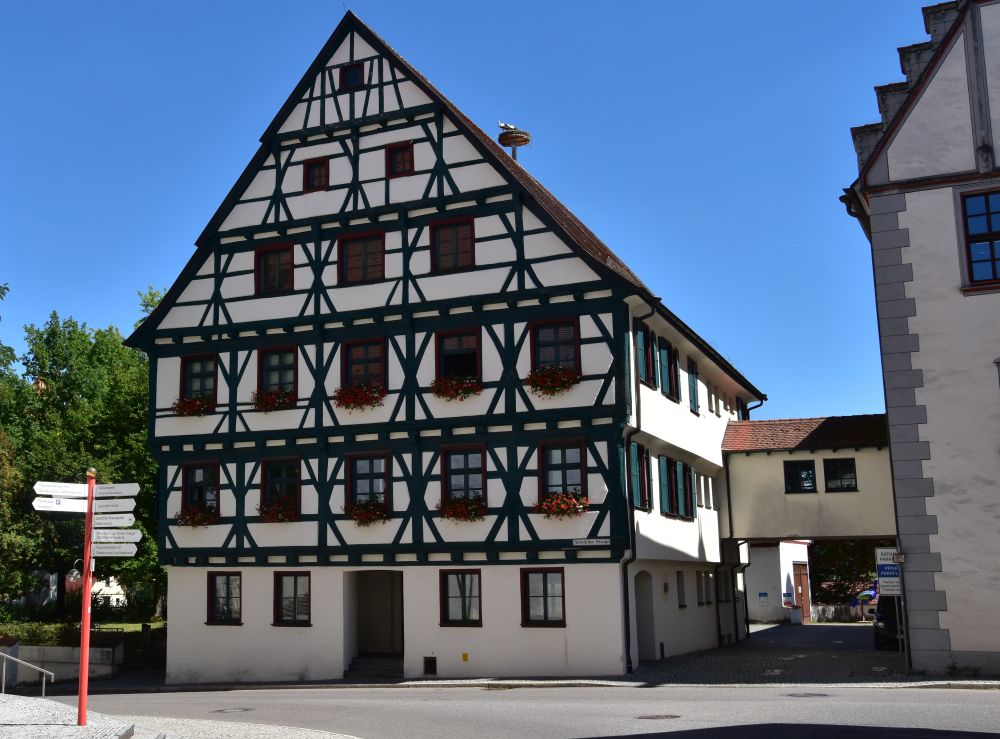 It is a popular stop on the Donau cycling route.

This is Saint George’s Church, located above the village.

The market square tells us that this small city, known to exist since 835, was a market place on the medieval Donau route. In 1680, it became part of Vorderösterreich and in 1805, it was integrated in Württemberg. 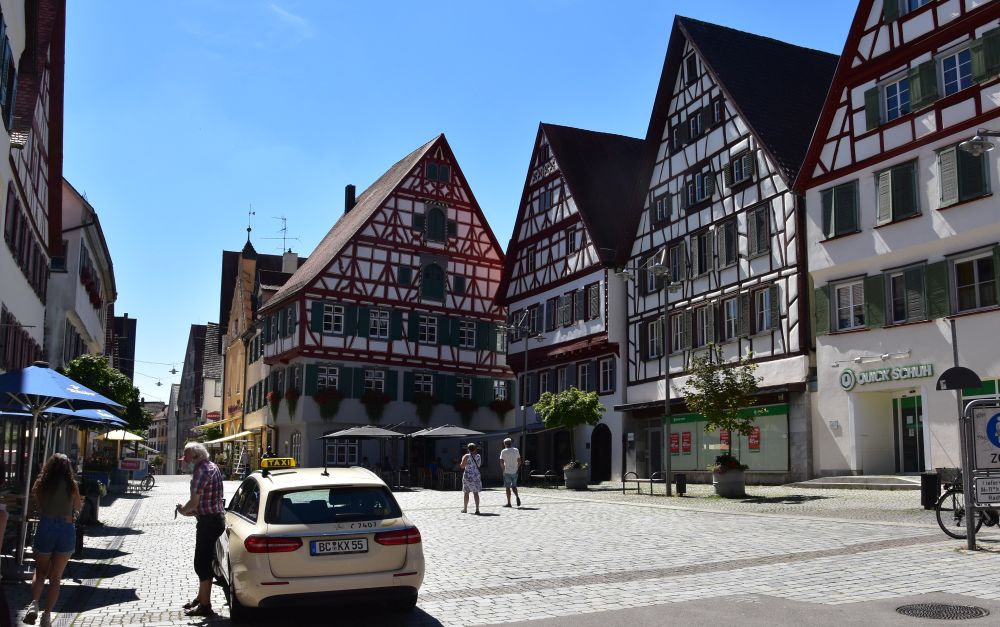 Amidst many cyclists on their tour along the Danube, we find a table in the shade and have an ice cream.

Refreshed we continue our way north.

Our next stop will be at Ulm, where we plan to stay overnight.

Sources: Wiki entry about Riedlingen and home  site of the city.