In November 2018 we spend three weeks not far from Tarragona.

Let us quickly recapitulate, what happened in the Maestrazgo and in Morella in Perucho’s novel “Las historias naturales”(see separate blog): In 1840, during the first Carlist War, the protagonist, liberal Antonio de Montpalau traverses the mountains of the Maestrazgo in search of the vampire, alias El Mochuelo, alias Onofro de Dip de Pratdip. Montpalau and his followers are captured by the conservative Carlist troups and taken to Morella, where the general of the Carlists, Ramón Cabrera, has his headquarter. Cabrera had been bitten by the vampire. Later Cabrera with his troups leaves Morella for Berga, where Montpalau will help Cabrera escape from the gloomy fate of becoming a vampire.

We descend from Port de Torre Miró. Approaching Morella from the north, we see the medieval city towered by the castle. Actually, the whole City, with the walls surrounding it, might be part of the castle.

It looks like the nest of an eagle, as Perucho writes: “el escarpado nido de águilas realista” (p. 172, at that time occupied by the royal (realista) Carlists). Like Perucho, I could imagine King Arthur having resided here (p.181): “Llegando por la carretera de Monroyo…, uno cree estar ante de una de aquellas ciudades del Rey Arturo y de los caballeros de la Tabla Redonda, adecuadísima para albergar el Santo Grial”. (Arriving on the road from Monroyo…, one thinks to stand in front of one of those cities of King Arthur and His Knights of the Round Table, well suited to keep the Holy Grail). Furthermore, Perucho compares Morella to Mont Saint Michel in France, just without the sea around it.

We park our car along the town wall and stroll through the narrow, cobbled streets. “Morella tiene mucho carácter,” Perucho says (p. 178, Morella has much character). It was an important city connecting the Ebro valley and the coastal planes around Valencia.

Strolling through the medieval city with its palaces

The strategic position of Morella is reflected in numerous palaces. The palace of the Cardinal Ram (built in the 15th century) is now a hotel.

Another Gothic palace has belonged to the Marquès de Cruilles. 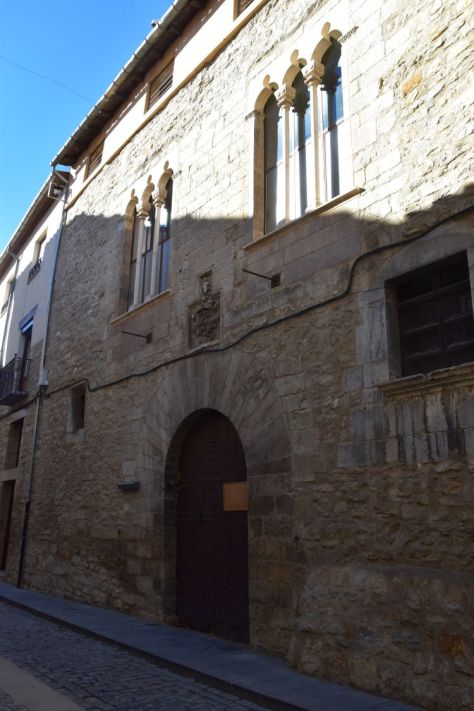 Next door is the Casa Rovira. In 1414, Vincent Ferrer, a famous Dominican friar and preacher from Valencia, stayed in this house on his way to meet the antipope Benedict XIII and the Spanish king Ferdinand I (Vincent wanted to convince the antipope to abdicate, in which he did not succeed). The hosts of the Casa Rovira agreed that for Vincent they would prepare a meal made out of the best they owned which was their son. When being served the meal, Vincent understood, what had happened, did not eat, but revived the son successfully – the boy now lacked only one finger, because the mother had tried the meal before serving it. Vincent Ferrer later became Sant Vincent. Legend mixed with reality, explained on these ceramic tiles. 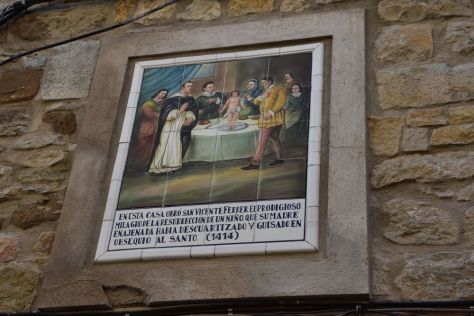 Now I look forward to seeing the famous apostle portal of the Gothic church Santa Maria La Mayor (built around 1300). Here it is, hidden because of renovation. Bad luck. 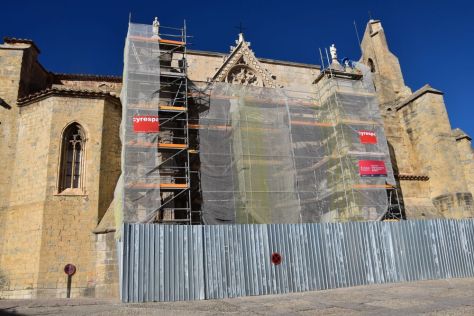 Next to it, the virgin’s gate is still waiting for renovation.

Perucho’s description of this church is very much to the point (p. 182): “La cathedral es una joya de piedra profusamente esculpida y con un coro construido de manera ingeniosa, en medio de la nave” (the cathedral is a jewel made out of stone lavishly sculptured and with a choir constructed in an ingenious manner, in the middle of the nave).

This is the ingeniously constructed choir elevated in the middle of the nave and decorated with the representation of the Last Judgment.

Spiral stairs with magnificent sculptures explaining the life of Jesus are leading up to the Choir.

The Convento San Francesco with its Danse Macabre

Above the cathedral we buy tickets for the Convento de San Francesc, now in ruins. This is the Gothic cloister. 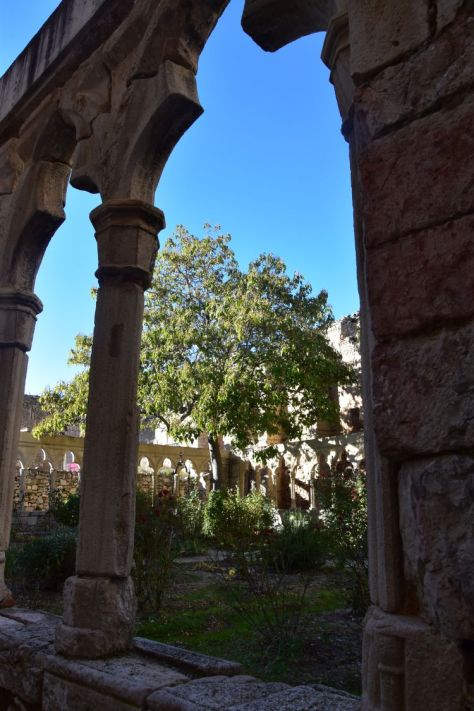 We admire the Danse Macabre. Every one will be the victim of godfather death – and they are all sitting on this tree.

Climbing up to the castle with Cabrera in mind 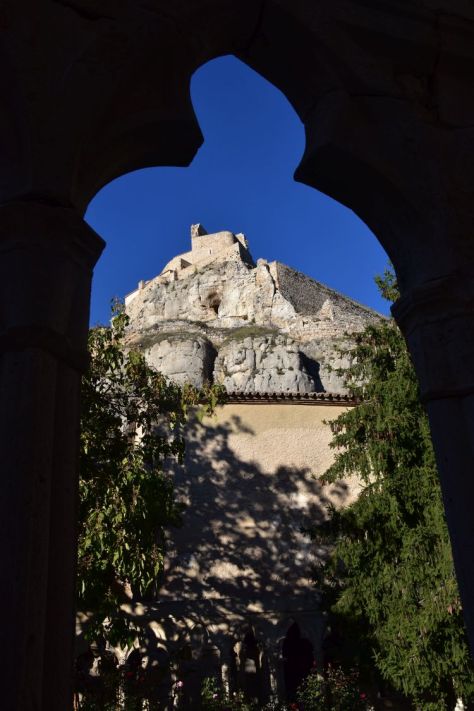 “Who is this man?” a family father asks, “ah, hm, Ramón Cabrera, okay”, and he makes selfies of Cabrera with his children and his wife. Yes, Ramón Cabrera, the Carlist leader, has the honour to greet visitors of the castle still today. The castle was his headquarter in the First Carlist War. Cabrera had the title “Count of Morella” and his surname was “the Tiger of the Maestrazgo”.

Walking up to the castle I notice that there is no direct way up. I have to go around the rock, until I reach these steep stairs with high steps. A young man approaching the top of these stairs sighs “Madre!” Come on, you are much younger than I am… 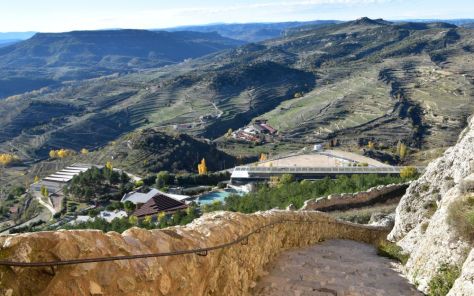 From the top of the castle I enjoy the gorgeous view. It is almost impossible to approach Morella without being noticed from here. And with the clever system of defensive walls protecting the castle on top of the steep rock, it seems almost unconquerable.

I can well imagine, how Cabrera and Montpalau sat on one of the terraces of the castle and had a coffee, with the magic view of the stone city at their feet: “Una tarde, mientras tomaban un café en una de las terrazas del castillo, con el mágico visto de la ciudad de piedras a sus pies, …” (p. 183). 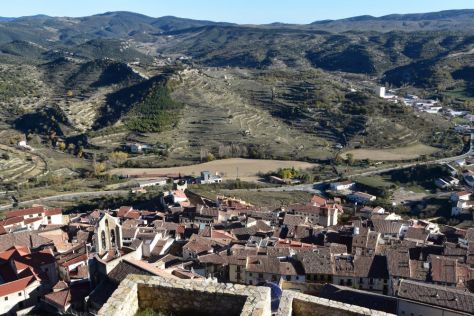 Not much later after that coffee break, Cabrera left Morella with most of his troops to retreat north to Berga. They did so early in the morning. It was very cold then and they intended to reach the warmer Ebro valley as quickly as possible. “Cabrera y el ejército emprendieron la marcha al rayar el alba. Hacía un frío que pelaba, y la tropa… llevaba tapabocas. El Maestrazgo era una región terrible y necesitaban llegar a la cálida ribereña lo más pronto posible.” (p. 190). My guidebook says that temperatures in winter can feel as low as minus 20 degrees centogrades, as wind and frost are cumulating.

Soon after Cabrera had left Morella, Baldomero Espartero (who fought for the cause of Queen Isabel II) conquered the castle and elevated the conservative flag of the Queen on the castle.

Zooming I can see the medieval aqueduct from the 14th century that up to the 19th century provided Morella with water from the near mountains. I believe that I see a ditch behind the aqueduct.

This is the gate closest to the aqueduct (seen from inside the city) that gave the unfriendly welcome to the Prince Lichnowsky.

Wrapping up the visit of Morella

After having visited the castle, we walk back through the city…

… and evaluate the woven blankets with the typical pattern of Morella. 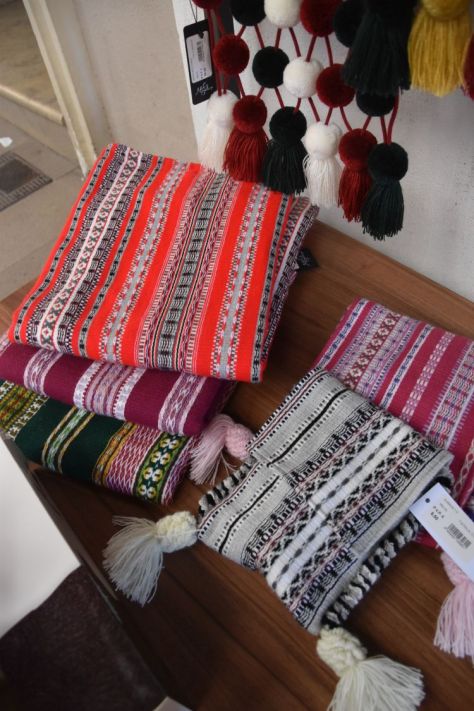 All blankets that we looked at, were made out of synthetic fiber containing some 10 or 20% of pure wool. Not what we had expected. We buy some sweet specialties instead, flaons and mantecados.

We stop at the beautiful townhall dating from the 15th century. 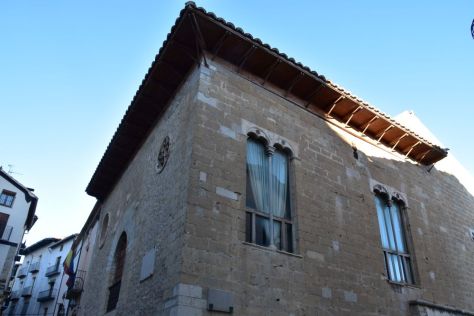 Inside the courtyard we find some giants (used at Corpus Christi) and a film of the Sexenni that the town celebrates every six years to commemorate the end of the plague in 1672.

We return to the town wall to pick up our car. We notice a heavy fine behind our wiper for having parked where only those authorised are allowed to, not foreigners like us. On this busy Saturday with many cars parked all over, we had not noticed the prohibition sign… but we find it okay to leave some money to support the ongoing renovation in this charming town.

In the evening we unpack our souvenirs, the flaons and the mantecados. 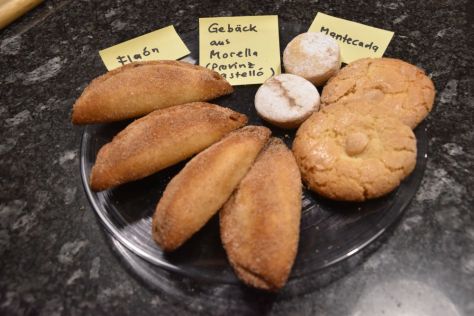 The sweets accompany our afternoon coffee times. From our selection of sweets, our favourites the larger mantecados with the almond in the middle.

Yes, Morella is worth a visit.

Morella in Wikipedia and tourist home site of Morella