In November 2019, we spend four nights in Pamplona on the Agra River exploring the City and the treasures in the Cathedral Santa Maria La Real and in the Museum of Navarra.

The Cathedral of Santa Maria La Real is located above the river Agra. The church was built in the 14/15th century and is of gothic style. The choir with the stalls is in front, which makes the nave open and uncongested (differing from many Spanish cathedrals, where the choir is in the middle of the nave impeding the view of the overall beauty of the nave).

The statue of Maria from the 12th century sits under the silver baldachin.

Carlos III the Noble and his wife are buried in front of the choir. The15th century tomb slab made of alabaster has been beautifully carved. Carlos III is the king that managed to make peace between the local Navarrese and the “foreign” Franconians. The latter had immigrated to Pamplona in the 11th century and had kept on living in a town district of their own, even separated by a town wall. Carlos III mediated between the antagonists, pulled down the wall and constructed the townhall at the former borderline. With respect, I look at him.

And with respect, his subjects mourned, as the beautiful small statues around the tomb illustrate.

In the gangway to the cloister, I find this elegant spiral staircase.

The filigree arches in the cloister seem to dance. 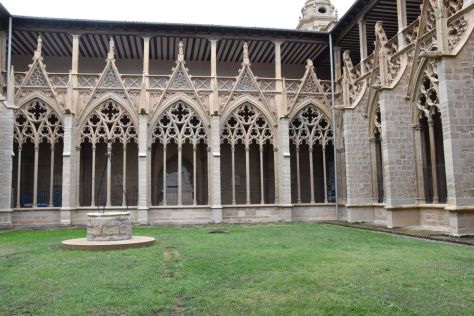 Bishop Barbazán was buried in the chapter house in 1355. A small angel seems to adjust his cushion carefully.

The refectory looks like it was a stylish place to eat. It was built around 1300 and measures 30mx10m.

Nearby is the kitchen from the 14th century, with the long-long chimney. 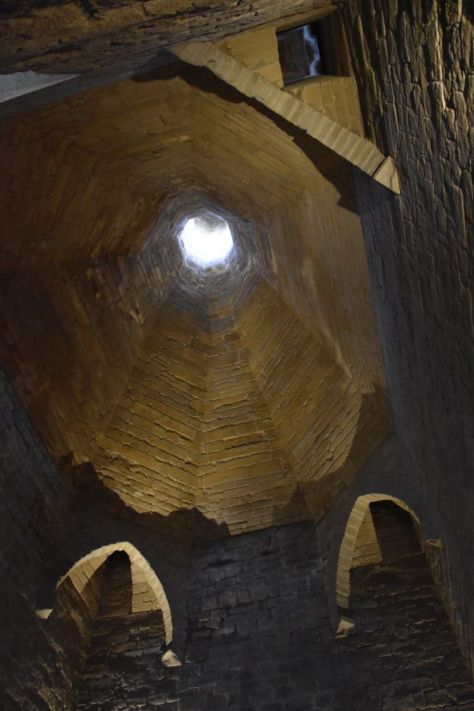 Attached to the cloister is the Museo Diocesano with the exhibition “Occident” that illustrates the history of Christian culture in Europe.

The Museum of Navarra

We spend a full day in the Museum of Navarra that shows exhibits from archaeology and art that are related with the history of Navarra from prehistoric times until today.

The Museum is located in a former hospital. On the terrace, we find a great view of the Pyrenees and the city.

In the halls about Romanesque, we study Hiob’s fate in detail. Maestro del Claustro de la Catedral de Pamplona created it in the 12th century. The happy days of Hiob, his fall and his resurgence are illustrated on all four sides of the column. This is Hiob living happily with his family and his animals.

I very much like the elegance of this ox and donkey, a fragment from a nativity sculpture from the Cathedral of Pamplona.  Maestro Estebán made it in the 12th century.

The ivory case “Arqueta de Leire” has been carved by Maestro Faray in Córdoba during the Umayyad Caliphate (up to 1031). It shows fine hunting scenes. The representation of human beings and animals is unusual for Islamic work of art. The case is from the Monasterio de San Salvator de Leyre. One of the inscriptions says “En el nombre de Allah”. 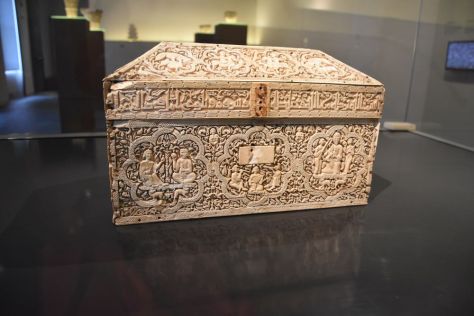 Goya painted a friend of his, Marqués de San Adrián. A noble young man in elegant velvet trousers. He has taken off his hat which creates an atmosphere of casualty and confidentiality.

The Museum is proud of their Mapa de Abauntz. Never have I seen a prehistoric map engraved on a stone. It is the most ancient map ever found, about 13’000 years old. Abauntz is a cave located about 25km north of Pamplona.

Panels explain what archaologists found on the map: Rivers, mountais and places for hunting goats (cabras) and other animals.

These maps are not as easy to read as the Swiss topological Maps of today… I admire the imagination of the archaeologists.

From the necropolis of Castejón (about 80km south of Pamplona), this charming horse shaped urn cover has been brought to the Museum of Navarra.

We spent a full day in this interesting Museum of Navarra – to be recommended! Especially on the rainy days that we experience now.

Next we explore the surroundings of Pamplona, Punta de Reina and Laguardia.