In November 2019, we are traveling through France to Spain. From our first stop in Spain, Roncesvalles, we drive to Pamplona, with a stop over in Zubiri. 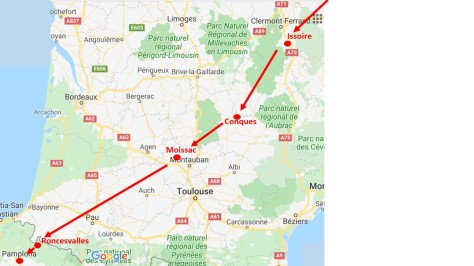 From Roncesvalles, the road leads over two passes. The rainfall never stops and we feel compassion with the humpy pilgrims that, hidden under their rain capes (covering their back bags as well), bravely walk along the path of St. James crossing the main road from time to time. It has been raining for a week now, and there is no end in sight for at least another week. I do not know, whether I would feel like joining the pilgrims walking in the rain. I am pretty sure that I prefer to remain dry in our car, while our windscreen wipers go “swish-swish-swish”. 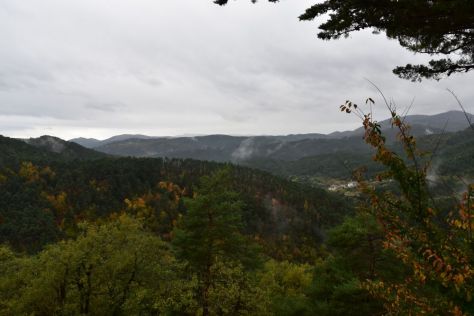 The villages on the way are full with guest houses for pilgrims. Good business, since the 11th century.

Zubiri is known for the medieval Puente de la Rabia over the river Agra. The Way of St. James crosses the bridge.

The bridge cures animals suffering from rabies – this is the legend. It seems that relics of Santa Quiteria, a martyr from the second century, have been found here. She would calm barking dogs and for this reason, she became known for curing rabia. Somewhat interesting. Nevertheless, I would not miss vaccination against rabia, when traveling to countries, where I could come across it, even after having been on this bridge.

People cross the rabies bridge with their umbrellas. Yes, it IS raining.

After Zubiri the valley opens and the mountains recede. We reach the basin of Pamplona.

Pamplona – known for their bulls

In Pamplona, we settle in the business hotel Los Tres Reyes, conveniently located, where the old city begins. Three kings, this alludes to the union of the kings of Navarra, Castilia and Aragon.

The city is known for bullfighting. In July (Sanfermin), the bulls run from their corrales through the narrow streets of the city center to the bullfight arena. Young men dressed in white with red scarves and red belts run with them, a pretty dangerous event. That is reflected in the shops. They sell the typical outfit and they also remind of Hemingway who has described Sanfermin in his novel “the sun also rises”. 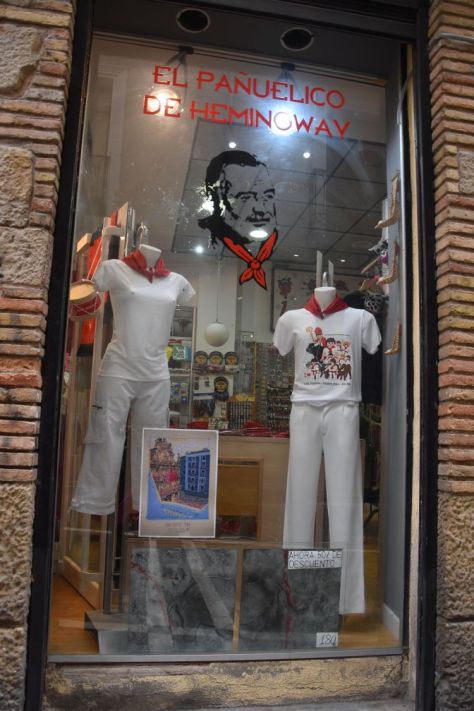 This is the entrance to the bullfighting arena.

Bullfighting is not really for me… I fell in love with Pamplona for other reasons, namely for the nice old town that invites for strolling and for all the works of art we found in the Cathedral and in the Museum of Navarra. Let me talk about some impressions in the city center first.

Strolling through the old city center of Pamplona

Not far from our hotel, St Francis welcomes us on the namesake square. He seems to have a discussion with this wolf. 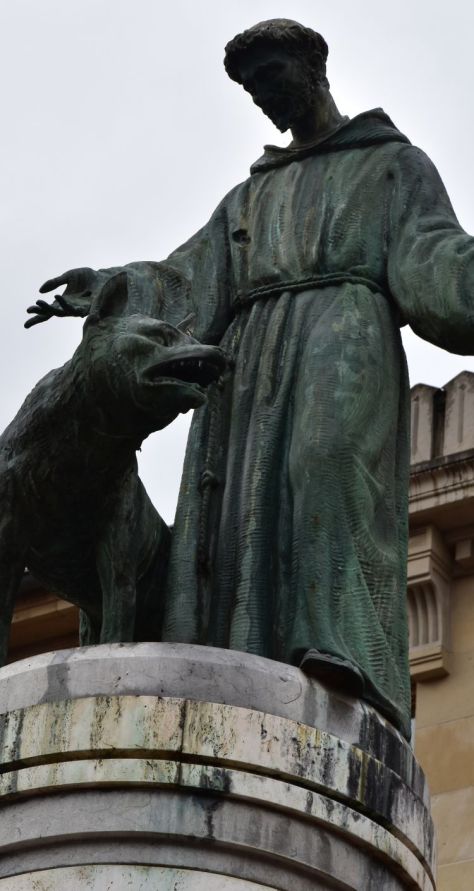 There are various Palaces in the city, with the Tribunal de Cámara de Comptos Reales being the oldest. It was built in gothic style in the 13th century. The public finances are controlled here. 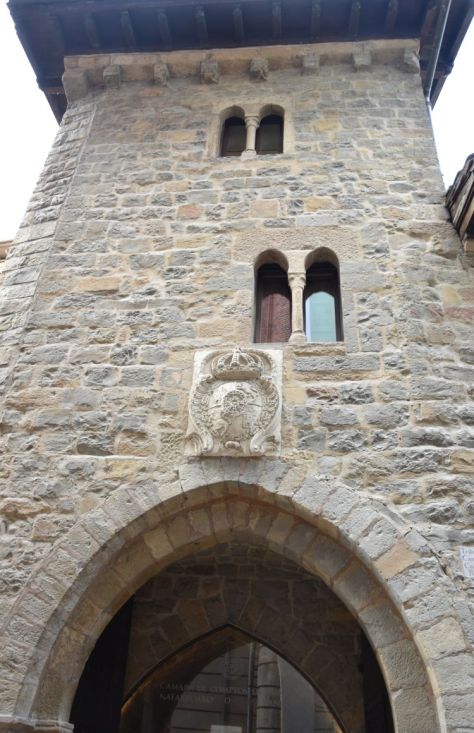 The town hall or Casa Constitutional was constructed by Charles III the Noble in the 15th century at the point where two city districts fighting one another had their frontiers. In one district lived the Navarrians, in the second district the Franconians. Charles III is called “the Noble”, because he succeeded to mediate between the two antagonizing parties. The town hall was reconstructed in the 19th century, but the baroque facade was preserved.

The Romanesque church of San Saturnino is from the 12/13th century.

It is of defiant stance. This is the tower with the narthex.

Inside the narthex, the tympanon above the porch presents the Last Judgment with Paradise and Hell.

A service is going on inside the church. We attend it for a little while. The priest in front of the altar wears a red gown. The altar is decorated with white flowers. What a solemn atmosphere under the sober Romanesque vaults!

We leave the service and continue to walk through the narrow streets. Never before have we seen so many draperies and in some of them tailors are working at their sewing machines. 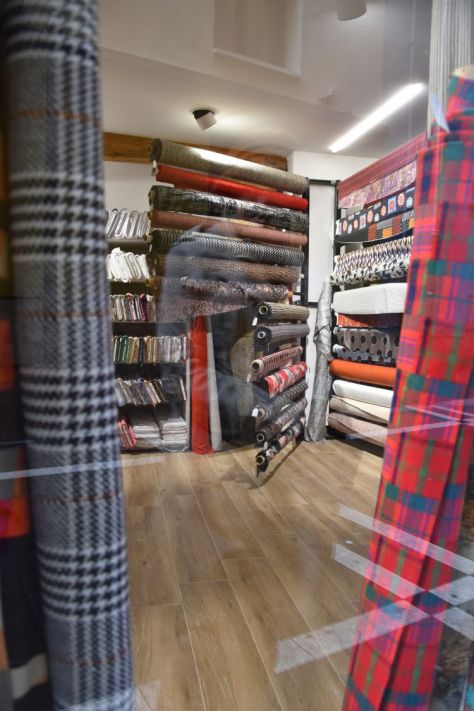 This backyard has been turned into a vegetable garden. What a great initiative.

The habitants call it “Pipparika” which might be Basque.

Inside the city, we find many small bars that sell pintxos (called tapas elsewhere in Spain). Great for short breaks, when strolling through the streets.

Walking along the fortifications of Pamplona tops our visit. It was the Spanish-Habsburgian king Philipp II who had fortified the city in the late 16th century, because he feared a French invasion. Part of the wall and the bastions have been kept until today and allow for a nice walk with a great view of the Pyrenees. 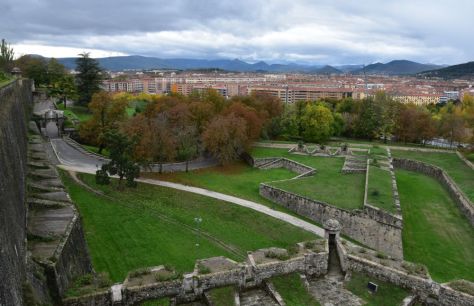