From September 26th to October 10th 2019, I was in Uzbekistan discovering the country and visiting the oasis cities Samarkand and Bukhara with its blue cupolas that has always been a dream of mine. Let us first explore the geographical location of Uzbekistan.

Uzbekistan touches the north western mountains of the Himalaya

Uzbekistan is in Central Asia, touching the last north western mountains of the Himalaya massif.

Uzbekistan is far, far away from the oceans – it is a double locked country. That is, it only borders countries that also do not have access to the oceans. Though benefiting from rivers originating in the mountains, about 75% of Uzbekistan are desert or half desert and only about 10% can be cultivated.

Uzbekistan is a “Mesopotamia”

Zooming in Uzbekistan, we can see that it is located in the Aral Sea Basin between the rivers Syrdarya and Amudarya. 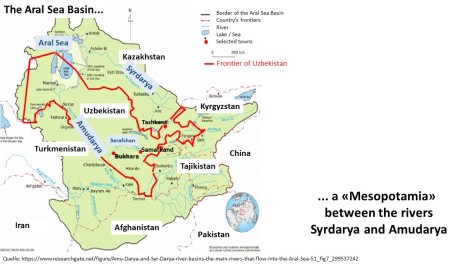 In a way it is a “Mesopotamia” or a country “between two rivers”, and there are even more rivers coming from the north western mountains of the Himalaya massif, one of them being the Serafshan, where Samarkand and Bukhara are located. They were important oasis cities on the old Silk Road from China to Europe. The Amudarya and the Syrdarya both supplied the Aral Sea with water – the past tense is correct here!

Water has become a problem in Central Asia

On the topographical map above, the Aral Sea still is large and blue. But today, the Aral Sea has diminished dramatically and the Amudarya now drains away in the desert, while the Syrdarya still feeds the Aral Sea – or what is left from it. This is an environmental catastrophy caused by the cotton cultivation that has been intensified since the late 19th century.

There are more issues related with water, as the rivers originate in the neighbouring countries of Uzbekistan. The neighbours have built dams which deviate water before it reaches Uzbekistan. I do hope, the Central Asian countries find peaceful ways to manage their water supply. In one case, Uzbekistan benefited from the Chardarya irrigation dam in Kazakhstan. In the late 1960-s, there were heavy rainfalls, the dams had to be opened in Kazakhstan, and the water filled the Arnasay lowland in Uzbekistan. The Lake Aydarkul north of Samarkand and Bukhara emerged. On our tour, we stopped here to eat fish and to enjoy the birds and the sheep near the water.

Uzbekistan is a multi-ethnic nation

Looking at the frontiers of Uzbekistan, I suspect that there must have been political reasons for this layout. The country looks like a man with “two legs” reaching into the neighbouring countries. While Tajikistan is mainly of Persian origin, Kyrgyzstan, Kazakhstan, Turkmenistan and the Uzbeks belong to the Turk peoples. Uzbekistan is a multi-ethnic country, whereby about 70% are Uzbeks, 5% are Tajiks and another 5% are Russians. The other ethnics are Kazakhs, Uigurs and many more. We noticed in the Nuratau mountains, in Bukhara and in Samarkand that many people are bilingual Persian and Turkish-Uzbek, besides speaking Russian and now more and more English. When looking into history later, we will see that Samarkand and Bukhara were important cradles for the Persian as well as for the Uzbek culture. Our tour guide said, yes, we are multi-ethnic, but we accept and integrate them all. I do wish success to Uzbekistan – as a Swiss I am used to our four languages and many, many self-confident “individual” dialects.

Our tour through Uzbekistan

On our tour through Uzbekistan we visited the Chimgan mountains in the small strip between Kazakhstan and Kyrgyzstan north east of Tashkent, the desert Kyzylkum (red sand desert), the Nuratau mountains south of the Lake Aydarkul, the capital Tashkent and the blue oasis cities Bukhara and Samarkand. I will talk about impressions from the landscape, about the history of Uzbekistan mirrored in  world history, and about the cities that we have visited – with their blue cupolas.