The church of Arlesheim is called “Cathedral” or, in German, “Dom”. Until some years ago, I had always wondered, why. Oh sure, the “Arlesheimer Dom” was more richly decorated than other churches around here. Moreover, it was surrounded by palaces, but why is there a Cathedral in the suburb Arlesheim, so close to Basel with its own Cathedral, the Münster?

Let us dive into history to understand why – and then let us look at this Rococo gem.

Why is there a Cathedral at Arlesheim?

Up to 1529, Basel with its Cathedral or Münster was the seat of the Basel Bishopric. Then, the city of Basel joined the reformation. The “Basler Münster” became a protestant church, and the bishop had to leave “his” city with “his” Cathedral. The bishop ended up residing in Pruntrut (Porrentruy) and his Chapter moved to Freiburg in Breisgau, some 50km north of Basel. At that time , Breisgau belonged to Austria (Vorderösterreich). However, in 1677, Louis XIV conquered Freiburg (during the winter pause in the Franco-Dutch War) and occupied it until 1698. In 1679, the bishop of Basel, Johann Konrad I von Roggenbach (1656-1693), decided to move his Chapter from Freiburg to Arlesheim, which was part of the Roman-Catholic Bishopric of Basel.

In 1660, Bishop Roggenbach marked the border in the forest above Arlesheim. This is his coat of arms. 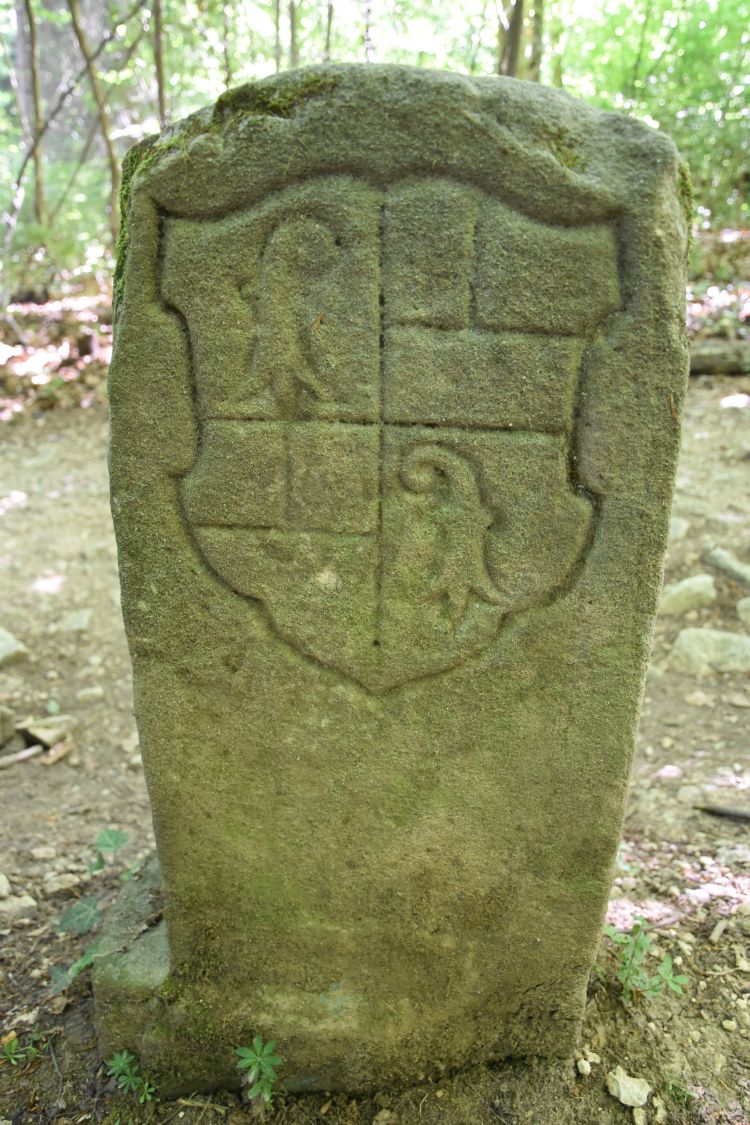 Roggenbach marked the border of the Prince-Bishopric “against” the protestant town of Basel.

This is border stone number 67 and above, we find another such stone, number 70. When walking in the area, I like to show the stones to my friends.

The existence of the vineyard Schlossberg may have supported the decision to move the Chapter to Arlesheim. The church always needs wine for the worship, or – in addition – anyway. 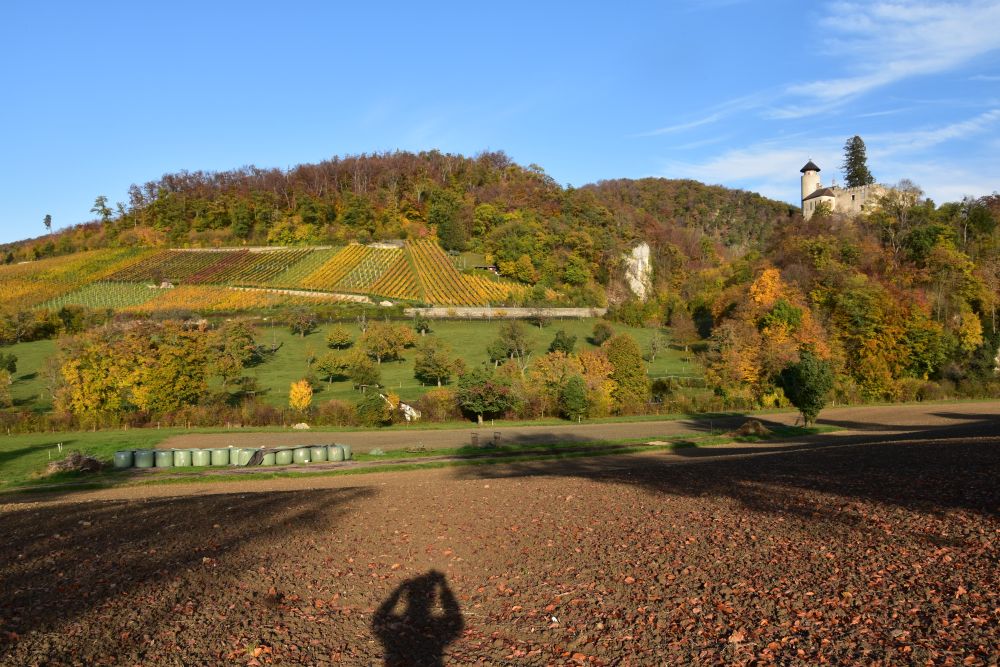 This is the view of the vineyard Schlossberg and the ruin Birseck belonging to the mystic landscape park Ermitage.

Immediately from 1679-81, Bishop Roggenbach and his Chapter built the Cathedral of Arlesheim in Baroque style. Later, from 1759 to 1761, it was reconstructed to become the elegant Rococo church that we see today. The architects were Bagnato father and son. Appiani painted the frescoes, and Pozzi created the stucco work. All were from the Ticino or near Italy (see Georg Carlen).

One of the targets of the Cathedral reconstruction was to bring more light into the nave. The artists succeeded, I believe: The frescoes and the stucco work shine solemnly in the sun.

The organ adds to the solemnity. Built by Johannes Andreas Silbermann from Strassbourg in 1761, it has been restored in 2006. 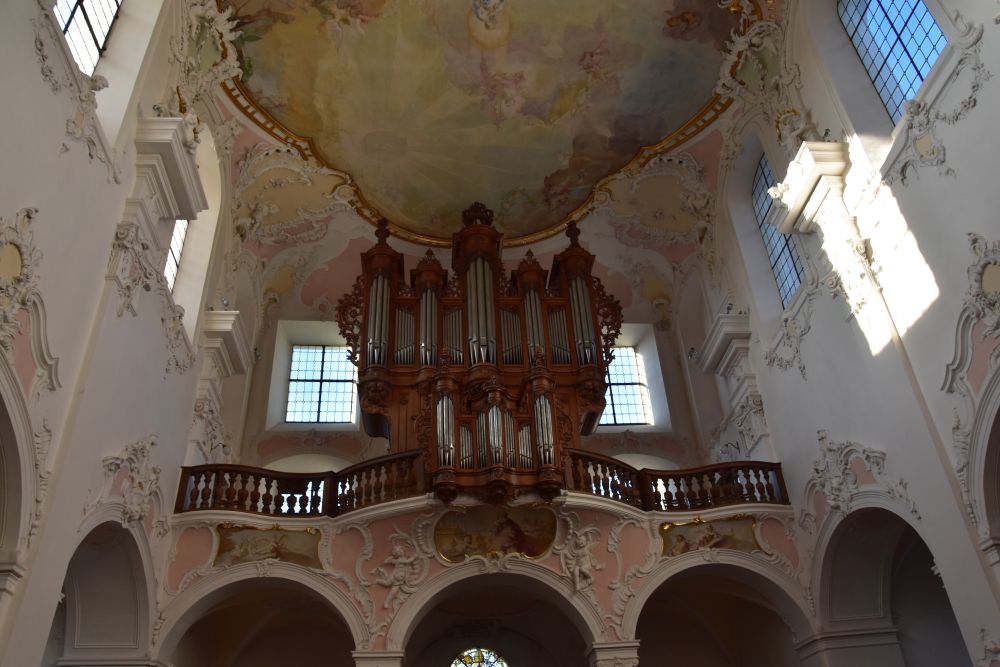 It was Bishop Joseph Wilhelm Rinck von Baldenstein (1744-1762) who initiated the reconstruction of the Cathedral of Arlesheim in 1759. Also this bishop marked his borders. One example is this “Rinckenstein” above Ettingen (border with Solothurn). 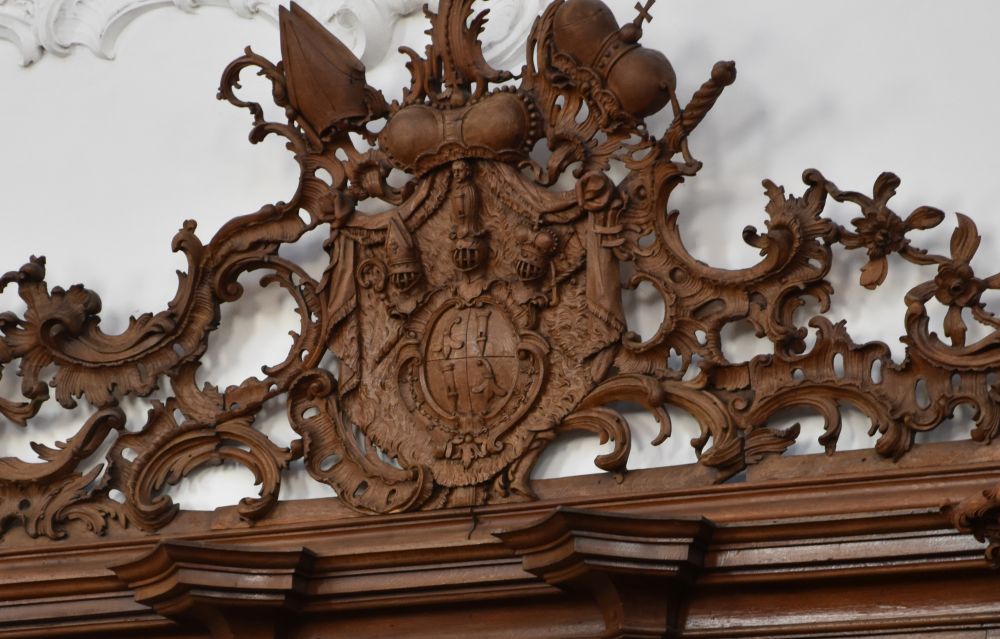 … and above the entry. 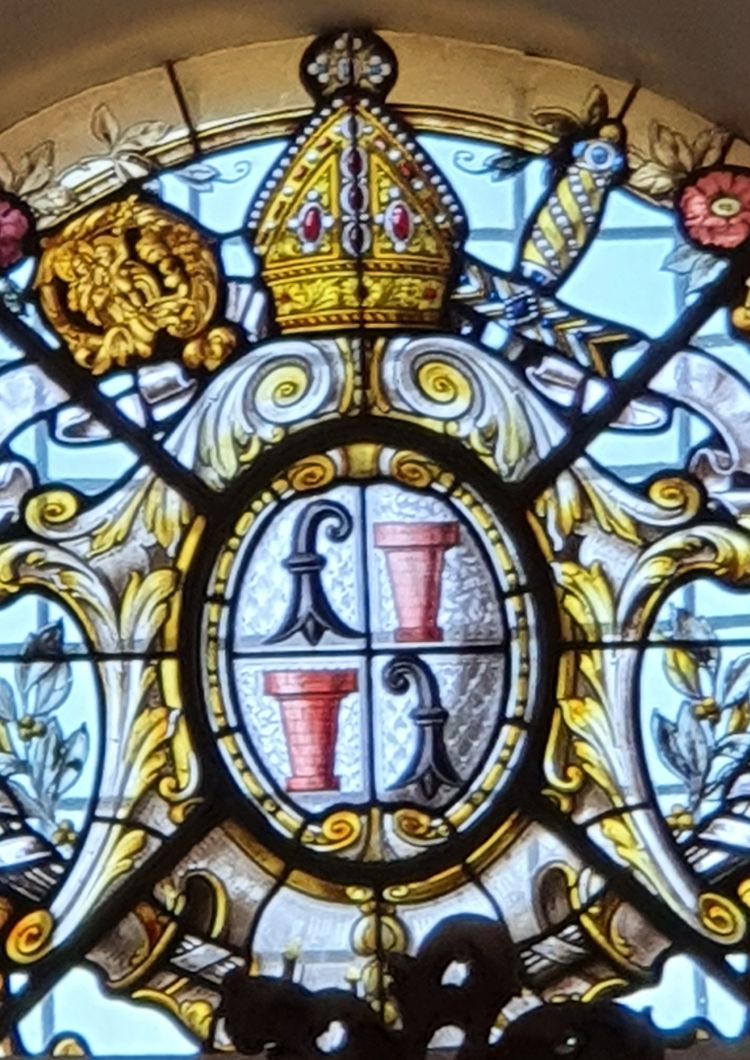 Bishop Rinck von Baldenstein and the members of his Chapter – might have felt homesick for the Cathedral of Basel that their predecessors had to leave in 1529, when the city became protestant: The royal couple Henry II and Kunigunde appears on the altar fresco, but other than in Basel, the couple presents the new Cathedral to Mary. 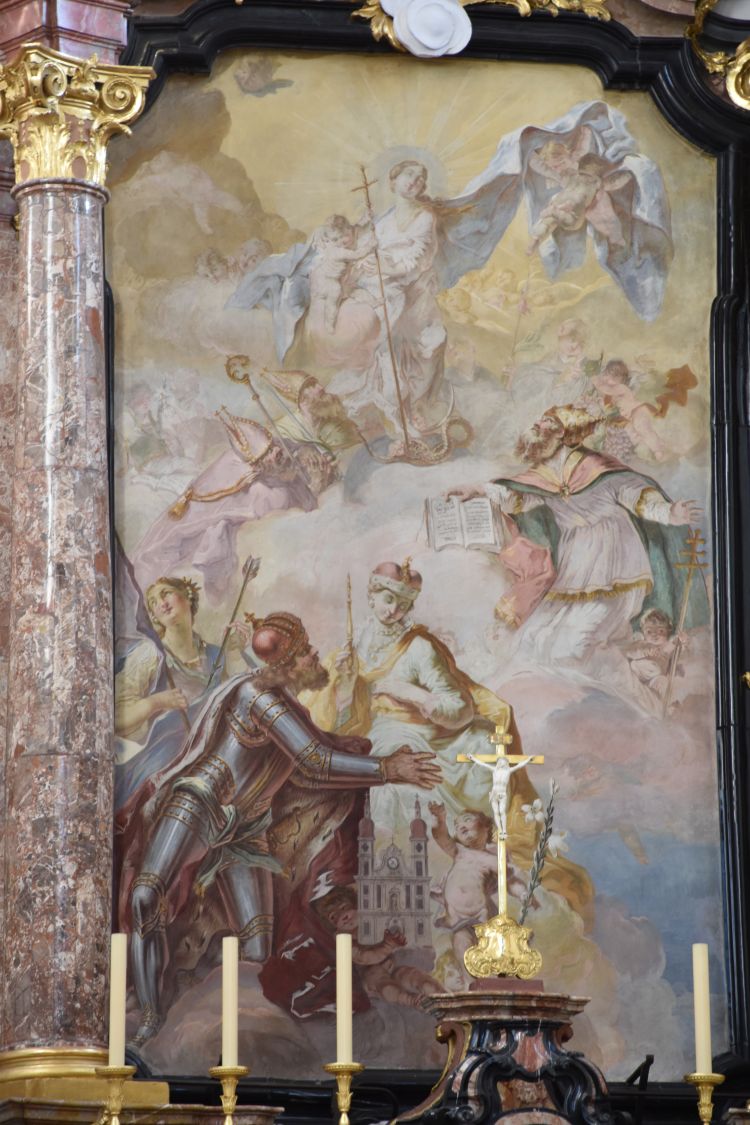 The royal couple presents it to Mary of Victory that wears a white dress and a blue plaid. She places her right foot on the neck of the snake and she presents Jesus that uses his cross to pierce the head of the snake. Mary and Jesus are joining their forces to fight the snake or the Satan that stands for the evil.

The Cathedral of Arlesheim is dedicated to Immaculate Mary, as the inscription above the choir indicates: “Divae Virgini sine labe conceptae” (to the Divine Virgin conceived without original sin).

Also the Cathedral of Basel was dedicated to Mary. She once stood on the pedestal at the main gate, but was destroyed during the iconoclasm and since then the pedestal has remained empty.

Mary is the central figure of the main fresco in the nave. She stands on a white cloud. Above her are Christ and God Father. Above them all is the Holy Spirit as a pigeon surrounded by rays of light. The divine scene is painted in soft colours.

The continents have assembled to praise Mary, and the “real” world is painted in powerful colours. Directly under Mary is Europe, flanked by America and Africa to the left, and by Asia to the right:

The fresco in the choir shows Mary’s Ascension. She sits on clouds that are carried upwards by angels. The apostles stand around the empty tomb. “Josephus Appiani Pinxit” (Appiani has painted it) has been written on the sarcophagus.

Also near the choir is the scene of the Annunciation, where Archangel Gabriel tells Mary (in the blue coat) that she will give birth to Jesus.

Directly under the organ, we see Saint Cecilia. She is a martyr from Roman times and the patron of music and of the musicians. A good match with the beautiful organ which is the only Silbermann organ left in Switzerland. 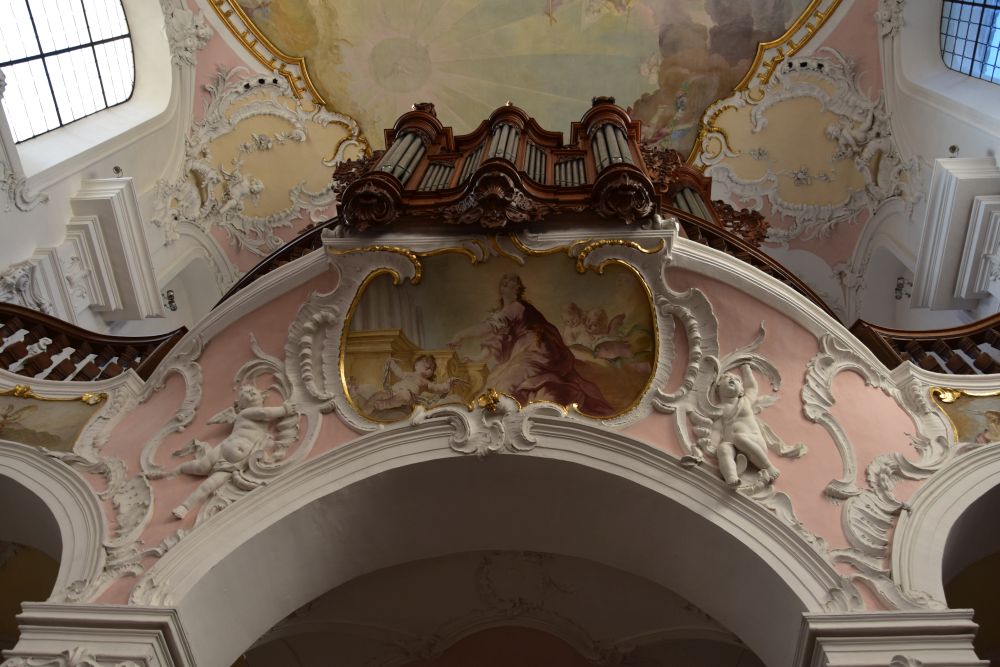 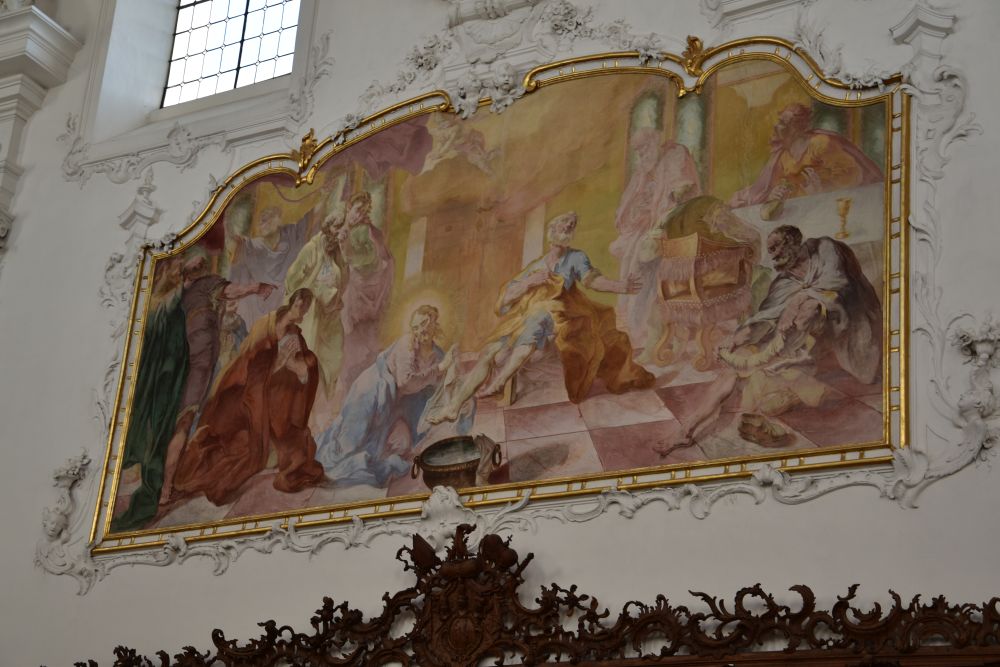 … of the Last Supper.

These two frescoes may have been carried out by Appiani’s workshop (“The Cathedral Arlesheim”, p.24).

The stucco decoration is in harmony with the frescoes

The stucco decoration made by Pozzi is Rococo or “style rocaille”, a term that alludes to mussels (coquilles). 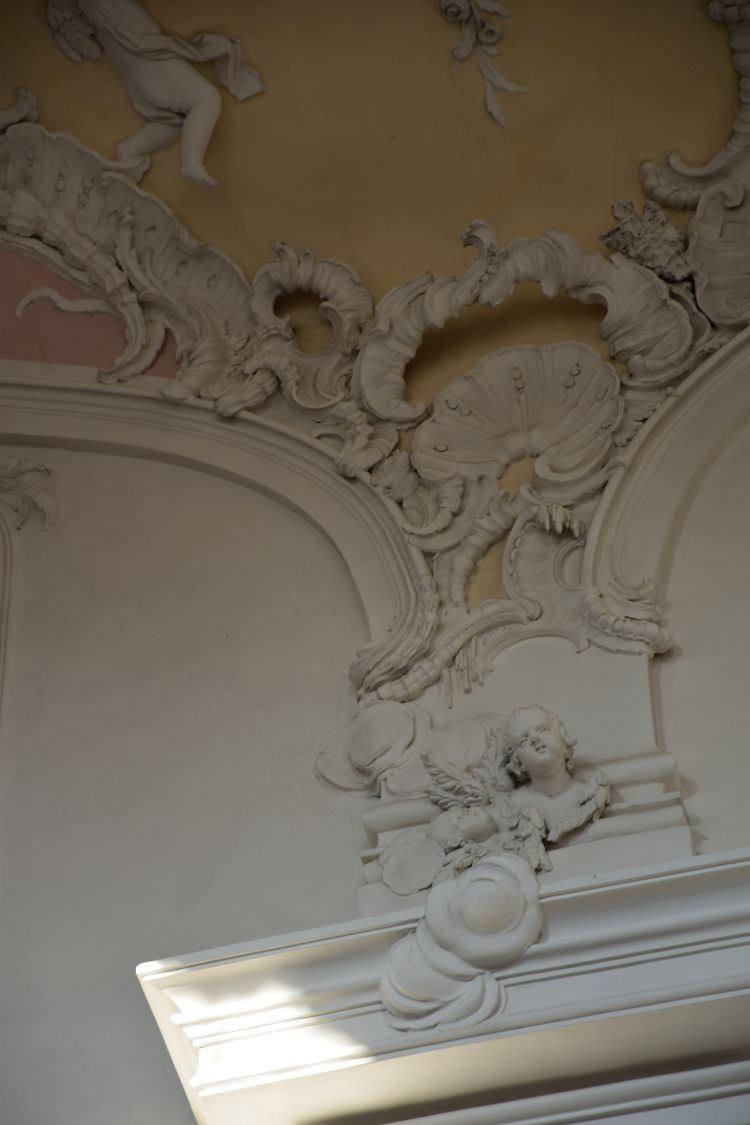 The stucco decoration gives airiness to the nave.

I include some photos of the putti that carry symbols of Mary, the pure lily,… 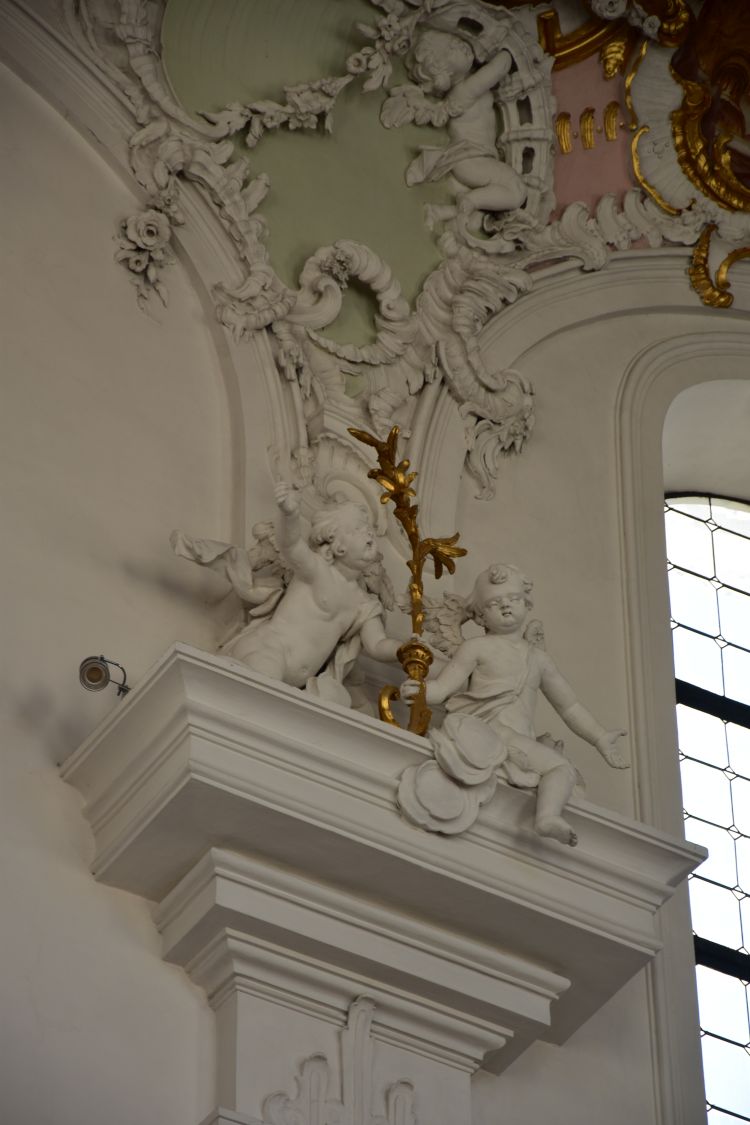 During the reconstruction of the Cathedral in 1759-61, Peter Schacherer from Rheinfelden contributed the carpenter’s work, such as the choir stalls and…

The small balcony is made out of marble from Italy.

Also the columns framing the altar are made from Italian marble.

Odilia is the patron of the blind (meaning those who cannot see “outside” nor “inside”).  The gothic statue of Odilia from 1450 has been made from limewood.

Around 700 AD, Odilia was the abbess of the monastery Niedermünster (Odilienberg) in the Alsace. The bishop of Basel acquired Arlesheim from Niedermünster in 1239. There is a legend that tells us, Odilia hid from her father in a cave and some say, this happened in one of the caves above Arlesheim. The former parish church of Arlesheim was devoted to Odilia and the parish of Arlesheim still carries her name.

When working at this blog, I began to understand the connections between the two Cathedrals of Arlesheim and Basel. The patrons of both Cathedrals are Henry II and his wife Kunigunde. The royal couple had originally sponsored the Cathedral of Basel around 1000 AD. On the altar in Arlesheim, the same royal couple asks Mary to now protect the new Cathedral.

Both Cathedrals have been dedicated to Mary, but in the protestant Cathedral of Basel, the statue of Mary at the main portal has been destroyed and has never been restored (the pedestal at the main gate is empty; there is still a statue of Mary in the gable). In Arlesheim, Mary is the main theme of the frescoes and the stucco decoration, and she also stands above the entry gate. 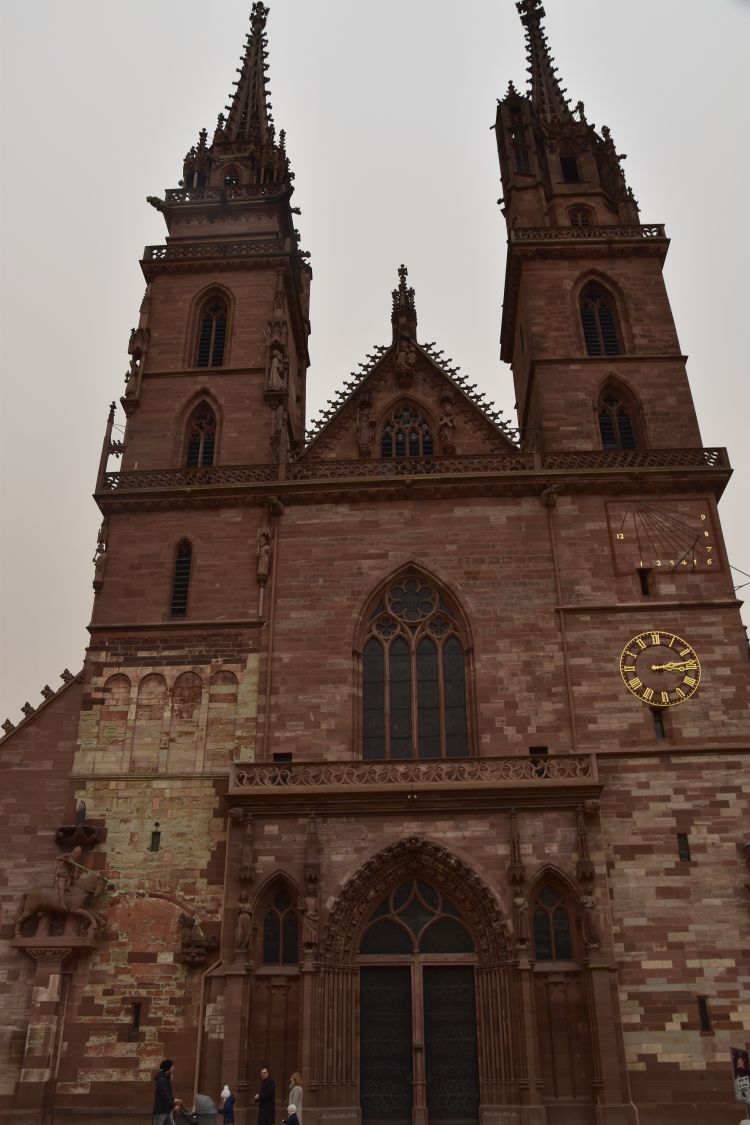 Until the reformation (1529), the members of the Bishop’s Chapter lived around the Cathedral Square (Münsterplatz) in Basel.

Until the French revolution (1792), the members of the Bishop’s Chapter resided around the Cathedral Square in Arlesheim.

Two gems so close to one another!