In April 2022, I discovered charming Delémont:

After having presented my first impressions of the welcoming atmosphere of Delémont, I will now tell you about wild men and the Renaissance fountains at Delémont.

Have you noticed the coat of arms of Prince-Bishop Jakob Christoph Blarer von Wartensee (1575-1608) on the Renaissance fountains?

Let us explore, why the coat of arms appears here.

The medieval city centre of Delémont is located on a hill above the Sorne, within the red rectangle on the map below. I have marked some of the main sights such as the Museum, the Town Hall or the Castle (Château). 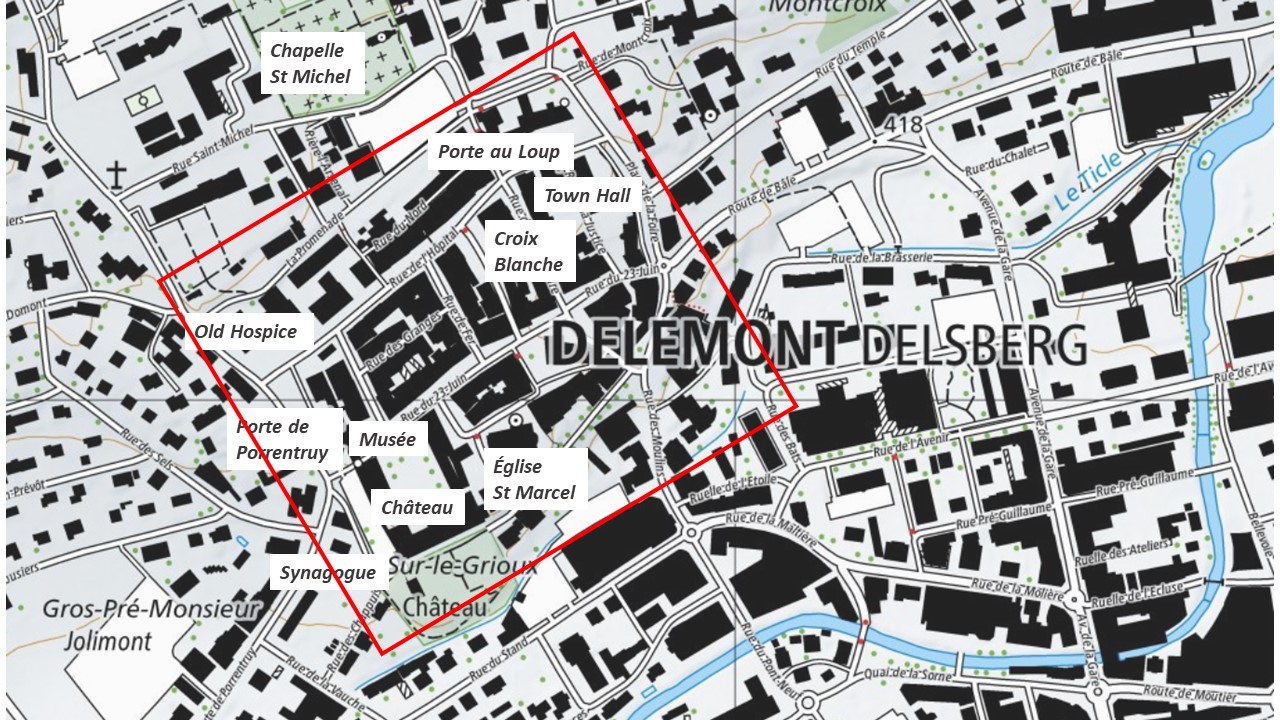 Source: SchweizMobil (online), my own additions of some sights

Let us look for wild men and Renaissance fountains in the medieval city centre.

In medieval times, the city was surrounded by a wall with four towers, only two of which are left.

The first gate is the Porte au Loup that we have already seen, when entering the city. Named after Monsieur Loup who lived here 700 years ago.

The second gate is the Porte de Porrentruy, also called Porte Monsieur. “Monsieur” Prince-Bishop used to enter the city here to get to his summer castle. 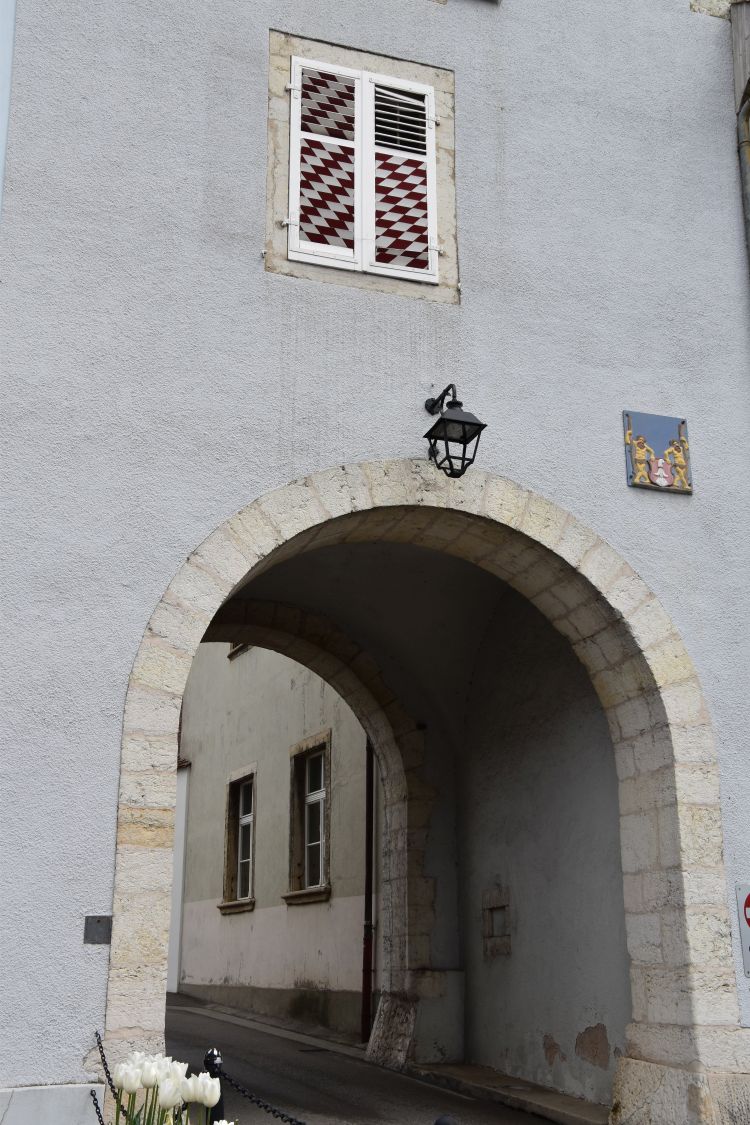 On both gates, two wild men are holding the coat of arms of Delémont.

This is the coat of arms above the entry of the Porte au Loup. 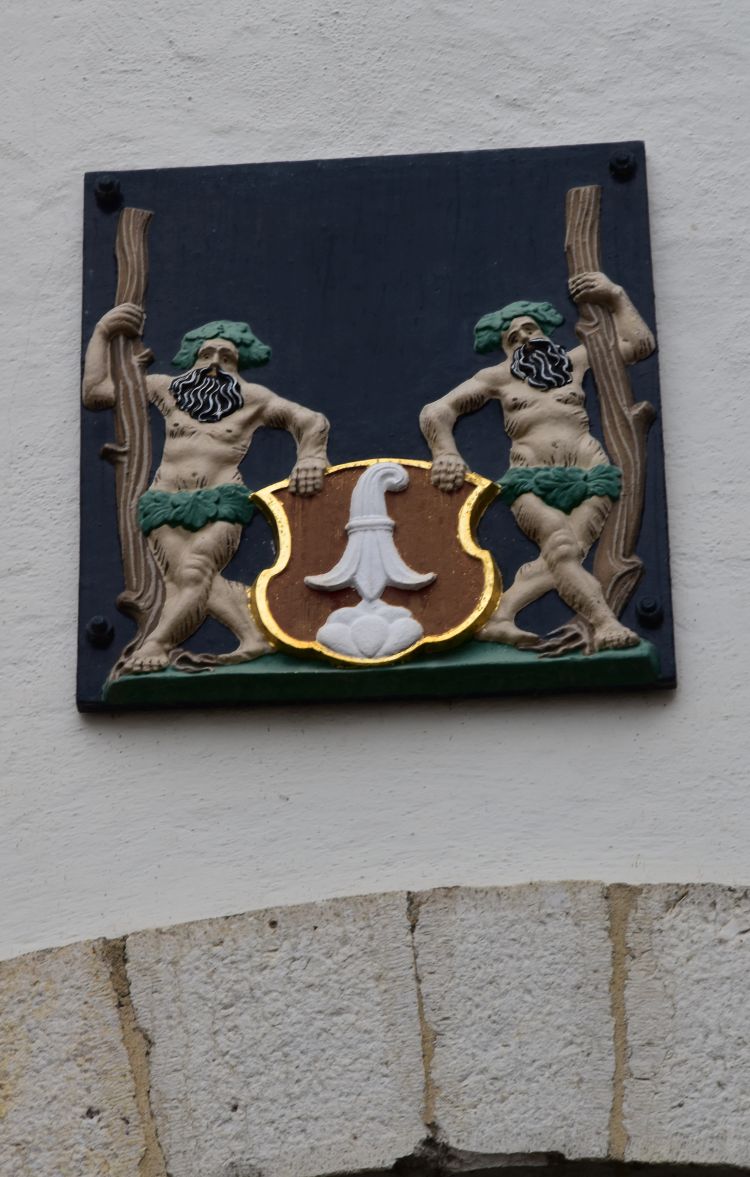 The coat of arms shows the bishop’s crook above the Jura hills around Delémont, white on red background. Actually the name “Delémont” alludes to mountains (“mont”).

I came across more wild men holding the coat of arms of the city. One pair of them is above the entry to the town hall.

Another wild man decorates the Renaissance fountain in front of the Musée Jurassien d’Art et d’Histoire. Also this wild man holds the coat of arms of Delémont. 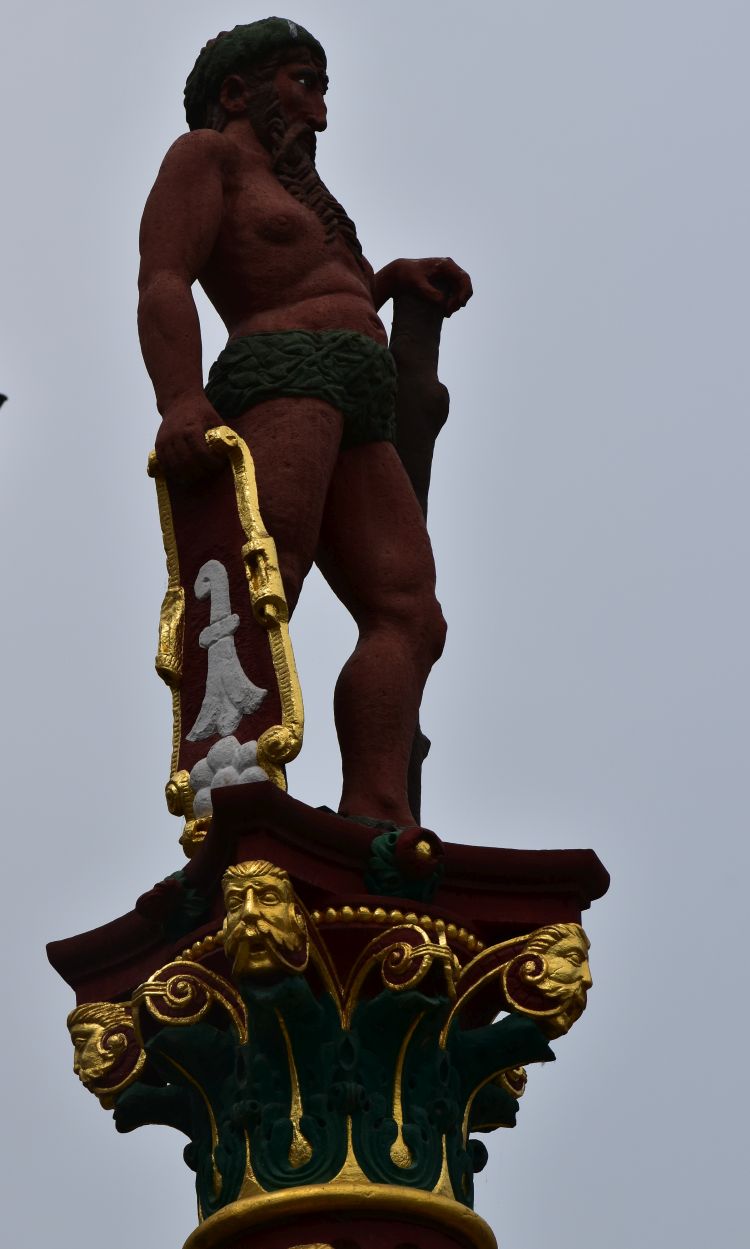 It was Prince-Bishop Jakob Christoph Blarer von Wartensee who had the wild man crafted in 1576, one year after his election.

There must be more wild men (“sauvages”) at Delémont: The treasure hunting app Drallo motivates children to find all of them and to redeem the premium at the Croisée des Loisirs (near the train station).

Googling, I learn that “wild people” (Wildleute, either men or women) were popular supporters for coats of arms (see for instance Roger Rebmann’s altbasel.ch).

For the Prince-Bishopric, he was an excellent leader, he was somewhat the “reconquistador”. In the Musée Jurassien d’Art et d’Histoire, Pitch Comment summarizes his achievements as “Reconquista”. 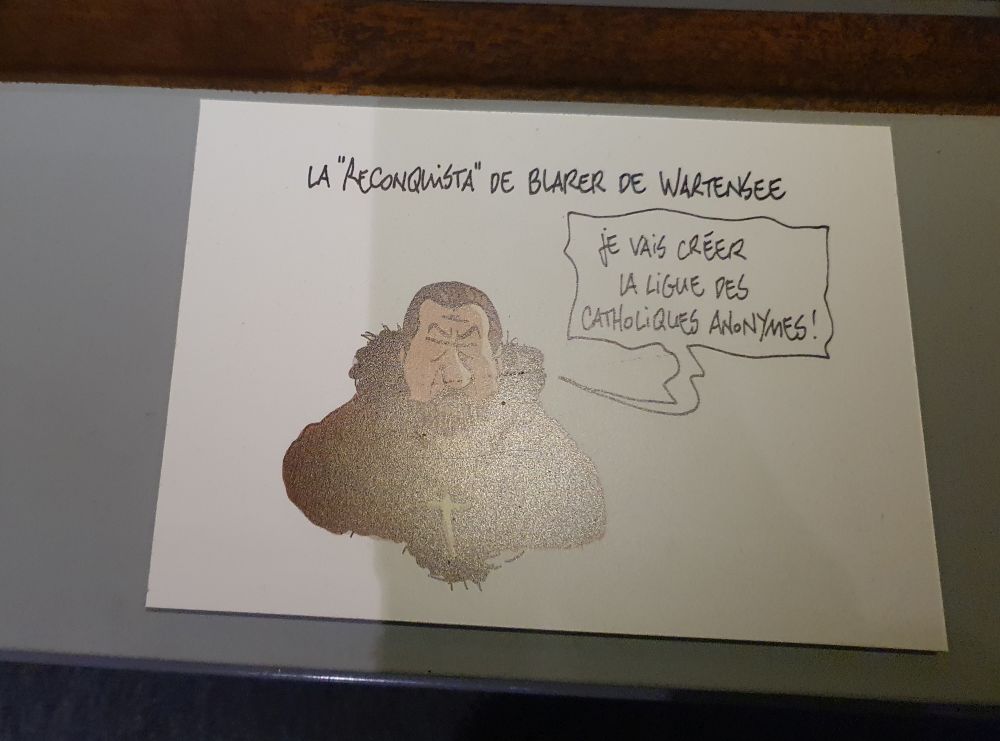 Source: My photo taken at the museum

“Reconquista” refers to the Reconquista of the Iberian Peninsula by the catholic church, completed by the royal couple Isabella and Ferdinand a hundred years earlier.

Delémont was the summer residence of the Prince-Bishops, and Blarer von Wartensee decorated it with a series of Renaissance fountains, one of them being the fountain of the “wild man” mentioned above. Let us look at more of his fountains.

The fountain of Maria

The fountain of Maria decorates the town hall. 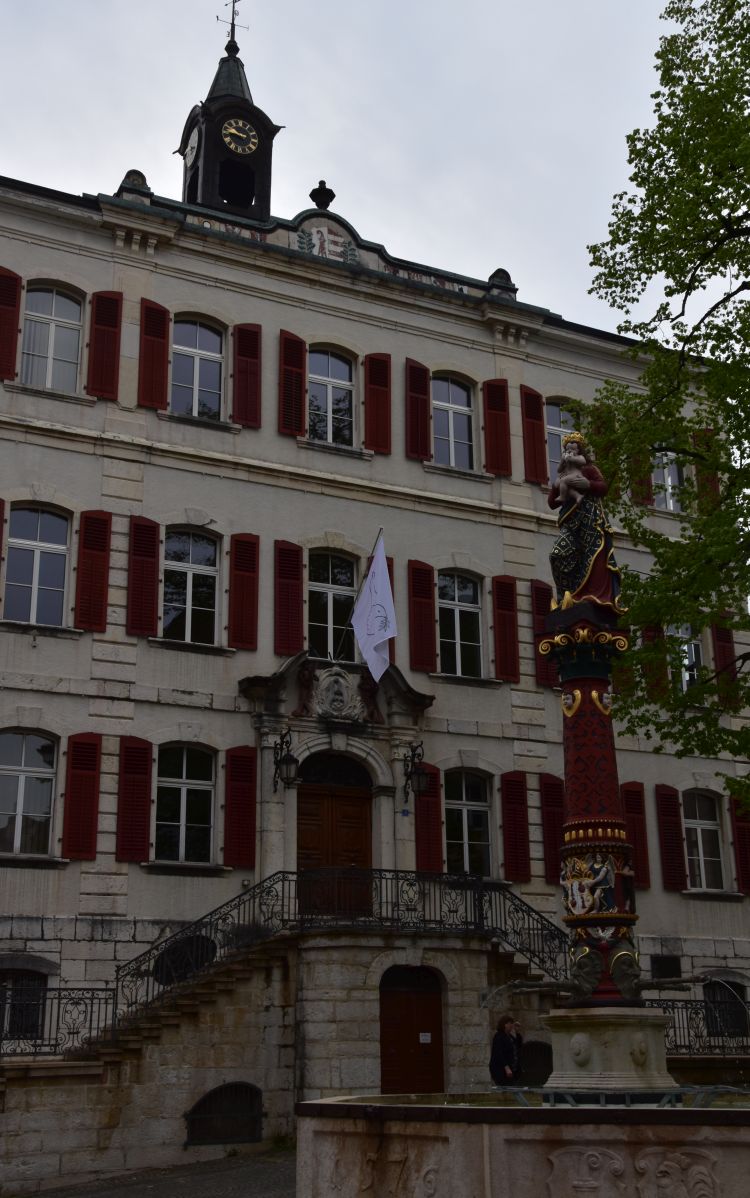 Difficult to take a photo of Maria between  the tree and the town hall (town hall built in 1740).

Maria was sculptured by Hans Michel in 1583. Maria replaced the wild man of 1576 that stood here before. The wild man was relocated to the Porte de Porrentruy, where we have seen it.

I have come across the sculptor, Hans Michel, before: Another of his works is the statue of Munatius Plancus that he created for the city of Basel (see below).

Prince-Bishop Blarer von Wartensee could not do without leaving his marks; his coat of arms decorates the fountain of Maria.

I know his cock from the castle of Porrentruy (where the Prince-Bishops settled, after having been chased from Basel, the cock is to the right of the bishop’s crook; see the photo on the site of Jura Toursime).

Furthermore, when hiking, I encountered the border stones of Blarer von Wartensee between Oberwil and Biel-Benken – this is one of them.

It also shows the cock, along with the bishop’s crook.

The fountain of the lion

Another Renaissance fountain presents the lion (1579). The lion holds the bishop’s crook. The cock of Prince-Bishop Blarer von Wartensee decorates also this shaft. 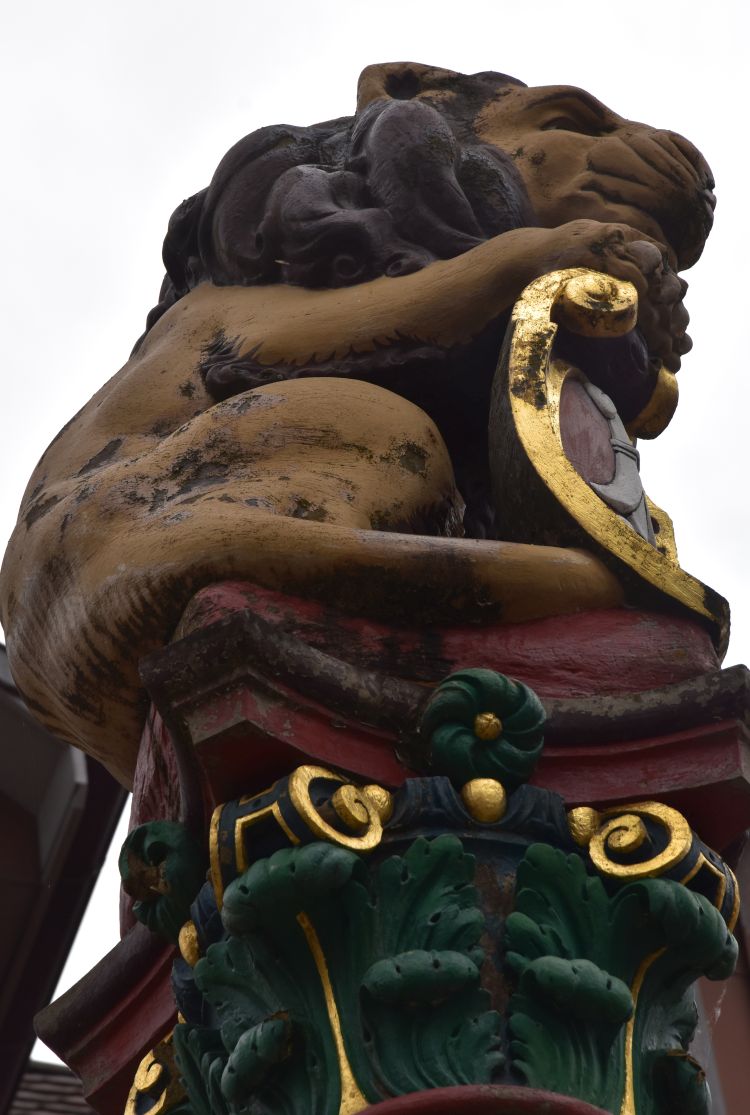 Lions are another common supporter of coats of arms.

The fountain of Saint Maurice

The fountain of Saint Maurice was erected in 1577, also by Prince-Bishop Blarer von Wartensee.

Have I not seen a very similar statue before? This Mauritius somewhat reminds me of Lucius Munatius Plancus in the courtyard of the Basel town hall… Pretty similar are the boots, the skirt and the coat. 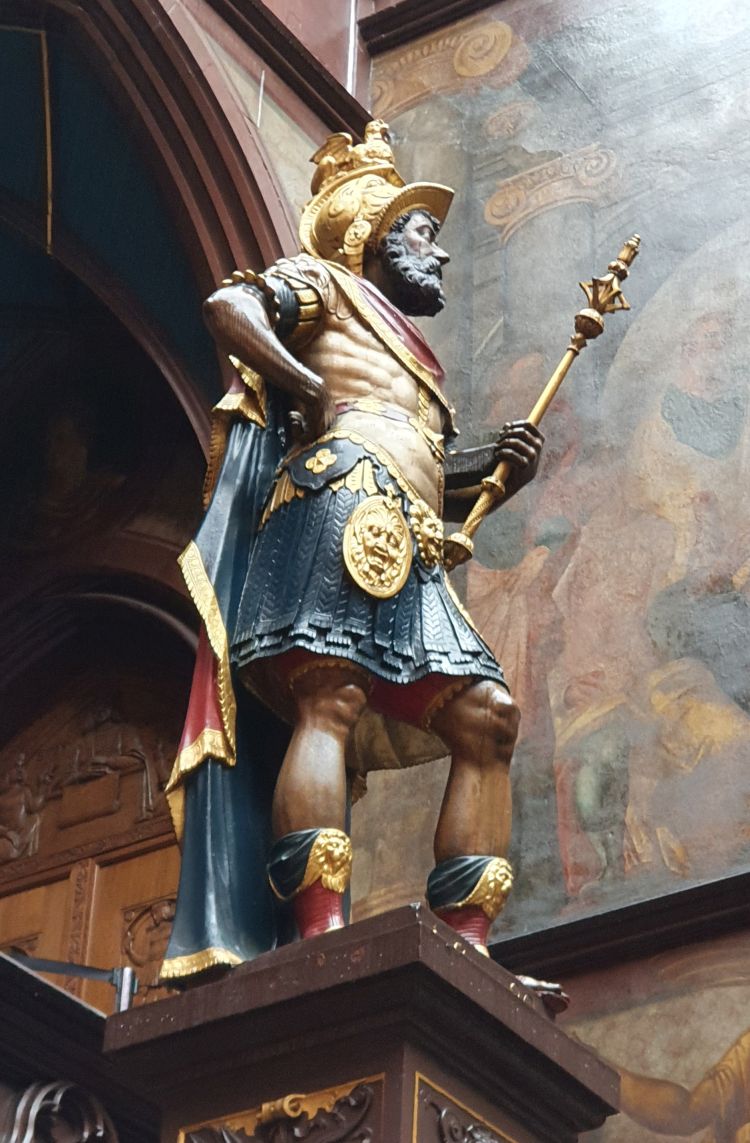 Yes, the tourism website of Delémont confirms my suspicions… Also Saint Maurice has been created by Hans Michel, like Munatius Plancus.

Anyway: Roman warriors looked quite a bit different from these Renaissance incarnations created by Hans Michel. Nevertheless, I like both Renaissance statues.

Saint Henry decorates this fountain from the 19th century in front of the old hospital. The statue of Saint Henry is from 1596 (see “Chronologie jurassienne”). 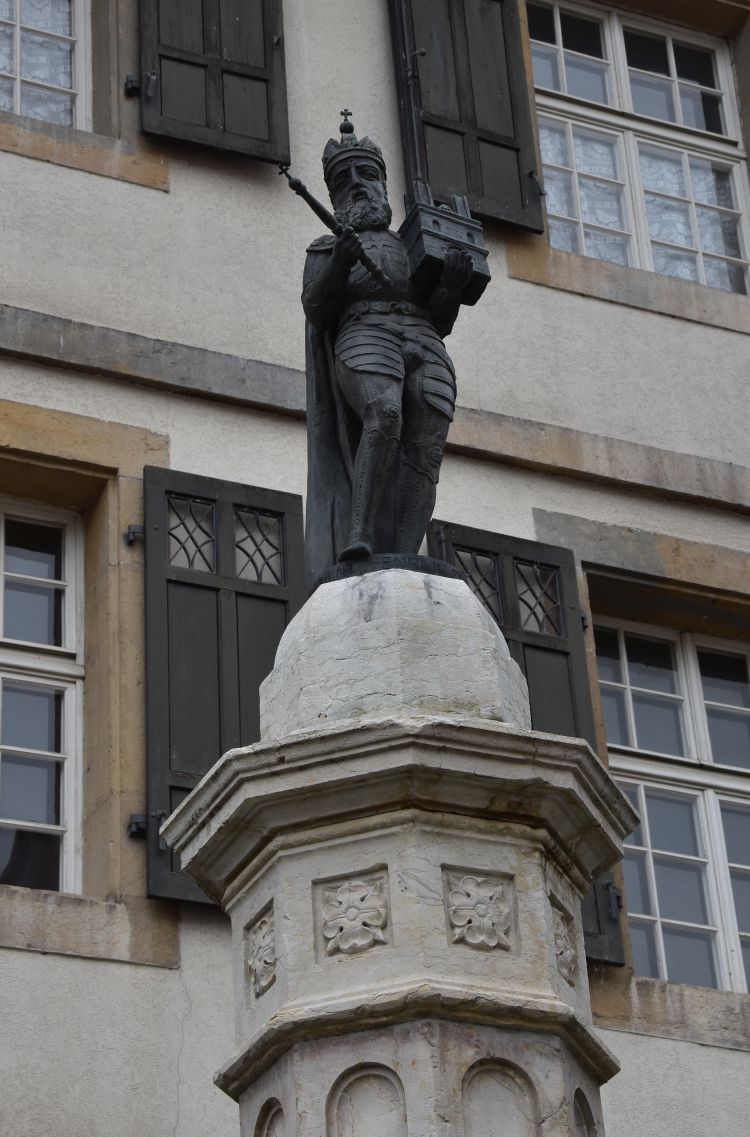 Saint Henry is the emperor Henry II of the Roman Holy Empire of German Nation around 1000 A.D. Saint Henry or Henry II was canonized by the pope in 1146. He had the Cathedral of Basel constructed. At Delémont, Henry seems to present the model of the Basel Cathedral, though, in 1596, it belonged to the protestants, no longer to the catholic Prince-Bishopric.

I have come across Henry II again and again: He and his wife Kunigunde decorate the façade of Cathedral of Basel (sculpture from 1290)… 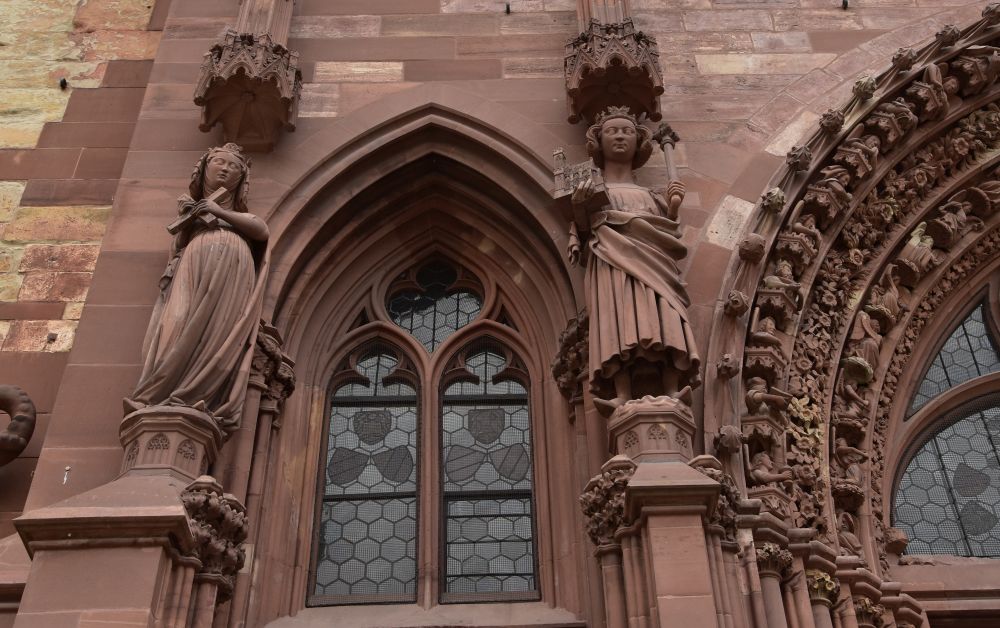 Henry is the patron of the Prince-Bishopric of Basel and of the city of Basel; another Henry decorates the clock of the Basel town hall.

In the next blog, I will continue with more reminiscences of the prince-bishopric of Basel and with the jurassic museum (Musée Jurassien d’Art et d’Histoire).