In the summer, the Gastof Solbad opens their garden bordering the Rhine. It is a great setting under a weeping willow. On a sunny day in June 2015, Andreas and Helga take their Nordic walking group to this idyllic place. 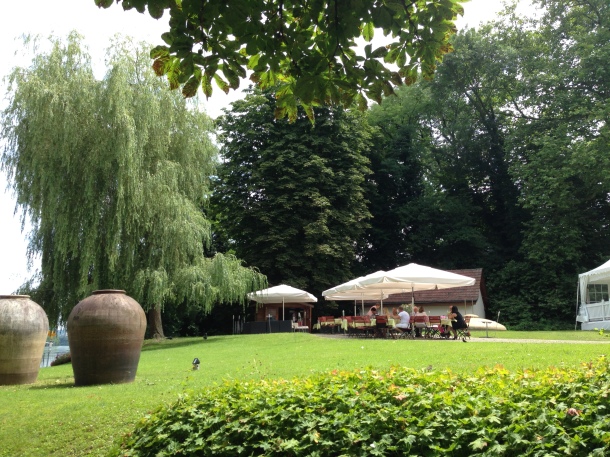 Our walk through the Hard and along the river Rhine (Rhein)

To get to the restaurant Solbad in Schweizerhalle, we have to cross the Hard. “Hard” actually means “forest”. We start in “Neue Welt”, walk along the river Birs, climb up to the Hard, oscillate a bit to make enough kilometers (10 to 15km) and then take the “Rheinpfad” that leads along the Rhine with posts of interest on the way. The restaurant Solbad is in Schweizerhalle.

The Hard supplies water to Basel.

As this panel says, water from the Rhine becomes pristine water (from the Rhine=Rhein, made pristine=”rein” – a game of words in German).  Rhine water is pumped up and then purified in filters.

The purified Rhine water is directed to water channels with gravel beds. It sinks to the ground and adds to the Hard groundwater. The clean water from the river and the ground is then transfered from the Hard to the Langen Erlen north of Basel that also has its own groundwater. From there it is provided to the town.

These water channels are part of the purification system in the Hard. They add to the romantic atmosphere that walkers find here.

There is a control system to feed the water channels. 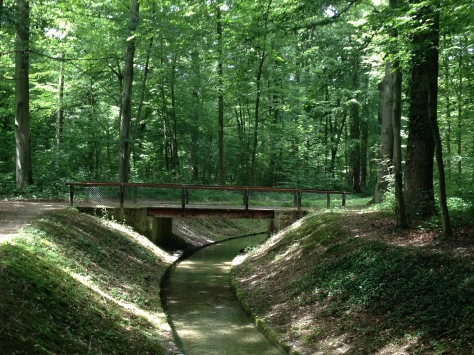 Along the Rhine: The Romans were here – and left their marks

This late Romanic watch tower borders the Rhine. It was built in the late 4th century, when the Romans came more and more under pressure by the Germanic and Alemannic tribes. Just the stone basement is left and has been preserved in 1975.

Dismantling of a huge industrial building in Schweizerhalle

Not far from the watch tower – when still walking in the woods – we hear a terribly loud noise. When leaving the woods, we see this huge industrial building that is now it being dismantled piece by piece. When walking by, we almost have to protect our ears.

Our last place interest is the “Schiffahrt mit Muskelantrieb” or “navigation driven by muscles” (named “Rothus” on the map).

These are the boats that are driven by muscles – we call them “Weidling” which is similar to a “punt”, as Wikipedia says.

Soon after this boats place we reach the garden of the restaurant Solbad and order a drink to cool down.

Thank you, Andreas and Helga, for having showed me some more secrets of Basel region. From the restaurant Solbad I walked back home the same way to enjoy it once more and take the fotos using my iPhone. I look forward to more treasure hunting with you.