On 15th of May 2019 – Wednesday – we explore the surroundings of Zamora, the visigothic church in El Campillo and the small country town Toro.

The receptionist of the Parador in Zamora was born in El Campillo. It is a small, quiet village and he remembered that in the late fifities, as a child, he saw the first tourist cars with the number plates “CH” and “D”. “Where are they from? Maybe “CH” is from Czechoslovakia and “D” from Denmark”, he reflected. Later he left his small village to study in Spain and to earn money in Switzerland (his Swiss accent was not bad).

He told us proudly of the visigothic church in his home village. This is San Pedro de la Naval.

A lady shepherd took his cows to the fields near this small gem and protected her head with a large black umbrella. The sun was already burning. 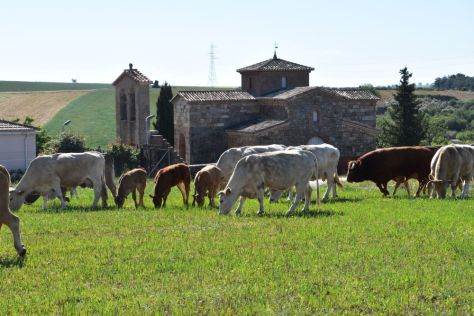 The church was built immediately before the Muslim invasion, i.e. shortly before 711 AD. Originally, it was located on the banks of the river Esla. The river was dammed in the 1930’s to gain electricity. One of the architects helped the people transfer the church and rebuild it stone by stone. The stones have been worked and accumulated without plaster. In the choir I recognize the typical horseshoe arch.

The capitals are ornated with figures,…

… and with floral patterns.

The base of the columns is decorated as well.

The church is open on Mondays, and the lady receiving us inside confirms: “Yes, Zacharias, he is a good ambassador for us, particuarly on Mondays, when the museums are closed in Zamora.” She is proud of her church and shows the details to the visitors.

Walking to the Esla Embalso

After having enjoyed culture, it is a good idea to walk to the lake Esla, where the small church would have drowned, if not saved by the inhabitants of El Campillo. This is the barrier lake with some white rockroses and yellow broom in the foreground. 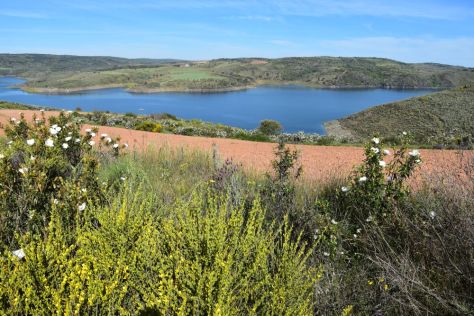 The fields have been prepared.

Everything is flourishing – it is spring and the hot summer has not yet arrived.

Toro to me looks like the little sister of Zamora. The Collegiate Church of Santa Maria la Mayor from the 12th century has a similar cupola above the intersection, like the Cathedral of Zamora. 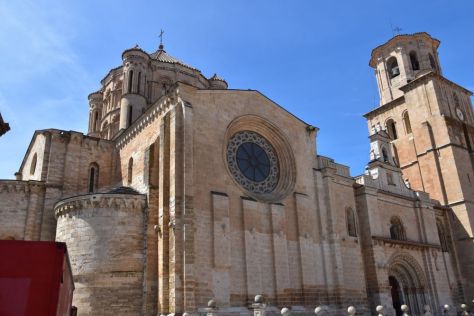 This is the western portal. 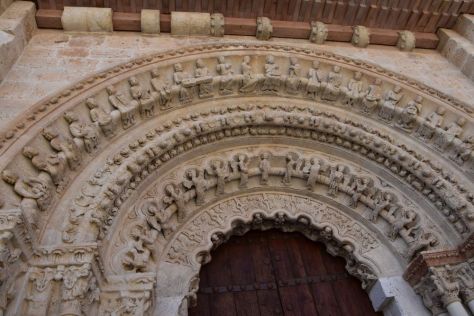 A service is going on inside. We listen for some time.

Then we stroll through the streets with their half timbered houses.

The San Lorenzo church has been built in Romanesque style.

Inside we find the Mudejár elements such as the ceiling and balcony. Mudejárs are Muslims living under post-islamic Christian rule, their architecture influenced by the Moorish taste is called “Mudejár”. 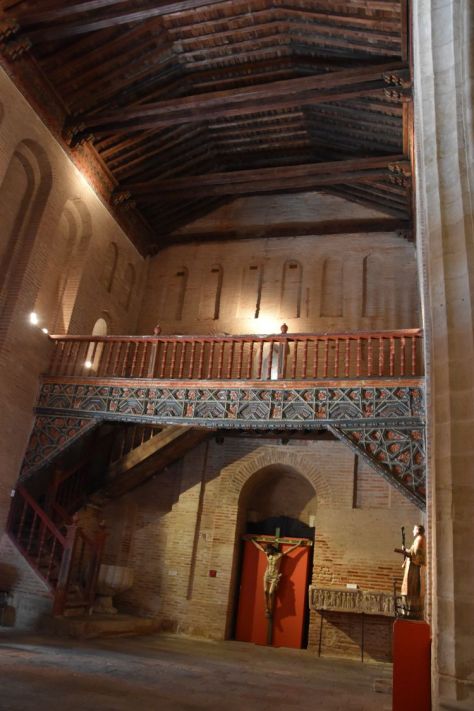 In a niche, we find this gothic altar. It tells the story of San Lorenzo.

D.O. Toro is a wine region that is becoming renowned. Merchants offer their regional wine in the streets.

On our way back to Zamora we stop in one of the vineyards. The ground looks sandy here. 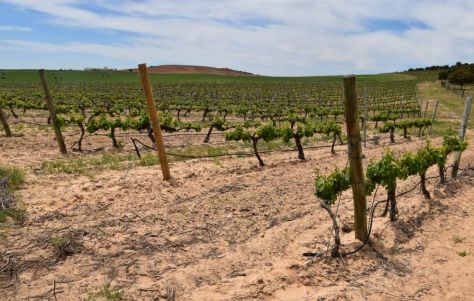 We enjoy dinner in the posh Parador. Tomorrow we will continue our way going east to Santo Domingo de Silos.