In September/October 2019, we were in Uzbekistan. On the  tour we explored the landscape which is mainly desert and half desert: We saw the Chimgan mountains, touched the Kyzylkum desert, stopped near the Aydarkul Lake  and stayed at Sentyob in the Nuratau mountains.

As it was autumn, the landscape was dry and dusty. To see flowers, we are told, we should rather return in spring.

North east of Tashkent is a small strip of Uzbekistan that reaches into Kazakhstan and Kyrgyzstan. We spend two days here doing a bit of walking in the dry and rough landscape.

In winter, Beldersoy is a skiing resort. The Beldersoy chairlift is currently being renovated.

There is a second chairlift that we take up, with many more Uzbeks. At the top, some wait to take photos of those who want a souvenir.

It must be an old Russian “light-weight” chairlift. At the top, there is a small edge to walk on, and it is not allowed to move off it. “Strictly forbidden to cross the border of the path”  or “за предел строго запрещено”. STOP!

The view is beautiful, to the west and down into the valley in the direction of Tashkent…

… with the sandy hills dotted with some green trees…

… and to the east to the mountains of Kyrgyzstan that have been covered with snow during last night.

The mountains in Kyrgyzstan are higher and perhaps more spectacular, but we loved our small metallic green chairlift.

The Yurt camp in the Kyzylkum desert

From Bukhara, our driver Firouz takes us to the red sand desert Kyzylkum where we stay overnight in the yurt camp Sputnik Navoi. (I am later told that “Firouz” is Persian and means “the victorious” or “the intelligent”).

It seems that in this area, the Uzbeks no longer live in yurts, but they want to give their tourists an interesting experience of the Central Asian way of life. In the evening we sat at the camp fire singing songs with other tourists from France, from Germany, from England… not really an authentic Uzbek experience, but nevertheless it was fun.

The desert has its charm and really looks somewhat reddish, covered with scrubs. I enjoy the atmosphere…

… and a small ride on the camel Bumba. I stroke its neck, while it carried me through the desert.

The Ayarkul Lake emerged accidentally, when after a heavy rainfall the Chardarya irrigation dam in Kazakhstan had to be opened which resulted in the Arnasay basin in Uzbekistan to be filled with water. The lake adds to the scarce water supply of Uzbekistan. We eat excellent fish from the lake in this “restaurant” – I remember that the fish was called Wobla. 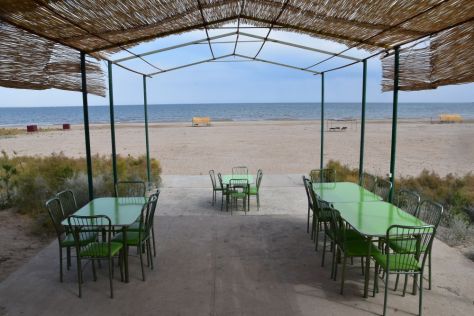 … meeting a herd of Karakul sheep, a race that originates from Central Asia and is used to produce Persian fur. As I learn, the fur is made from newly born lamb – a scary idea for me.

There are some hills in the background. 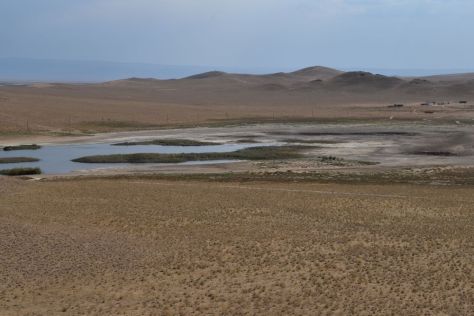 We continue our way to Sentyob in the Nuratau mountains.

Uzbek hospitality in the Nuratau mountains and at the village Sentyob

Sentyob is a village in the Nuratau mountains, located on 600-700m above sea level.

Sobek picks us up near the main road and takes us to his shady guesthouse Manzaralari; he has just finished building his guesthouse in summer 2019. 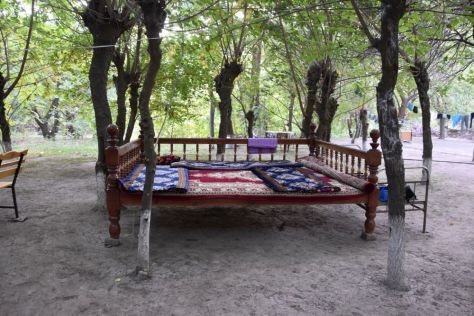 We sit in the shade on this sofa and we enjoy delicious meals under the trees near the creek. 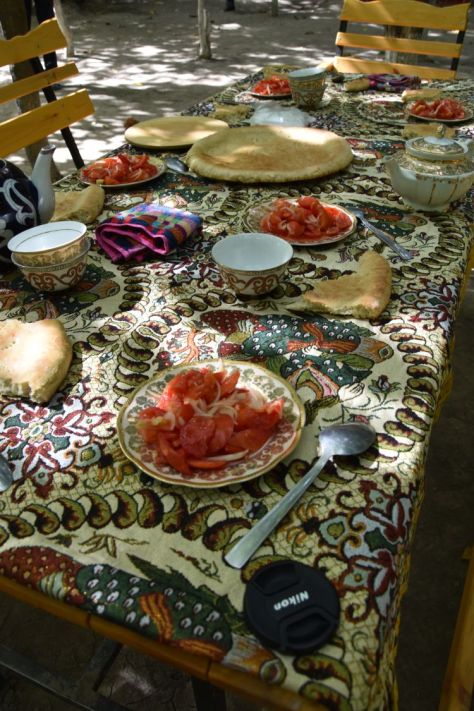 Once they serve a delicious Plov which is the national dish of Usbekistan: Rice, meat, carrots, onions and dried fruit.

The village Sentyob stretches along the creek originating in the mountains.

At the end of the village is the mosque. Today the people from the village celebrate the circumcision of three boys (we are told that the cirumcision took place in the hospital).

We are invited to have lunch (hotpot with meat, potato and vegetables) and to drink vodka. We join the community dancing. 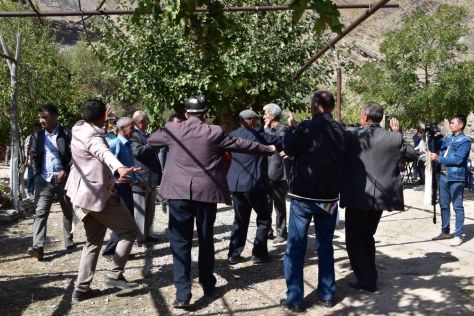 Then we continue our way into the valley… 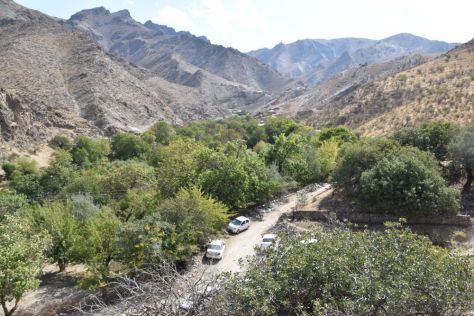 … climbing up to a deserted village…

… with some hens (one house between the ruins is inhabited).

We come across some petroglyphs with Farsi text.

Along the creek we see cows…, 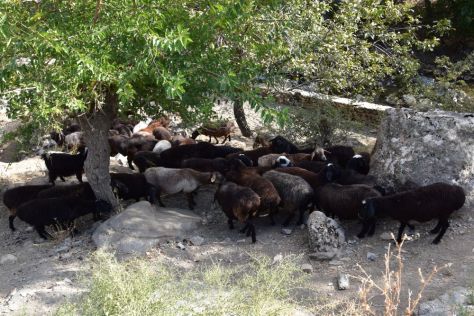 Behind the valley barrier is a lake, but that is now to far – some 10 km more going there and another 15km to return back to Sentyob.

We watch some sheep climbing up the rocks…

… and get back to our comfortable guest house.

The next day we walk along this lush creek…

… up to this huge platycladus (arbor vitae) that is said to have been planted by soldiers of the army of Alexander the Great. May be that the age of the tree is exaggerated, but surely it IS old. 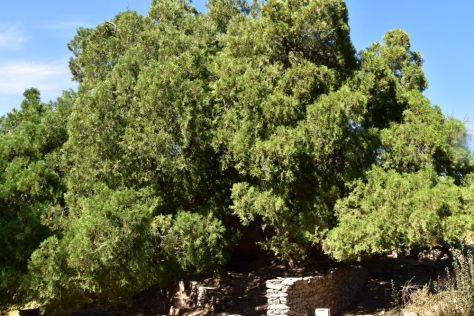 The girth of the trunk measures 24m, as a plate explains.

A tree planted by Alexander the Great? In 300 B.C.? Has Alexander really been that far in Central Asia? Yes, he was here where he found his wife – let us explore the history of Uzbekistan as part of Central Asia. It has been invaded by various peoples from the west and from the east to become this mix of ethnics that it is today.