In March/April/Mai 2020, the virus has stopped me travelling. Instead I listen to the stories that my home tells me.

This small Kazak carpet is a souvenir of my dad. He bought it, when being in the Caucasus region as a meteorologist in the 1940’s. 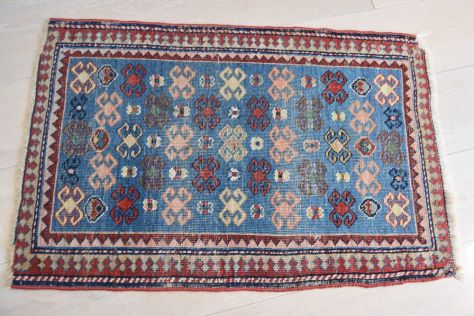 I love this small carpet. It is a symbol for the good memories I have of my father that we called “Vati”. He died much too early, on Saturday, 14th of March 1970. This was my last school day, just 50 years before the Corona virus lockdown was announced in Switzerland in 2020. What a breath taking coincidence that I felt intensely.

In addition to the carpet, I have some books of my father, one of them being “Philosophie am Steuer: Ein europäisches Reisbeuch” by Eugen Diesel (Reclam Verlag Stuttgart 1952; “Philosophy at the Steering Wheel: A European Travelling Book”). 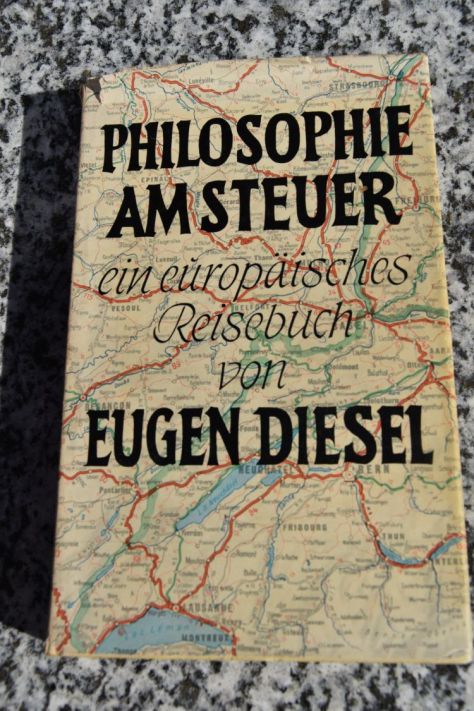 I have kept this book for the signature of my dad. So far, the book has waited in my bookshelf. 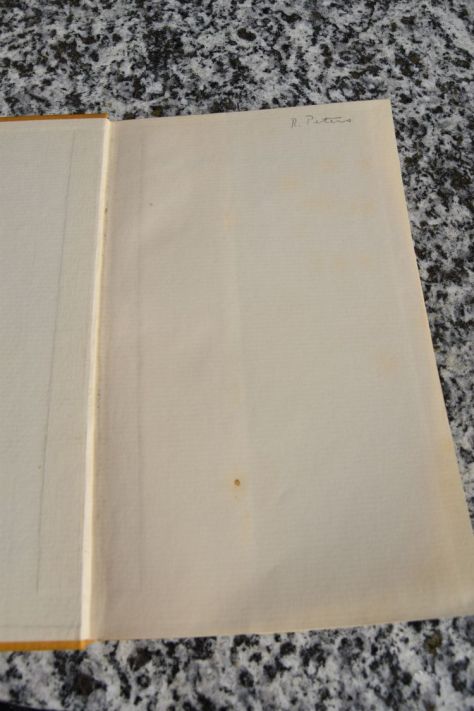 Now, being confined at home, I took it out and read it. This was a fascinating experience for me.

Let us see who Eugen Diesel was, let us travel with him to places in France that I have been to later and hence have memories that I like to revive, while being at home.

Who was Eugen Diesel?

Eugen Diesel  (1889-1970) was the son of Rudolf Diesel who invented the Diesel engine in 1892. In the early 20th century, the Diesel engine replaced steam engines (such as for trains or ships), while passenger cars used gasoline only. With his father, Eugen travelled through Europe in 1905, in a red NAG car (p. 13, NAG = Nationale Auto Gesellschaft, 20-24 PS).

Instead of becoming an engineer, Eugen Diesel decided to become a writer. Eugen learnt French culture from his father Rudolf, who was bilingual French-German, as he had grown up in France until the age of twelve, when, in 1870/71, the war between France and Prussia/Germany forced the family to return to Germany.

In 1947, Bayern had no apples and Württemberg had no potatoes… Hoarders from Bayern took the trains to Württemberg to buy apples and hoarders from Württemberg went by train to buy potatoes in Bayern, though hoarding was forbidden. The trains were full and the people carried large baskets that added to the mess. Eugen wanted to get from Stuttgart to Munich – and he got stuck in the overloaded trains.

Hoarding must be in the human genes: We have seen empty toilet paper shelves for weeks during the corona lockdown of spring 2020.

To travel more freely, Eugen acquired his own car in 1950. It was a Mercedes Diesel. Mercedes had just started to build passenger cars that run on Diesel. 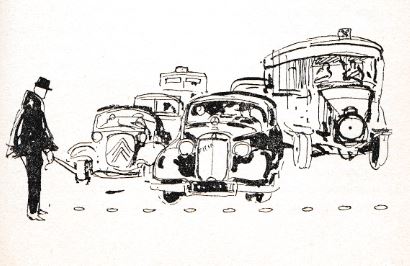 Eugen had not driven a car four eleven years. Nevertheless, he left the factory at the steering wheel of his new Mercedes. He started to drive through churning and distressed Europe and enjoyed to be mobile again: “A city, 100km away, is now again becoming a neighbour”, he said (p.19). His book “Philosophy at the Steering Wheel” tells about driving 45’000km in Europe, above all in France, in 1950/51.

First excursions by car in Germany

With his new car, Eugen Diesel started to explore the area around Munich. Among his destinations was the Romanic St. James church in Urschalling with gothic frescoes (now on my agenda, when travelling to Munich again) or the Bosch Factory in Memmingen and the Daimler-Benz Factory in Sindelfingen (he had inherited the interest for engineering from his father). Then he went beyond Bayern to cities such as Augsburg or Stuttgart. He observed the ruins and how German cities strived to recover. In Mainz he attended the inauguration of the reconstructed bridge crossing the Rhine. President Heuss made a speech without mentioning the engineers, as Eugen, being the son of an engineer, noticed frowning. He visited friends again that he had been separated from for years. (I can understand the enjoyment – now, in June, I started to see more friends again, as the lockdown is opening up).

Inside Germany, Eugen encountered a new border. Signposts are pointing to Magdeburg or Halle, but these cities had become out of reach for him, as bars blocked the roads to the new Russian eastern zone of Germany and the bridges were closed. Eugen stood at the closed border for two hours and gazed on to the other side; he could not see anyone. 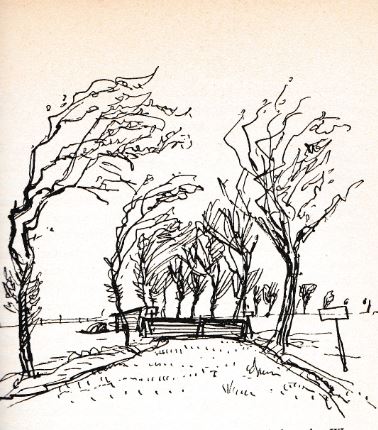 The walls built later will separate West and East Germany for 40 years, until 1989.

From March to June 2020, 70 years later, borders in Europe are closed again – for the pandemic. The Sundgau in France is out of reach for me now. I was sad, when seeing this bar on one of my bicycle rides. 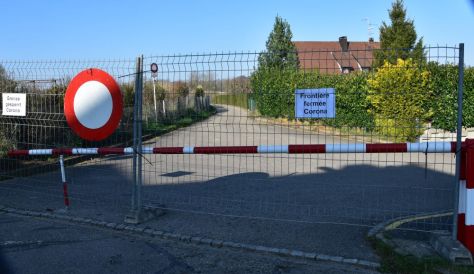 Eugen Diesel observed that the traffic in the 1950-ies was growing rapidly. Also my dad was of the opinion that there was too much traffic then. He never sat at the steering wheel of a car again after having returned from the prison camps in France in 1949, though he had driven cars since the 1930-ies – his parents had an Adler. However, compared to the traffic today, this highway does not look very crowded to me. 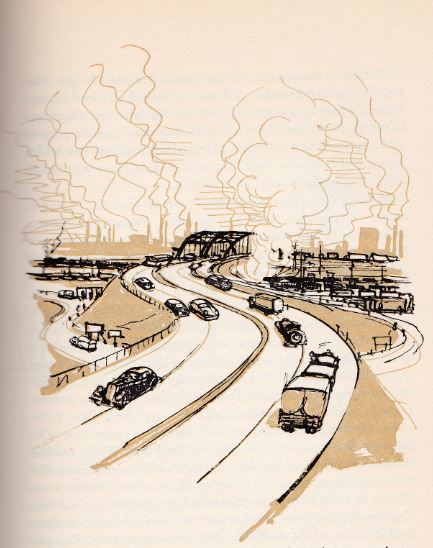 Eugen reflected that on highways, one accident could cause serious traffic jams, which would ask for more and more roads to connect more and more factories and cope with the rising traffic. Today’s traffic density, the network of roads, the sprawling of cities as well as pollution and climate change exceed Eugen’s fears, I believe.

In 1938, Eugen Diesel had connected up with a French scientist and intended to visit him in France, but the war closed the borders. After the war, in 1950, Eugen decided to visit him with his wife, Anna Luise Gräfin von Waldersee. They planned a tour to Auch near Toulouse, where the former scientist now worked for the departmental government. Eugen went through much bureaucratic pain to be able to cross the border to France. 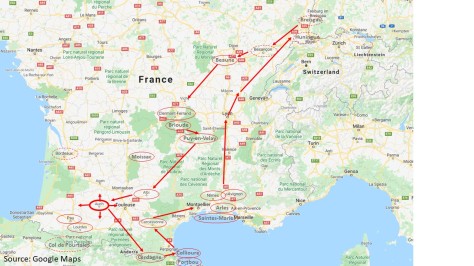 In September 1950, Eugen left Munich with his wife and drove to Altbreisach (still in Germany), where they saw the city in ruins. They crossed the river Rhine and immediately felt that they were in France: The atmosphere was different, somewhat more light-footed than in Germany. Yes, I admit that I also feel the different atmospheres between France and Germany, both bordering my home city Basel.

Eugen continued to Neuf-Brisach, Colmar, Belfort (with Bartholdi’s monumental lion) and Montbéliard (as Mömpelgard it had belonged to Württemberg from 1397-1793, he remembered). In Besançon they had their first lunch break in the restaurant Palais de la Bière (still exists today and looks enticing).

Burgundy was the next station. It was autumn and in Nuit-Saint-Georges north of Beaune, they saw many carts filled with Burgundy grapes. 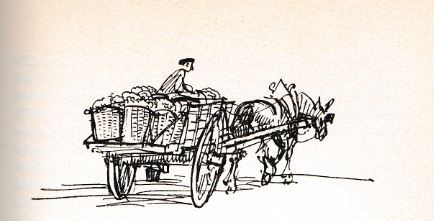 Well, such carts are now in museums such as in the museum Clos Vougeot that I visited in November 2014. 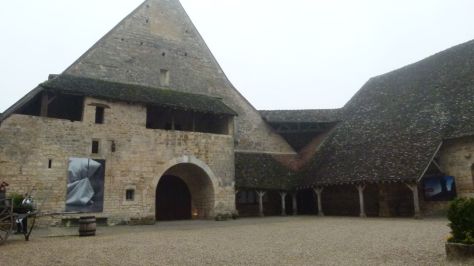 Autumn in Burgundy can be very misty, as my photo from 2014 shows (taken near Clos Vougeot). 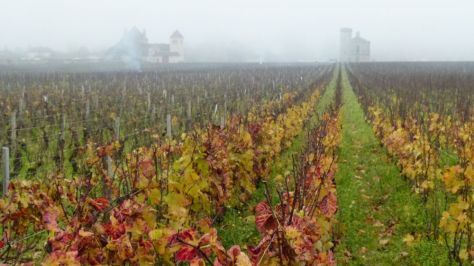 In Beaune, Eugen visited the Hôtel Dieu (Hospices de Beaune). At that time, it was still a hospital, as it had been for 500 years (since 1443). Except, the vaulted gothic room was no longer in use as a hospital in 1950. Eugen was impressed and so was I in 2014. Solemn atmosphere under the vaults… 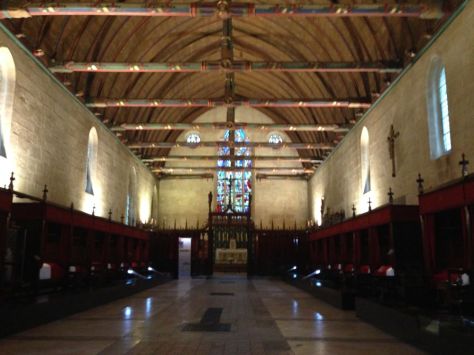 … with the beds along the wall, covered with red blankets. 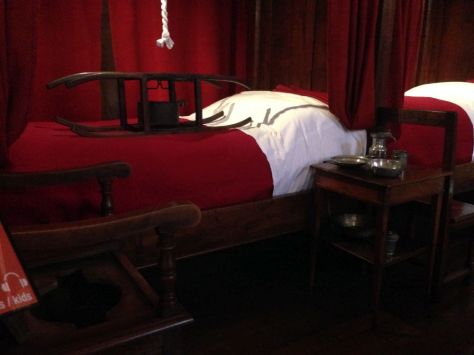 However in 2014, the Hôtel Dieu had stopped to be a hospital and had turned everything into a museum. In addition, the traditional wine auctions of November take place here. 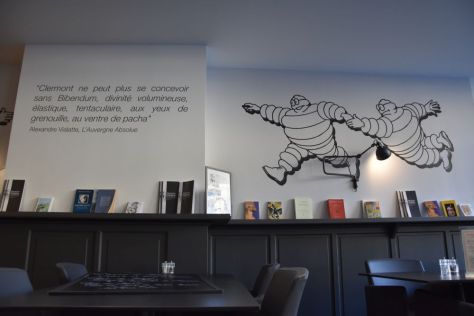 Eugen Diesel visited the old town of Clermont-Ferrand with the gothic cathedral (to the left). Then he drove up to the summit of the volcano Puy de Dome (in the background, 1465m). 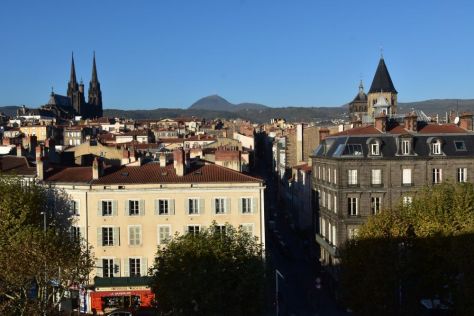 I drove up to the top of the Puy de Dome in the 1980’s, but when returning in 2017, I found the road to the top closed. Instead, there is cockwheel train to get to the summit.

A few kilometers south of Clermont-Ferrand, Eugen Diesel and his wife stopped at Brioude and stayed overnight in the Hotel de La Poste. Eugen described, how clean and well renovated the hotel was. The couple enjoyed an excellent meal in the cosy restaurant on the first floor. One waiter served all guests – diligently and carefully. He had fair hair, his name was Erwin Voigt and he was from Pomeriana, formerly part of Germany. It was him that had renovated the Hotel de la Poste at that time; it was owned by an elderly couple. 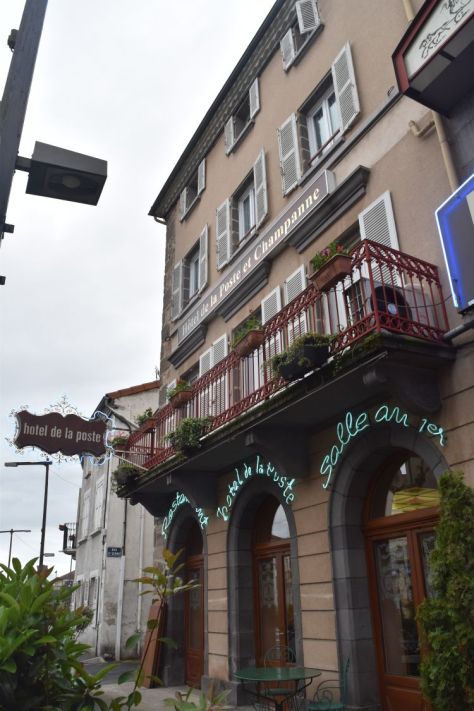 In 2016, I was in the same hotel, with my friend. It was one of the best and cosiest hotels we have ever been at in France. We had an excellent dinner (in the restaurant on the first floor) and we slept across the street, where the hotel had built modern new rooms, even accessible by wheel chair.

Eugen Diesel did not talk about the beautiful Romanic Baslica Saint-Julien in Brioude… perhaps it had not been renovated then and not mentioned in his Baedecker. 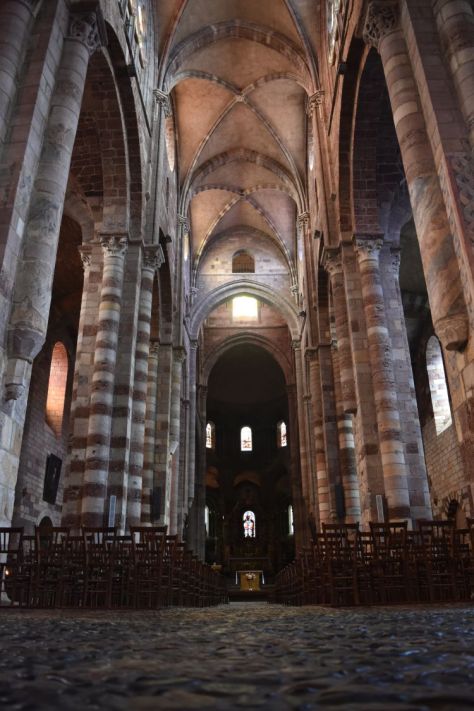 Eugen and his wife continued to Le Puy-en-Velay and were impressed by the needles topped by the church Saint Michel d’Aiguilhe and by the Madonna statue. 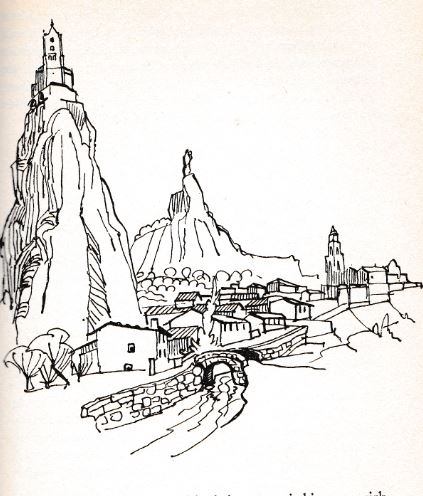 Perhaps the needles are a little inflated in the pen drawing. In 2016, we look back to Puy-en-Velay. The city has grown considerably since 1950. 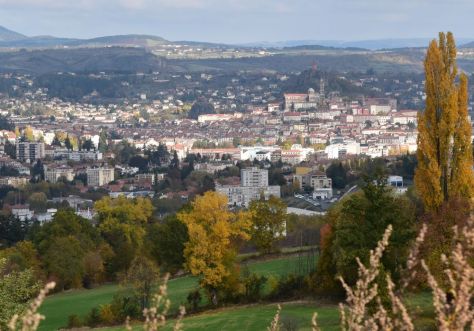 We stayed in Le Puy-en-Velay for one night to visit the romanic Annunciation Cathedral built with the typical black volcanic stones that characterize the whole city center. 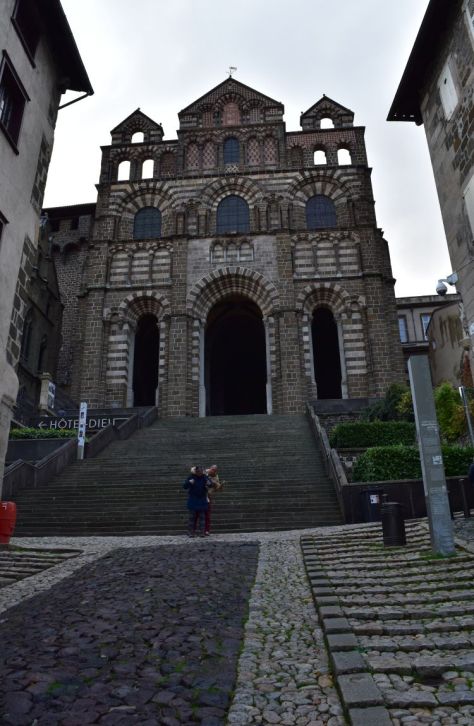 The small streets are inviting. This butcher’s window illustrates, what Eugen might have meant, when talking about the somewhat more light-footed atmosphere in France.

In Albi, Eugen and his wife admired the Cathedral Saint Cecilia with the red brick walls rising towards heaven. He thinks of the Albigenses or Cathars that were eradicated around 1200. We visited Albi in 2016 in the pouring rain… 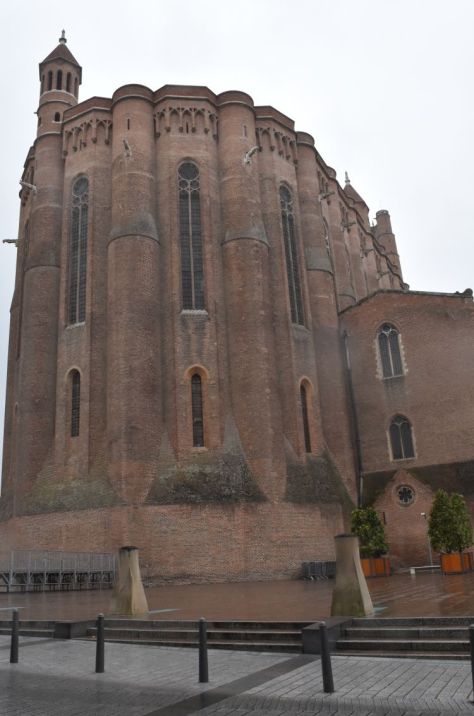 … and like Eugen, we entered the church, with the one single nave all painted in blue and with the choir separated by a finely carved rood screen (Lettner) made from stone. 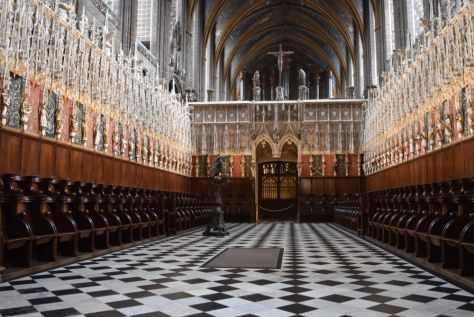 Via Toulouse, Eugen and his wife reach Auch, where they stay with their friend.

Let us travel with them around Auch and back to Germany in my next blog.

Source: Eugen Diesel, “Philopsophie am Steuer: Ein europäisches Reisbeuch”, Reclam Verlag Stuttgart 1952 and my own photos from travelling in France.