In August 2022, we explore Thuringia on our way from Berlin to Switzerland.

Now we visit Arnstadt, the charming city, where Johann Sebastian Bach had his first engagement at the age of 18 years.

On the market square, young Johann Sebastian Bach sits casually laid-back on a chair. Or what is it exactly he sits on?

He looks at the City Hall …

… in front of the Cloth Halls (Tuchgaden). The bronze sculpture was made by Bernd Göbel, in 1985.

During the services, Bach had to play the organ in “his” church, which was third in the hierarchy of the churches of Arnstadt. He used his free time for intense studies, which laid the foundation for his career as the outstanding composer we remember him today. Then, he was young and a bit tumultuous. He called the ungifted pupil Geyersbach “Zippel-Fagottist”(Geyersbach was a not the most talented bassoonist) and he invited “eine frembde Jungfer” (an unknown maiden) on to the organ gallery. Repeatedly, the consistory admonished him. They reproached to him that he extended his vacation staying at Lübeck beyond the four weeks allowed. As a matter of fact, Bach stayed longer to listen to organ player Buxtehude during Christmas time and to learn from him.

At one time, the Bonifatius Church stood here. It had burnt down in 1581 and the ruins remained for a hundred years. They were pulled down and the New Church was built in 1676. The stones of the Bonifatius Church were reused. Now, I understand, why, from outside, the New Church makes an “old” and non-Baroque impression on me. The inside decoration was upgraded and painted in 1776; the colours of then were restored in the year 2000. I like the joyful and friendly yellowish atmosphere.

For Bach’s 250th birthday, in 1935, the New Church was renamed to Johann Sebastian Bach Church. My friend buys all CDs of Bach organ concerts available.

Most houses of Arnstadt were built after the city fire of 1581 – in Renaissance and Baroque style. The city was ruled by the dukes of Schwarzburg, until 1918. They introduced reformation in the beginning of the 16th century.

The Internet has a list of the historical houses of Arnstadt. Let us look at some of them.

Some historical reminiscenses at the Markt (Market Square) 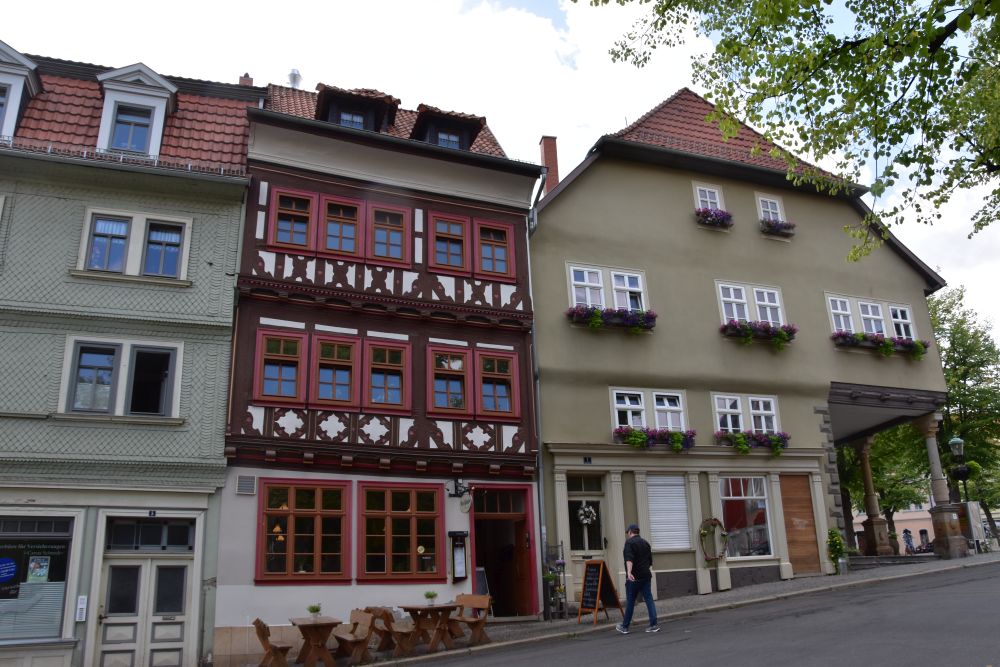 … we reach the Markt (market square) with the Town Hall that shows Dutch influence (1583).

On both sides of the clock under the gable, we can discern two figures, Maria and Bonifatius, probably saved from the Bonifatius Church, after it had burnt down in 1581.

The Cloth Halls dominate the eastern side of the Market Square. 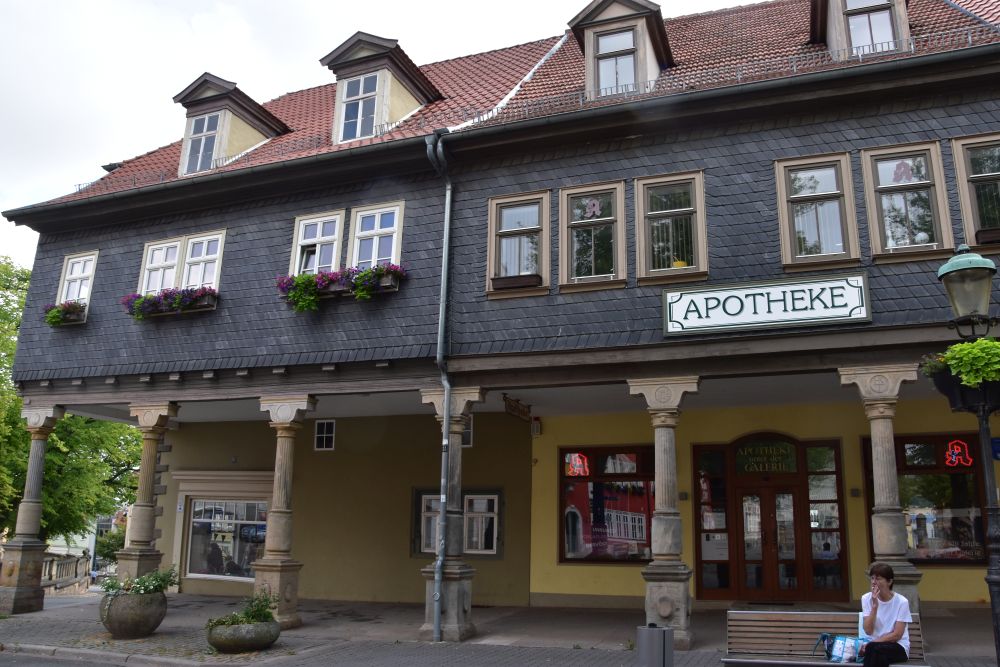 Arnstadt – like Erfurt – flourished due to trade and blue dyestuff obtained from the woad plant (Waid in German).

One of the former Cloth Halls is the Café Marlitt. Born at Arnstadt in 1825, Eugenie John published best sellers under her pseudonym Marlitt, the most famous of which is called “Goldelse” (translated to English as “Gold Elsy”).

The house “Zum Güldenen Greif” (Golden Gryphon) is another historical reminiscence on the Market Square.

More history on the Riedplatz

On the Riedplatz, the Hotel Goldene Sonne (Golden Sun) tells us on the blue plaquette that it was a frequent meeting point for members of the Bach family in the 18th century. The hotel (nicely spelled the French way, “hôtel”) was first mentioned in 1497. 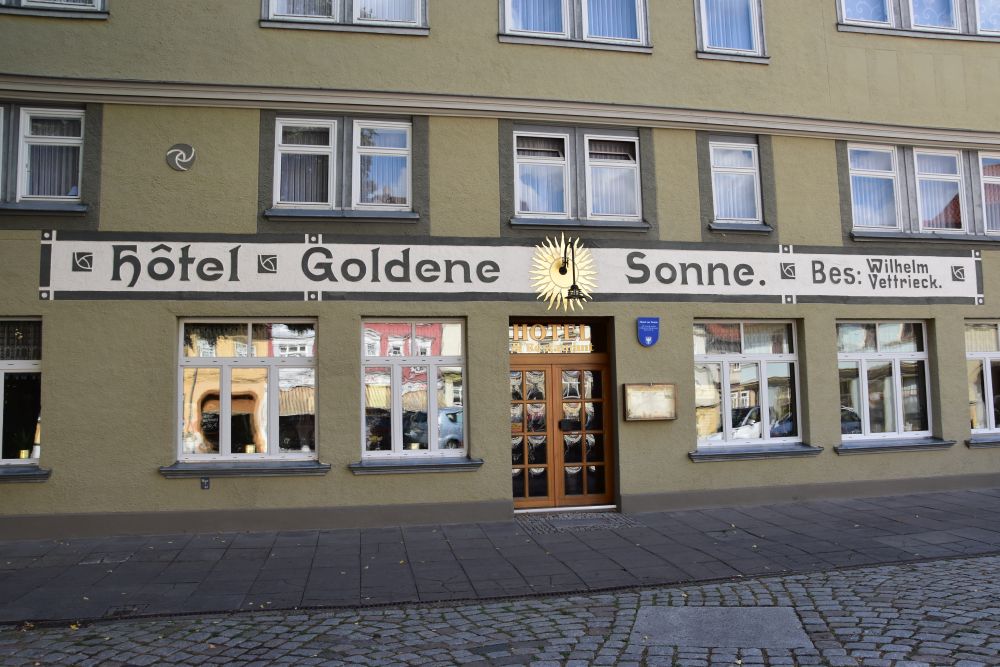 Nearby, Christopherus decorates the wall of the house “Zum Grossen Christophorus” (1574). 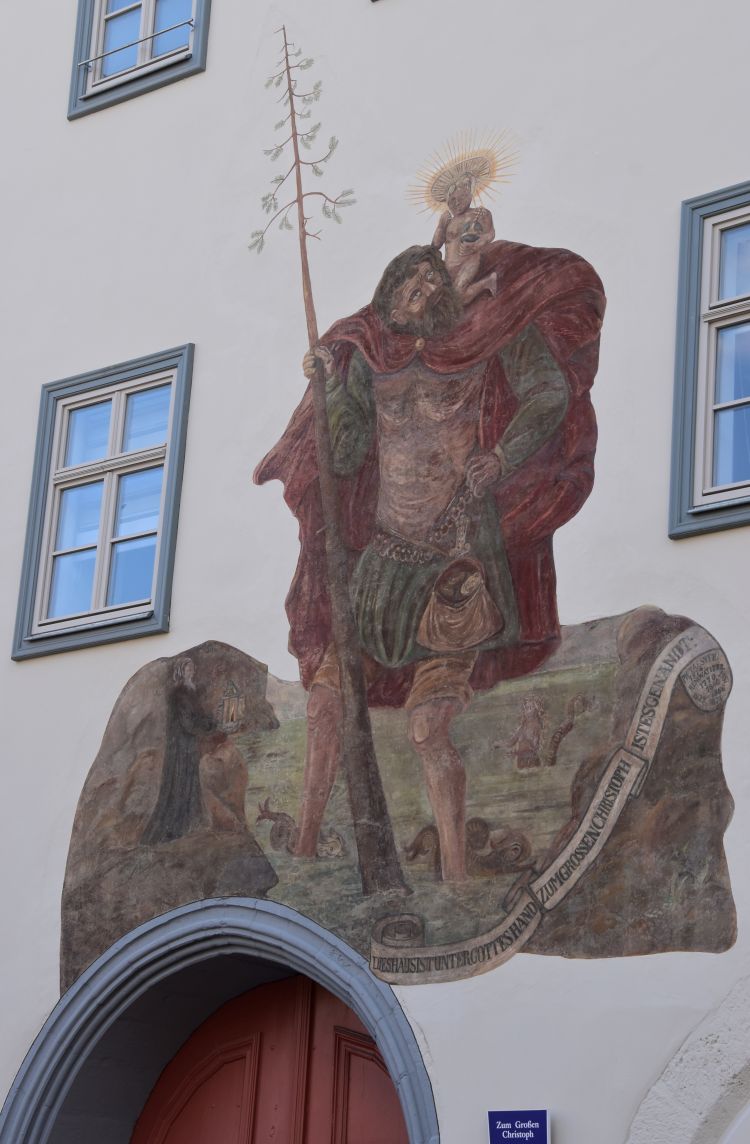 At the half-timbered house called Zum Hut (the Hat), we have a coffee, with the view of the Marktstrasse. 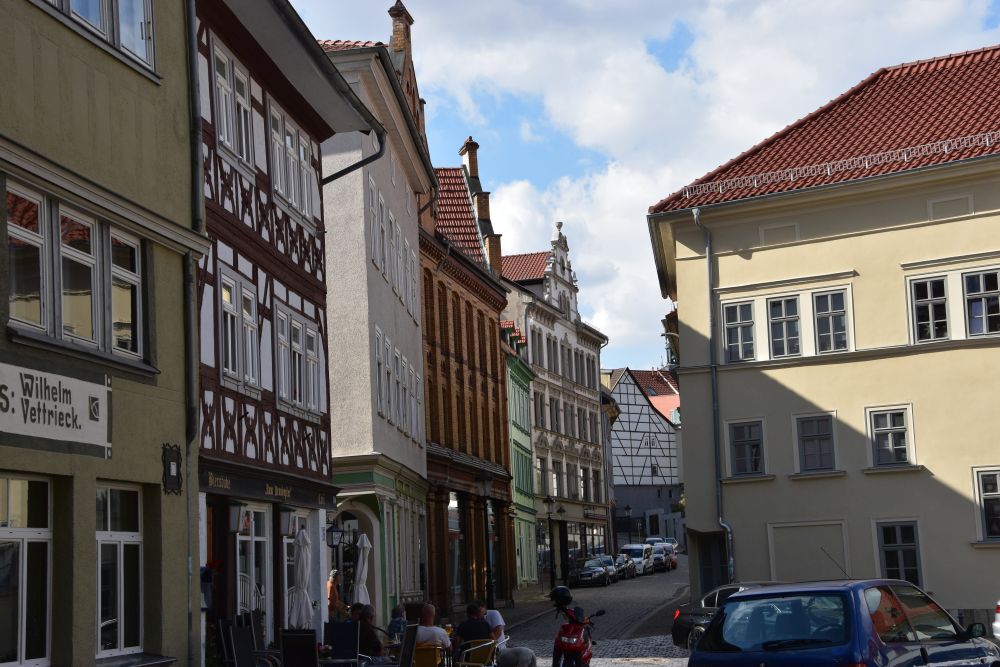 The Riedplatz ends with the Riedtor, the city gate. To the left is the Gothic Jacob’s Tower; it remained from a former church.

Parts of the southern city wall have been preserved, … 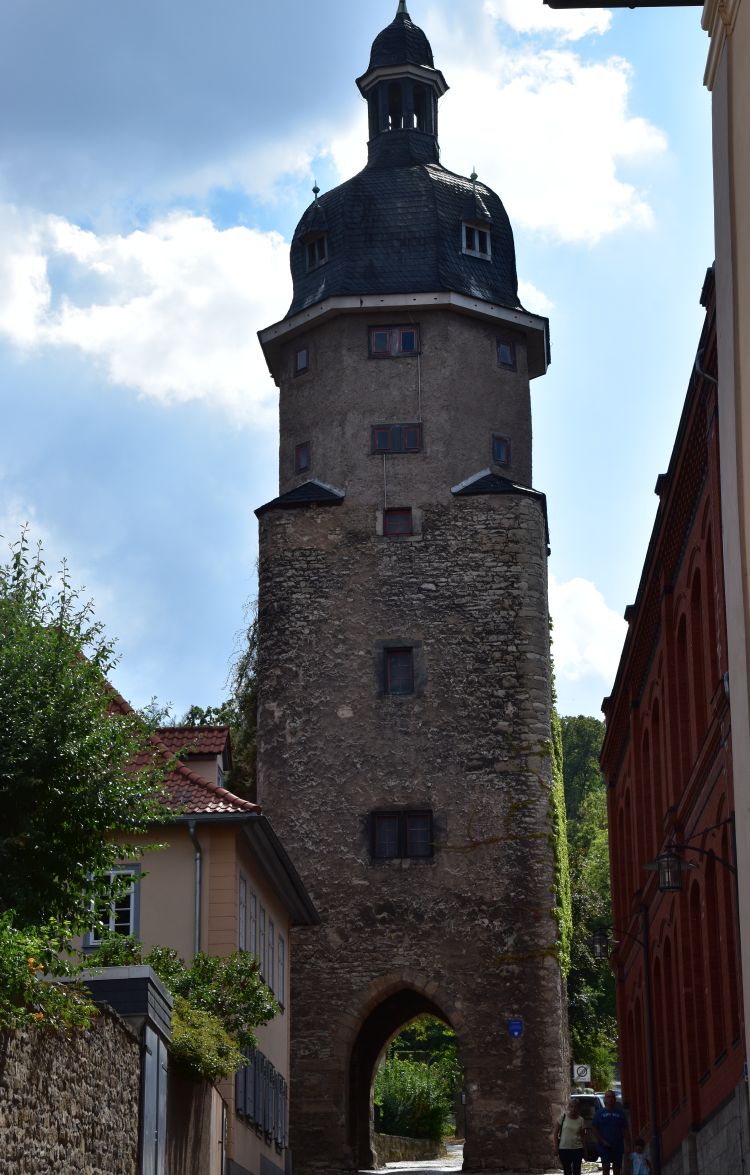 In the Indian restaurant Ganesha, we have our lunch break with a delicious Tandoori meal

At lunch time, we visit the Ganesha restaurant, what a surprise! In the middle of Thuringia, we find a delicious Tandoori meal, prepared with great care by immigrants from India that receive their guests with friendly enthusiasm.

The Liebfrauenkirche was built between the 11th and 13th century. The first belfry has been started in Romanic style and completed in Gothic style. The half-timbered house is the old paper mill.

The second belfry in the background is Romanic from bottom to top. 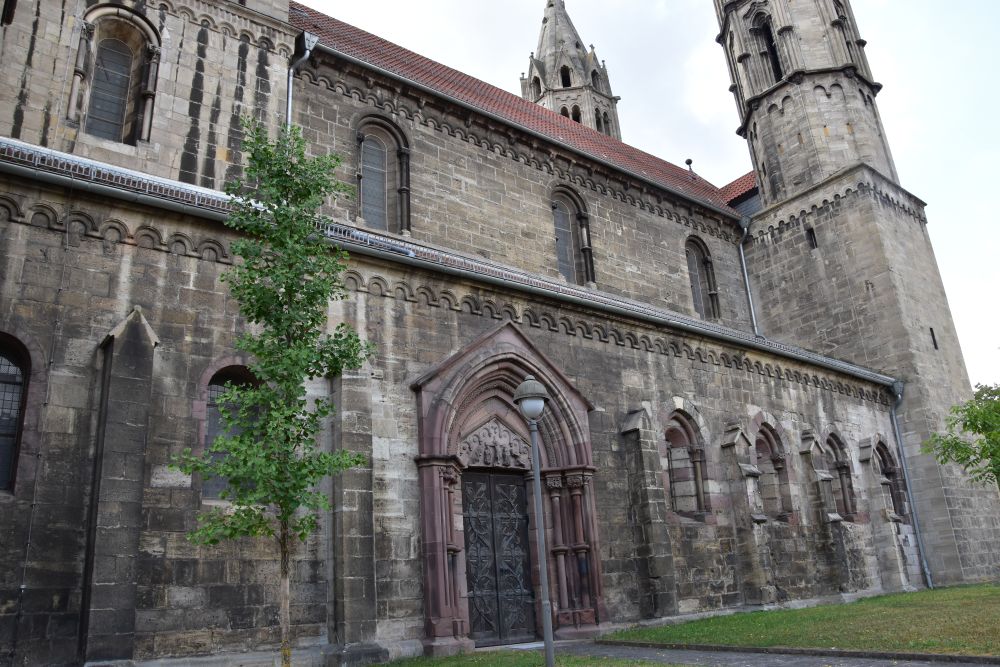 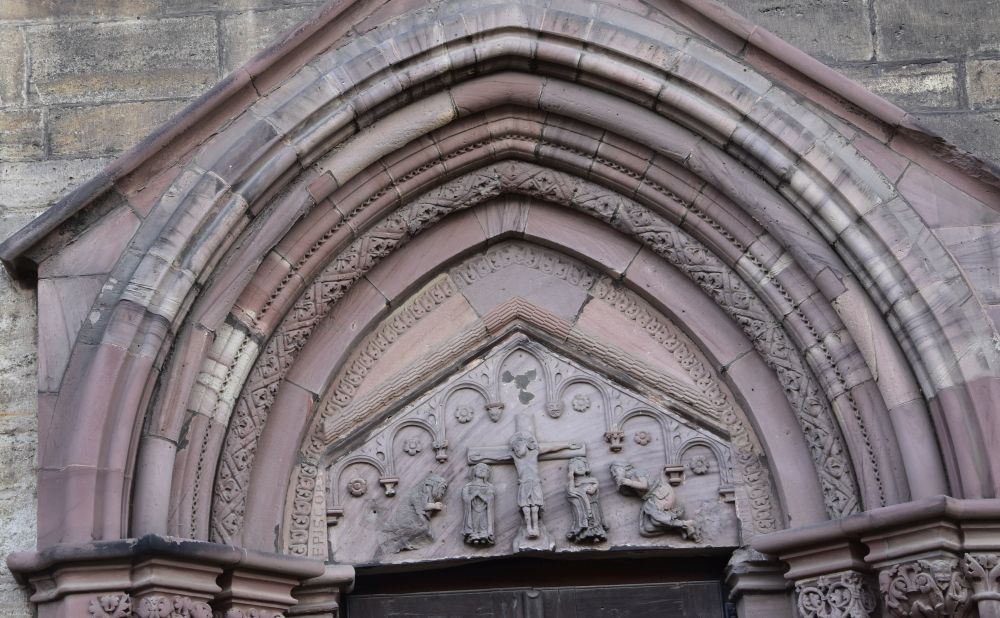 While the nave is mostly Romanic, the choir was rebuilt in the late 13th century in Gothic style.

Inside are some treasures from the 15th century, such as the Gothic altar (1498) with the coronation of Maria and the saints Laurentius and Bonifatius.

It is a winged altar which opens like a book to present scenes from the Passion of Christ. Interesting: The Last Supper takes place around a round table, as I found it at Berat in Albania.

The altar was taken from the Oberkirche that was decaying in the 19th century.

Other treasures are the baldachin of the baptismal font (16th century), the painted iron door (1340) and …

… the beautiful Madonna of Arnstadt made from lime wood (1415).

The pulpit is carried by Moses holding the commandment tablets, a set up that I have never seen before (Renaissance, 1589).

The Oberkirche (Upper Church) was built as part of the Franciscan monastery in 1246 and finished in the late 14th century (Gothic). After the reformation, in 1538, the monks left the monastery. The church was used as a protestant church. It was renovated again and again up to 1760. After that, it started to decay. In 1977, the church had to be closed; it was in such a bad state. After 1990, the church was repaired step by step and in September 2020, it was reconsecrated (Krötzner,p. 47). It has been in use again for two years now.

I cannot believe that services in this beautiful church have restarted only two years ago. The painted Renaissance galleries (completed by 1600 (Kratzer, p. 28)) make a wonderful, solemn atmosphere.

Furthermore, I expect the dukes Schwarzberg-Arnstadt and their court to appear in their premier seat at any minute (Kratzer, p. 32). 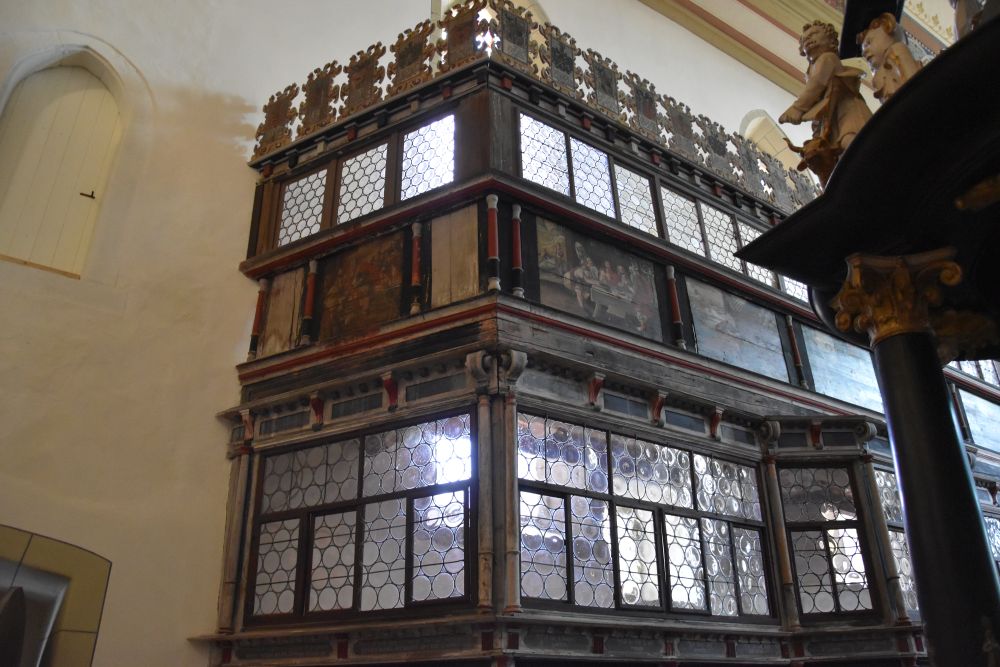 Well, the church is closing. After having caught just a glance, we have to leave the church.

We confort ourselved by looking at the Hotel Zum Stadthof, another beautiful half-timbered house.  It is just across the Upper Church.

Round off – strolling through the Schlosspark

Arnstadt was the residential city of the dukes of Schwarzburg-Arnstadt until 1716.

We stroll through the Schlosspark (castle park) that seems to have dried out this summer.

The dukes of Schwarzburg resided in the Castle Neideck, now in ruins (except for the tower) …

… and in the New Palais, famous for the porcelain cabinet “Mon Plaisir”.

Here we see the roof of the New Palais and, in the background, the tower of the Castle Neideck.

Overview map of our tour in Thuringia

We have a coffee at the Riedplatz of Arnstadt. Arnstadt, the city of young Bach and with the medieval city centre and the churches was well worth a visit!

We return “home” to Eyba to spend our last evening in the castle courtyard.

Tomorrow, we will drive to Eisenach. We have reserved a room at the Hotel “Haus Hainstein”. 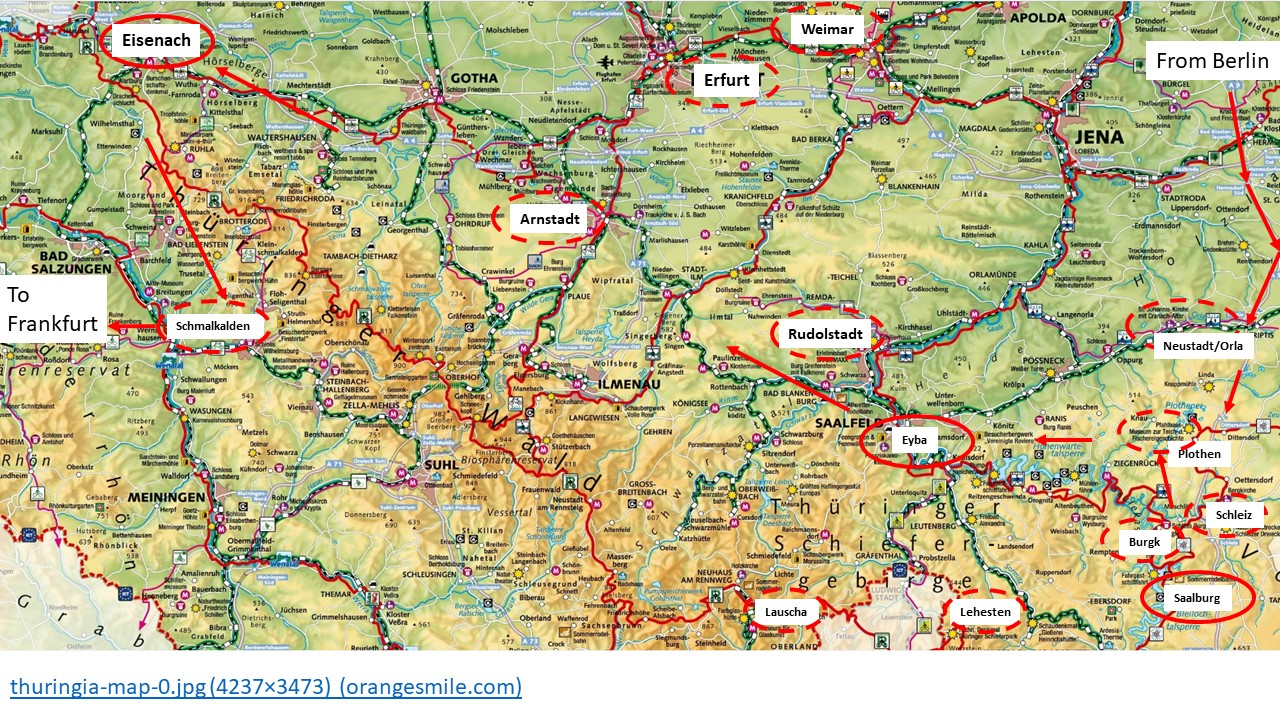