Do you know the marvellous church of Saint Mary at Pontresina?

The church of Saint Mary is located at the highest point of the village. A steep path leads uphill. 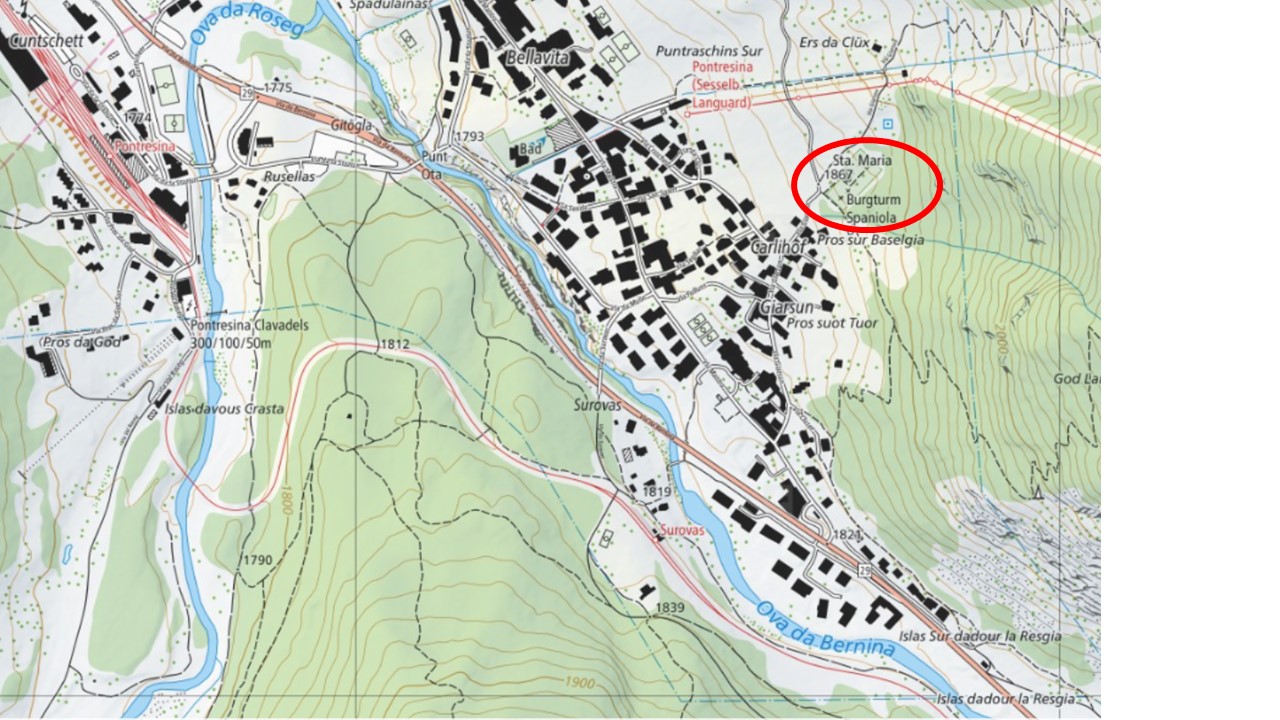 Approaching the church of Saint Mary

After having climbed up the steep path, the church of Saint Mary welcomes me with the gate open. 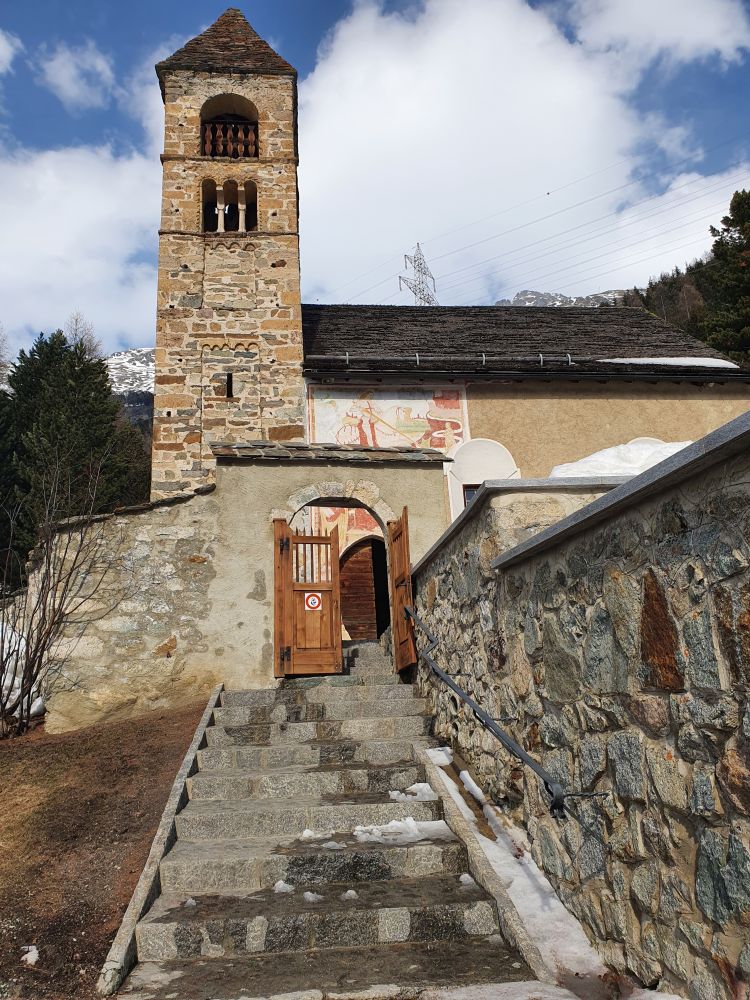 I look at the the belfry. The first three storeys are from the late 12th century. The two niches are decorated with blind arcades, reflecting the Lombardian style that started to spread over Europe around 1000. On the third floor, the windows with the round arches are divided by two columns. The top fourth floor and the roof have been added in the 19th century.

Looking back through the gate opens up a great view of the village Pontresina with the Roseg in the background. Dogs are not allowed here.

Above the entry door, the first frescoes show Saint George killing the dragon to free the princess and, below, Maria breastfeeding Jesus, whereby Petrus and a bishop are watching the scene. These frescoes are from 1495 (Bamert, p. 23).

The early frescoes from 1230 remind me of early Christian churches

On the back (west) wall, three frescoes from 1230 have been preserved.

This is Epiphany or the Three Kings visiting Jesus. Maria sits on the right hand side (her head has been destroyed) with Jesus blessing the kings. The oldest king (with a beard) is kneeling in front of Maria with Jesus. His crown reminds me of the Monomakh crown of the Russian Tsar (the Byzantine heritage on display in the Kremlin of Moscow). The other two kings are standing, whereby the middle king points to the Star of Bethlehem. The third king is the youngest of the three.

The middle painting shows the baptism of Jesus. He stands in the river Jordan (symbolized by an old man at the bottom between Saint John and Jesus). John the Baptist touches the head of Jesus. He wears his fur coat, painted with much care, and two angels keep the plaid cloth of Jesus.

The scene reminds me of the mosaic in the Arian Baptistery at Ravenna. Also here, Jesus stands in the river Jordan. The river is personified by an old man (to the left of Jesus). John wearing his fur coat and carrying a walking stick, christens Jesus by rubbing his head (probably with ointment, as I now understand from Bamert, p. 11). Christ is a young man, like in Saint Mary church. 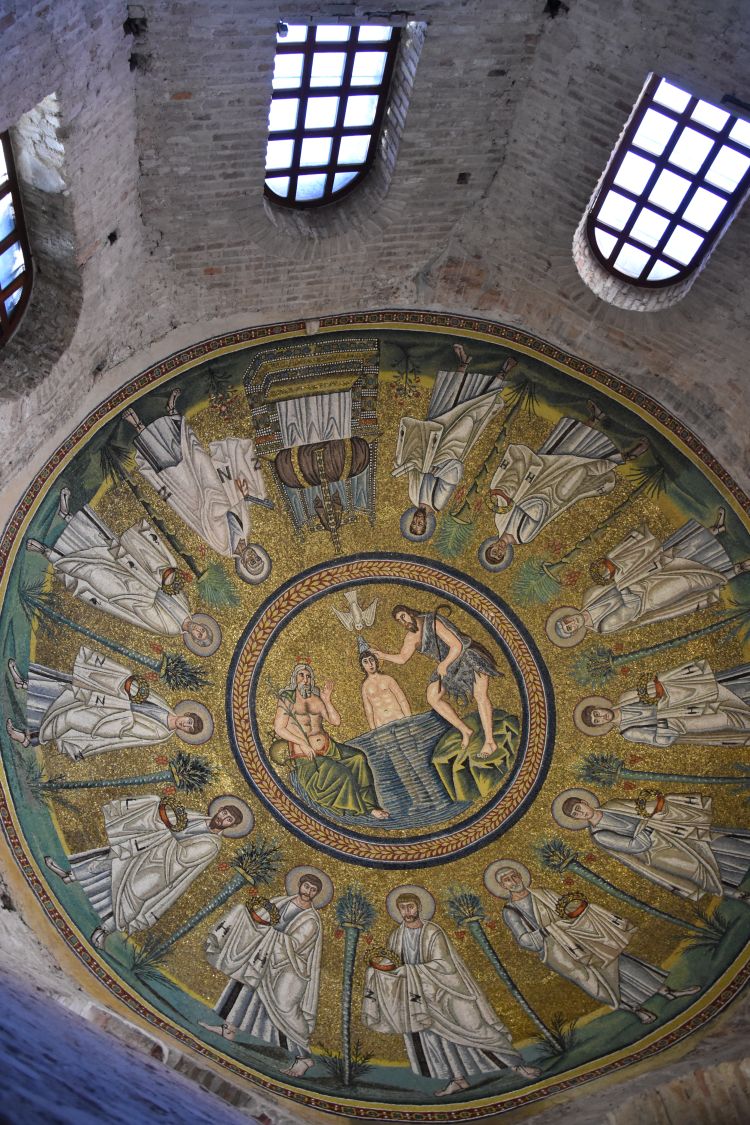 This is the same scene in the Orthodox (Neonian) Baptistery at Ravenna, whereby it is assumed that the scene, otherwise preserved in the original, has partially been altered later by giving John the cross and the silver vessel. Christ has a beard which makes him look older.

The baptisteries of Ravenna are from around 500 and the fresco at Pontresina, painted in 1200, is so similar.

After having been amplified, the whole church is repainted by new frescoes in 1495.

The choir is dominated by Christ in the Mandorla, around him the symbols of the Evangelists. Above the entry to the choir we can see the Annunciation scene, with archangel Gabriel to the left and Maria to the right. Above Maria, Godfather shows Jesus to her that will be born soon.

To the sides of Christ are the four fathers of the church; Ambrosius and Augustinus have been well preserved.

The apostles decorate the bottom of the choir. 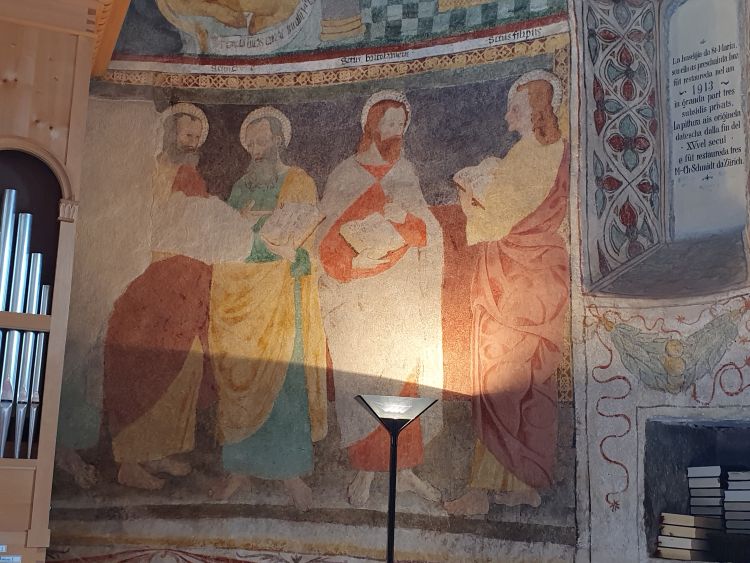 On the western wall the bottom row and the fresco between the windows belong to the Last Judgment, where Christ separates the good from the evil. The top row and..

… the frescoes above the entry door illustrate scenes from the life of Christ. I can see the Joseph and Maria with the donkey on their way to Bethlehem, Jesus at the age of 12 being presented in the temple, right above the door the empty grave with the three women and Pentecost.

The eastern wall tells the life of Christ and…

… at the bottom, the story of Maria-Magdalena (frescoes transferred from the western wall to uncover the frescoes from 1230).

The western wall “wraps around” the belfry that can be accessed through a tiny Romanesque door. Here the top row shows more scenes of the life of Christ and below is the story of Maria Magdalena (except where the frescoes from 1230 have been uncovered by removing Maria Magdalena).

The story of Maria Magdalena is told in 18 frescoes, the order of which has been changed by transferring some of the frescoes. It is a legend written down in the 13th century (Bamert, p. 18). Maria Magdalena is pushed on to the open sea in a rudderless vessel (above, left). She lands and preaches to a noble couple in Marseille (above, right), and she prays for them to have children. While the couple makes a pilgrimage to Rome, the child is born on the boat in stormy weather. Mother and child perish. The husband deposits them on a rocky island, continues his way to Rome, meets Petrus there that tells him, he will find his wife and child alive again, when returning. And so it was. The noble family returns to Marseille. Maria Magdalena is buried and causes more wonders after her death.

The decoration in the church of Saint Mary

The wonderfully decorated wooded ceiling from 1497 topped the amplification of the church. 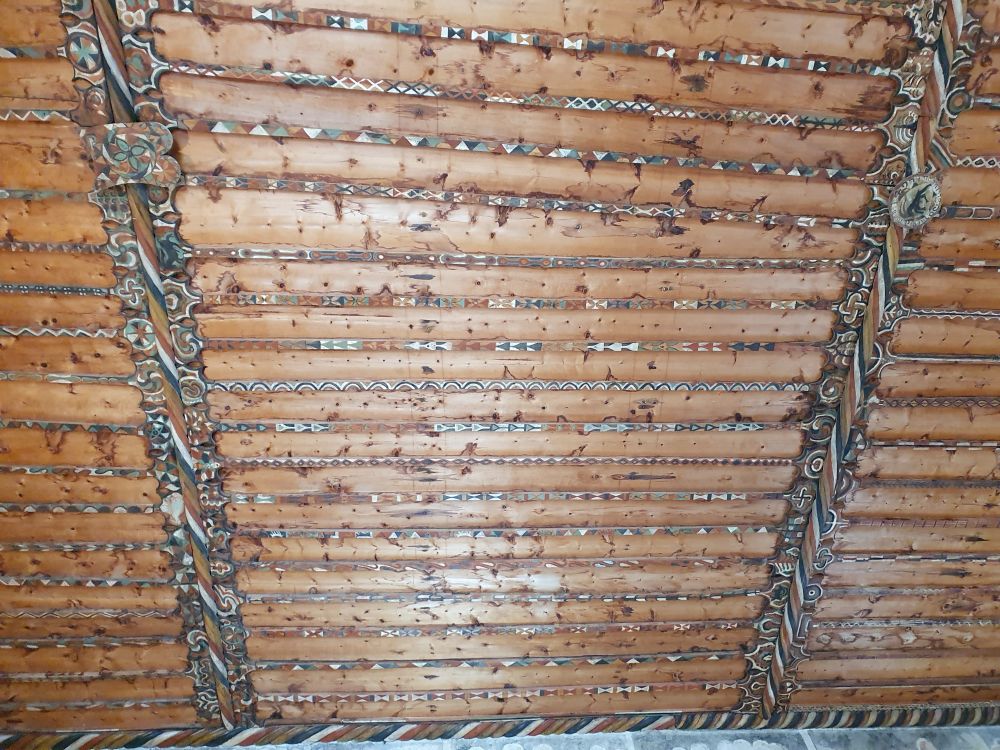 The marquetry of the table in the choir alludes to its purpose, the Communion. The lady in the centre holds a cup in one hand and an altar bread in the other. The table is from the late 17th century, and the inscription in southern Romansh indicates that it must come from the southern valley Münstertal.

The beautiful pulpit made from Swiss pine wood reminds me that I am in the mountains.

Around the church of Saint Mary with the cemetery

I leave the church of Saint Mary – it is chilly inside and I feel cold. For a while I sit on the sun on the bench.

Then I stroll through the cemetery and look back to the Roseg mountain.

The gravestones are half-buried under the snow – an enchanting atmosphere.

Some of the tombstones reflect the wealth of the villagers.

The defensive Spaniola tower near the church of Saint Mary

To round off my visit of the church of Saint Mary, I walk over to the near Spaniola tower built in 1210.

Pontresina evolved, where two creeks, the Ova da Bernina and the Ova da Roseg meet. In the 12/13th century it was known as Ponte (bridge) Sarraceno. It is under debate, whether “Sarraceno” comes from the Sarracens or whether it was a family name. At any rate, in medieval times, Pontresina, strategically located on the way to the Bernina pass, was more important than St. Moritz.

I will soon return to Pontresina, as I love the area for alpine and cross country skiing as well as for hiking. And when I return, I will visit the church of Saint Mary again to look at the frescoes more in detail, perhaps (when this virus permits) on a guided visit.

4 thoughts on “More than skiing around Pontresina: The Church of Saint Mary”