A year ago, in May 2019, Pascal Janovjak gave me his book “le zoo de Rome” (1) with the following words: “Tu sais que les animaux sont la matière première des fables (you know that the animals are the basic material of fables).”

Let me tell you more about this beautiful novel that evoked memories of “my” zoos, that taught me much about the zoo of Rome integrated in the history of the XXth century and that made me enjoy the related fictional story lines.

Prologue: “Le zoo de Rome” evoked memories; it might evoke yours as well

“Le zoo de Rome” evoked memories of “my” zoos in Basel (Zolli) and in Karlsruhe (Stadtgarten). You may have such memories as well.

At kindergarten age, in the 1950’s, my grand-ma invited me to the Stadtgarten in Karslruhe, whereby I was very cautious, when being confronted with animals. 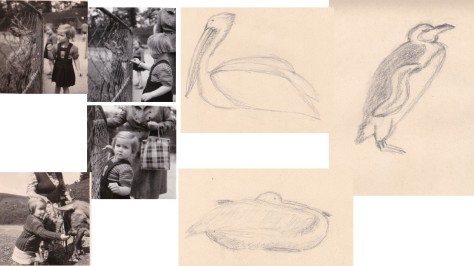 Some ten years later, our teacher took us to the Basel Zolli to practice drawing animals; “my” pelicans and “my” penguin are from that time.

As a student, I took photos in the Basel Zolli and developed them in the kitchen-darkroom. The black-and-white polar bear is resting calmly on its paw on a frosty-cold winter day.

No more polar bears in the Basel Zolli today. However, polar bears still live in the Stadtgarten of Karlsruhe, in their “icebergs” built in 2000 (colour photos taken in 2009). A hundred years ago, the Swiss Urs Eggenschwyler created an iceberg in the zoo of Rome; it will play a role in Pascal’s novel.

Now I go to the Basel Zolli with my grandniece and grandnephew. They very much like the flamingos – or flamands in French. The “lagoon” is near the main entrance of the zoo. 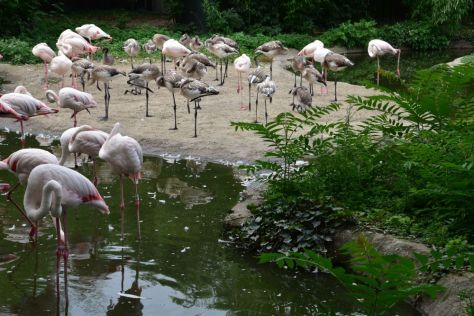 Pascal also seems to like flamingos. He has selected this flamingo for the cover of his book.

“Le zoo de Rome” is a puzzle of essays telling intertwined stories: My summary in a nutshell

Pascal tells his novel “le zoo de Rome” as a puzzle of small essays (two to four pages long) rolling out intertwined story lines. The real story of the zoo of Rome starts shortly before 1911 (construction and inauguration), ends in 2013 (two years after the centenary) and interacts with the historical events of one century.

I enjoyed the rich and dense language of Pascal. The words are concise and placed exactly where they fit. I took notes to keep track of the artfully intertwined story lines presented in small puzzle pieces with hints dispersed all over. Some of the hints I only understood, when reading the novel for the third time, for example:

These are some of the facts that Pascal’s novel told me about the zoo of Rome and other zoos:

The zoo of Rome is the backstage for creating caricatures about people and their behaviours. The observations, painted using fine brushstrokes, resonate with me. Let me give you some examples.

I love history and I love novels that unfold their fictions in a historical setting. One of my favourite novels is “natural history” (historias naturales) by Juan Perucho who selected the Spanish Carlist War of 1840 to intertwine the fiction of “pursuit of the vampire by a young scientist and the scientist’s happy end with his love” (2).  With Pascal’s “le zoo de Rome”, I found a second favourite novel that joins history and fictions.

Epilogue: Animals are the basic material of fables and the rose colour of flamingos conveys happiness

Let me come back to what Pascal wrote in the dedication, when giving his book to me:

In fables, the animals act like humans and convey a moral lesson. In “le zoo de Rome” the animals remain animals (some of them fictional) and are a wonderful backstage for the fictional story lines. Nevertheless, I sense some moral reflections that resonate with me: For instance Mussolini entering the cage of his lioness is underlining his delusion of grandeur. The bear Fritz greeting like a fascist does not know, what it does. The chimpanzee Bungo that the animal welfare activists save from the bar to transfer it to the zoo asylum seems to suffer in its cage (good intention of the activists, but…). The rose flamingos had to move to a pond near the entrance to convey the feeling of happiness to the visitors, but they suffer, because the pebbles on the ground are too large for them to walk on (the new owners of the “Natura Park” look more for appearance than for the welfare of their protégés).

Perhaps it is for the rose colour conveying happiness that Pascal placed the elegant flamingo on the cover. Do you remember the song “la vie en rose” by Edith Piaf (3)? It gave hope to the generation of 1945 to find happiness again, now that the war was over.

I sense that the novel begins and ends with optimism: It begins with the rose colour of the flamingo on the cover to greet the reader which invited me to open the book. In the last chapter, we see the happiness of Giovanna and her husband with their son, which may makes me dream about their future.

Let us look for facets of life that makes us happy, now, that this virus confines our freedom to meet. It was wonderful to use video conferencing for discussing “le zoo of Rome” within the framework of the Solothurner Literaturtage (4).

Insights on the road - this is what I am sharing. After having retired, I am on the road towards new business opportunities (consult & engage). I am also on the road discovering countries and people (travel spotlights). While on the road, life keeps surprises and insights (essays and élucubrations).