Whenever I come back to Berlin, I keep on finding that I still do not know everything. This time I had three new cultural experiences:

The Berlin Philharmonie: The concert with the promising and young conductor Andris Nelsons

Sabine noticed that there are still tickets available for the concert of the promising young conductor Andris Nelson. He conducts a piano concert by Mozart, “Burleske” (also with piano) by Richard Wagner and “Also sprach Zarathustra” by Richard Wagner. Emanual Ax will play the piano. We order tickets for Friday, October 17th.

Entering the Berlin Philharmonie, I indeed feel like in a circus. The roof is hanging high above us and we reach our seats using a maze of staircases. On the way to my seat, I notice the Sony Center just in front of the window. The Sony Center? So close? Hence they have built the concert hall in close vicinity of the Berlin wall! 50 years ago they built it at the periphery of West Berlin, overlooking the muddy grass pit that then was the Potsdamer Platz. And now, the Berlin Philharmonic is rounding off the burstling Potsdamerplatz that has emerged simce the wall has disappeared.

I take my seat. Below me there are the fortepiano and the empty places for the musicians. Almost every seat in the audience is taken.

I enjoy the concert. The young conductor is full of energy. I notice myself copy his movements (more in mind) – for me they “reflect” the music. Mozart’s harmonies always calm me down. The Burleske of Strauss I find more difficult to listen to. In the lucent wood above the piano keys I sometimes watch the agile hands of Emanuel Ax. After the break, “Also sprach Zarathstra” starts very loudly. Nelsons conducts a much larger orchestra now. The banging start is too loud for me – like a shock. But the critique seems to like this start. As the flow continues more quietly, I try to understand, what Zarathustra is saying. While I liked to watch this conductor that shows emotion, the critique concludes that Nelsons has not yet reached the maturity to take over the Berlin Philharmonics from Simon Rattle. Well, I am not an expert at all. Can it be that the high average age of conductors determines, how much body movement ia allowed to young conductors?

Just next door to the Berlin Philharmonie, there is the Museum of Musical Instruments. Wikipedia says “The Museum holds over 3,500 musical instruments from the 16th century onward and is one of the largest and most representative musical instrument collections in Germany.” Here is a selection of three instruments. 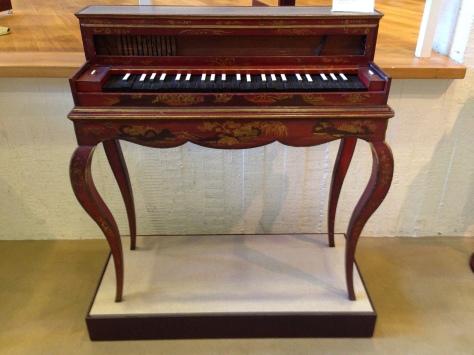 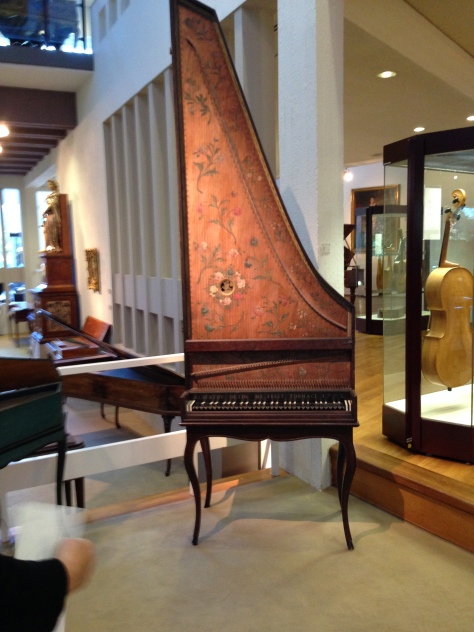 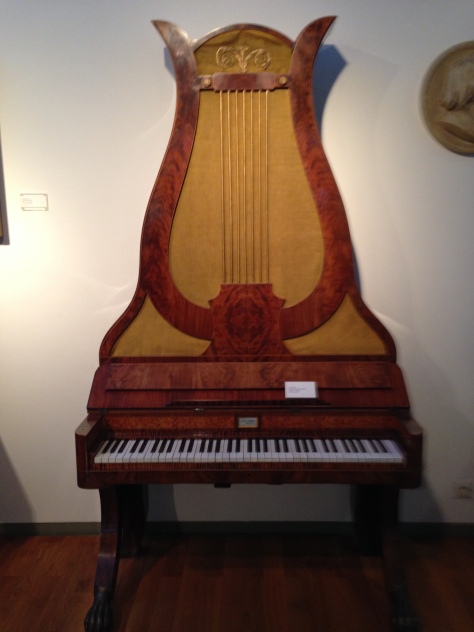 The museum is also proud of its mighty Wurlitzer.

On Sunday October 19th, the museum invites for the “Fest der Freunde” (party of the friends) to celebrate the foundation of the society that will support the Museum of Musical Instruments. Antoinette, my friend from school times, told me about the event. Conny guides through the museum, explains the background of the key instruments and has samples played (sometimes she plays herself). Andreas presents his evaluation of one clavichorde from around 1800. It has very unusual design, as it has a second sound board and the sound board is not well strutted. The builder wanted to make the clavichorde louder, but this design made the instrument less loud. “I think this is not a good development”, Andreas says politely. Now he considers to renovate the clavichorde as is – and then it cannot be played well – or to document the status and reonovate it such that it can be played properly. Very interesting.

Also not far from the Potsdamerplatz there is the Martin Gropius House. Gropius? I expect a modern building in the Bauhaus style. And then – I find this classical late 18th century building. The explanation: Martin Gropius is not Walter Gropius, but his great uncle. Walter Gropius was a member of the Bauhaus, not Martin. And this is why, it is not a Bauhaus building, but has a more classical appearance.

The Martin Gropius House hosts excellent temporary exhibitions. Currently there is an exhibition about the Vikings. In the central court yard there are the remains of a boat – a viking longship. It was 37m long. Just the wooden bottom of the ship has been preserved. Metallic sticks have been added to give the idea of the longship. A lady teacher explains the boat to her boys and girls. Her presentation is lively and highly interactive. To round it off, she asks the children to draw a boat. One boy draws a wonderful sailing boat with a huge veil that inflates in the wind. He shows it proudly to Sabine.

Detailed topics are elaborated in the rooms around the central court yard. We have received audio guides with one track for children and one track for grown-ups. We both prefer the track for chlidren. In a dramatic tone, the voice says that Harald Blauzahn had a challenging life. In the tenth century he ruled over Denmark and Norway. He was invading the Normandie – successfully -, but Otto I (the strong ruler of the Holy Roman Empire of the German Nation) withstood his attacks. Harald Blauzahn adopted the Christian religion. On display is his rune stone that says: “King Harald ordered that this monument was made for his father Gorm and his mother Tyra, by Harald who subdued Denmark and Norway and converted the Danes to Christianity.” After the visit I google a bit, and I discover that I have met Harald Blauzahn before… under the name of “Bluetooth” which is a communication protocolle named after “Harald Blauzahn” – or “Harald Bluetooth”: The logo shows his initials in rune script (source: Wikipedia on Harald Blauzahn; see also the report of Stern: “Ein Wikinger namens Blauzahn“).

The Vikings were feared for their attacks, especially along the Atlantic and the Mediterranian coast line as well as along the rivers that they could reach from the Baltic Sea. They also traded. Some of their trading ports were Novgorod and Kiev. They founded the Kievian  Rus – the Ruriks were the first Russian emperor  dynasty (until 1610). The vikings also settled in Greenland and found North America. The rooms around the central yard illustrate their achievements. In the 11th century one of the Viking trading business models was no longer applicable: Christianity did not accept slavery between fellow Christians. The northern Christian kingdoms started to emerge (see Wikipedia about the vikings).

Well, Berlin always has some new insights ready for me. 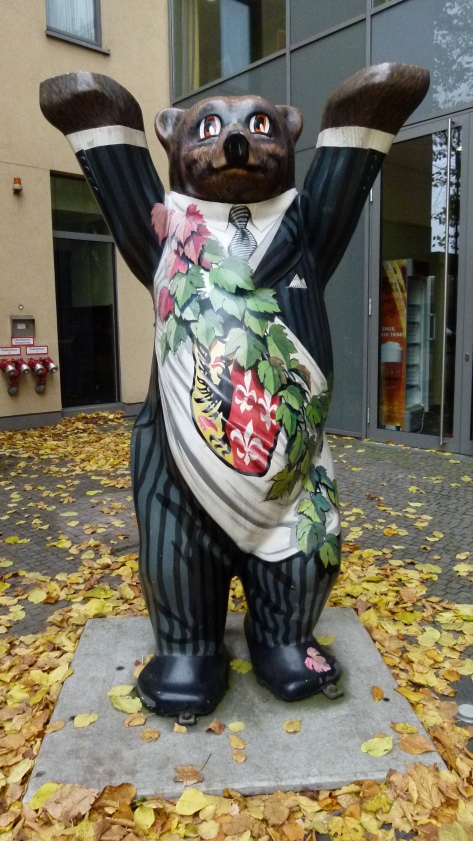