Berlin humor is special and refreshing, I believe

I enjoy the humor in Berlin.

For instance the buildings all have an official name as well as a second name. – such as the Victory Goddess on the Victory Column in Tierpark is called “Goldelse” (Golden Elsa). The Funkturm is the “Langer Lulatsch” (Long Guy). The TV Tower is named “Samkt Ulbricht” (after the GDR minister Ulbricht) or “Die Rache des Papstes” (The Venge of the Pope), as it shows a cross on the restaurant platform, when the sun shines (unthinkable for the GDR). The University Library has always been the “Kommode” (Commode, also my mum would always talk about the Commode). The Congress Hall is the “Schwangere Auster” (Pregnant Oyster), because of the shape that reminds of an oyster. There are many more of these  surnames – and they are consistently used in Berlin.

The people from Berlin are also good at telling anectodes. I like this one (though it is a little chauvinistic): Two cars stand in front of the red light, in the first car a lady, in the second car an impatient man. The light changes to green. The man shouts at the lady in the first car “Jriener wird’s nicht mehr” (it will never become greener or grüner wird es nicht mehr).

This time I come across rubbish bins full of humor

With humor the government of Berlin now tries to motivate the population to use the rubbish bins. This one says “heap helper”. Obviously a success – I have not come across any of these small heaps in Berlin. 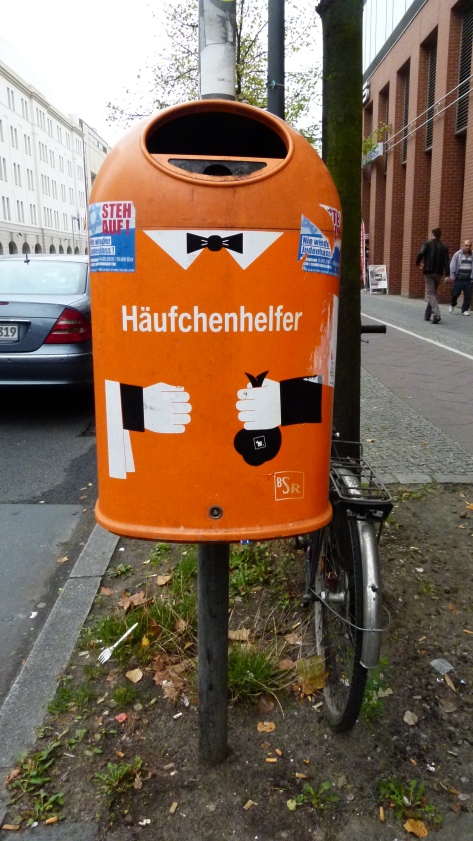 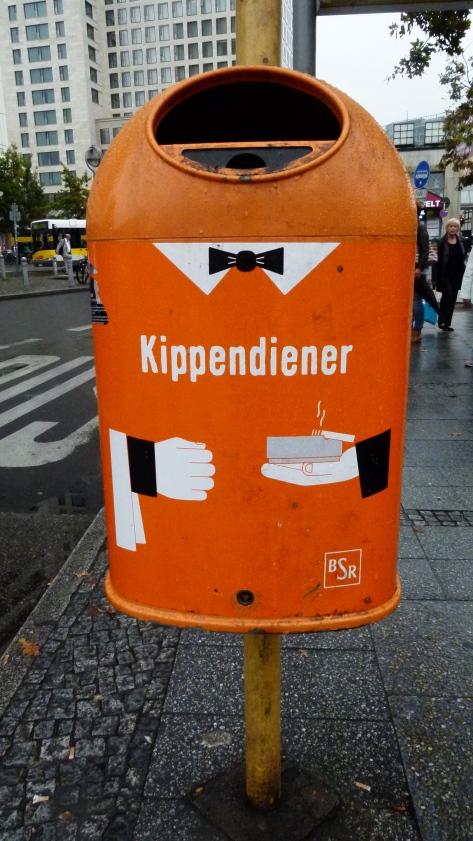 And in this bin we can save CO2. Literally it is a “savings box for CO2”.

The last bin in these series just reminds to behave properly in the city center or in the middle of Berlin (called “Mitte”). Literally: “Good manners in the metropolitan area “Mitte””. This rhymes well in  German. 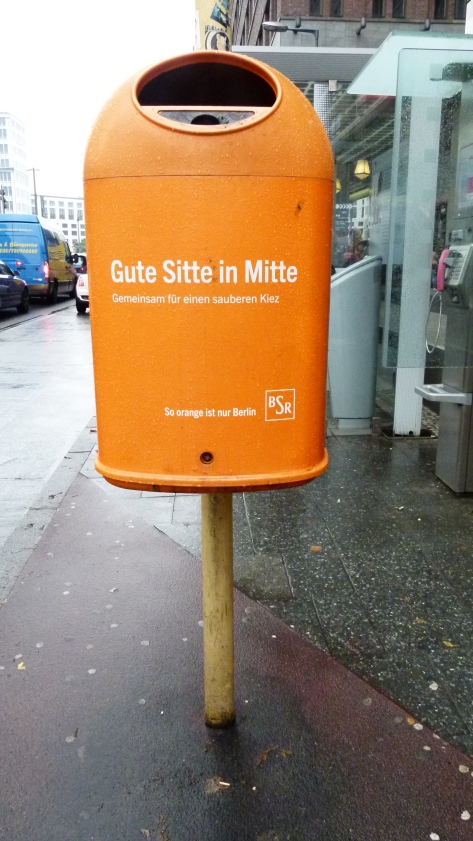 The traditional Berlin dialect that my mum spoke has almost disappeared in Berlin. I enjoy to hear it, when I come across it. Near Alexanderplatz I was not sure whether I found the right bus to Pankow – and the driver said simply: “Gen Se rin” which in Berlin slang means “enter” (Gehen Sie hinein). The slang is now almost restricted to former East Berlin – and it has a slightly rough and at the same time humorous touch – like some of the slogans on the rubbish bins.