In August 2022, we explore Thüringen. For a week, we stay at the castle Eyba near Saalfeld. After having visited Lauscha and Lehesten in the Slate Mountains of Thuringia from here, we next check out the Via Regia with cities full of history and culture.

Our first target on the Via Regia is Weimar, the classic centre for culture around 1800, primarily related with the names of Schiller, Goethe, Wieland and Herder.

Anna Amalia’s Rococo library – this is, how the Weimar Classicism started

What we absolutely want to visit, is the Anna Amalia library that marked the beginning of the period of Weimar Classicism around 1800.

After having arrived at Weimar, we immediately head for the tourist office to buy a ticket for Anna Amalia’s Rococo library, as the number of visitors per day is restricted. We get a ticket for 11:30. Soon we stand in this charming room and admire the books on three levels. 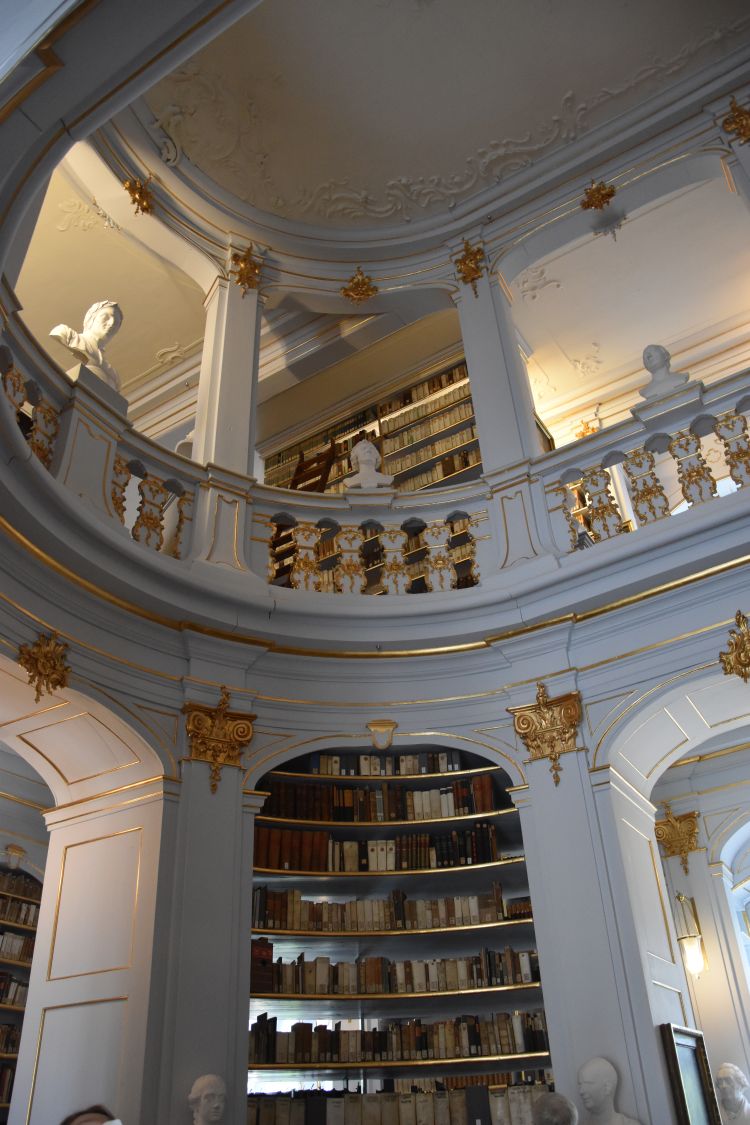 Duchess Anna Amalia von Sachsen-Weimar-Eisenach (1739-1807) was highly educated. With her, the golden time of the Weimar Classicism started. She enlarged the library that her husband, duke Wilhelm Ernst, had initiated, and today, the library carries her name.

The ceiling fresco “genius of fame” had to be restored after the fire. 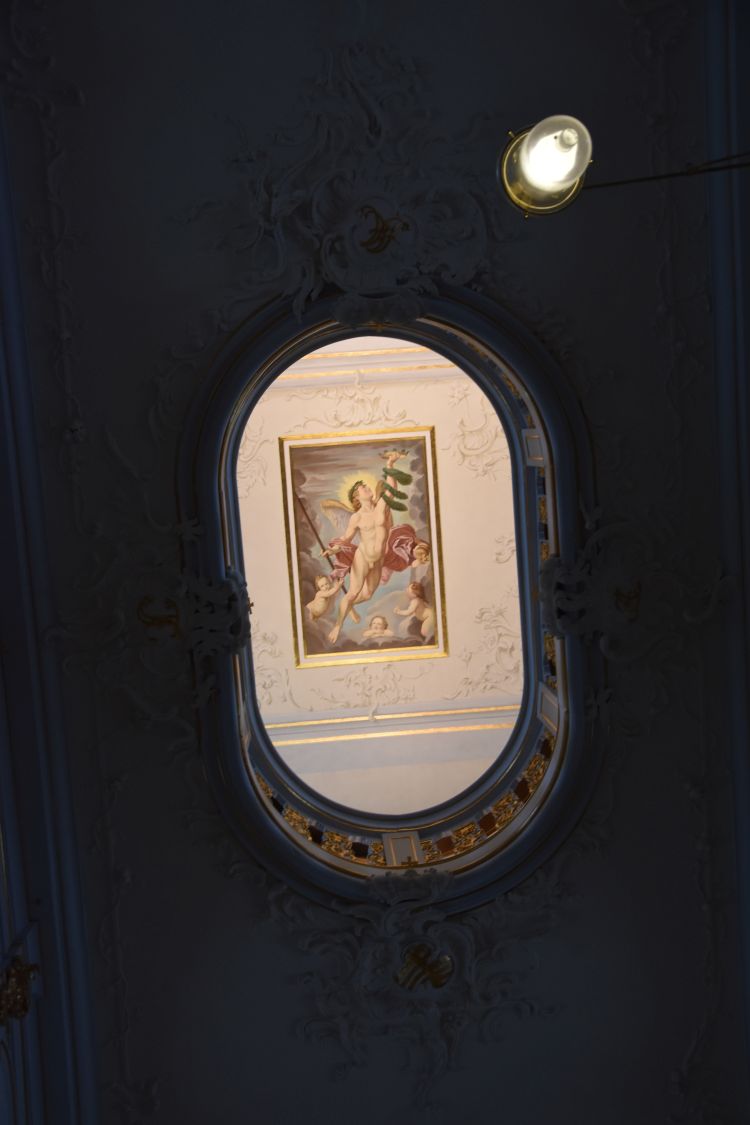 The Anna Amalia library is located in the Green Palace at the Demokratieplatz, behind the statue of Carl August, the son of Anna Amalia. 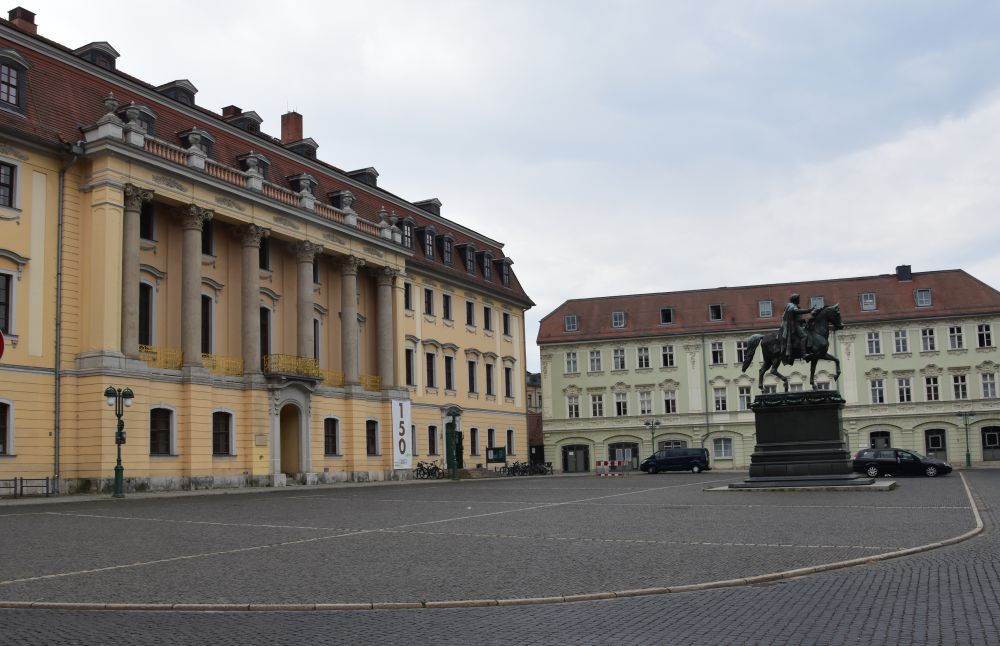 Anna Amalia’s son, Carl August, reached full age in 1775 and reigned until 1828. These were the years of the Weimar Classicism, with the four main representatives Wieland, Goethe, Schiller and Herder.

The eldest, Christoph Martin Wieland (1733-1813), was called by Anna Amalia to educate her two sons. His statue stands on the Wielandplatz, but I have not noticed it, though we had parked our car in the garage “am Goethehaus” near the Wielandplatz.

The second personality is Goethe (1749-1832). Anna Amalia’s son, the young duke Carl August, visited Goethe at Frankfurt and invited him to Weimar. Goethe moved to Weimar in 1775.

In 1776, Goethe acquired the idyllic house near the river Ilm. 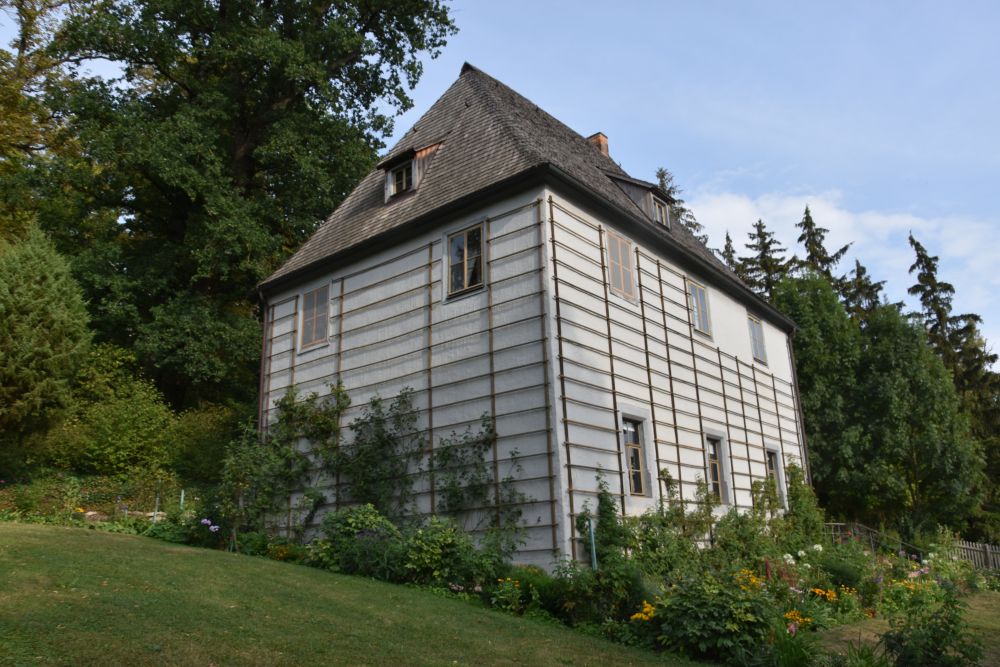 In 1782 he moved to the Frauenplan (square) that is now a museum. 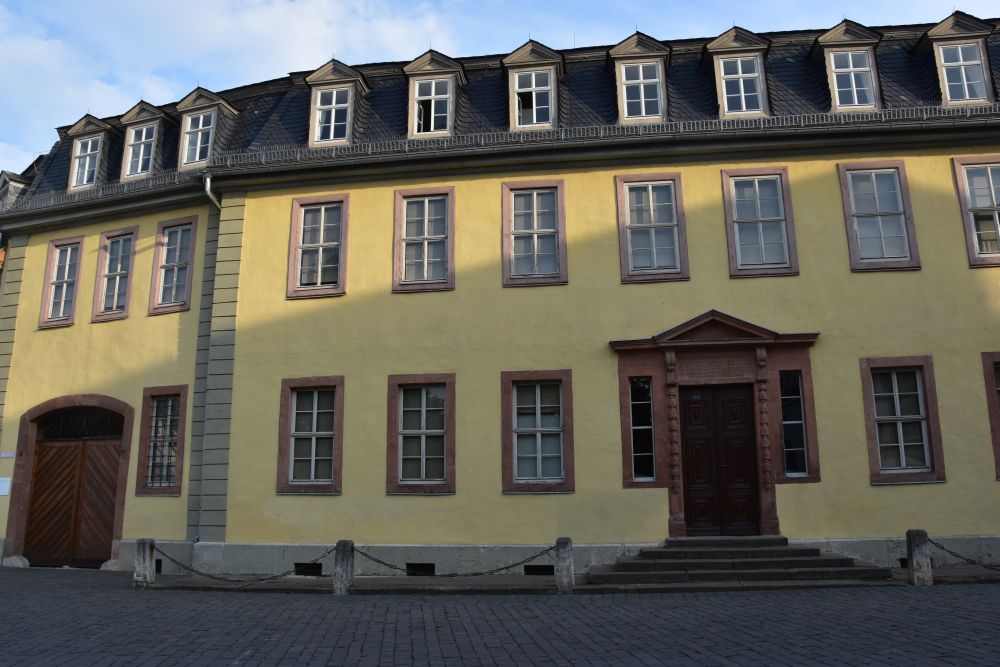 Goethe started his exchange of ideas with Schiller in 1794. In 1799, Schiller moved to Weimar. His house is also a museum, and the street carries his name.

The friendship of Goethe and Schiller lasted about ten years, until Schiller died in 1805. Their statues dominate the Theaterplatz. 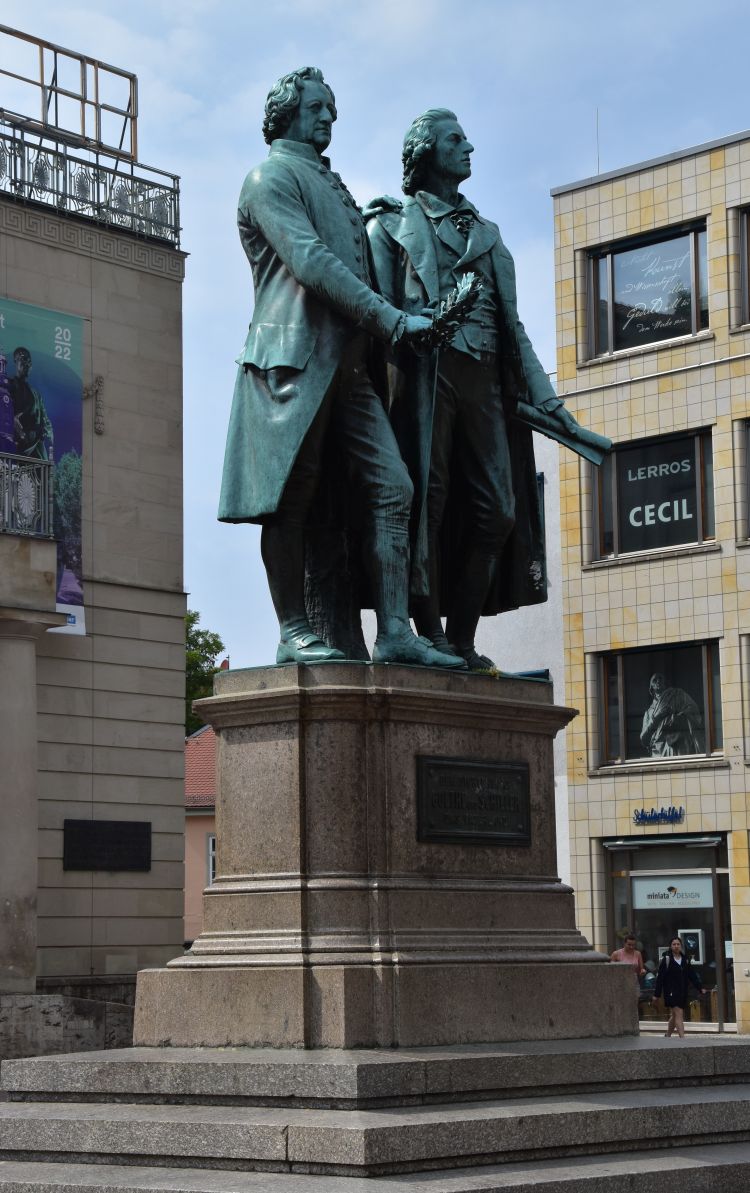 Though Schiller was 12cm taller than Goethe, their statues are of the same height, and, in the figurative sense, this is certainly true.

Johann Gottfried Herder (1744-1803) was the fourth of the main representatives of Weimar Classicism. He met young Goethe at Strassburg in 1770 and was a source of inspiration for him. Herder moved to Weimar in 1776. He was the superintendent of the Peter and Paul Church from 1776-1803. That is why the church also carries his name. 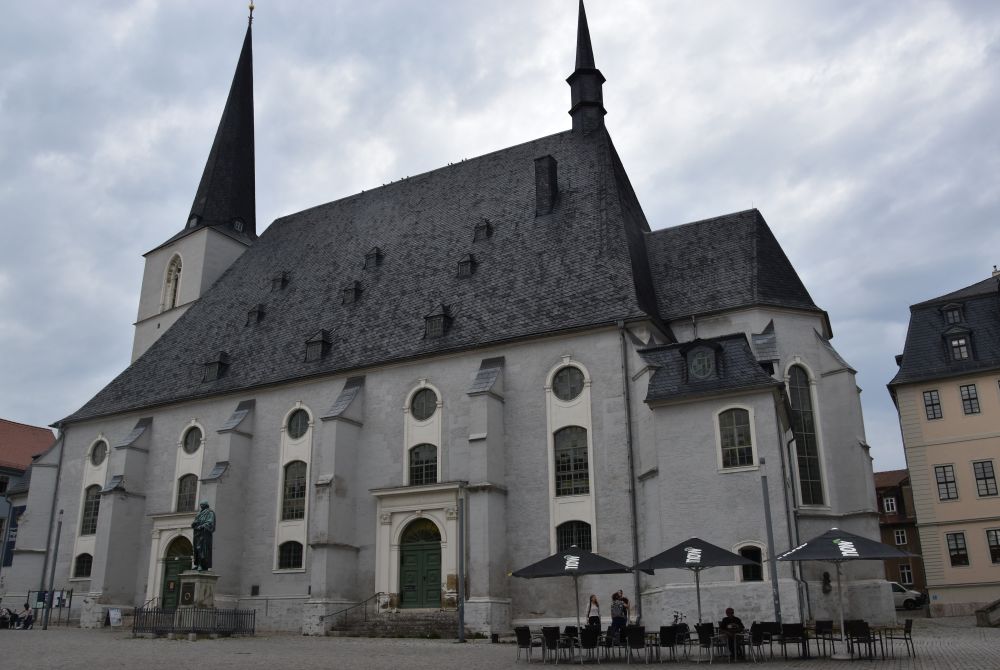 Herder’s statue stands in front of the church. 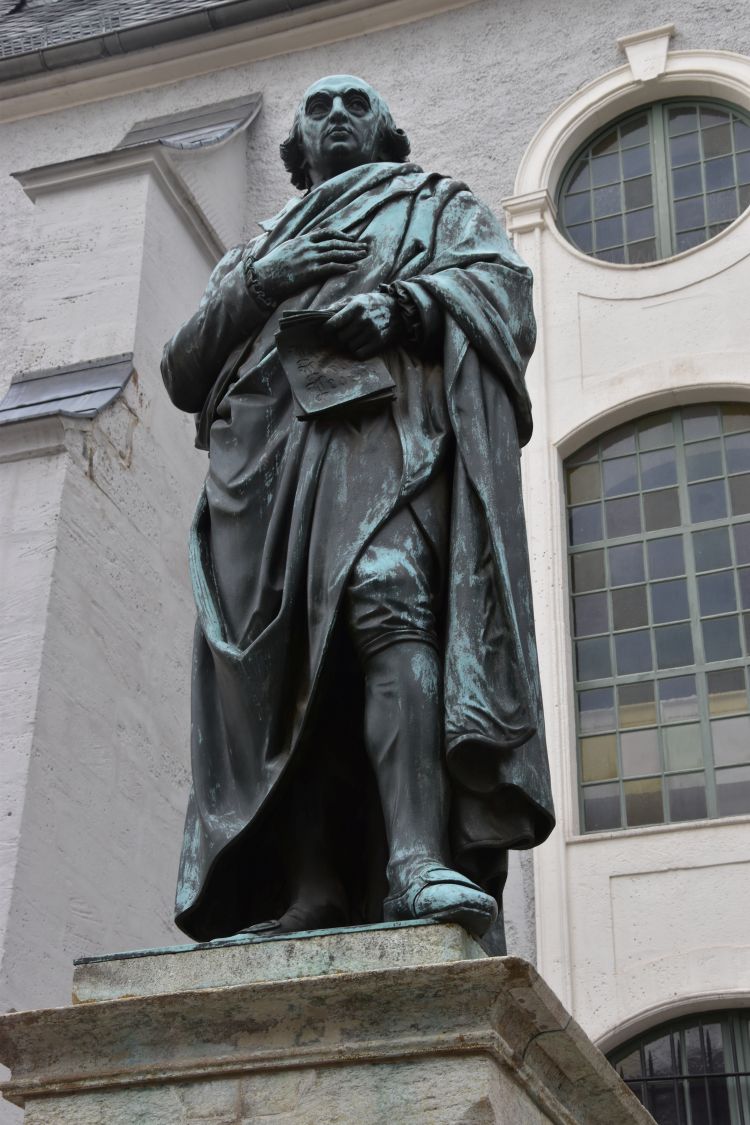 Inside the Herder Church, we find this altar of Cranach Junior.

Interesting: John the Baptist (dressed in fur) attends the crucifixion together with Cranach (middle) and Luther (left). Christ’s resurrection and defeating the devil are on the same picture.

The poets and philosophers used to visit the hotel Elephant. Still today, it is a renowned hotel with a lush garden.

The history of the hotel Elephant goes back to the 17th century. Since then, it has received many prominent personalities.

The Weimar Republic founded in 1919

In the National Theatre, the first German Republic adopted the constitution of the so-called Weimar Republic.

The classicist building across the theatre, called “Haus der Weimarer Republik“, is a former carriage house. It invites to learn more about the Weimar republic as well as about chances and threats for democracies. Sorely, the Weimar Republic ended up as the National Socialist Dictatorship that shaped ten years of the history of Weimar and of Germany.

Certainly an interesting museum, but not for us today.

The Bauhaus -beauty and cult

In 1919, Walter Gropius founded the Bauhaus at Weimar, with the objective to combine fine arts and craft. It was a new way of thinking about life. In 1925, the school moved to Dessau, and in 1932 to Berlin. In 1933, the school was closed by the Nazis.

One hundred years after the foundation of the Bauhaus, Weimar opened up its new Bauhaus Museum. From outside, it is a harmonious and sober building.

We enter and buy our tickets.

The exhibition starts with photos and films about the life that changed so much in the 1920’s. Women became more independent, as the “quick kitchen of the single woman” shows.

Cars became more common. Also, women drove them (my grand-mother did so as well) and some even knew, how to repair them.

The exhibition continues showing the Bauhaus pieces of design that have become cult classics, such as the jar, …

… or the buildings architectured with clear lines.

I buy the book about the museum to continue enjoying the Bauhaus design at home. Fortunately, I live near the Stuhl Museum of Weil that presents many of these classical pieces of design from the beginning of the 20th century.

Strolling through the streets and shopping

In addition to offering so much culture, Weimar is a welcoming city that invites to have coffee – we do so on the market square next to the townhall. 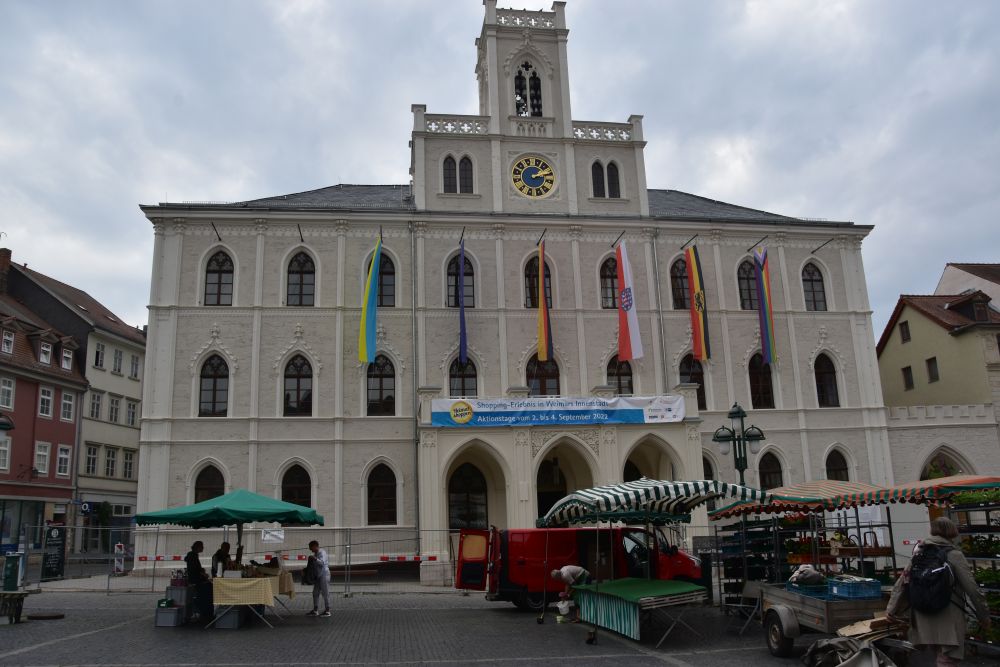 They also sell the so-called Rostbratwurst here that the Thuringians and the tourists love. However, I am not a sausage eater and do not join the lines waiting for their sausage in a roll.

The shops are inviting, for instance the “Taschentanten” (literally aunts selling bags), …

… the goldsmith “Schädlich” (literally “harmful”, what a name), …

… or the Bauhaus shop, where I buy “Faust I” and “Faust II”; the two gloves will be a gift for a good friend of mine.

To round off our visit, we stroll through the romantic “Park an der Ilm”. Ilm is the river that flows through Weimar.

It is dinner time. At the Giardino we eat excellent antipasti. 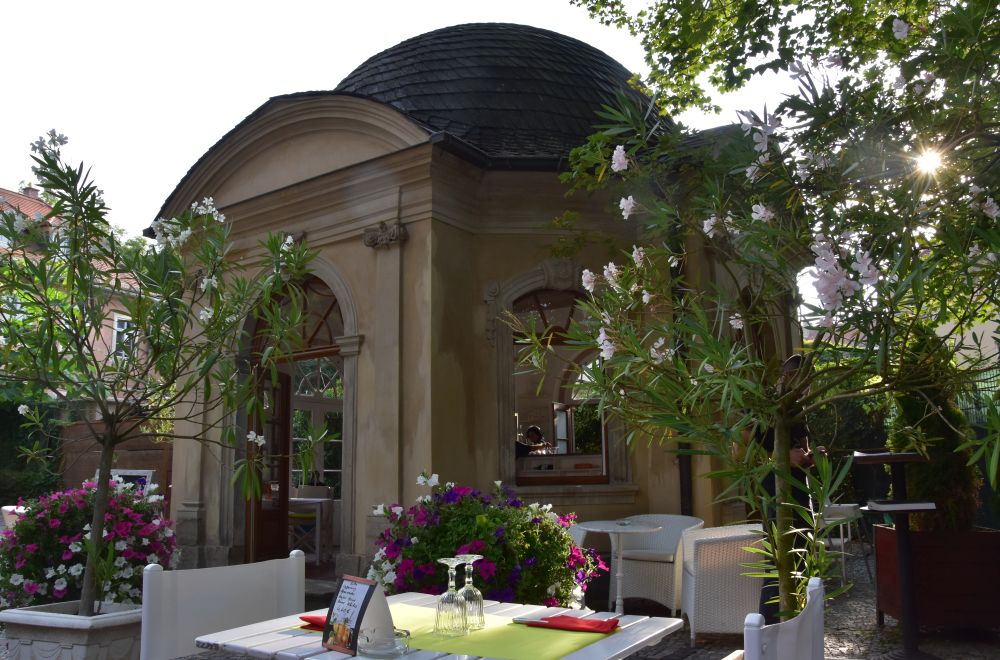 After that, we return to our garage, pick up our car and drive back to “our” castle Eyba near Saalfeld. Weimar was well worth a visit.

Weimar is located north of “our” castle Eyba near Saalfeld, where we are staying for a week.

One thought on “Exploring Weimar in Thüringen – Weimar Classicism, Weimar Republic and Bauhaus”