So far we have explored the Roman city of Augusta Raurica, first its history and the city centre. Then we moved on to more “remote sights” and investigated the Roman Castrum and the show room under the church at Kaiseraugst.

Now, we visit the other more “remote” sights of Augusta Raurica, including the animal park. 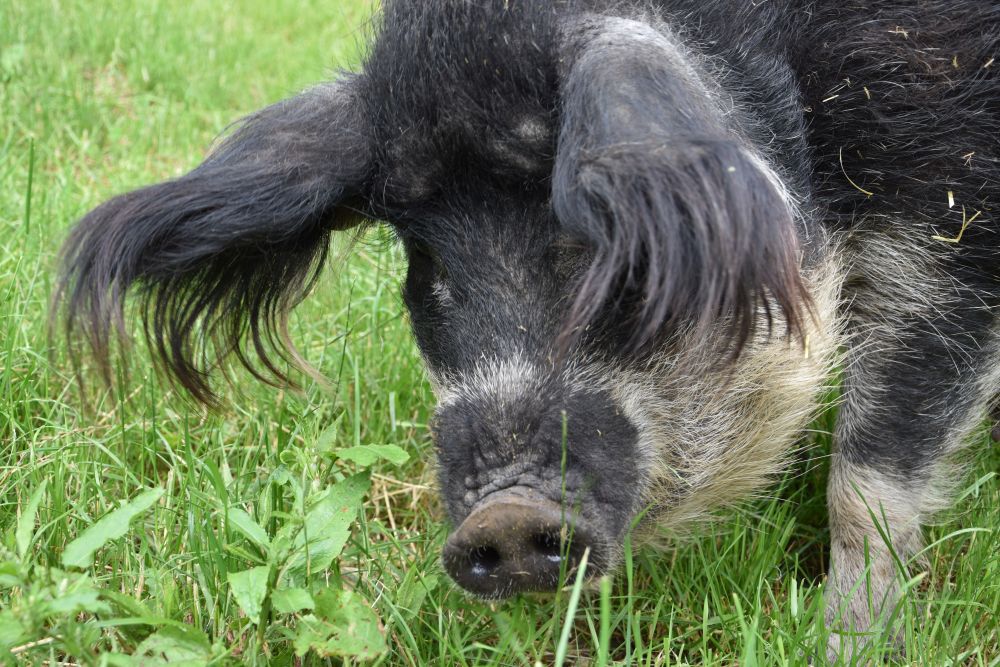 On the plan of the Roman remains, our next destinations are: 10 (craft house), 14-17 (brick manufacture, town wall, tomb, east gate, animal park), 18 (cloaca and cellar), 12 (outer amphitheatre) and 11 (Grienmatt temple). Further remains of the town wall can be seen south of (12) crossing the motorway. 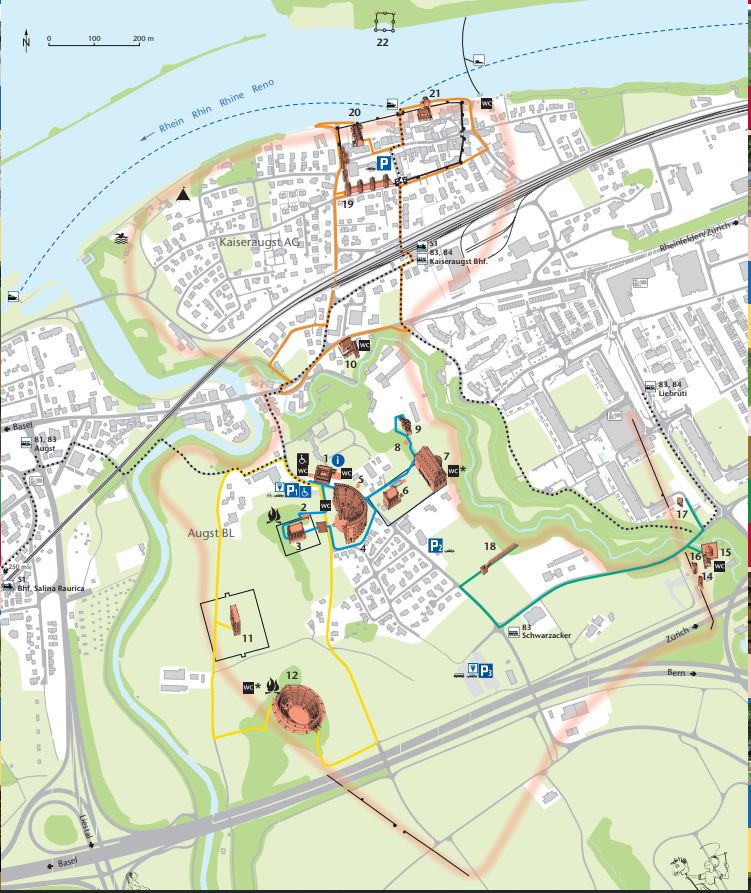 Next to the noisy main road (Kantonsstrasse), the ruins of three houses have been preserved, one being a former fullery (Tuchwalkerei) and one a former restaurant. Panels make the ruins come to life. This is what the craft house complex might have looked like in Roman times… 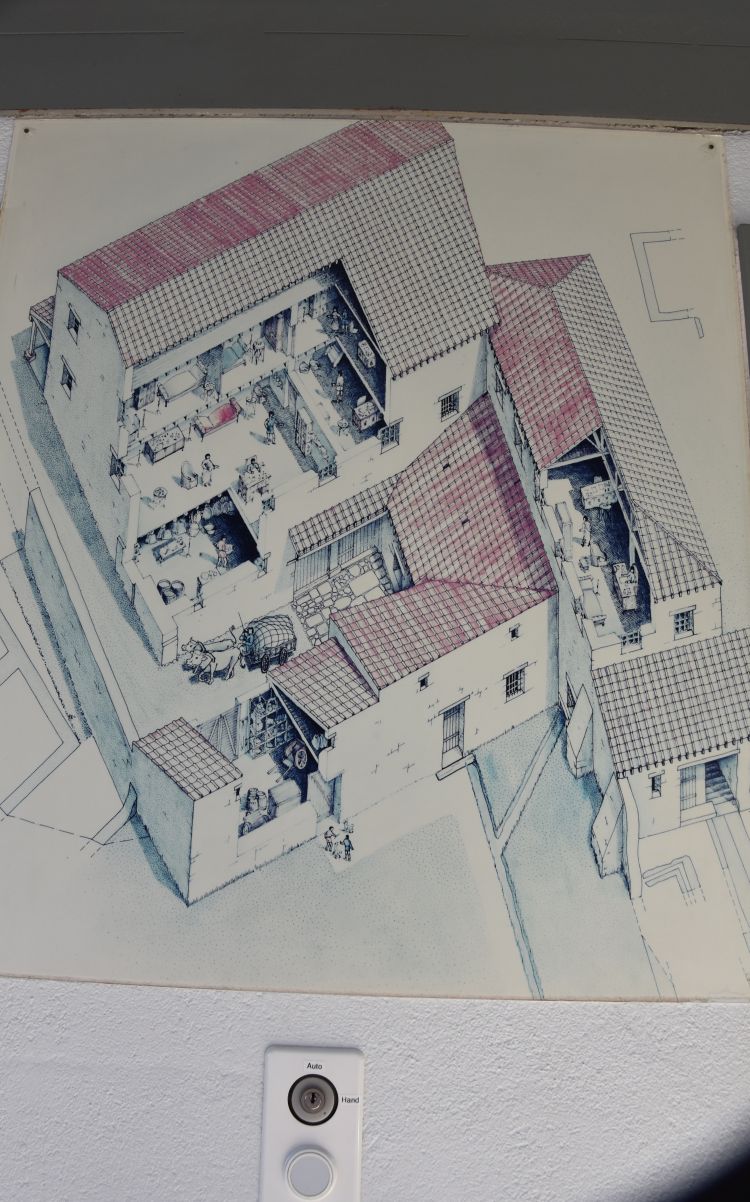 … and these are some of the ruins that remained from the restaurant. 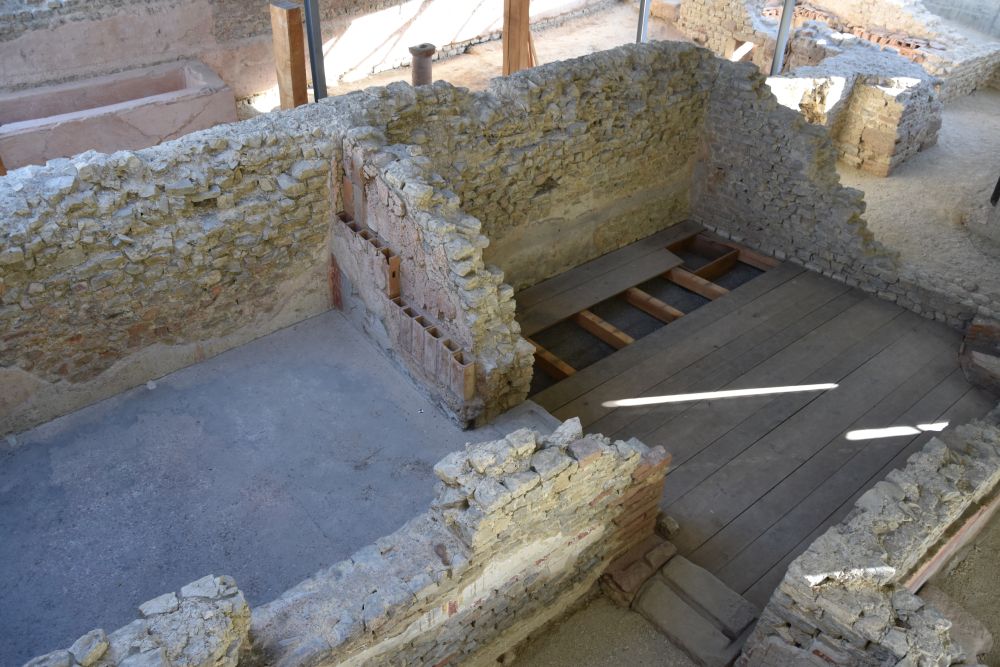 The craft house complex was bordering the old Roman road connecting Rhaetia with Gaul. I start to dream of the passers-by that entered the restaurant here to have a beer (“cervisia” in Latin) and a meal.

Ruins of a brick manufacture are in the residential area Liebrüti. 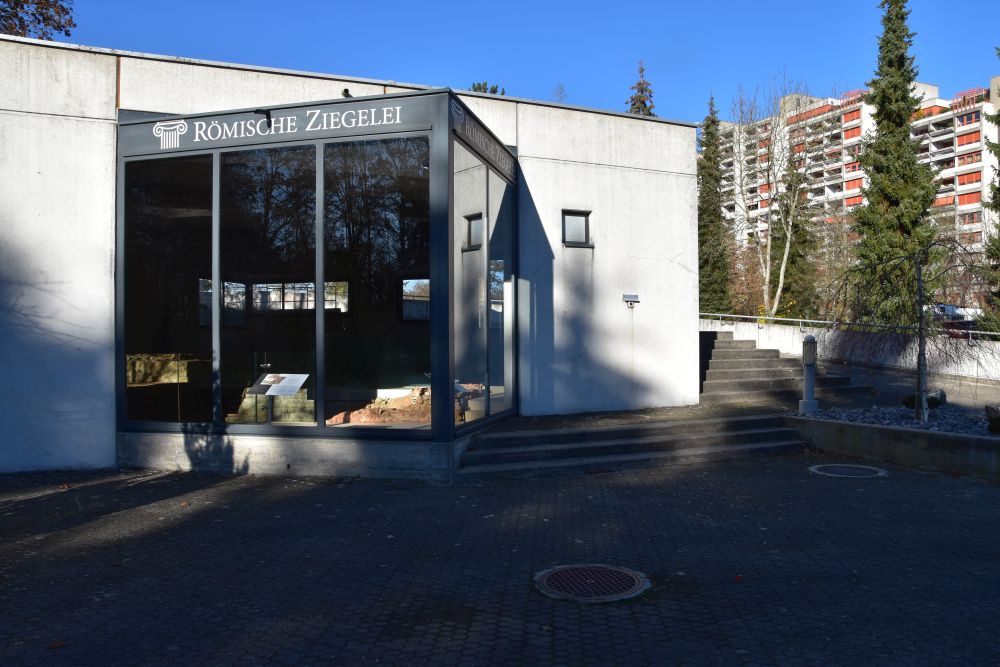 The Romans used baked clay for tiles and bricks. They were particularly useful for their heating installations. The Romans had standardized the production, as the explanatory panel explains. 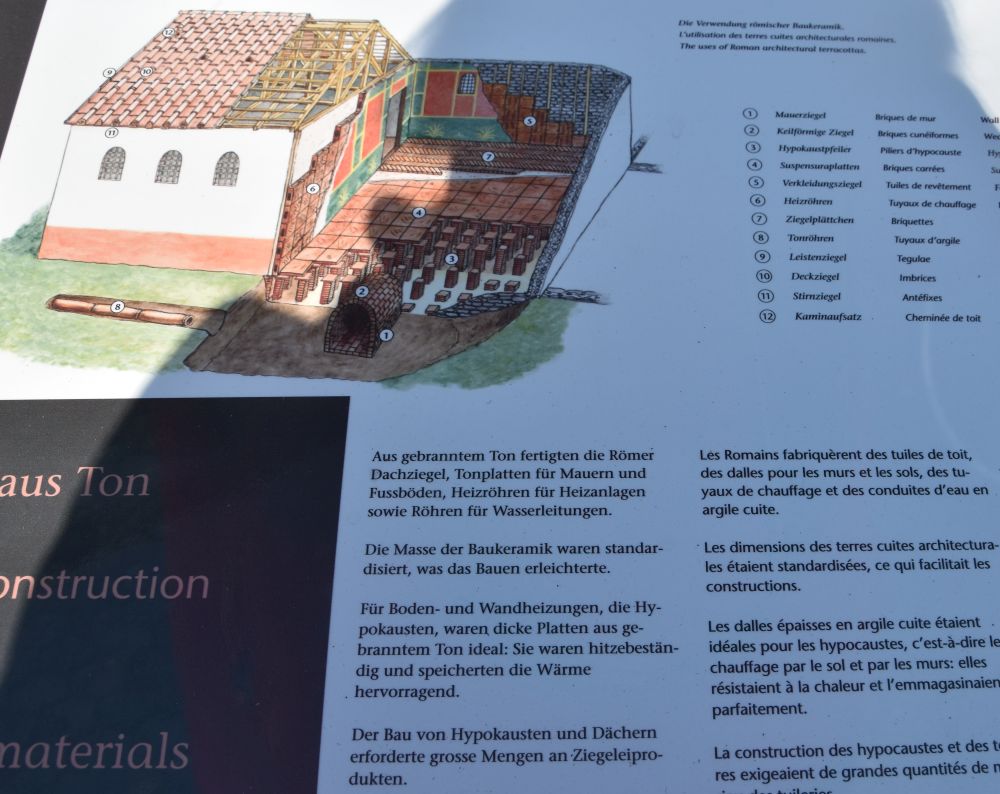 The factory is closed. I look at the ruins through the mirroring glass.

These are the remains of the tomb. 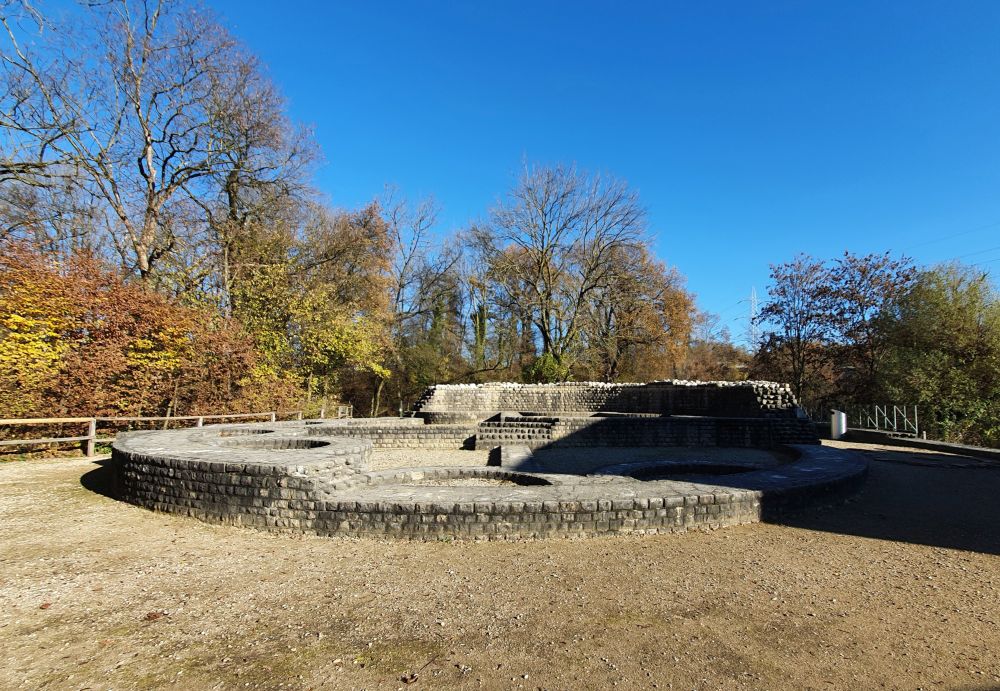 As the panel explains, the tomb monument was round, about 5m high and covered, a bit like a tea kettle. 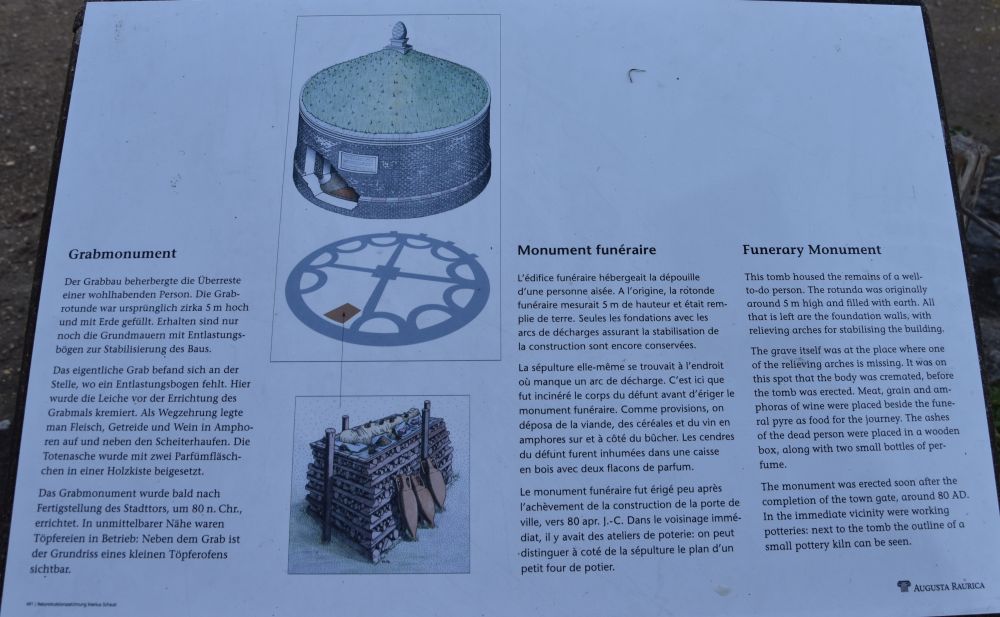 Next to the tomb I admire, how the Romans built their bridges. Some sandstone building blocks are on display. 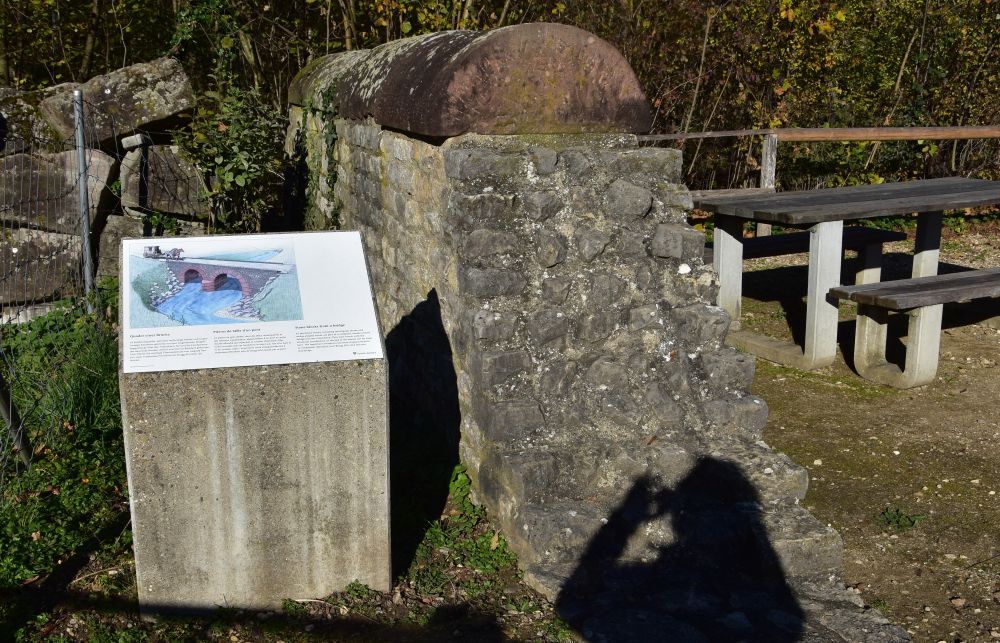 Again, everything is documented carefully to bring the ruins to life.

This is what the east gate once looked like. Constructing the defensive wall around Augusta Raurica had started in the late first century AD, but the walls had never been completed. Even the east gate was not really a gate, but just two towers. 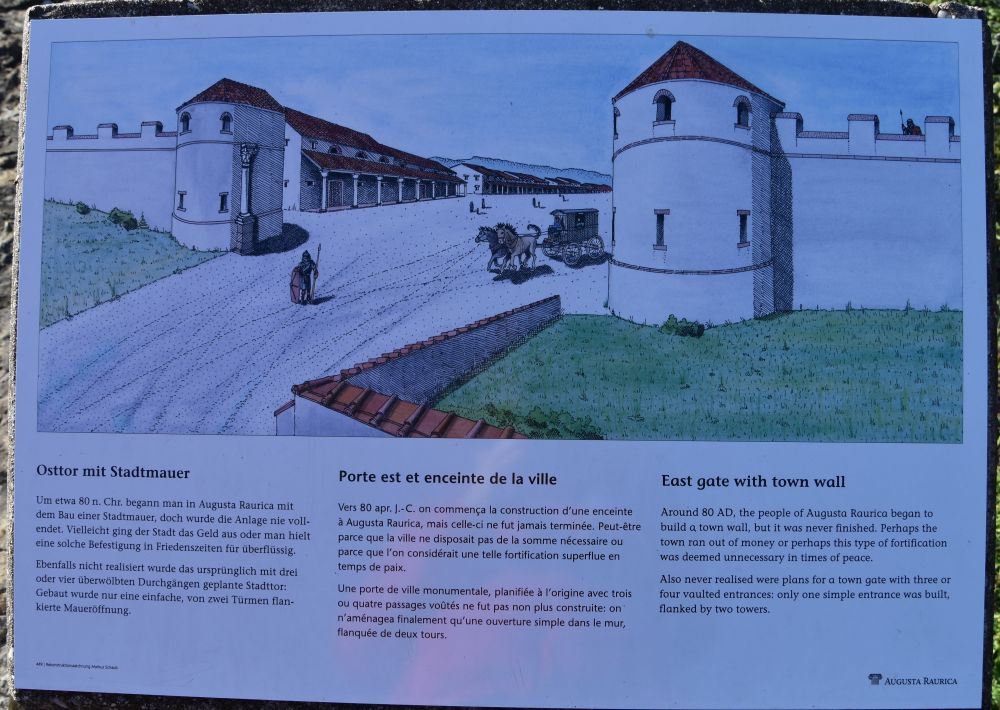 This is one of the two towers. 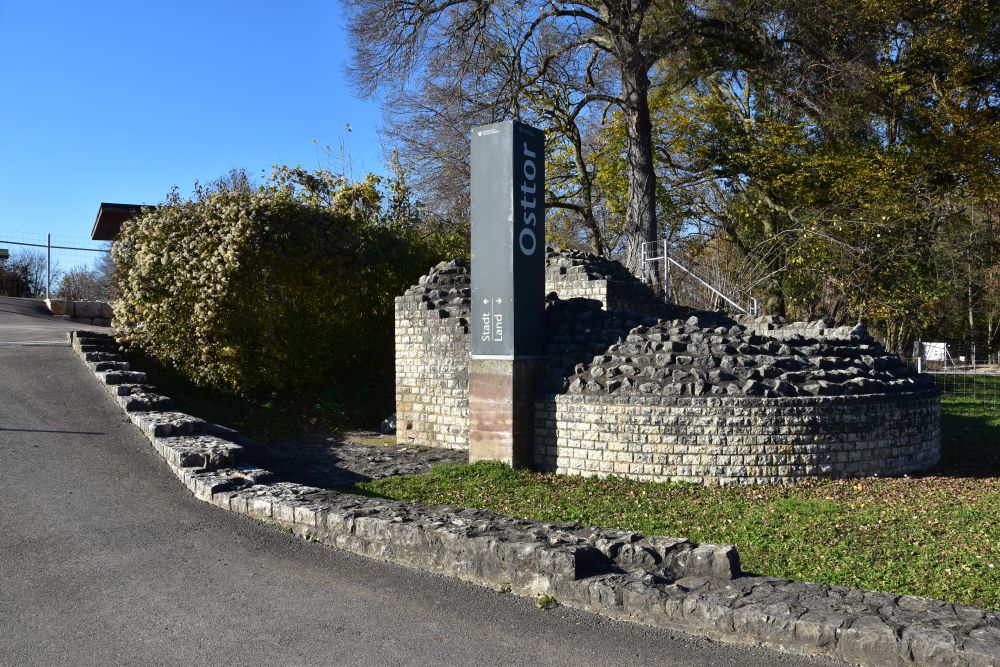 South of the residential area Liebrüti and close to the brick factory, part of the eastern fortification wall has been preserved. 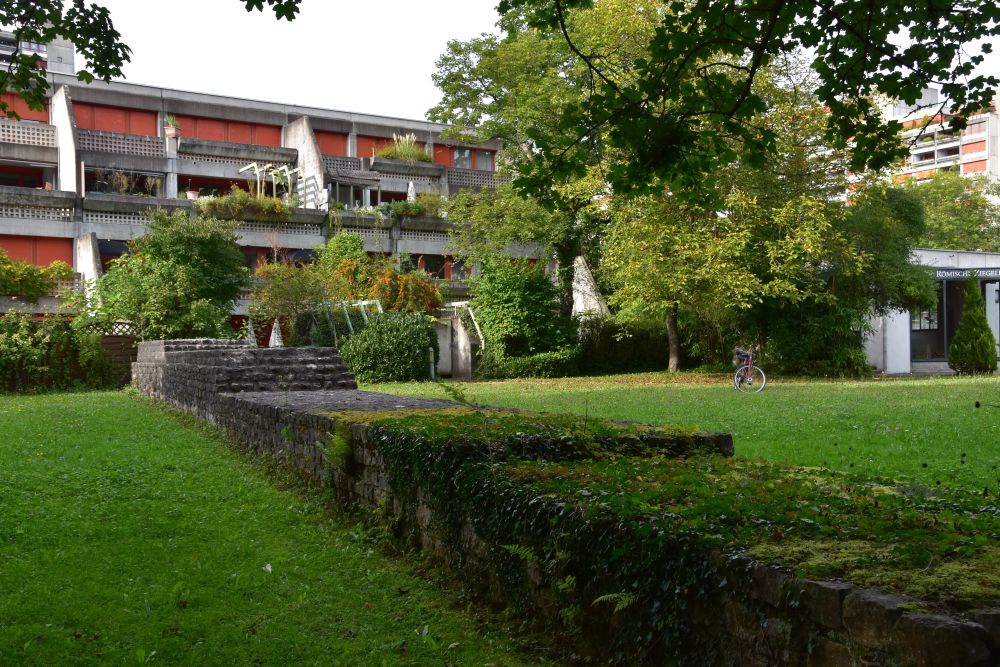 South of the amphitheatre (12) the motorway cuts through the town wall. On the southern bank of the motorway, one part of the fortification wall has been carefully marked, just in front of a traffic sign. 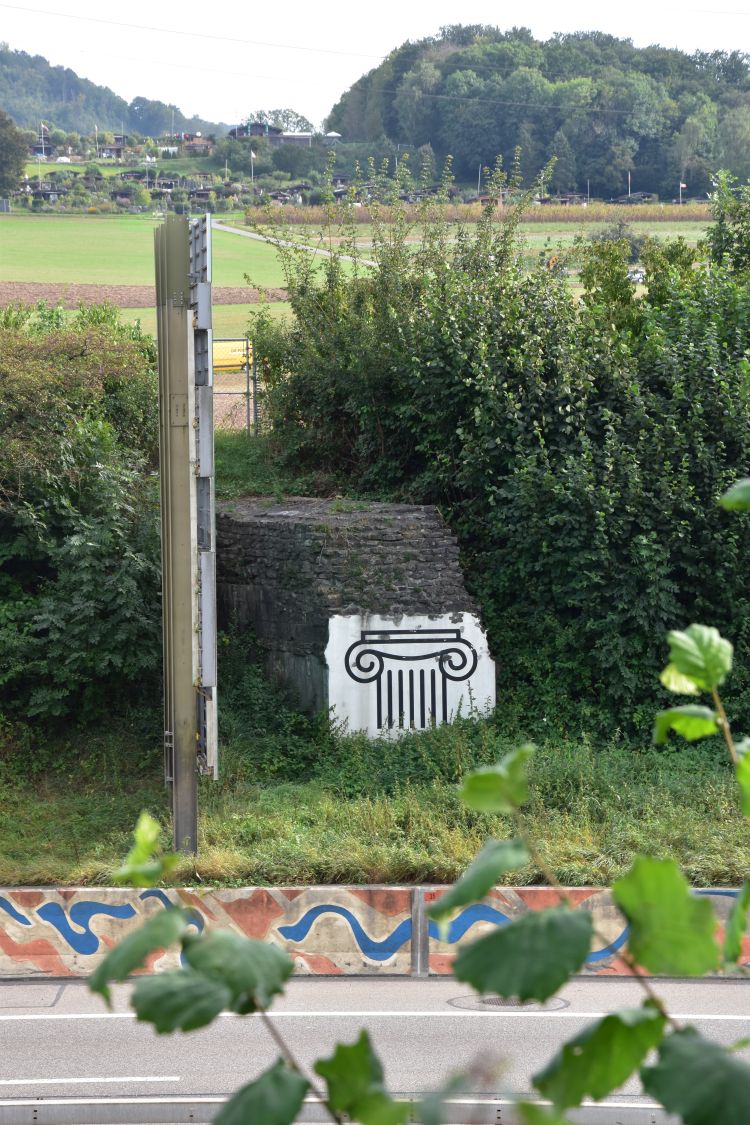 I have to admit, it took me some time to identify the wall across the scrubs. Furthermore I have to admit that I must have passed by this historical monument hundreds of times in my car without noticing it. Again I am impressed, how well marked it is and how well explained it is on the panel that I now discovered on the way to the outer amphitheatre.

Near the east gate, the small animal park must be the kids favourite. It is a collection of ProSpecieRara animals that allude to the animals the Romans once had. The black pigs love the warm sun. 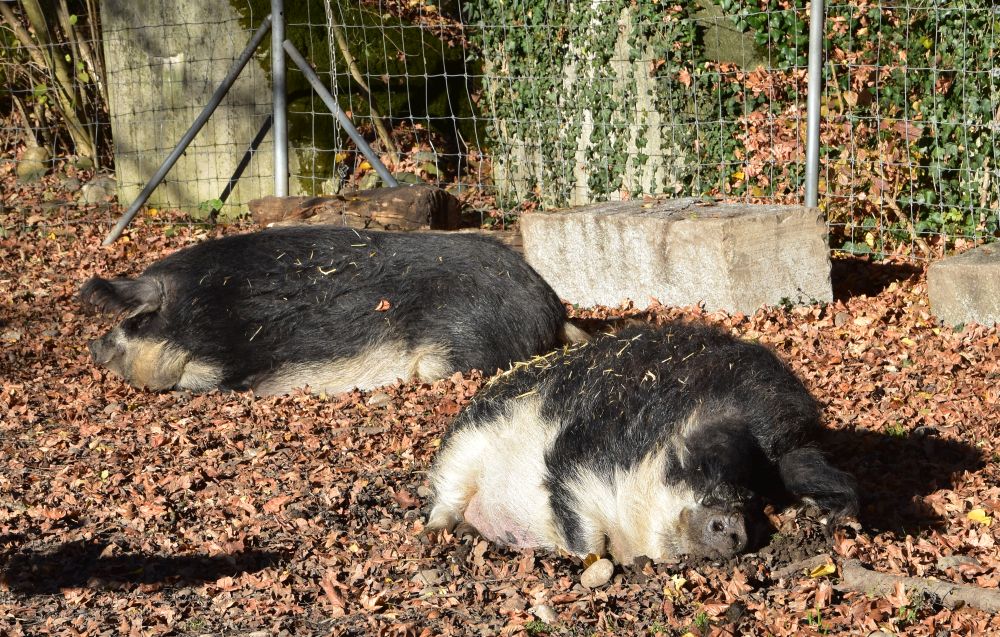 The geese walk around their pond, chattering at me. The Romans valued them much, because their chattering once saved Rome (387 B.C., when Celts tried to conquer the Capitoline Hill, the geese chattered and warned the citizens of Rome). 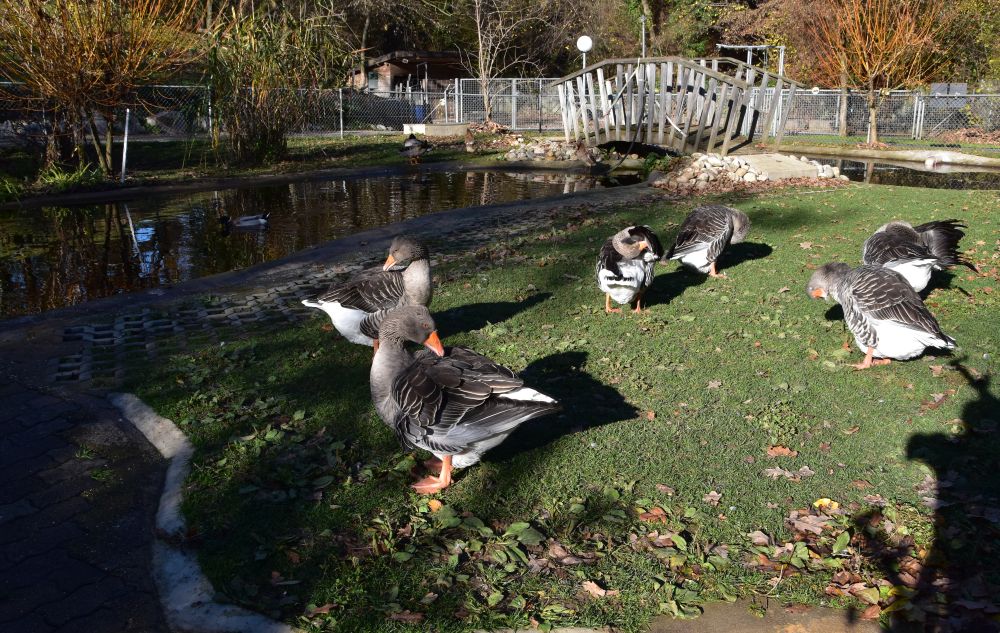 There are some Roux du Valais, a species of sheep that was saved from extinction thanks to ProSpecieRara. They look at me from behind the fence. 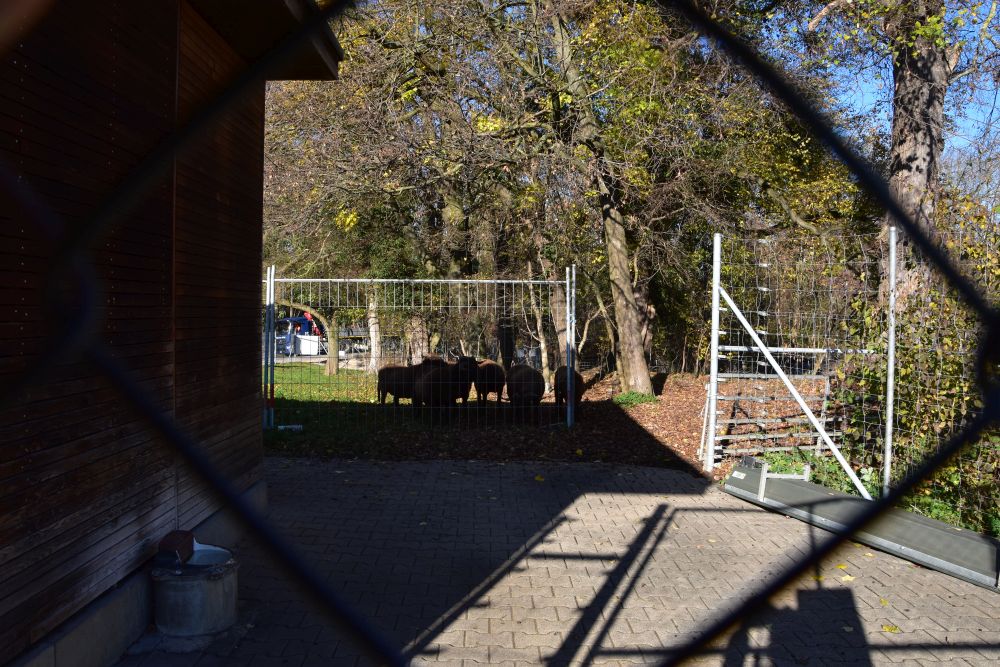 The peacock seems to have a nap. Pretty complicated to lie down with all these feathers. 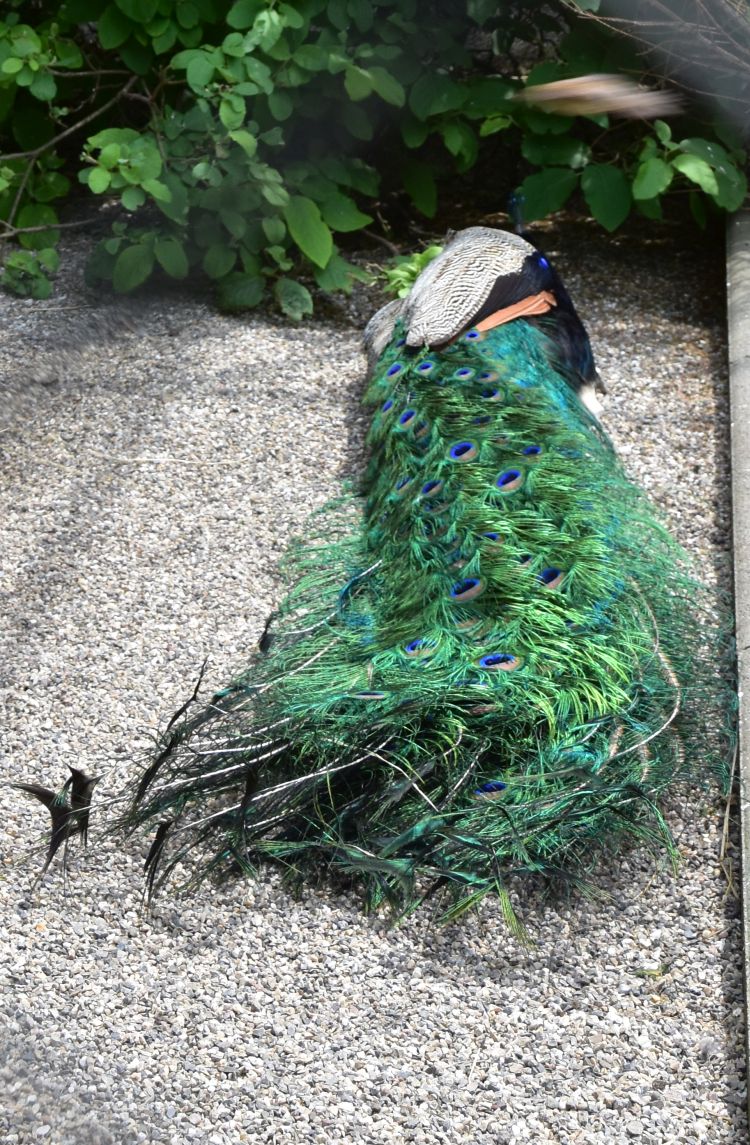 I have visited this charming small animal park so many times. I have watched the kids admire the animals so many times. And only recently, I have discovered the pink panel that explains the origins and the use of the animals. For instance, rich Romans held a peacock in their garden, because it is a beautiful animal. They also liked to eat the meat and used the feathers as a fan or as decoration. 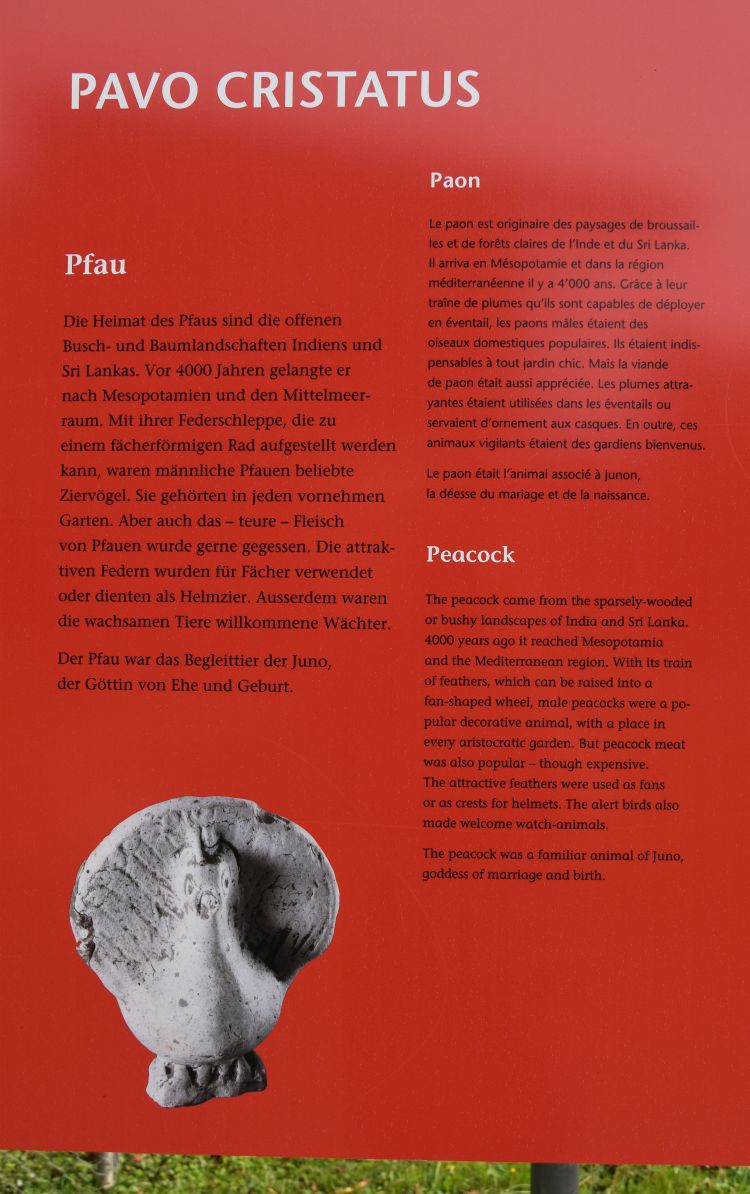 Yes, every time I return to Augusta Raurica, I discover something that I have not taken notice of so far. The archaeologists have done an encompassing job of documenting it all.

These panels in the middle of the open field point to the water channel (cloaca) and to the cellar under the former Roman baths in the upper city centre. In the background we see the modern residential area Liebrüti. 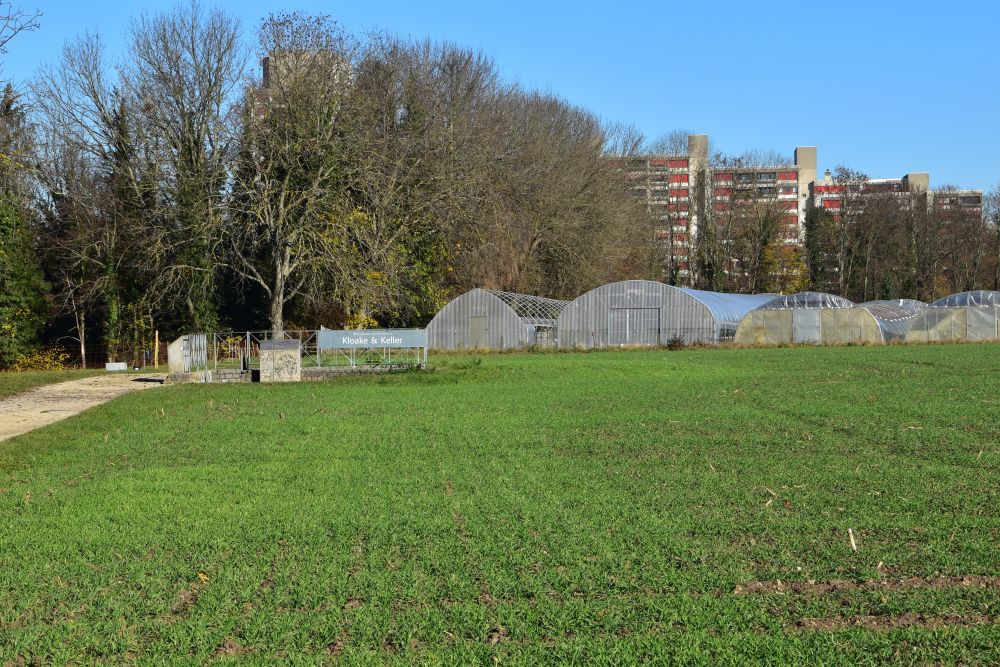 Not much is visible from the central baths built in the 1st century AD, only the channel that drained the water from the baths. The floor is made from sandstone and the walls are covered with limestone, as the panel explains. 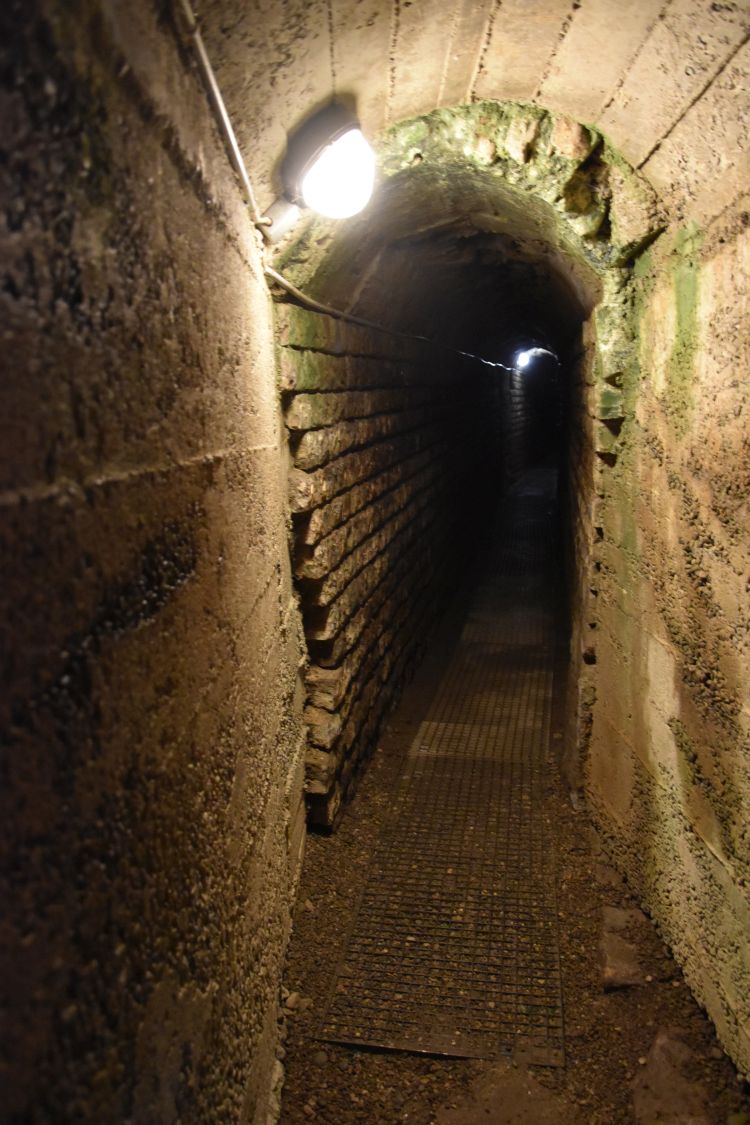 The cellar under the former baths belonged to a house that was here, before the baths were built. The niches were used to place goods. 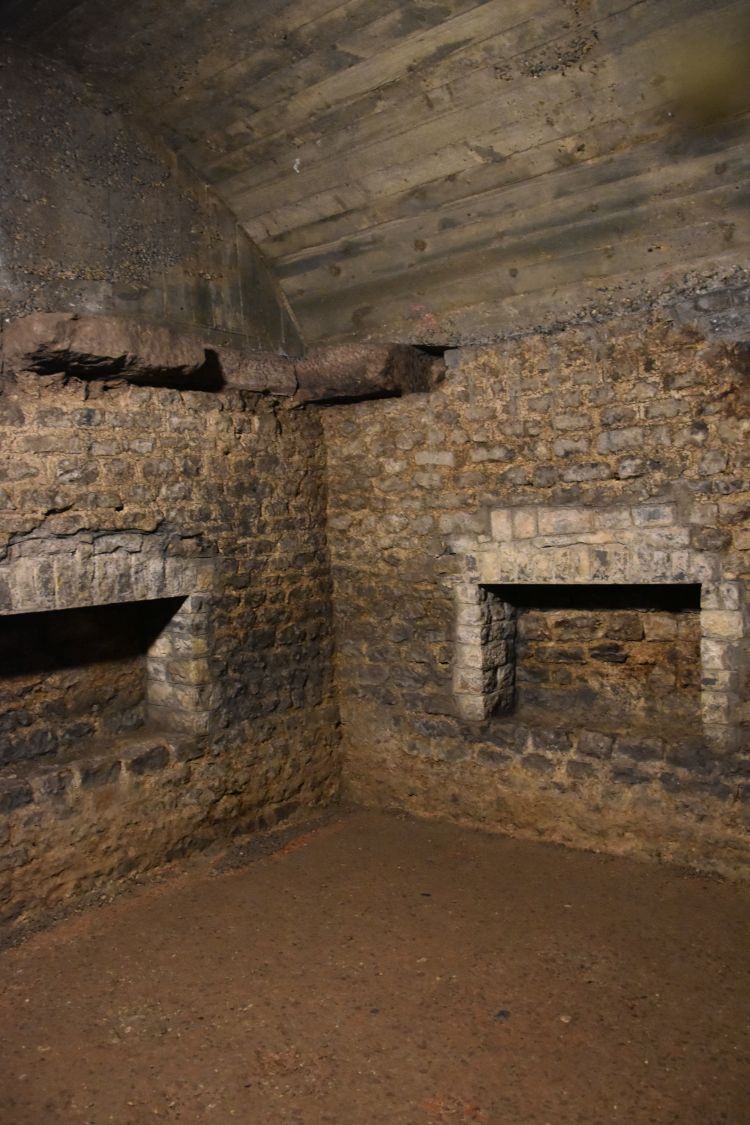 Not far from the water channel and the cellar, I reach the Roman history path. I enter through the gate… 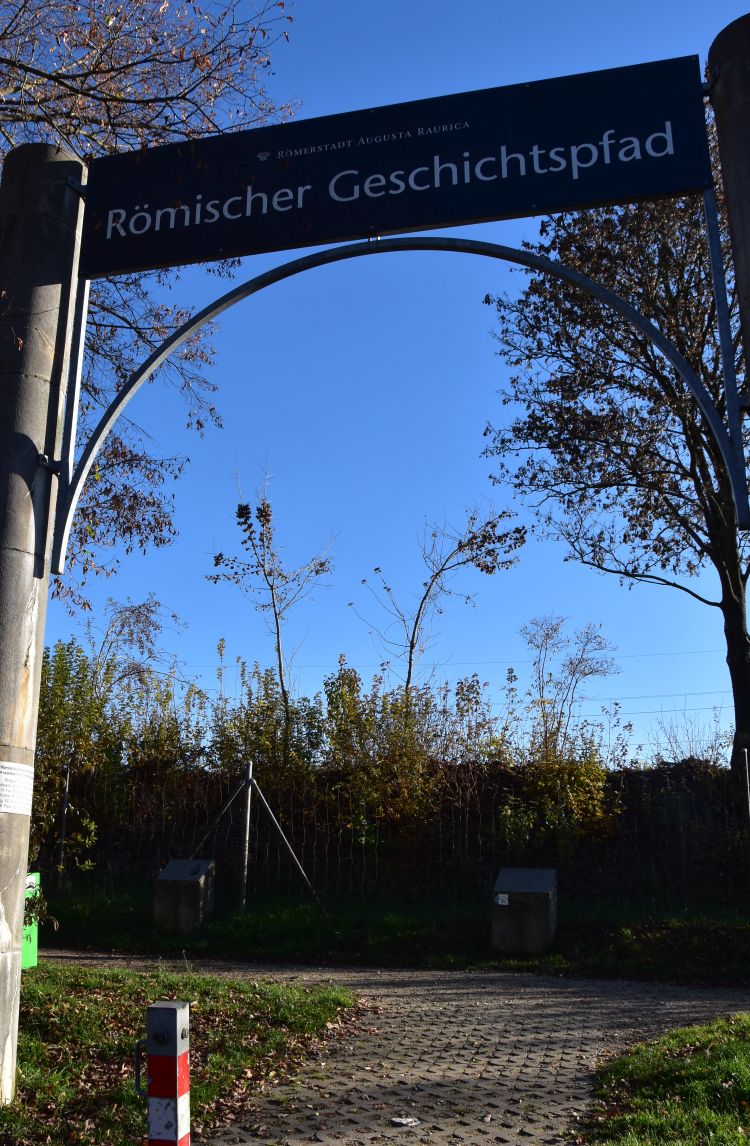 … and see a long, long path, lined with more than 30 panels laid out along a time line. The panels explain, how Augusta Raurica evolved as part of the Roman empire. 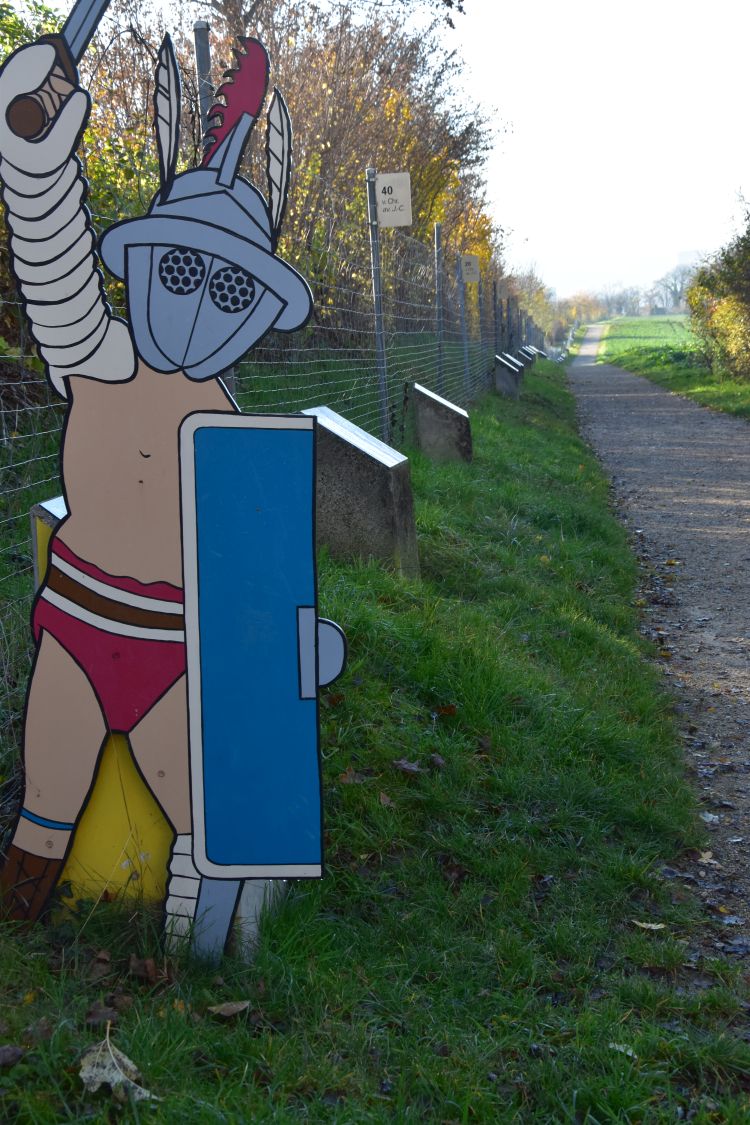 To study the panels will be the focus of another visit.

“New” amphitheatre outside of the city (12)

From the history path, it is not far to the amphitheatre that was built outside of the city centre of Augusta Raurica in the 2nd century AD. 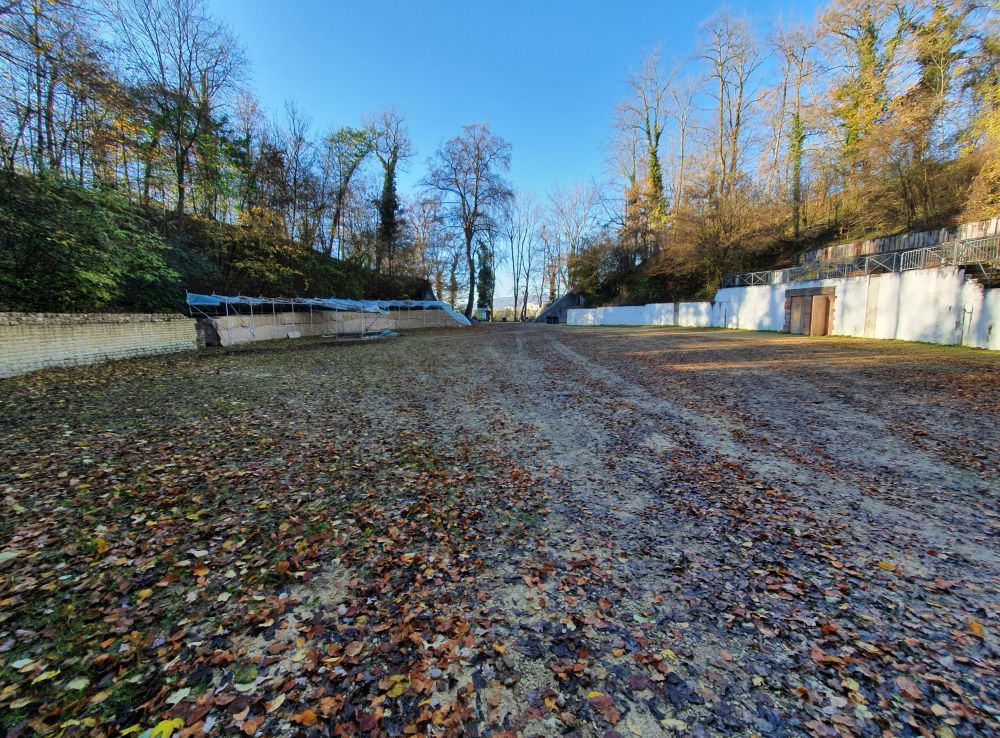 There is a picnic place here – the archaeologists think beyond archaeology. I do not know of many amphitheatres with picnic places – this is unique. I took this photo on a sunny November day; I liked to observe the families with kids enjoying their barbecued sausages amidst the ancient ruins. 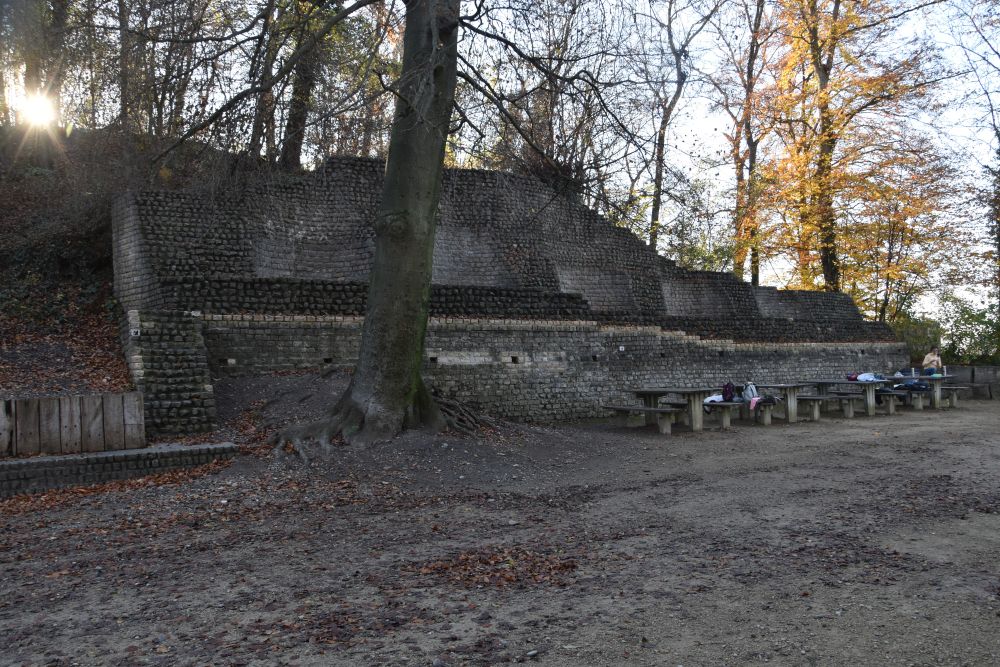 My last stop today is the “Temple Grienmatt”. Well, “Grienmatt” is not the Roman name. “Grienmatt” can be translated to “pebble meadow”, as “Grien” means “pebbles” in Swiss German. 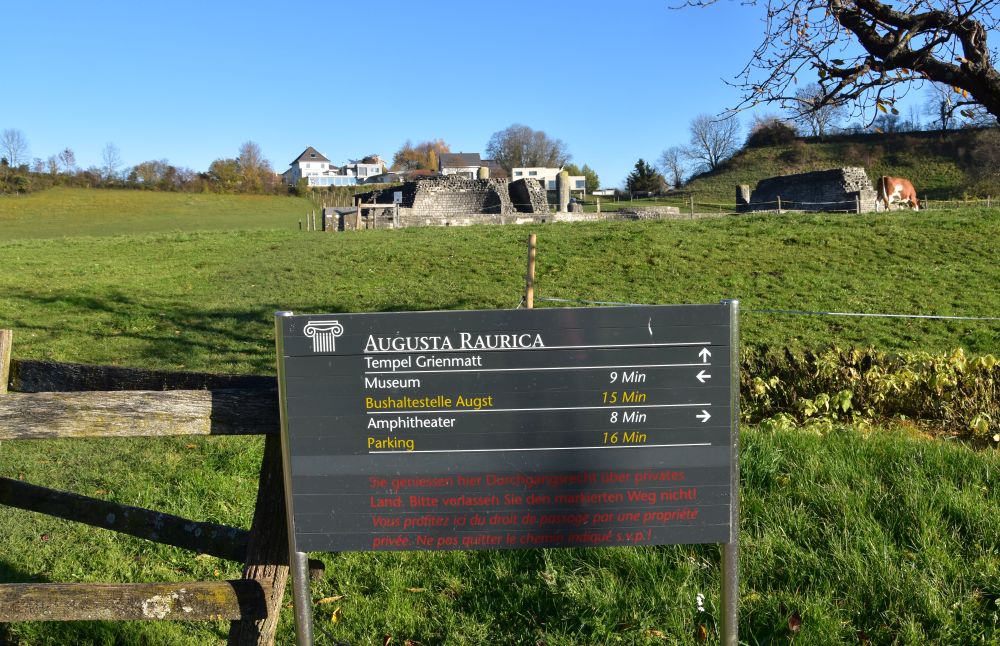 The panel says that it is difficult to interpret this temple. It seems that the cows do not notice, how reputable their environment is.

I now have looked at Augusta Raurica in five blogs:

I have to thank you, Lucius Munatius Plancus, for having founded Augusta Raurica (even, if it is not completely sure that you have founded it and even, if Roman warriors do not really wear pink leggings with golden laces, as presented in the city hall of Basel…). 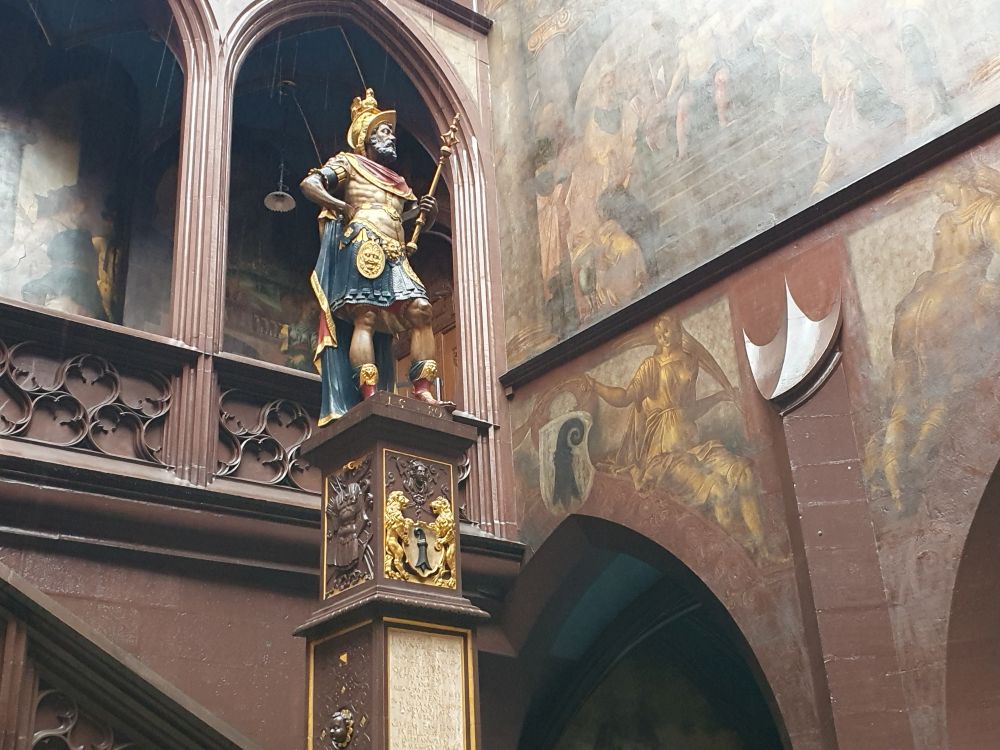 Furthermore I thank all the members working for the Augusta Raurica Foundation that have made the ancient ruins come to life, carefully preserving them, documenting them, making them accessible to visitors, and – making them fun for visitors by setting up picnic places and organizing events for families, for children and for all those that are interested in our Roman ancestors. Not to forget the guardians that care for the animals in the small animal park which is certainly a kids favourite.