Now in March/April 2020, the virus stopped me from being on the road. I am at home. After all, I am 65+ and I feel, this is required for solidarity.

My home tells me stories – I just have to listen: The furniture in my office is of my great grandfather – a teacher at the grammar school and the university of Basel. The dining table reminds me of my father’s mother – I called her “Omi”. All over are the paintings of my mother’s father – he was an artist and he made some beautiful portraits of his wife, my second grand-mother. There are woodcuts of my mother (being the daughter of an artist) and some souvenirs that she brought home from her journeys. The photo gallery in my guest room and the huge Schefflera plant allow me to travel to Africa with Ernst, my husband. And much more. My home is full of stories and I will now pick up some of them.

Let me start with the story that this Schefflera… 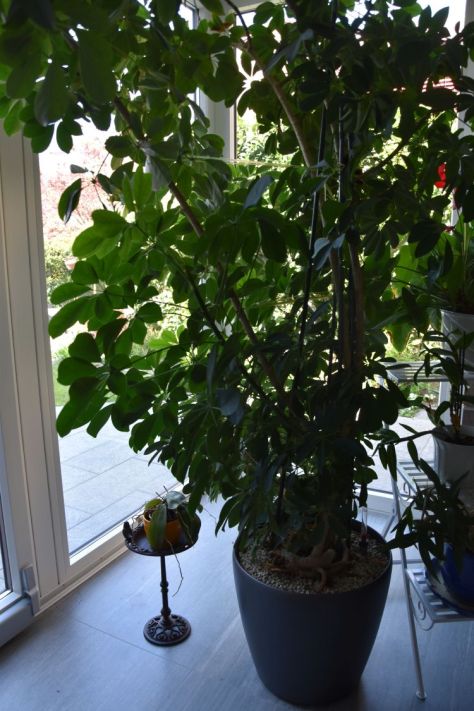 … with the small plush monkey has to tell us.

On March 6th 2006, the Schefflera (Fingeraralie) was my birthday gift for Ernst, my husband. The monkey was one of the plush animals that I had played with as a child. I gave the Schefflera with the plush monkey to Ernst as a souvenir of the ascent to the Kilimanjaro that we had just completed, in February 2006. We had seen Schefflera plants there and we had also observed mantled guereza monkeys (Mantelaffe) wearing a white “coat” and a white tail tuft; they are vivid animals jumping from branch to branch and difficult to capture.

My (much used) brown plush monkey is a very, very rough approximation of the guereza monkeys, and Ernst liked my idea.

Now that Ernst has become a star guarding over me, the Schefflera in my living room still reminds me of our Kilimanjaro adventures in Tanzania.

How the idea of the Kilimanjaro came up

Ernst’s best friend had already climbed the Kilimanjaro 30 years ago, when he was almost 30 years old. Now soon about to complete 60 years, he wanted to go back, and he invited his family and close friends to join him. Ernst asked me, what I would think of climbing the Kilimanjaro. I was all for it! This mountain had been a dream of mine, since having listened to the song of Jean-Claude Pascal, “les neiges du Kilimanjaro” (I was a teenager then).

Yes, we made it to the Uhuru peak of the Kilimanjaro – on the so-called Coca-Cola trail

Walking up “pole, pole” is the secret for reaching the top across the vegetation zones

We have booked our tour with Aktivferien AG that hires local guides, porters and cooks to take us up. The local guides permanently warn us to advance “pole, pole” which means “slowly, slowly” in Kisuaheli. We were the slowest of all the groups, already, when leaving Marangu at 1800m.

We walk through the tropical rain forest first… 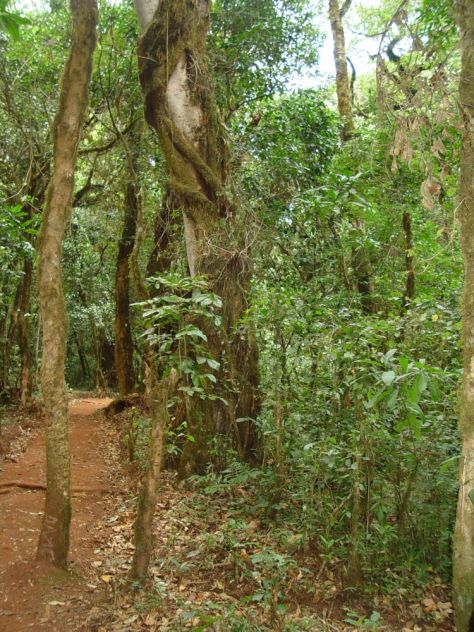 … and then reach the giant heather about half an hour before arriving at the Mandara hut. The  heather is covered by bearded lichen.

The heather plants are huge and I feel like Hänschen in the empire of the Blueberry Man – a book that I loved as a child (“Hänschen im Blaubeerenland”).

It is 900ms up from Marangu to the Manadara hut on 2700m (called after Mandara, a local chieftain in the late 19th century, known for being a tough warrior and for taking gifts from the early explorers of that time).

On the second day, we walk in the moorland above the tree level. Outstanding are Lobelia (deckenii) and Senecio (kilimanjaro or giant groundsel). This is the Senecio plant.

We reach the Horombo hut at 3650m altitude. This complex of huts was called “Petershütte” before, and yes, a distant ancestor of mine, Dr. Carl Peters, has founded the colony of Ostafrika/East Africa which is about Tansania today. I have mixed feelings about my ancestor, because I cannot not agree with his ruthless attitude towards the indigenous population.

We stay in the Horombo-Peters hut for two nights. To adapt to the altitude, we walk to the saddle separating the Kibo mountain from its “partner”, in the east, the Mawenzi, which is a volcano that is no longer active. Its name means “the dark mountain” in Kisuaheli.

We look at the path leading from the Kibo hut to the crater rim (Gillman’s point) which we will climb up in two days from now. 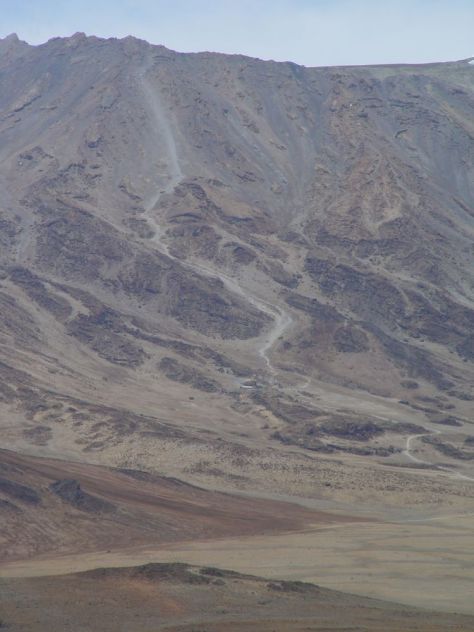 The way from the Horombo hut at 3650m to the Kibo hut at 4750m takes us through barren terrain and the water supply ends on the way. No water above this point. Our porters tank water here.

Our night in the Kibo hut is very short. We get up at eleven pm and at midnight, we start to walk up along the winded path to the crater rim, “pole, pole” – zig-zag, zig-zag, zig-zag – endlessly. At the beginning, we are overtaken by others, but then the other groups sit down more and more and we overtake them, pole – pole. The local guides take care of each of us, even carrying some of our rucksacks. They do a great job motivating us to continue. At 5200m we reach the Meyer’s cave, named after Hans Meyer who was the first to reach the top of the Kilimanjaro in 1889; he called the highest point after Emperor William II of Germany (it is now called Uhuru peak, uhuru=freedom). Hans Meyer picked a stone from the very top, brought it home to Germany and gave half of it to his emperor William II. The emperor integrated this stone in the decoration of Das Neue Palais in the Sansouci castle and park complex in Potsdam – here it is.

At about six o’clock, we have reached the crater rim, signposted “Gillman’s Point” (5685m). Less than 1000m ascent in six hours, this is my record in “slowness”. That WAS “pole, pole”. It is very cold. I use my red rain cape as a “tent” insulating me from the cold temperatures and warming me up. Then I hand the cape on. After a rest, we tackle the last 200m along the rim to the Uhuru peak, the highest point of the Kilimanjaro or Kibo.

At the top, we share the birthday cake – after all this ascent to the Kilimanjaro was the birthday wish of Ernst’s friend. It is around 8:30. About half an hour later, we start our descent. The idea is to get back to  “more human” altitudes as fast as possible. The couloir that we had zig-zagged up before is full of ash and we can glide down on it like on snow. From the Kibo hut, we continue our way down to the Horombo hut, where we stay overnight. The next day, we take an early start at six in the morning to walk down to Marangu, where we are invited to church in the early afternoon. Ernst sighed: “Nie han i so frie uffschtah miesse für z’Predigt z’go” – “Never have I had to get up so early to go to church.”

Marangu – Mandara hut – Horombo hut – Kibo hut – Uhuru peak – this was our route up to the Kilimanjaro, and because this seems to be the most comfortable route (with all the huts on the way), it is called Coca Cola trail. But – the altitude is nevertheless a challenge, and from the Kibo hut, we were the only group that made it to the top. The last ascent to the Uhuru peak IS demanding, also on this trail.

At the church – the safari service and the banquet

After having gotten up so early this morning to run down from the Horombo hut to Marangu, we make it in time to the church.

The church bell rings for us. The priest talks about the Israelites returning from Egypt to their homeland, just as we have safely returned from our tour (or safari) to the Kilimanjaro. After the service, we are invited to a delicious banquet with the highlight being a roasted goat. The Lutheran faith of the community shows that the Germans have evangelized Tanzania – the first missionary was Johannes Rebmann in the middle of the 19th century.

Good-bye guides, porters and cooks and good-bye Kilimanjaro, you are large mountain giving life, but also being a potential danger

After our descent, we say good-bye to the guides, the porters and the cooks that have cared for us. Together, we sing the Kilimanjaro song:

The people living around the Kilimanjaro are aware of the fact that this volcano is resting and could explode one day destroying all the life around it that now benefits from the fertile volcanic ground and the mountain as an obstacle in the landscape generating rain. It is very probable that a lava plug is lurking under the convexely shaped mountain.

On the next day, we drive to the Ngorongoro Crater. We look back to the Kilimanjaro with its white coat or “blanc manteau”, as Jean-Claude Pascal sung in the 1960-s. 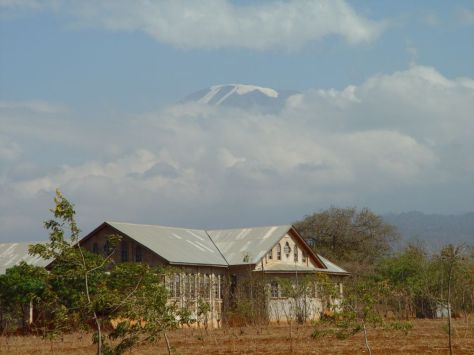 Now our wild-life safari adventure starts; we will see animals such as zebras, gnus, elefants, giraffes, lions, antilopes, warthogs, marabus and even a rhinoceros.

4 thoughts on “Listening to the stories that my home tells me: The Schefflera and the Kilimanjaro”