In September 2019, I spend a few days in Moscow, with some friends of mine. To round off, I will tell you about three more excursions in Moscow, to the Cheryomuschkinsky Rynok, around the Saviour Cathedral and to the Sparrow Mountains.

The Cheryomuschiknsky Rynok is a welcoming covered market located south of the Sparrow Mountains. While it is raining, we enter and stroll along the stands. There is everything from souvenirs to meat, cheese, fruit, vegetables, sweets, wine and restaurant… they have a wonderful website in Russian – look at the photos.

I love to read the Russian transcriptions of English or French words, because they represent phonetically, what we say, and the Russians did listen carefully, before writing down. They believe that the French and the English use far too many letters, sometimes inconsistently. I think that Russians have a point here. Let us look at a few examples.

Now we are at a meat stand. “Стейк”, spelled out “steik”, is “steak”. And we can buy several steaks: рибай (riba-y) is rib-eye, Нью-Йорк (Nyu-York) is New York; and Портерхаус (porter-kh-aus) is porterhouse (the Russian do not have the “h” and replace it by their “х” (“kh” like “Loch Ness” or “Buch“). 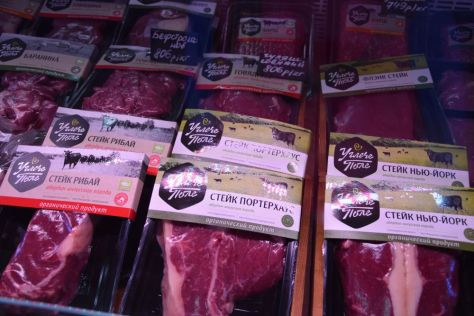 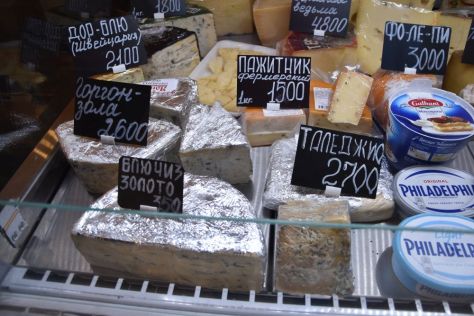 Russia also knows of the Swiss Müesli. Here you can buy “батончики мюсли” or “myusly bars”. Note that “Müsli” are “small mice” in Swiss German. What we Swiss eat is “Müesli” (small mush), not “Müsli” (small  mice). 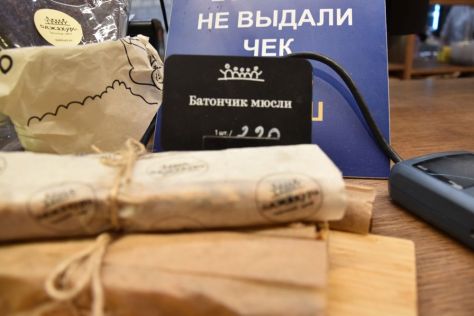 Around the Saviour Cathedral

Zurab Tsereteli (*1934) was the favorite artist of Juri Luzhkov , mayor of Moscow from 1992 to 2010. Some of Tsereteli’s projects in Moscow were the reconstruction of the Cathedral of Christ the Savior (1999) and…

… the 98m tall Peter the Great monument (1997), which seems somewhat odd to me with the sails that look a bit like hanging laundry. Peter the Great had learnt shipbuilding in the Netherlands and I am not sure, whether he would have installed such sails that may not really be useful for sailing. Actually rumors tell us that Tsereteli first called his monument Columbus and intended to give to the US. The US refused the gift. The rumors continue that then Tsereteli redefined his monument as “Peter the Great” with the intention to place it at Saint Petersburg. But they did not want the statue either. Finally Tsereteli’s Peter the Great found his place not far from the Savior Cathedral. 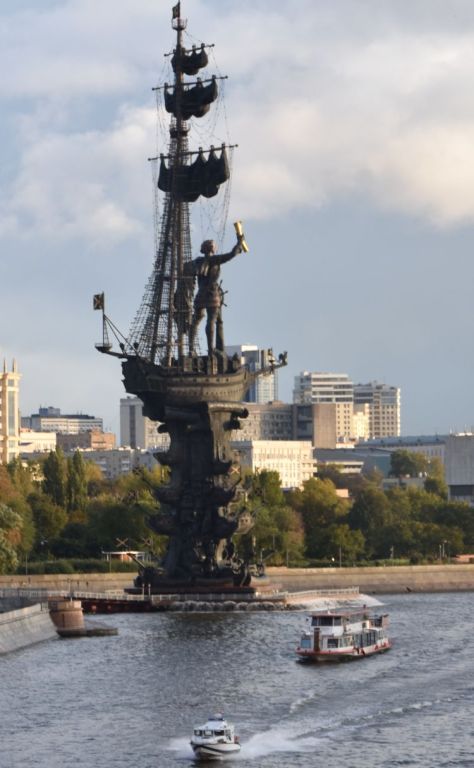 The “Sparrow Mountains”, formerly called “Lenin Mountains” – relaxing in the forest along the Moskva river

For some hours, the sun shines. We take the metro to the Sparrow Mountains that formerly were called Lenin Mountains. Through the autumn forest we walk up to the viewpoint to look at the skyline with the golden cupolas of the Novodevichy Monastery (Новодевичий Богородице-Смоленский женский монастырь) and with some of Stalin’s sisters (skyscrapers in socialist classicism or “Zuckerbäckerstil”) in the background.

In 2012, I zoomed the Novodevichy Monastery in… 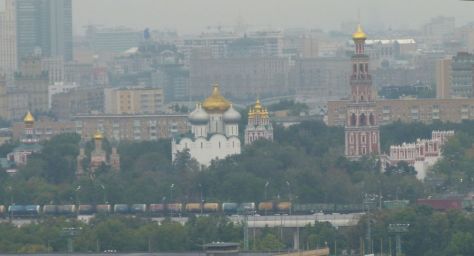 … and we then visited the monastery that was founded after Moscow had conquered Smolensk. In the center is the golden Cathedral of Smolensk (Смоленский Собор, 1525).

This is the Gate Church (Преображенская Церковь, 1688, Baroque style of Moscow – in Russian it is the Transfiguration church).

We walk down through the forest to the river Moskva. There would have been a cable car to bring us up and down. In the background we can see the modern Moscow city…

… now zoomed in. Moscow City (Москва-Сити) was started in 1992 to create a city in the city with high sky scraping buildings for half a million inhabitants, something like a Manhattan on the river Moskva. In the meantime, the city in the city has become a clearly visible landmark in the skyline of Moscow. 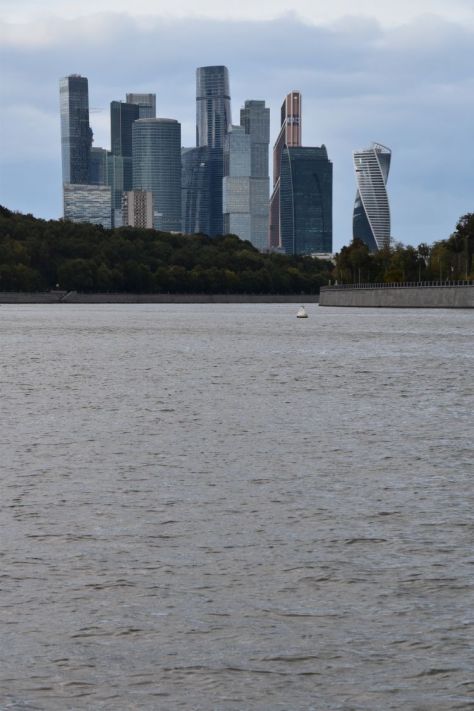 This was my third stay at Moscow, first in 2002 with Ernst, second in 2012 with a group traveling from Saint Petersburg to Moscow, much of it by bike, and, in 2019, it is my third time, now with three friends. We are on our way to Usbekistan, with a five day stop over in Moscow to explore the capital of Russia. I think of going again to visit more of this lively town. Now we look forward to discover Usbekistan.