When spending a few nights with friends in Moscow in September 2019, we visit the magnificent Trinity Lavra of St. Sergius. From the Jaroslawl station in Moscow, we take the express suburban train (Elektritschka or электричка) to Sergiyev Possad (70km, takes about an hour).

The artist welcomes us in Sergiyev Posad

From the train station at Sergiyev Posad it is a short foot walk to the Trinity Lavra of St. Sergius. On the way, we come across this artist who has painted the monastery, when there was some more blue sky. Now he has returned (though it is more cloudy) to complete his painting here and there. He tells us that he used to be a professional artist. He seems to be in his seventies. He loves his profession and his eyes express the wisdom and serenity of age.

We stop for a while chatting.

Then we take our own pictures – just photos: The golden cupola surrounded by the blue star dotted cupolas shines in the sun – this is the Maria Assumption/Dormition Cathedral.

To the left we see the Refectory with the rectangular “tower” that covers the refectory church. Behind the Refectory stands the Belfry – 88m high. The Holy Gate is the main entrance on the right hand side, under the green roof with the small golden cupola. 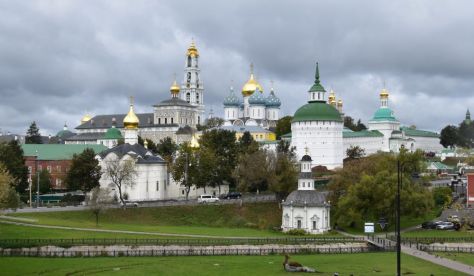 I remember, what Ernst said, when we had returned from Saint Petersburg to Moscow in 2002: “Now I do feel like some original Russian churches with cupolas, let us go and visit Sergiyev Posad.” I was happy, we took the suburban train and in the lavra, we hired a young lady as a tour guide. Now, 17 years later, Ernst accompanies me in my heart.

Alongside stands selling matryoshka dolls (матрёшки), we reach the Holy Gate and main entrance to the Sergius monastery, which is, my Dumont says, the most important monastery of Russia (p. 160).

Overview of the main sights in the Trinity Lavra of St. Sergius

Let me first give an overview of the main sights of the Trinity Lavra of St. Sergius (direction east to west).

The blue line shows the outline of the defensive wall surrounding the lavra, whereby the main gate is now at the bottom (on the photo above, it was on the right hand side). I have placed the main sights in the sequence they appear, but in reality, they do not fill the whole area surrounded by the wall, but only half of it. 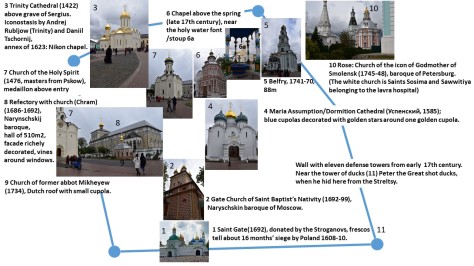 The buildings we see in the lavra are mainly from the 15th to the 18th century. They range from the specific Russian church building style of the 15th and 16th century (based on Byzantium, later with elements from Italian Renaissance, numbers 3,4,7) to Russian baroque, first (after 1600) the Naryschkin baroque from Moscow (2,6,8) and, after 1700, the baroque from Petersburg (5,9,10). (See below “some background information”).

Entering through the Gate Church of Saint Baptist’s Nativity

Right after the entry gate, we come across our first church, the Gate Church of Saint Baptist’s Nativity (2, 1692-99, Предтеченнский Храм, Naryschkin baroque of Moscow). Small golden cupolas dance on the rectangular building decorated with lively geometric patterns and slim columns.

Behind the Gate Church of Saint Baptist’s Nativity, the confusingly rich world of the lavra churches opens up.

Where the monastery began: Sergius and the Trinity Cathedral

The first church built from stone is the Trinity Cathedral (3, Троицкий Храм), erected in 1422 above the grave of Sergius, the founder of this lavra. White limestone and golden roofs – breathtaking elegance. There are three apsides. The facades are divided into three parts with swinging gables. Attached to the Cathedral is the small Nikon church, like a little brother (for more details about Sergius see below under “some more background information”).

The grave of Saint Sergius with his relics is where the pilgrims stand in line. The photo is from the book “siehe die Stadt, die leuchtet”, published in 1989. Inside, we encountered a line of pilgrims as well.

“Trinity” refers to the three angels visiting Abraham who serves them a meal (well, when they arrived, they looked like vagabonds. After Abraham had invited them, they turned out be angels). The trinity with Abraham and the three angels is a reoccurring representation in the Russian-Orthodox churches. The iconostasis of the Trinity Church holds the Trinity icon of Andrei Rublev – now as a copy. The original is in the Andrei Rublev museum of Moscow. I scanned Rublev’s Trinity from Hamel’s Dumont Kunstreiseführer about Russia (photos are not allowed inside the church).

The Assumption/Dormition Cathedral (4) makes up the center of the lavra churches and it is surrounded by the Holy Font with chapel and cover (6 and 6a), the Church of Holy Spirit (7), the Belfry (5) and the Church of the Icon of the Godmother of Smolensk (10).

The Holy Font with the cross is covered by playful columns (Сень над чашей с крестом). This is the newest construction in the monastery, 1873, on this photo contrasting with the oldest from 1422, the grand Trinity Church.

The covered Holy Font with its cross stands very close to the Assumption/Dormition Cathedral and there is a reason for that. It stands where the Cathedral first had the narthex.  This was the place, where believers once bought candles and filled in the intercessions, before entering the Cathedral. However, the narthex was destroyed during the siege by the Poles (1608-10). A spring was then detected here. It was said that the water of this spring healed a blind monk. Also in 2002, our young tour guide asserted to us that the holy water has healed many people. In the late 17th century, the tiny red-white chapel was built above the spring, and later, in 1873, the Holy Font was covered with the columns.

The Maria Assumption/Dormition Cathedral was built in 1535. The Russian name “Успенский Собор” alludes to “Maria Dormition” or to her passing away, but the translators often talk about “Maria Assumption”, because this is, what we in the west celebrate on August 15th.

To the right, the slim Church of Holy Spirit with its one blue cupola has been constructed earlier than the Dormition Cathedral, in 1476 (церковь Сошествия Святого Духа).

Both white churches (made from lime stone obtained near Moscow) show the Russian style: The Dormition Cathedral has the typical round gables (sakomars) and the Church of Holy Spirit has the Kokoshniki reminding of the traditional Russian headdress of women (the swinging gables of the Trinity Cathedral are similar).

And yes, this cat lives in the lavra, too. May be it has heard a mouse under the ground.

The Tsar Boris Godunow (1598-1605) has been buried near the Dormition Cathedral. The family grave of the Godunows looks like a little house (to the left of the entry door).

The lavra is full of cupolas and you can play with them… these are the cupolas of the Dormition Cathedral and of the Church of Holy Spirit, seen from the Refectory; they appear behind the golden-brown cupola of the small Mikheyev Church. 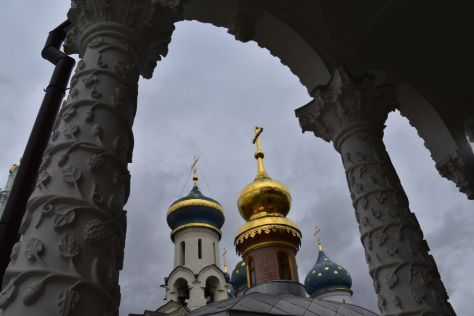 Also near the covered Holy Font (and  hence close to the Dormition Cathedral) is the Belfry from 1770 (Колокольная). Its blue and white decoration reminds me of some baroque churches in Saint Petersburg.

Now, I zoom in the small and finely decorated сhapel above the holy spring (Успенский кладезь с часовней), just in front of the Dormition Cathedral. The chapel from the late 17th century shows the playful Naryschkin baroque of Moscow. The finely carved slim white columns on red ground give it some airiness. The tower is decorated with the geometric patterns that we have already found at the Gate Church of Saint Baptist’s Nativity.

I very much like the graceful white Church of the Holy Spirit, made by skillful masters from Pskow. Clustered pilasters divide the facades into three parts topped by the headdress like “Kokoshniki”. In 2002, the tour guide told us that the small tower with the blue cupola is a belfry that can only be reached from outside via a ladder; it is rare that Russian churches have an integrated belfry. Usually the belfry stands separate.

In the background appears the Refectory with the small Mikheyev Chapel attached.

The medaillon showing Christ decorates the facade above the entry door to the Church of Holy Spirit.

The Refectory (1686-92, Трапезная) shows beautiful Naryschkin baroque of Moscow.  Its geometrical pattern reminds us again of the Gate Church of Saint Baptist’s Nativity. The “tower” hides the Sergius cathedral (храм), which to me seems to be very, very luxurious. 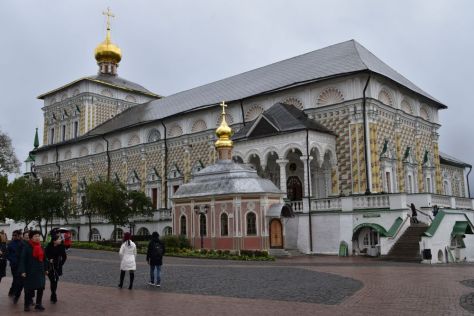 Just close to the Refectory is the elegant small Mikheyev church (1734). Mikheyev was a former abbot. 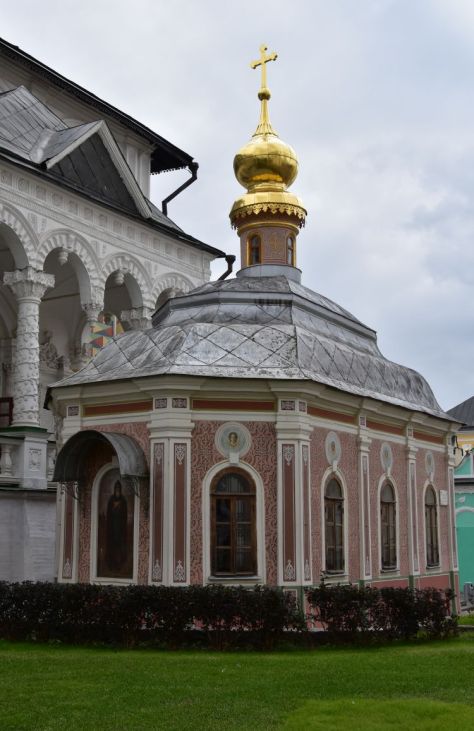 Behind the Belfry is the red church of the Godmother of Smolensk (1745-48, baroque of Saint Petersburg). It looks like the hermitage of a landscape garden.

The white tower belongs to the hospital chuch of Saints Zosimas and Sawwitiya (1635-38).

The abundance of impressions makes us hungry. We eat in the small canteen next to the golden entry gate. We have fish soup (ukha, уха), Russian ravioli (Pelmeni, пельмени) and herring under the fur coat (yes – it is called like that: селёдка под шубой. This is herring “under” a cover of beetroot salad). 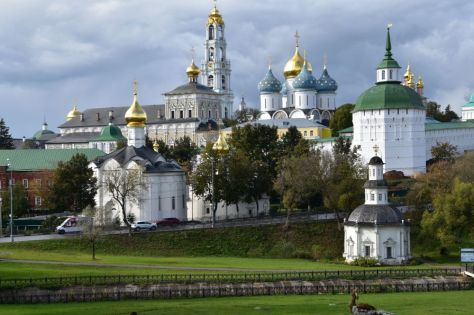 We say good-bye to this magnificent monastery ensemble. I am happy to have seen it a second time now, and, after having studied it at home using all my sources available, I would not mind seeing it a third time.

The Trinity lavra started off in 1340, when Saint Sergius of Radonesch (Сергий Радонежский) retreated to the forest north of his home town Radonesch to live as an ascetic hermit. More hermits joined him and Sergius built the first wooden church (according to the young tour guide that we had hired in 2002, he was a carpenter and hence built the church himself. He even knew the moment of his death six months ahead and timbered his own coffin, she said, and later pilgrims took splinters from the coffin such that it had to be protected under glass. Sergius is a much venerated person decorated with legends).

The support of Sergius was important for getting rid of the Tartar yoke. Sergius blessed Prince Dmitry Donskoj of Moscow before the battle against the Mongolian Golden Horde near the Don river in 1380. Donskoj defeated the Mongols, and this first victory counts as having set off the liberation of Russia.  As a matter of fact, the Mongolian Golden Horde was under pressure, challenged by Timur (1336-1405) , also with a Mongolian background (we will soon meet Timur in Usbekistan). Perhaps Sergius was a bit similar to Niklaus von der Flüe of the 15th century who also had political influence on the first cantons of early Switzerland.

The monastery flourished and became wealthy, as they were always on the winning side of politics.

For my understanding I divide the main sights of the Trinity Lavra into three phases:

There are only two monasteries in Russia that are called Lavras. Empress Elizabeth (a successor of Peter I the Great) edited a decree to elevate the Sergius monastery to the Trinity Lavra of St. Sergius. The second Lavra is dedicated to Alexander Newsky in Saint Petersburg.

Since the 15th century, the monastery with the grave of Sergius has been an important pilgrimage site. The pilgrims needed catering and wanted to buy souvenirs, such as icons and wooden toys. A small town emerged around the lavra. Today, Sergiyev Posad is THE Center for the production of matryoshka dolls – and, as a matter of fact, many of them are on sale on the street leading to the entry gate of the Trinity Lavra.