In June 2017, it is again a rainy day in Saint Petersburg. Rainy days ARE rainy here, indeed. It is as if the clouds opened some “gates” to pour water onto the streets. Walking above the ground is an extremely wet experience then. Sightseeing UNDER the ground is an alternative. The metro of Saint Petersburg is great for that, above all the red metro line 1 inaugurated in 1955. Here we are at Pushkinskaya – each station displays the route of the metroline. 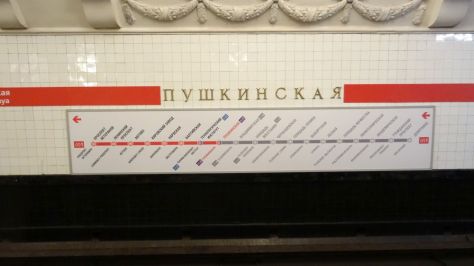 There are five lines and changing is possible at seven “multi-station” stops where stations are connected by tunnels – each station has its own name. Six are double station metro stops, and under Sennaya Ploshchad there are three interconnected stations that are called Sennaya Ploshchad, Sadovaya and Spasskaya (metro lines M1, M2 and M5). It can take quite some time to walk under the ground to change between stations.

The two anchors of Petersburg decorate the trains. 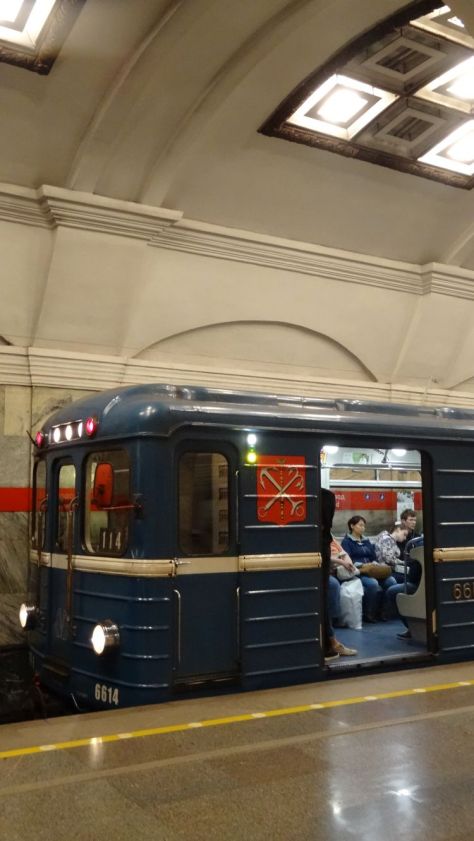 We move from station to station on line number 1 to see the underground palaces built for the people. This is Baltiyskaya (Бальтийская). 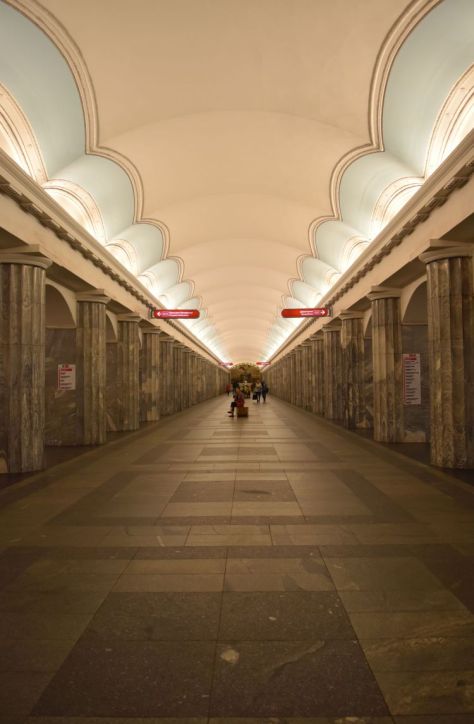 Pushkin, the great Russian poet, welcomes us at Puschkinskaya (Пушкинская). 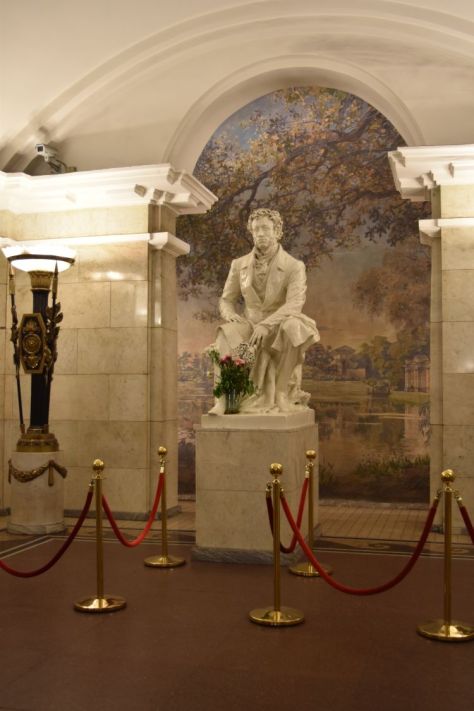 Narwskaya (Нарвская) with its heros of work is a socialistic experience reminding me of Ploshchad Revolutsii in Moscow. 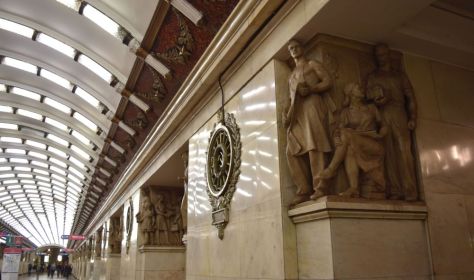 This is the station Kirovsky Savod (Кировский Завод). Kirov headed the communist party in Leningrad. He was murdered in 19434 – some blame Stalin for that, as he might have feared that Kirov became too powerful. 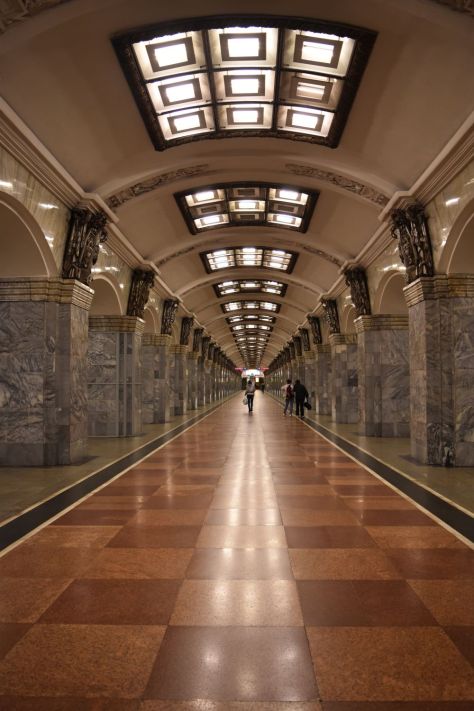 Lenin stands at the end of the Kirovskaya station.

Avtovo (Автово)  is our last station on metro line 1. The columns are very carefully designed…. 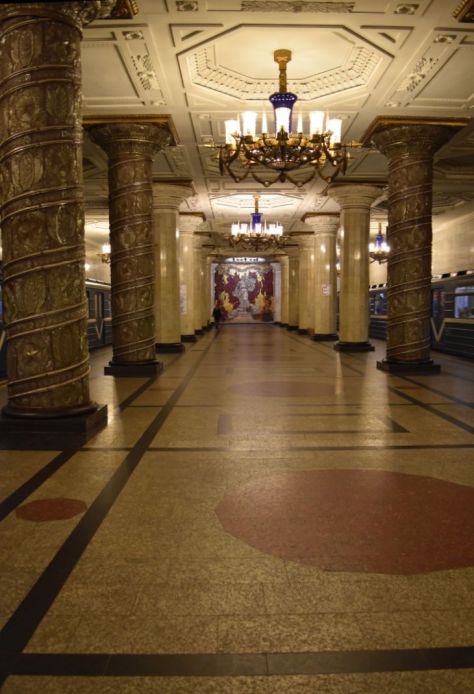 … and some of them are covered using glass.

The mosaic here says “peace for the world”. In Russian this can be said very shortly: “миру мир” (literally “for the world (we wish) peace”), as “мир” (“mir”) means both “world” and “peace”.

At Pushkinskaya we change to the connected station Svenigorodskaya (Звенигородская) to continue with the purple metro line 5. Here we find Peter the Great. 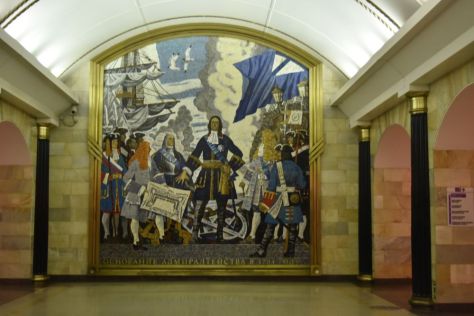 At Admiralteyskaya (Адмиралтейская) we leave the metro. Neptun says good-bye to us. 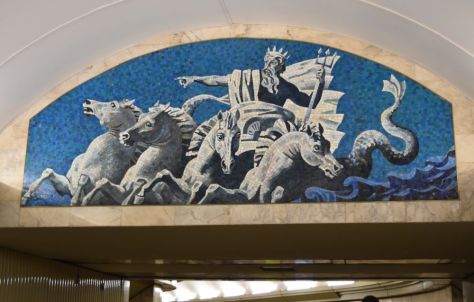 We tackle the long-long escalator of Admiralteyskaya. This station is 86 meters under the ground. The metro of Sankt Petersburg had to be dug deep into the ground because of the swamps – and Admiralteyskaya is its deepest metro station.

While riding on these long-long escalators I like to watch the people – reading a book, chatting, kissing, combing their hair, wiping on the smartphone, searching for something in their bags or simply dreaming. Few people rush, as the metro comes every three minutes anyway. The few who do so jump down along the escalators; sportive people running upwards are very rare.

Above the ground the heavy Petersburgian rain welcomes us. We immediately look for shelter and enter the nearest restaurant – Bonch at Bolshaya Morskaya. Oh yes, high heels are not very practical, when it is pouring with rain. Ursula has taken a photo of these design shoes that need to dry, whereby mine – a more sporty style made from Goretex – are  still dry…

Yes, the metro in Saint Petersburg is not only very practical to move around in town, but it makes also a sightseeing object on its own right at the cost of one metro ticket, about 40 Rubles.