It is one of those winter days in January when I am happy to live in Basel, because the sun shines here, while the plateau of Switzerland including Zurich is covered with clouds. It is a sunny, but very, very cold day today. The fields on the Bruderholz are “dressed up” for winter.

I start my winter hike here.

The small nature reserve lakes are frozen and covered with snow that are decorated by animal tracks. 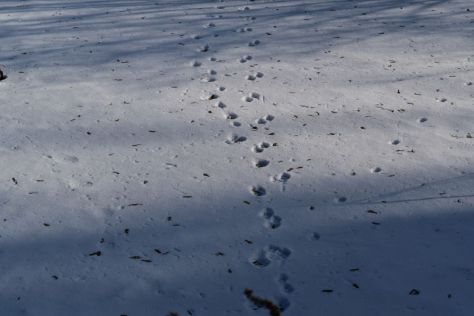 The bench looks inviting, but a little cold.

I approach Therwil and capture the view of the Blauen mountain range and the border with France in the haze (looking west).

I have crossed Therwil and look south across the vineyards of Therwil.

In Therwil, I am on the ground of the former Prince- Bishopric of Basel. Then I approach the border of protestant Biel-Benken that has belonged to the city of Basel. The border between Biel-Benken and Therwil/Oberwil has been carefully marked by boundary stones. This is the first boundary stone I come across – I call it  “corner stone”.

Next to the stone, this panel explains the history.

The border between Therwil/Oberwil and Biel-Benken was a major frontier in history. In the beginning of 16th century, Basel acquired areas from the impoverishing noblemen, one of these areas being Biel-Benken. Also at that time, Basel joined Switzerland and became protestant. The bishop of Basel had to leave “his town”; he moved to Pruntrut and continued to belong to Germany and the German emperor. The possessions of the bishop were called “the Prince-Bishopric of Basel”. The bishop owned Therwil and Oberwil that were located between Biel-Benken and Basel. Biel-Benken – belonging to Basel – was an exclave.  Around 1800 the Prince-Bishopric was dissolved and in 1815, the Congress of Vienna allocated Therwil and Oberwil to Basel (see also André Salvisberg u.a.: “Historischer Atlas der Region Basel”, Christoph Merian Verlag 2010). The once important border separating two countries (Germany and Switzerland) became a border separating just communities.

The (historical) border around Biel-Benken is adorned with boundary stones from the 17th and 18th century marking the frontier between Basel and the Prince-Bishopric of Basel. I look for the stones in the forest above Biel-Benken.

This stone from 1774 has been beautifully restored. It shows the coat of arms of the prince-bishop Simon Nikolaus de Monjoie pointing to the Prince-Bishopric side.

This boundary stone shows the bishop’s crook and a coq on the side pointing to the Prince-Bishopric. This must be the coat of arms of Christoph Blarer that the panel near the “corner stone” mentions. 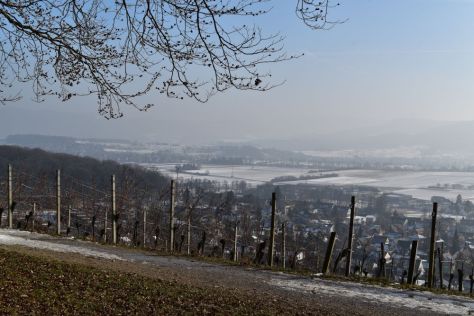 The pond near the monument of Oser is covered with ice and the sun plays with the trees. 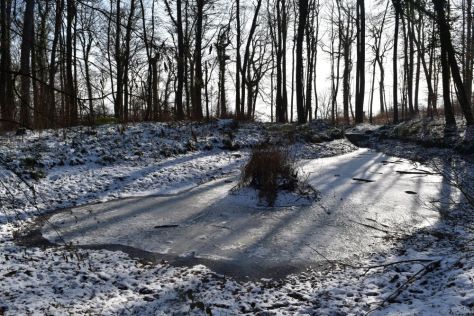 With many history lessons learned I return home to warm myself up – it WAS cold today, though the sun had made my heart jump.

I think I will return to Biel-Benken to search for more boundary stones, but perhaps I will wait for warmer weather…