Again to recapitulate: The architecture time line of Florence

The former blog started wîth our visiting Proto-Renaisance and Gohic churches. Let me now continue with some more Gothic churches of Florence.

A Gothic church for Maria and Renaissance sculptures ordered by the guilds: Orsanmichele

Orsanmichele was built around 1340. The oratorium or church is gothic, with harmonious blue ogives.

Center piece is Maria with the child painted by Bernardo Daddi  and sitting in the tabernacle shaped by Oracagna. 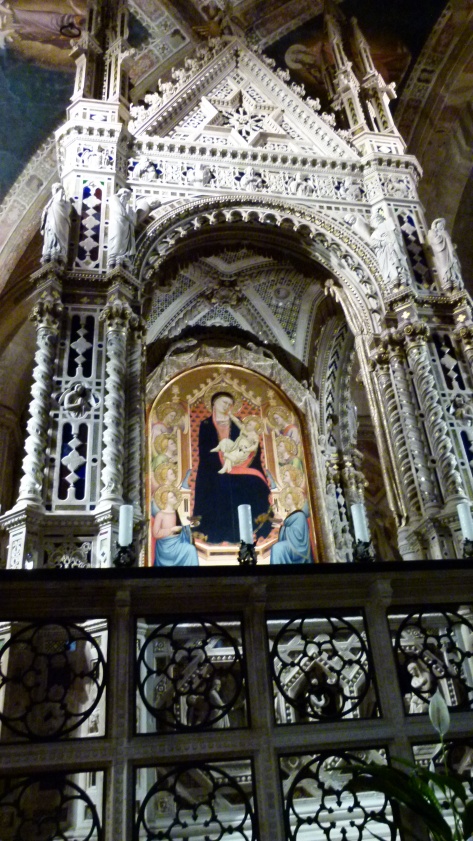 There was a market here before. A Maria painting was adorning the market and it was said to have performed miracles. Daddi’s Maria replaced the original and the church was built for it. Above the church were grain stores.

Orsanmichele belonged to the guilds of Florence. The guilds ordered statues for the niches around their building. The originals are now in the museum above the church (where the guilds had stored their grain before). Here is one example: St. John the Baptist by Ghiberti. I now start to recognize St. John, as he always carries this stick with him. There are 14 statues by Ghiberti, Donatello, Nanni di Banco and others, all from the 15th century – pure elegant Renaissance. 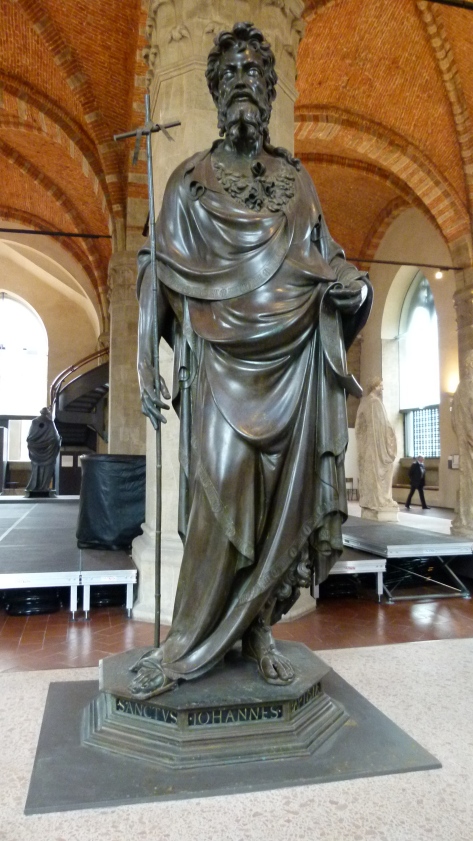 Transition between Gothic and Renaissance: The Brancacci Chapel

While strolling through Oltrarno on our first day in Florence, Leni and I come across the church Santa Maria del Carmine that is currently closed. A group of students from the Alsace are buying tickets for the attached Brancacci Chapel and we join them. THIS chapel is THE treasure of Santa Maria del Carmine. We sit between the students that start to copy the frescos on paper. The master piece is Massaccio’s “Expulsion from the Paradise” that marks the transition from Gothic to Renaissance painting. The angel directs Adam and Eva to leave the paradise and the distress can be seen on their faces – it is a shock for them. Massaccio is the artist that also painted the “Crucification” in Santa Maria Novella and that died at the age of 27.

Opposed to that is the fresco of Masolino showing the “Tempation”. It is still clearly Gothic – Adam and Eva are far less natural than in Massaccios fresco.

These two frescos made a great impression on me. Never before had I seen so clearly the difference between Gothic and Renaissance painting.

It was Lippi who completed the gorgeous fresco cycle of this chapel. Our Dumont has a detailed legend of all stories. Interesting is the scene of tax paying: Christ asks Petrus to catch a fish who will carry a double drachme in his mouth, and Christ is right. Petrus catches the fish and they pay the double drachme needed.

Fra Angelico was both a Domincan monk and an artist. Around 1440 he adorned the cells of his brethren with frescos that tell the story of Jesus. He adorned more than forty cells.

The “Annunciation” welcomes us at the entrance.

From the 40 plus frescos I select just two. The first shows faithful people leaving the limbo towards Christ – while he devil is locked under the door to his hell, unable to move – I like the humor in this fresco. 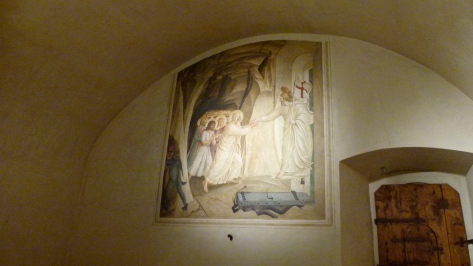 The second is an scene rarely painted: “the Mocking of Christ”. Fra Angelico symbolizes the mockers by painting a head with a speech balloon shouting at Christ.

I remember such speech balloons from Mayan drawings and I am impressed that very different cultures use similar symbols to represent speech.

The first Renaissance church and the first oeuvre by Brunelleschi: San Lorenzo – extended later by the Baroque Medici Chapel

San Lorenzo is a clear landmark in the silhouette of Florence: The cupola of the Medici Chapel can be seen from far – the San Lorenzo church looks almost small next to it. San Lorenzo is the first Renaissance church in town and is based on the architetural principles of the former churches from Proto-Renaissance and Gothic, in particular the shape of a Basilica with 3 naves. 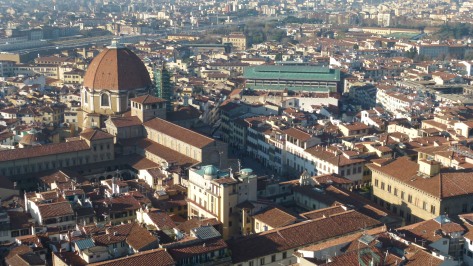 “Mother and child” is an incompleted sculpture by Michelangelo that stands at the backwall of the New Sacristy.

The baroque Chapel has been built for the Medici in the 17th century, when they had become dukes. The Medici Chapel shows, how rich they are – the decoration is almost too much for me with all the marble tiles and precious inlays in pietra dura.

I like this ceremonial ribbon with silk embroideries that shows the family emblem of the Medici.

South of the Arno is the second Renaissance church that Brunelleschi has built. Inside are again three naves adorned with white plaster and pietra serena (or grey sandstone). They give harmony to the church. The Dumont complains that there is a Baroque altar in the middle interrupting the clear lines of the nave.

With Santo Spirito I end our virtual walk through the churches of Florence. The target of us three Swiss – Ursula, Leni and Petra – will next be museums and palaces.