Discovering treasures, while being forced to just walk around Basel

Now that I can drive again (being so happy about this), I sometimes park my car below the Schartenfluh to take pictures and get more acquainted with the middle part of the Gempen plateau. In this blog I am talking about the Schartenfluh (another “rock”), the border path (Grenzweg) between Arlesheim and Dornach behind the Goetheanum, the dome of Arlesheim and the vineyards “Schlossberg” and “Steinbruch”.

The Schartenfluh (sometimes called “Gempenstollen” or “Gempenfluh”) is the rocky landmark topping the Gempenplateau that can be seen from far – here is a picture taken from the fortification of Dorneck.

The view from the Schartenfluh is superb and goes across the trinational area of Basel with the Jura, the Black Forest in Germany and the Vosges in France. When the weather is clear, you can even see the white Finsteraarhorn in the Bernese Alps. This selection shows the view of the Blauen, the Bruderholz and the suburbs of Aesch and Reinach stretching along the Birs. 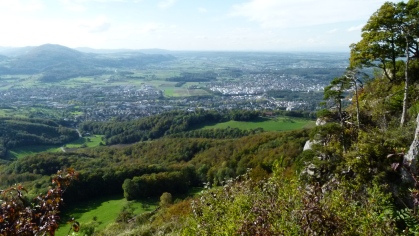 A tower invites to get an even better overview of the trinational area around Basel.

Climbing this tower requires to be free from giddiness.

The dome of Arlesheim

The roman-catholic church of Arlesheim is called “dome” indicating that it once has been much more important than a mere “church”: Correct. The dome and the related buildings have been built around 1700 to become the new noble residence for the cathedral chapter (Domkapitel) of the Prince-Bishopric of Basel (Fürstbistum Basel). The Fürstbistum Basel were the secular possessions of the bishop of Basel who resided in Pruntrut (he had to leave Basel during the reformation in the 1520’s). The cathedral chapter is the noble committee of the bishop. The Fürstbistum Basel was dissolved in 1792 (Napoleon) and the former dome became the roman-catholic church of Arlesheim (sources: Home Site of Dornach  and for the Fürstbistum Basel: Wikipedia and “Historischer Atlas der Region Basel” edited by the Christoph Merian Stiftung, 2010). 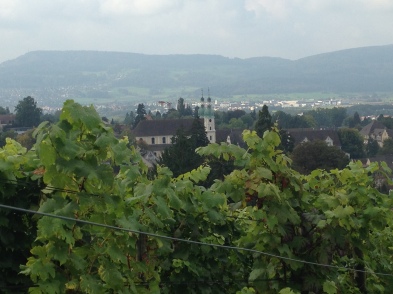 There are two vineyards in Arlesheim: The Schlossberg (“castle slope”) and the Steinbruch (“quarry”) (see Weinbau im Birseck). The mild climate of Arlesheim has always been favorable for growing wine.  Both vineyards are steep and looking south to capture as much sun as possible.  The noble committee of the bishop loved the wine of Arlesheim. Perhaps this is why they had their dome built here?

Sometimes Frischluft organizes visits to the vineyards. They praise the wine of the traditional winegrower, Erich Rediger. Quergut has recently been founded by two new and innovative winegrowers, the couple Huber/Bühlmann and Thomas Löliger. End of September they invited guests to their Schlossberg vineyard. I went and found myself amidst a group of teachers and artists – Michael Huber is a part time teacher at the Gymnasium Oberwil and a part time musician. His father has already grown wine here at the Schlossberg. Michael now follows in the steps of his father. In addition to Pinot Noir he has recently planted Shiraz and Cabernet Jura (the latter for blending, Michael tells me). The white grapes are Sauvignon Blanc (Michael says, the global warming makes it possible here) , Cabernet Blanc (a new breed of grapes) and Pinot Gris (in German: Ruländer or Grauburgunder). In the scorching sun I enjoy a sparkling Schlossberg Suuser (fresh wine) with a delicious pumpkin soup and later a fruity glass of Pinot Noir from the Schlossberg.

These are vines in the Steinbruch or quarry.

Grenzweg behind the Goetheanum (border trail)

My friends from Austria stopped once in the restaurant Schlosshof close to the ruin Dorneck. From here, a steep and romantic trail is following the border between the two suburbs Arlesheim (belongs to the canton of Rural Basel) and Dornach (part of the canton Solothurn). The border stones are the proof that there is a border here. 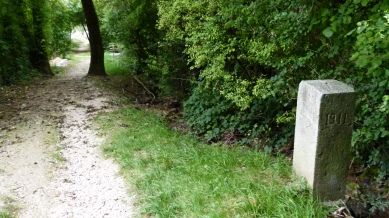 The Grenzweg is a quiet path along a creek. Bridges lead to the gardens of noble houses. Also birds are invited to live and breed here.

… with its heating house (Heizhaus)…

… and with its glass house (Glashaus).

The name “Goetheanum” is derived from the German poet Goethe. Based on admiring Goethe for his Spiritual Science, Rudolf Steiner founded the Anthroposophical movement in the beginning of the 20th century. He made the Goetheanum their world center. The first Goetheanum was built in 1908. It was a harmonious wooden building  avoiding right angles – like most anthroposophical houses do here in Dornach. The first Goetheanum was destroyed by arson in 1922. My gran-ma lived in  Basel then and told me that the fire could be seen from far. She was sad, because she found the wooden Goetheanum was beautiful. For the second version of the Goetheanum, Rudolf Steiner selected concrete. Again avoiding right angles the second Goetheanum was completed in 1928.

(see wikipedia and the Goetheanum homesite )

So many gems around Basel…

… to my opinion it is just a pity that the reunification of the two half cantons of Basel has been denied in September 2014. Before the voting weekend end, there were many posters in Rural Basel (or “Baselbiet”) proposing “no – we remain independent”. A frustrated citizen from Basel Town may have added the remark: “We also do not want you, farmers” (Mir wänn euch Buure au nid”). 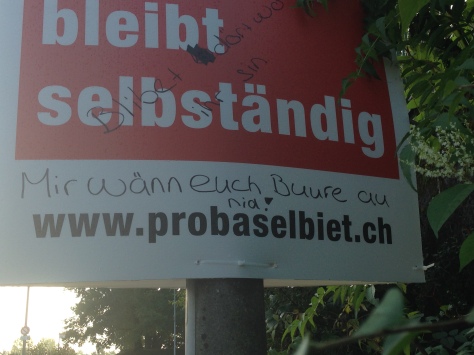 This makes me a little sad, as I have always loved both Basel Town and Rural Basel – and this year I was happy to benefit from the hiking options in front of my house door – in both half cantons.

3 thoughts on “On the road – discovering so much around Basel: To the southeast (V)”