No, I do not feel like visiting Podgórze. Because this is the place where too much happened seventy years ago. I know that in Podgórze, Schindler composed his famous list and saved the lives of some lucky. I know that the concentration camp was here that became the scene of Spielberg’s film “Schindler’s list”. I saw that film some years ago, and then could not sleep for several nights. I had also visited the Schindler factory with the team a year ago, which made me also suffer. No, I do not feel like visiting Podgórze.

But then I am taught better

But then, Piotr tells me that this area of the town is his favorite. On Sunday, Radek and Agata take me to Podgórze, after an excellent meal and wine in Kazimierz, in the Bottiglieria 1881. 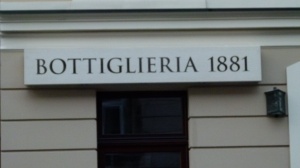 After the meal, we cross the Wisla to Podgórze using the footbridge full of locks symbolizing the marriages of hundreds of Krakówians – if only my lock would hang here as well… and I wish that you will mount your locks at some point in time.

Next we step up the stairs with all the philosophical thoughts – written in Polish. Agata and Radek translate for me…  I like the thoughts and forget the statements again.

My guide book proposes a walk through Podgórze to the tomb of Krak and to the stone quarry with the site of Plaszów (my guidebook: Krakau, Michael Müller Verlag, 2011).

From the Rynek I walk uphill taking a foto of two elegant houses (though one of them would need some renovation – the Willa Mira with its wooden decoration).

Next, I find the Benedykt church and another fort built by the Austrians, when Galicia belonged to them (I had also come across an Austrian fort in Zwierzyniec). 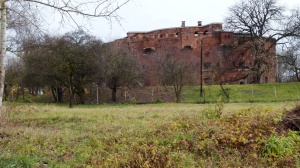 And in front of me is my next target, the tomb of Krak (Kopiec Krakusa). Krak was the first king of Poland. He also made Kraków his capital.

A street with heavy traffic separates me from the tomb. I oscillate a bit to find this footbridge.

And now I understand, what “silva rerum” stands for… it is a wall with graffiti describing the history of Kraków from Krak and his smok to pope Johannes-Paul II. It can be seen from the footbridge. 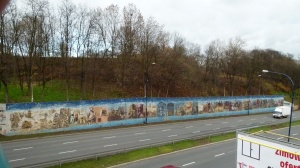 And yes, the pope belongs to the history of Kraków. He was a courageous priest here, before going to Rome.

The path is wet and dirty leading up to the tomb of Krak. Here I have a view of the city center of Kraków.

Through the mud I continue my way to the cemetary and the stone quarry Liban with the strange engine that also appears in the film.

I enter the space of the former concentration camp…. and almost get lost in an open space. There is not much left of the camp, but being here made me sense that the prisoners could turn up behind the trees and bushes.

I return back to Krak’s tomb and then to the Rynek of Podgórze. Now I know, why Podgórze is called “Pod-Górze”. It lies at the foot of a hill and grows along its slopes.

In the sweet little restaurant Makaroniarna, I have some delicious spaghetti and a fresh mint tea to warm me up.

On Plac Bohaterow, I find the pharmacy “Pod Orlem”. Today it is not as welcoming as it was for the Jews of the ghetto seventy years ago. To visit the museum, reservation has to be made three days ahead (even, when already here).

I like the monument of the chairs spread over the open square and also along the tram station, inviting people to sit down, while waiting. 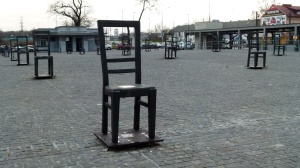 The main entrance to the ghetto was here… and these chairs now invite to sit down, reflect and link up with the past and with this charming area of Kraków.

Slowly I walk back to the city center. I climb up to the Wawel castle and take a picture of the tomb of Tadeusz Kosciuszko that I had visited some days ago in the thickest fog. Hence I would have been able to see the Wawel from there… 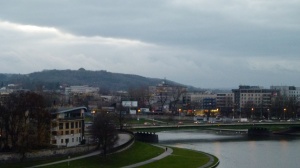 It needs a lot of phantasy to imagine what the Wawel looked like before it has been destroyed. I keep great memories of having visited the cathedral with Bibi a year ago.

Now I walk to the Main Rynek to say good-bye and get ready to flying home. It was a great time in Kraków. I am very happy to have met friends… a great thank you for everything.