In August 2020, I spend four days in Upper Bavaria with my long-time friend from Munich. The weather is very rainy and we take the opportunity to learn about the cultural heritage of Bavaria that goes back to Romanesque and Gothic times: The church of Sankt Georg at Ruhpolding, the chapel of Sankt Servatius auf dem Streichen, Sankt Valentin at Zell (part of Ruhpolding), Sankt Nikolaus at Einsiedl.

Not far from our hotel is the Church Saint George, nicely located on a hill above Ruhpolding. After the rainfalls, when the sun has returned on the last day of our vacation, I take this photo with the Sonntagshorn in the background. 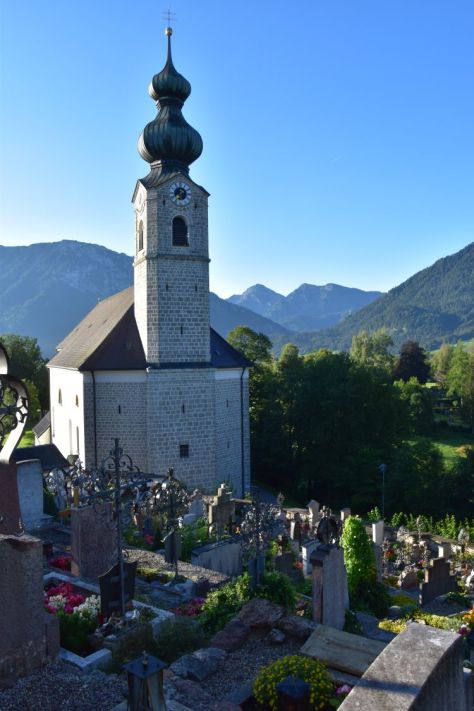 This church has the typical Bavarian Baroque or Rococo appearance, whereby the right-hand altar embeds… 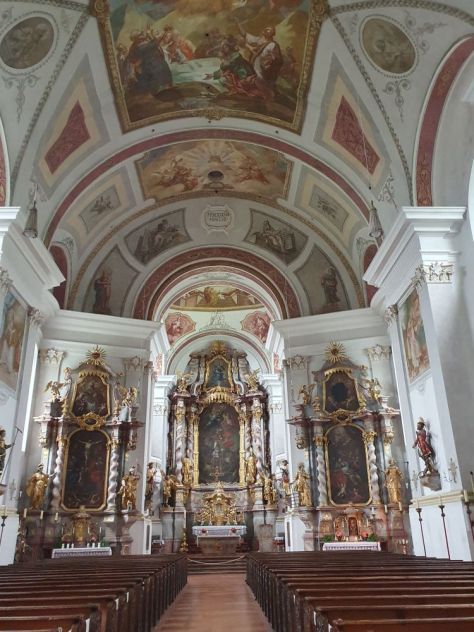 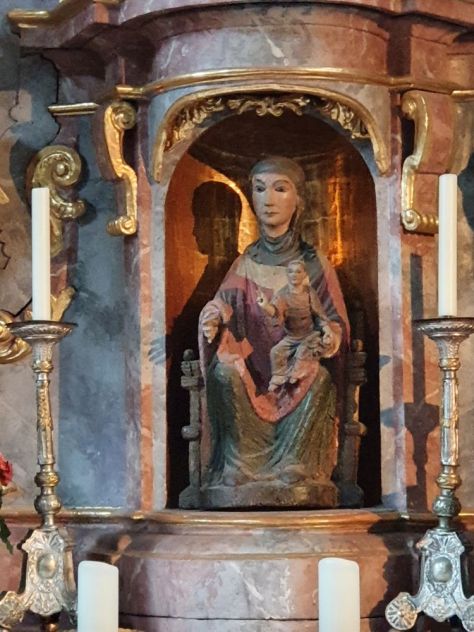 The people from Ruhpolding call her proudly the “Ruhpoldinger Madonna”.

It is drizzling, when we park our car close to the border between Bavaria and Austria, above the Schlechinger Tal. In the misty forest we walk uphill to the Chapel Sankt Servatius auf dem Streichen, located on a path for traders that transported goods from Bavaria (Unterwössen) to Tirol (Kössen). The attribute “auf dem Streichen” alludes to the trading traffic: “Streichen” is an older word for “Säumerpfad”, and “Säumer” or “Streicher” are the people transporting goods; “Säumerpfad” translates as mule track – the Anglosaxons seem to think of the mules on such  tracks.

Saint Servatius is an unusual patron in Bavaria. He was a bishop in today’s Netherlands (Maasland) that died in 384.

We reach our chapel Sankt Servatius in the mist. It is a mysterious atmosphere.

The booklet of the chapel, edited by Schnell and Steiner, assumes that the nave has been constructed in the 13th century, though the first records of the church appear only in 1440. At that time, the apsis was replaced by the more spacious choir with the rib vaults that we see today. In addition, the chapel was then decorated with frescoes that, with some changes in the 16th century, have been preserved under whitewash. It was a cultured and art-minded priest that initiated the uncovering of the frescoes in 1943/44. The stepwise renovation of the chapel was completed in 2014. Most of the windows in the choir are the originals; the glass roundels have been preserved.

An iron grating prevents visitors from entering the nave. We look at the precious frescoes of the nave from behind the grating. Above the entrance to the choir, I discern the annunciation scene with Maria and the Archangel Gabriel. The next fresco to the left shows Saint Leonhard, patron of the prisoners, with two prisoners whose feet are fixed in a block. Below, to the right hand side of the choir, the three Kings are visiting Christ after his birth. The writer of the booklet edited by Schnell and Steiner is of the opinion that this is the most precious fresco of this church. 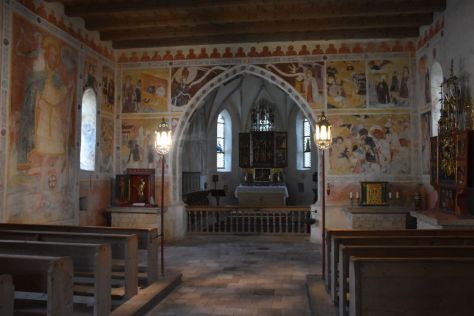 There are more frescoes in the choir, on the wall separating the choir from the nave. One of them illustrates the Last Judgment. We cannot see them.

Saint Christopher greets us from the sidewall; Jesus child sits on his shoulder becoming heavier and heavier. Christopher is the patron of the travellers, ready to be invoked here by those who once transported goods across this pass.

The altar in the choir was created in 1524. Saint Servatius is flanked by Saint Dionysius and Saint Wolfgang. It is interesting that Saint Dionysus or Saint Denis carries his head in his hands, but also has a head where it belongs. In Paris, he just has that one head in his hand, whereby sometimes the nimbus is around the head on his hand, sometimes above his headless body; he was bishop of Paris and was decapitated in the third century. Saint Wolfgang was bishop at Regensburg in the 10th century. 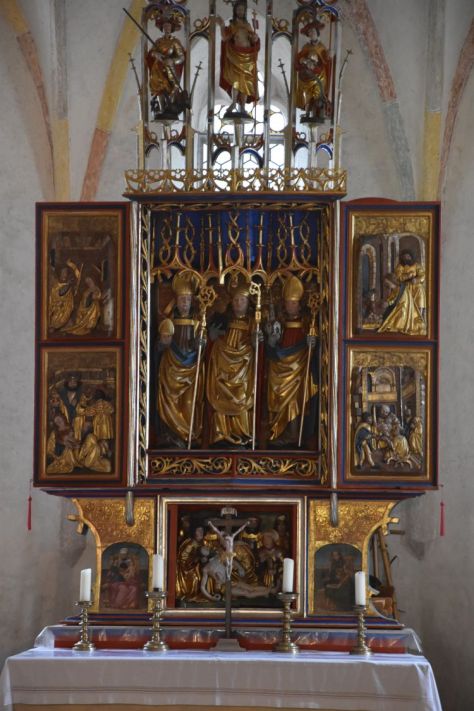 This small box altar (to the left of the choir, 1400) is deemed to be the most precious piece of art in the chapel. Only two of the eight figures can be seen, Sebastian (with the arrows) and Laurentius (with the grill). The figures are graceful, the style is called “soft gothic”. 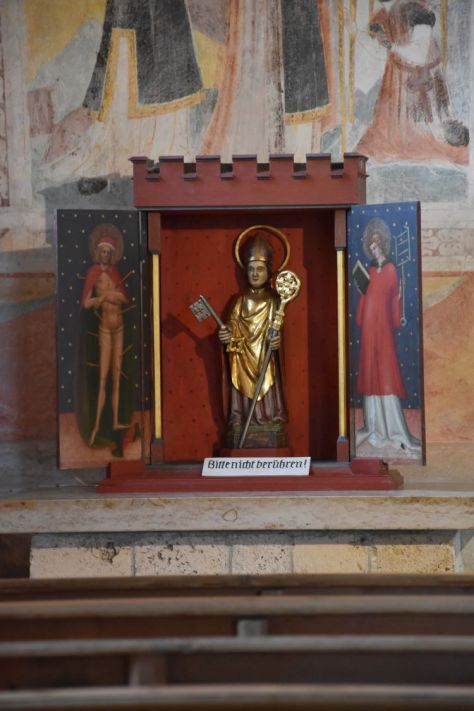 We enjoy this lonely solemn place in the middle of the forest and say farewell.

Below the chapel, there is a mountain inn that is closed today.

Ruhpolding and Zell have been unified to one village. Zell is proud of their church Saint Valentin.

The frescoes in the gothic choir are from 1450. They have been uncovered in 1955. Christ is in the middle.

In the altar we can see Saint Valentin in the middle, Saint Dionysus to the left (again with his second head in his hand like in the Streichen chapel) and Saint Conrad of Konstanz (his typical sign is the cup) to the right. In the wings are Saint Augustinus and Saint Zeno (the latter we have already met at Bad Reichenhall).

Looking back at the gallery with the organ, we can see the wooden ceiling that is still the original. the brochure says.

Also the church Saint Valentin has its Saint Christopher; the fresco is baroque, from the 17th century. 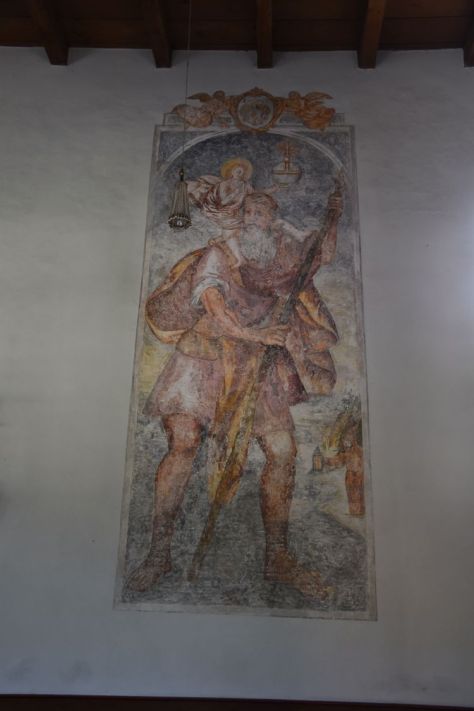 On our third day, the sky is brightening up, and we go for our first hike. We visit the nearby small church Sankt Nikolaus im Oberland in the hamlet Einsiedl. The church was built around 1200. Legend tells that a duke serving Barbarossa fought war against Salzburg and destroyed the city. This was too much. He should not have destroyed the city. Barbarossa banned him and sent him to this lonely place, where the duke built the small church dedicated to Saint Nikolaus and a farm.

The farm is called “zum Einsiedl” and the family living here looks after the church. The owners have a talent to cultivate flowers.

Wooden shingles cover the roof, the tower and one side of the church building.

Inside the church shows its original gothic habit. 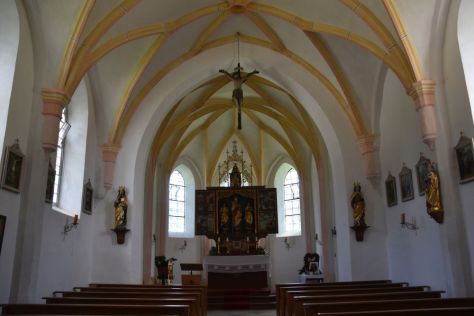 In the altar from 1940 are a figure of Saint Nicolas (around 1700) and Stephan (to the right) as well as Laurentius with the grill (to the left, both early 16th century).

The cross in the arch to the choir has been created in the late 14th century and renovated in 1997.

The booklet by Heinz Scholz mentions the old window from 1420 showing the Annunciation and the birth of Christ. We look for that window everywhere. We see a coloured window near the entrance to the church. My friend looks through the key hole of the entry on the gallery, but no, this is not this window. What has happened to this treasure?

Or have we just not been able to find it? Perhaps we should have asked the farmer? We will do so the next time.

This ends our tour discovering cultural treasures in and around Ruhpolding. On our last evening in Upper Bavaria, we enjoy the sun set from Maria Eck.

And on our fourth and last day in and around Ruhpolding we climb the Unternberg with a magnificent view of Ruhpolding.

We say good-bye to Ruhpolding and, after a swim in the small and chilly Tütternsee, we return to the traffic jams of Munich to celebrate the sixth wedding anniversary in the restaurant with the Venetian name “Canal Grande”.

One thought on “On the road: Following Romanesque and Gothic heritage in Oberbayern”

Insights on the road - this is what I am sharing. After having retired, I am on the road towards new business opportunities (consult & engage). I am also on the road discovering countries and people (travel spotlights). While on the road, life keeps surprises and insights (essays and élucubrations).